The only naturally-aspirated 911 left might just be the best one. Interior is starting to feel dated, but you'll forget all about it once you get moving.

9
View All Specs
Add a Review
HOCKING HILLS STATE PARK, Ohio — The 2018 Porsche 911 GT3 is an ethereal thing, a car unstuck in time. While everything is getting bigger and more complicated (the 911 included), the GT3 feels delightfully anachronistic with its naturally aspirated engine, six-speed manual transmission and relative lack of creature comforts like automatic climate control, adaptive cruise or keyless entry. It's a refreshingly simple machine, the exact sort of car I grew up worshiping in magazines and video games.

This 991.2 GT3 uses a race-derived 4.0-liter flat-six making 500 horsepower and 339 pound-feet of torque that spins all the way to 9,000 rpm. Power from the rear-mounted engine is sent solely to the rear wheels, gripping the pavement with a set of Michelin Pilot Sport Cup 2 tires. Beyond that, the car packs enhancements to the suspension and aero. For a more detailed breakdown on what makes the car tick, check out Senior Editor Alex Kierstein's first drive review and separate engineering deep dive. Suffice to say, the car's got grit.

But Detroit isn't where the GT3 belongs when I've got a weekend with it — potholes abound, the roads are straight, and it's flat as a cutting board. So I grabbed a friend with the same affliction for great-driving cars as myself — he has a Honda S2000 and an engineering job in the auto industry — and we headed to an area just southeast of Columbus, Ohio.

The Hocking Hills are about 300 miles from Detroit, a bucolic spot full of rolling hills and undulating roads you can spend all day lapping. Outside of a few cars or motorcycles driving by, the loudest noises are the birds flying overhead. You do have to keep an eye out for animals (I'm aware of someone driving a Jaguar who once "punted" an unlucky raccoon), but as long as you're mindful, you can get a car moving without getting into too much trouble. 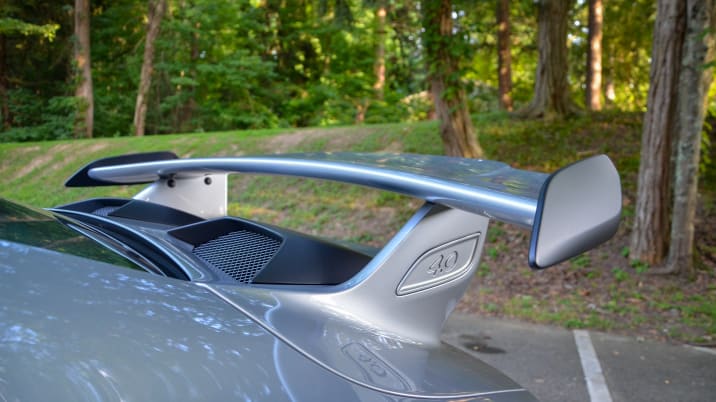 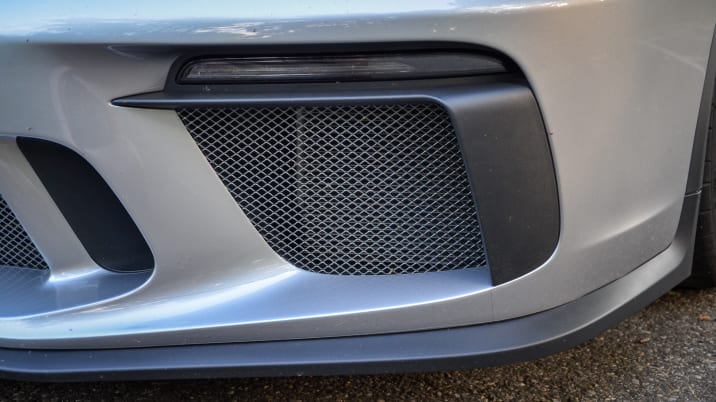 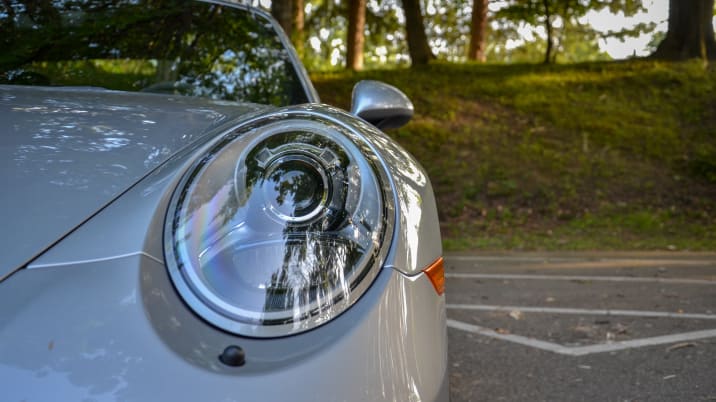 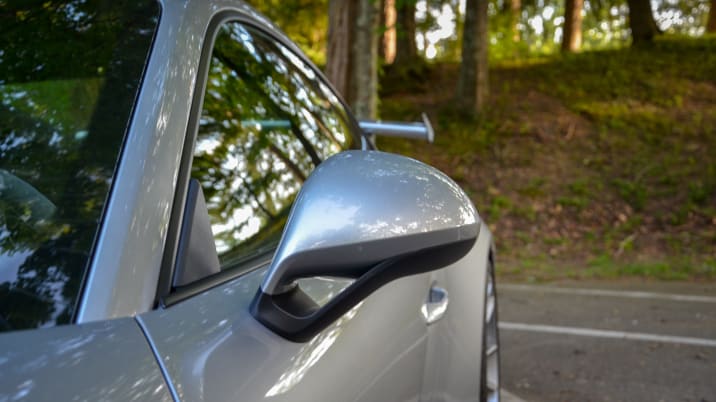 Given that the day was gorgeous, 70 degrees and sunny, and the Hocking Hills is one of the best places to drive within several hundred miles, I was afraid the roads might be packed. Other than a few slow-moving trucks, the roads were mostly free of traffic. Lucky us. And after a few hundred miles on the slab with nothing more than a few hard pulls on farm roads so far, I hadn't had the opportunity to push it. So we took a quick pit stop, piled intothe GT3, rolled down the windows, and hit the road.

The theatrics start the minute you turn the key on the left-hand side of the wheel. The engine roars to life then settles into a mechanical idle that telegraphs its racing roots with a lot of clicking and tapping. At full throttle, the exhaust is a firing line of six barely-filtered cylinders spitting out fire and heat and fury. There are no pops or burbles on overrun, just a sharp crack bouncing back from the surrounding trees as you move through the gears. It's drama and spectacle, and it's wonderful.


It's not just the noise, though. This might be the best engine in production today. Acceleration is fierce and immediate. Stab the throttle, and the car moves with a directness that no forced induction engine can match. Inputs seem to move straight from my brain right to the rotating assembly. The instant and linear hit of power is intoxicating and makes you lament the move to small-displacement turbocharged engines in other 911s. And the engine pulls harder as revs climb, really coming alive around 6,000 rpm.

Around Hocking Hills, the GT3 is brilliant. Turn in, and the car moves with an almost unnatural ease, thanks in part to the standard rear-axle steering, but also a healthy dose of old-fashioned chassis and suspension tuning. Like other modern rear-axle steering systems, the car can effectively shorten the wheelbase, allowing for tighter cornering. It's an odd feeling at first and might irk some drivers, but I got used to it.

The wheel gets heavier in your hands as the cornering forces build. It's firm, but you're corralling the car through a turn, not fighting it. Notes from every dip and bump the tires steamroll over is fed back up to your hands. Few other electrically-assisted steering racks are this talkative. It's a similar story with the brakes. Stab the pedal and the car scrubs speed with ease, even without the optional carbon-ceramic rotors. It's confidence-inspiring and easy to modulate. The light clutch is paired with a light shifter. Everything is so smooth and quick that each shift feels like one organic movement rather than several individual steps. 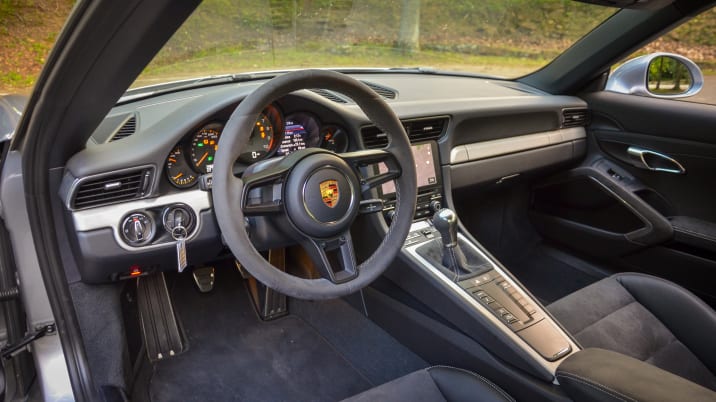 The driving position, perfect for heel-toe shifts and manhandling the wheel, reminds you that Porsche has 70 years of experience to draw on to get it all right. Since this is a no-option car, the interior was wonderfully spartan. The steering wheel is devoid of buttons or knobs (though there are four stalks on the column to make up for it). The center console is full of blanking plates for buttons that weren't there. Sure, I'm a sucker for things like red seat belts or an upgraded audio system, but those are wants, not needs.

The mid-engined 718 Cayman might have an inherently superior layout, but the 911 benefits from a lot of work Porsche has done over the years overcoming physics. The twitchiness, the snap oversteer of rear-engined cars of yesteryear has been dead for a while. The GT3 suffers none of these problems. Turn into a corner and you feel the steering load up and the weight shift to the outside, and at the exit nail the gas and trust that the car will have the grip you need. With all the weight out back, the GT3 hunkers down and pulls you out of a turn. Power down to the next corner, heel-toe and repeat.

You can watch the tach to shift (around 7,000 rpm if you don't want to bounce off the rev limiter), but — on a backroad like this where you're not worried about lap times — it's so much more enjoyable to listen and feel what the car is telling you through your ears and hands. When it comes to modern cars, it doesn't get much clearer than this.

I love how simple the GT3 is. Call me a curmudgeon, but cars today have too many drive modes with too much adjustability. I want it to be fantastic all the time, not just when you have the suspension and throttle and aero set just so. The only adjustment on this GT3 was for the Porsche Active Suspension Management (PASM), but honestly it's fine in Normal mode. Sport is too stiff for the road, and the GT3 works better with a bit of compliance. Really, the GT3 would be perfectly fine with a single-rate suspension. As Porsche GT head Andreas Preuninger told Kierstein, "It's stiff enough in Normal" for track work and likely too stiff in Sport for most American road courses. It's set up like a sports car of old, where it was firm enough to hold its own on a track but compliant enough to not kill you on the drive home.

Outside of the rear wing, you could almost call the GT3 subtle — no overwrought vents, winglets, or moveable aero on this thing. For those wanting something a bit more incognito, there's always the no-cost Touring Package. With or without the wing, the GT3 is still something special to look at. Anyone who calls the 911 design boring is plain wrong. 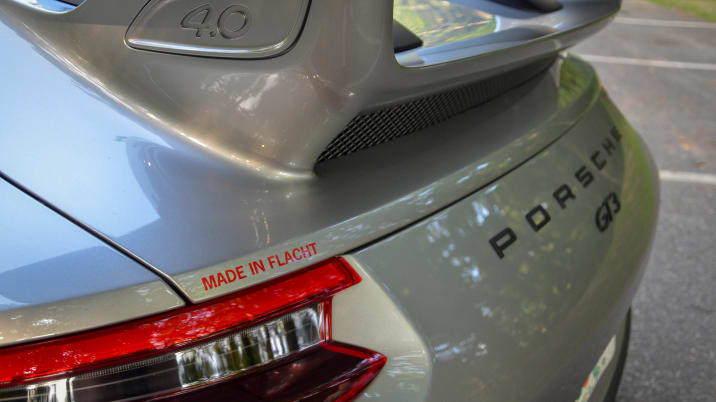 I spent all afternoon at Hocking Hills, and it was a reminder of what helped me fall in love with cars when I was young. The GT3 is so good, I wasn't concerned with going fast — you don't need to constantly push its limits to enjoy it. That weekend in the GT3 was the closest I've felt to a car in a long time, and there was genuine sorrow when I had to turn the keys back over on Monday morning.

Life's too short to drive boring cars, and weekends like that don't come around as often as they used to. These days, you have to visit your sick dad or work on the house or do one of a million other things that take precedence over putting a few hundred miles on a car over a couple of days. Time is something I took for granted when I was younger. The GT3 was a refreshing thing, an uncluttered and unfiltered device that reminded me why I fell in cars to begin with. The feeling is somehow both new and nostalgic. It's a modern throwback to the cars of my youth, before life was complicated and having fun was all I cared about.