Its quirks baffle, and its capabilities surprise

There are countless vintage car events around the world, but few that challenge man and machine with the elegant brutality of the Mille Miglia. The thousand-mile loop through Italy was once a flat-out race. In 1955, Stirling Moss and his navigator set a record time in a 300 SLR racecar, with an average pace of 99 mph through public roads and towns.

That record will forever stand uncontested, since fatalities in the 1957 race put the skids on unbridled competition, forcing it to re-emerge as a safer time-speed-distance event. I was fortunate enough to participate in this year's Mille Miglia in a Mercedes-Benz sponsored 300 SL, a roadgoing spinoff of Moss's 300 SLR. What's it like to pilot a famous Gullwing Mercedes worth upwards of $2 million through Italy for four days? Here are 10 things I learned about this iconic machine over 1,083 miles of driving. 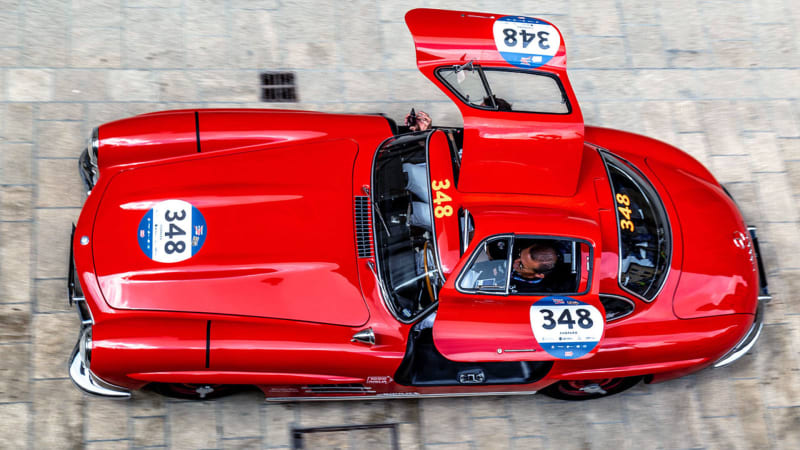 1. You should leave your jacket at home

The 300 SL was loaded with state-of-the-art engineering for the mid-1950s, but cabin cooling was not one of them. Heat emanating from the engine compartment combined with no A/C and poor ventilation makes the Gullwing rather toasty inside. The only salvation is removing the fixed side windows (via latches), pulling a latch below the dashboard for faint airflow, tilting the front quarter windows and, well, see below. 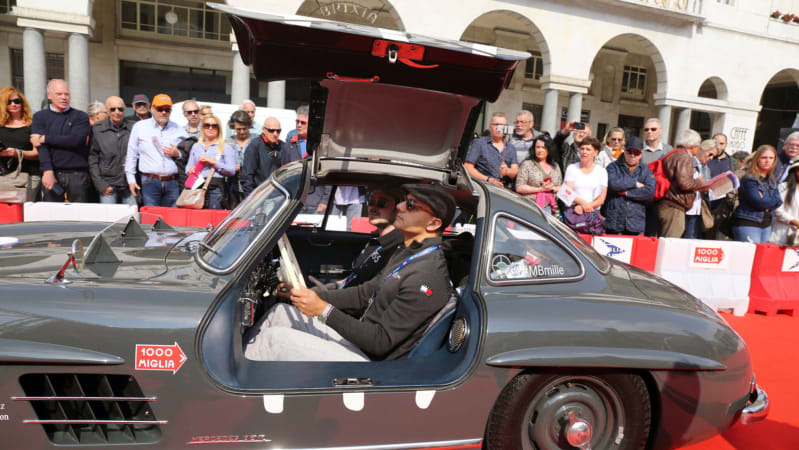 2. Driving with the doors up doesn't make you a jerk

Gullwing drivers have a habit of lifting the doors at low speeds, which invariably makes them look like insufferable showboats. But here's why you should hate the game, not the player: Driving a Gullwing with the doors up delivers a refreshing blast of cool air that makes it an all but irresistible practice. Plus, it does look pretty cool. 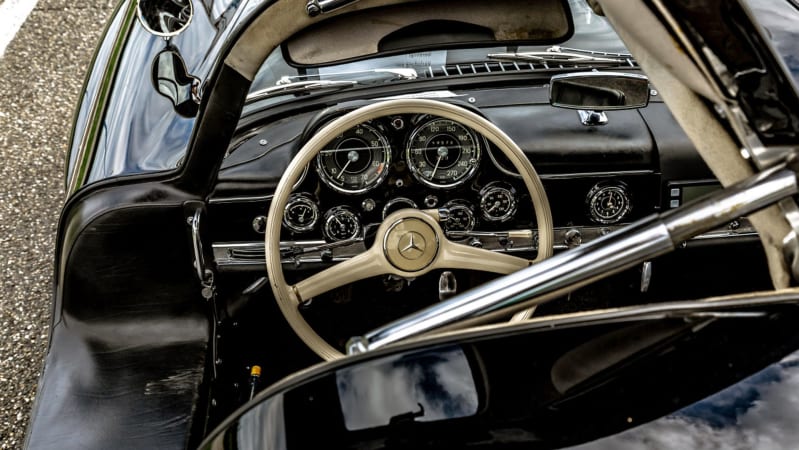 3. Ingress and egress are awkward at best

Just when you think you're going to look cool climbing into or out of the 300 SL, it has a way of putting you in your place. You see, the upwardly sweeping doors weren't used because they're a neat design element (though they undeniably are), the gullwings were incorporated because the 300 SL's tube chassis necessitated a tall door sill. That small, raised aperture makes it awfully awkward to access the cockpit, though you can find small solace in the fact that the Lotus Elise requires an even more humiliating entry and exit process. 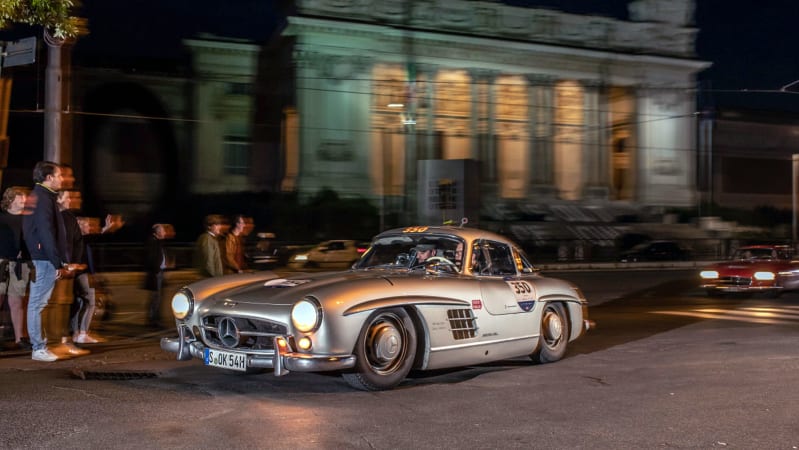 Just over 200 horsepower doesn't sound like much these days, but in 1955 it was a boatload, something I realized when driving among a field of then-swift period cars that included Porsche 550 Spyders and Alfa Romeo Giuliettas. Coupled with a curb weight of less than 2,900 pounds, the 300 SL was surprisingly quick compared to its contemporaries. 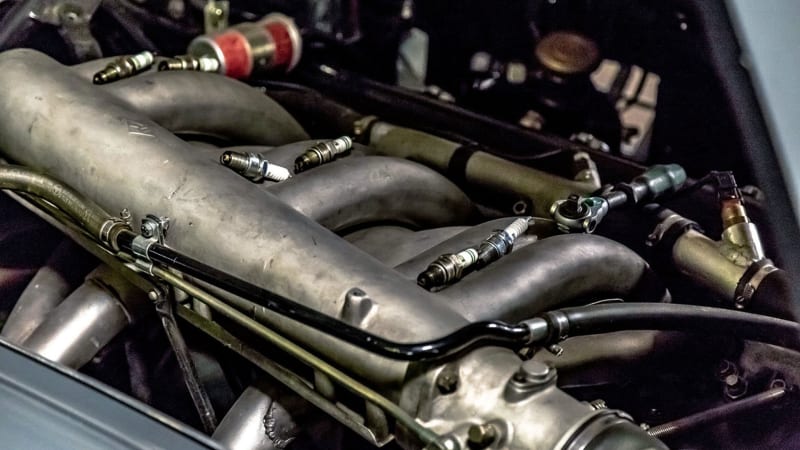 The 300 SL benefited from trickle-down technology from race cars, and one of the most clear connections came with the powerplant. Though the direct-injected inline-6 didn't have the 300 SLR race car's desmodromic valves, it still managed to come alive above 4,000 rpm, at which point it was considered "on cam" and eager to rev to its 6,000 rpm redline. 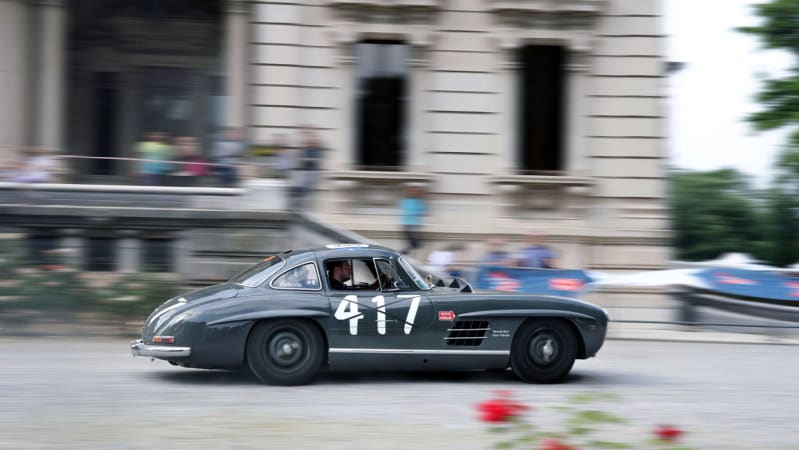 6. Four-wheel drum brakes are imperfect ... but better than you think

You'd think the 300 SL's front and rear drum brakes would be ill-equipped for stopping this beast from Stuttgart. Sure, they fade after serious hard stops, but they hold up better than you might expect. One interesting side note: I requested that the mechanics re-do the brakes overnight because I was concerned they might be on their last legs, and the fresh brakes pulled hard to the right when stabbed, a tendency which diminished once they were properly seated. 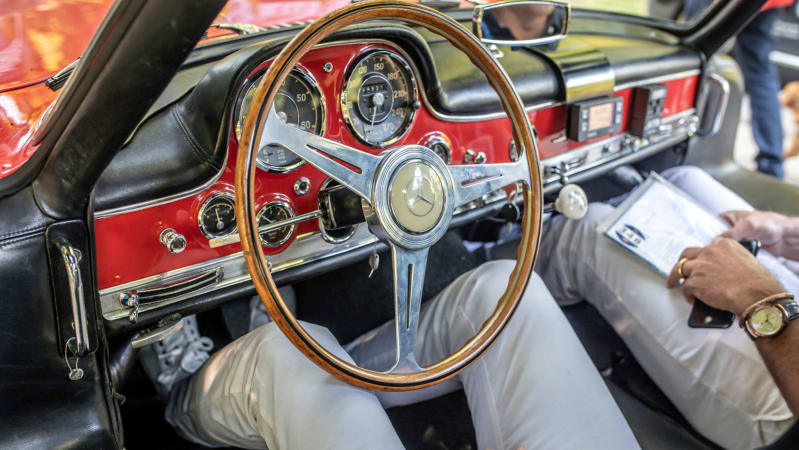 7. The interior switchgear looks cool but is a dark mystery

As sweet as the unlabeled toggle switches, dials, and sliders look against the 300 SL's aluminum-trimmed dashboard, it sure is difficult to remember which does what. Reserve fuel pump? Pretty sure it's right there next to the speedo. Instrument lights? That button just below, I think. Windshield wipers? Uh ... 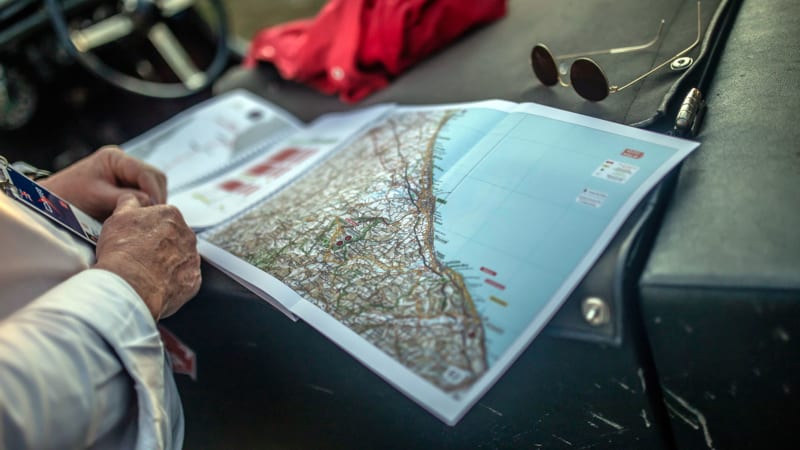 8. Your passenger won't have to reach over to honk the horn

One small metal button's function is easy to remember, mainly because it stands alone on the right side of the dashboard: the passenger horn button. That's right, your co-pilot can honk the horn from the comfort of his or her perch, a design feature incorporated so navigators could alert free-roaming animals (or race fans) of the 300 SL's impending arrival. 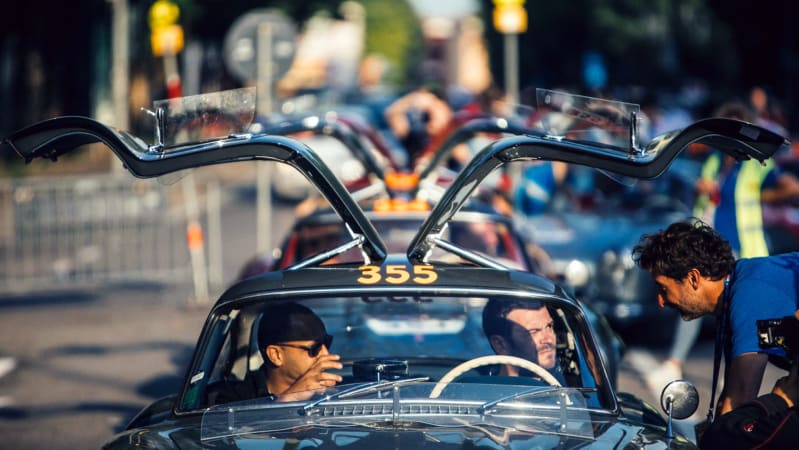 The only mechanical hiccup I experienced in the Gullwing occurred when it started running rough and misfiring. A quick diagnosis by Mercedes-Benz mobile mechanics revealed three fouled spark plugs. "These cars don't like to idle," one expert told me, and he was absolutely right: After the plugs were replaced, the 300 SL ran like a charm. 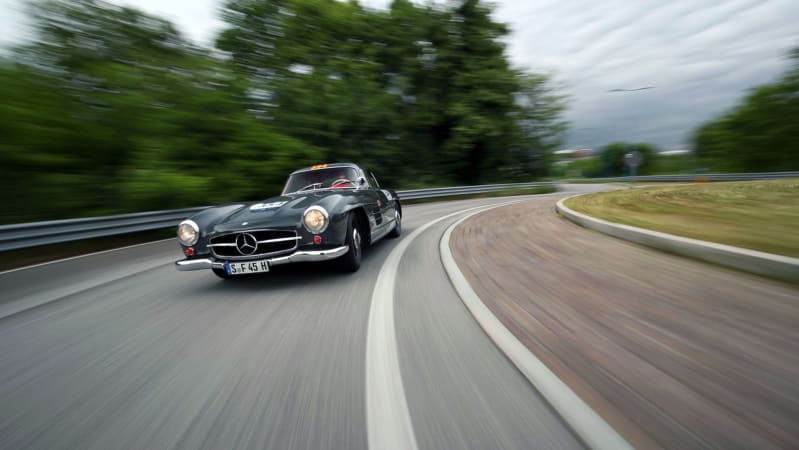 10. They handle better than you expect ... until they don't

Gullwings have a reputation for sketchy handling, and not without just cause: Their rear swing axles were inherently flawed, and had a tendency to punish mid-corner corrections with snap oversteer. However, the 300 SL's grip levels are surprisingly high, which means you can hurdle the two-seater into a corner and maintain relatively high speeds. Just don't do anything foolish like stab the brakes or lift the throttle abruptly, or you might find yourself inflicting serious damage on your seven-figure steed. 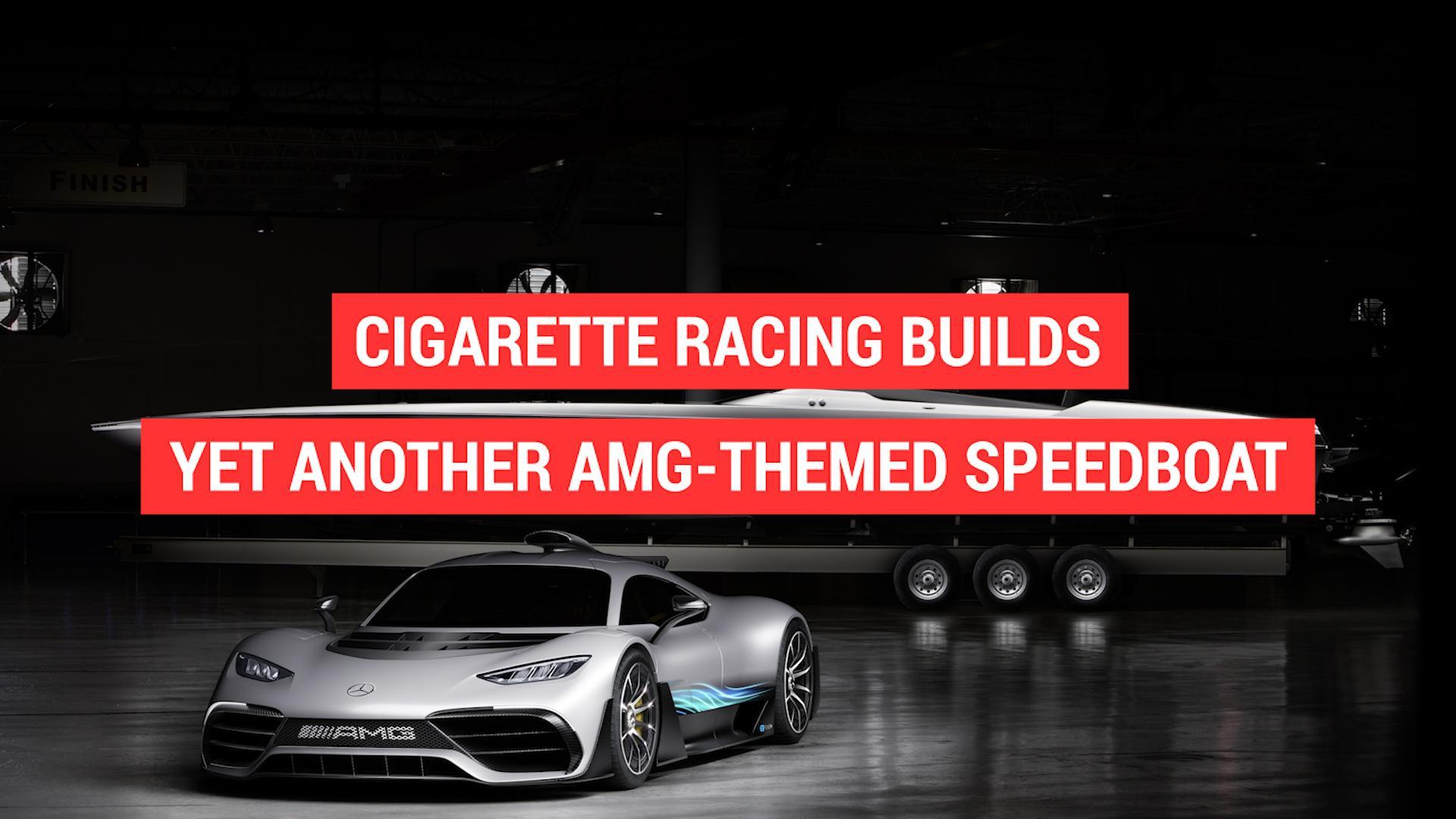