A Corvette with more storage. What's not to like?

I leave the house disappointed. My dog doesn't fit. I'd seen photos of the 2017 Callaway Corvette AeroWagen and had high hopes that Bo Darville, my 60-pound Flatcoat Retriever, could stand up in the car's expanded cargo area. It is a wagon, or a wagen, after all. Not even close, although your Chihuahua or small Labradoodle will fit just fine.

Callaway calls the AeroWagen a shooting brake. The company reminds us that the term was developed by the British for vehicles modified to carry shooting parties and their gear. More recently the label has been attached to high-performance GT coupes like the Ferrari FF and subsequent GTC4Lusso. But the CEO and founder of Callaway Cars isn't interested in hauling guns, or apparently dogs. His passions are cars and golf. "The C7 design is a natural platform for this shooting-brake approach," says Callaway, whose father Ely created Callaway Golf in 1984. "The luggage space in the car is already best in class. But now we can carry three full size Callaway golf bags. Is there another 200-mph GT car that can do that?" 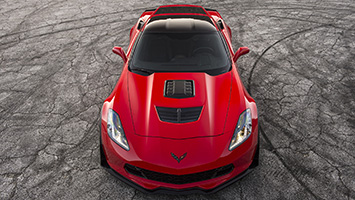 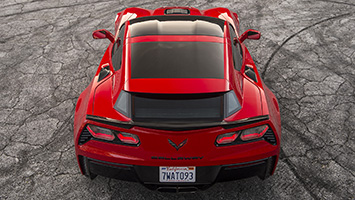 I fire up the Callaway's supercharged 757-horsepower 6.2-liter V8 and head for Malibu and the Santa Monica mountains. PCH to Los Flores to Ramble Pacifico to Schueren to Stunt to Mulholland, past the Rock Store, through The Snake, down Kanan, back to PCH . It's the route. And it makes everything better. An hour later the Corvette's carbon-ceramic brakes are red hot, the contents of its gas tank have been burned and I'm happy again. This car is scary fast.

No surprise, scary fast Corvettes have been Callaway's business for 30 years. In 1987 the company, founded by Reeves Callaway, struck a deal to sell C4 Corvettes with twin-turbo engines, NACA ducts and a full GM warranty through Chevy dealers. The cars were ordered under RPO B2K and bumped the sports car's L98 tuned port 5.7-liter small block from 235 hp to 345 hp and 465 pound-feet of torque. Those weren't big numbers in 1987, they were colossal. Remember, the ZR-1 was still three years away, and the Corvette team needed something to fight off the 245-hp Buick Grand National and the 547 GNX models Buick was about to unleash with 276 hp.

A year later the company built the fastest street-legal Corvette ever. It went 254 mph, so to play with AMG's Hammer, a tuned midsize Mercedes W124 that was the world's fastest sedan, Callaway called its car the Sledgehammer. Along the line Callaway switched to supercharging, as well as spreading out to Camaros, trucks, and SUVs. Today Chevy dealers will gladly order you a blown Corvette, Camaro, Silverado, Tahoe, or Suburban pumped up by the company's GenThree Supercharger and TripleCooled intercooler system. Backed by a Callaway warranty plus the GM factory warranty, of course. 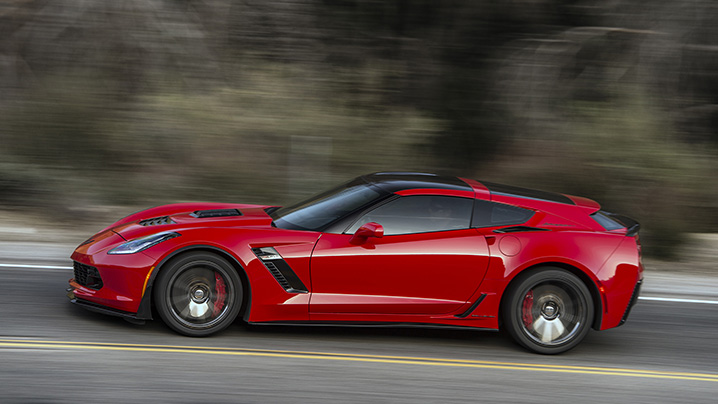 According to his son Pete Callaway, General Manager of Callaway Cars West in Temecula, California, Reeves Callaway wanted to build this AeroWagen for many years. The idea has certainly been around a while. In the late 1970s Corvette racer John Greenwood, known for his wild customs, built the Corvette Sportwagon. Kits to convert your Corvette were then sold through Eckler's Corvette Parts, or they would build one for you. Even GM has played with the notion on its Pontiac Firebird, building two concept cars, the 1977 Pontiac Trans Am Type K Concept and the 1985 Trans Am Kammback.

But it was the Bertone Jet 2+2 Aston Martin Rapide Shooting Brake at the 2013 Geneva show that inspired Callaway. He returned to his headquarters in Old Lyme, Connecticut and started working with designer Paul Deutschman, first sketching the shape on a C6 Corvette. They wanted to change the look and feel of the car, but a complete rebody was too complex and simply not cost effective. It quickly became clear that if production was to become practical a single body panel replacement was the way to go. They basically decided to replace the decklid.

It works. People look at this thing like it's from the cosmos. When they ask it's fun to say, "No, it's from Temecula." Even the gaggle of superbikers loitering at the overlook just past The Snake stopped what they were doing to watch me cruise by. One guy, on a Yamaha R1, even gave chase, catching up at Kanan for a closer look. I appreciated his gloved thumbs up. 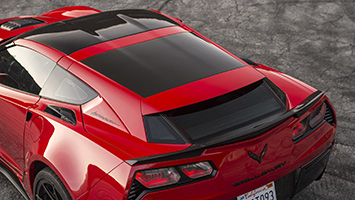 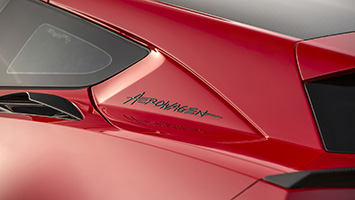 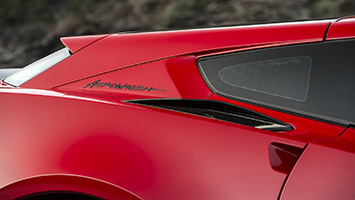 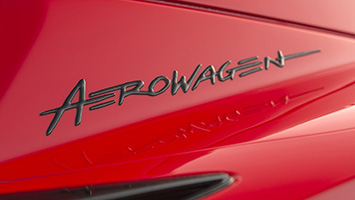 The conversion is available on any C7 Stingray, Z06, or Grand Sport. It costs $14,990, which includes painting and installing the new hatch, as well at adding a new carbon fiber rear spoiler and replacing the car's halo bar between the hatch and the roof panel for a smoother transition. Callaway had access to GM's CAD data. It shows. No fabrication is required. Workmanship, fit and finish are OE quality.

Made from carbon fiber and tempered safety glass, Callaway says the new panel weighs essentially the same as the factory unit. It mounts to the factory hinges with the same hardware and there's an embedded rear defroster. Rear visibility is compromised slightly by the two additional pillars in the rear glass, but the difference is hardly worth mentioning.

Our test car started life as a Z06 with the lethargic eight-speed automatic. In addition to the AeroWagen Package, Callaway has fitted an Eaton TVS2300 Supercharger. The 2300cc unit is larger than the 1740cc supercharger GM installs on the Z06 and it makes more boost, just under 14 psi. The stock unit generates about 12 psi. According to Pete Callaway, the larger rotors also allow the unit to spin slower and generate less heat. 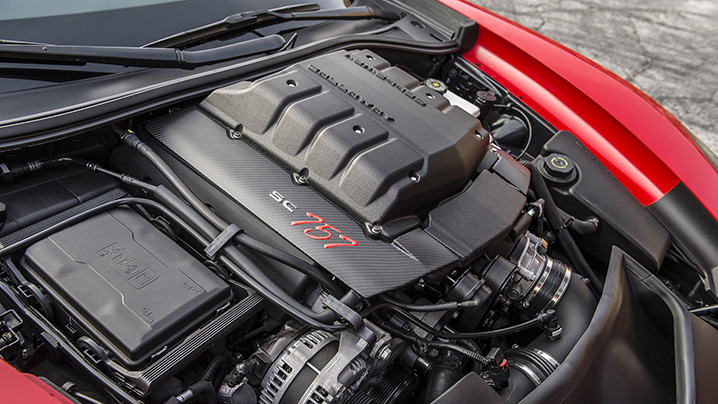 Three integrated air-to-water intercoolers keep the intake charge cool, one on top of the rotors and one on each side. The intake charge is first pushed up by the supercharger through the top unit and then, after a hard right or left turn, down through the secondary intercoolers before being rammed through the larger ports of the new intake manifold. The water-to-air heat exchanger mounted in the nose of the car also gets a new higher capacity pump.

The new blower unit is so big, partially because of the stacking of the rotors and intercooler, it doesn't even fit under the hood. Callaway slices a hole in the factory carbon fiber hood and installs a black surround to cover the cut lines. It's a clean installation and you can see the top of the Supercharger quivering out in the wind from the driver's seat. It's all very Mad Max and that alone is worth the $18,495 price tag. It's the duck's guts.

Callaway says the supercharger, along with a PCM reflash, takes the V8's power from 650 to 757 hp and torque from 650 lb-ft to 777. Enough, says the company's literature, to run the quarter mile in 10.5 seconds at 131 mph. It sounds good too, with just enough blower whine to be heard but not enough to get annoying, even on long drives. I can say the same thing about the amplified bellow from the stainless Callaway Sport exhaust with its two Double-D tips. It's a $2,995 option. 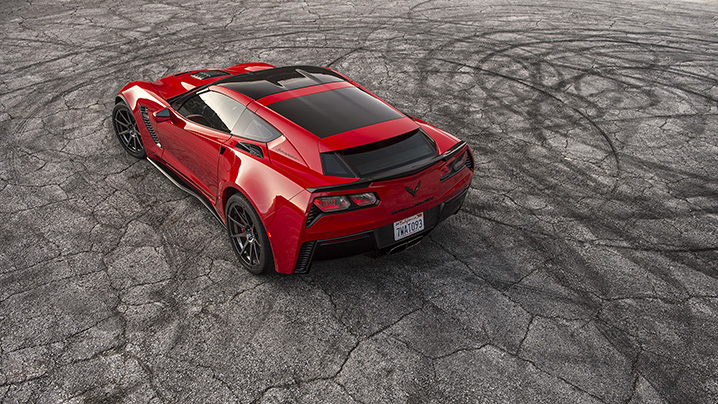 In the hills it's a Z06 with more oomph, there's no change to the cars balance or response. Callaway doesn't touch the suspension, brakes or tires. Although our Torch Red tester did wear Callaway's forged Nine-Spoke black chrome wheels, which cost an additional $6,280. Total sticker price for our fully loaded example was $151,000, including the loaded Z06 with the Z07 Package that Callaway started with.

Drivability is excellent. There's no surging, no peaks or valleys in the power curve. And full throttle is all-out war. Nail it off idle with the traction control off and the massive Michelin Pilot Super Sports go up in smoke. No bombshell there. It's the Corvette's traction problem at 50 mph that surprised me. The first time I hammered it at 50 mph I wasn't quite ready for the resulting violence. The automatic transmission dropped a handful of gears and those big rear tires lit up and stayed lit until the next upshift. When the rubber finally grabbed the asphalt, the AeroWagen dug in took off for triple digits like a jet-powered Russian locomotive ( Google it).

All I really remember about the thrill ride is my wife screaming. She wasn't amused. I was laughing like Tom Hanks in Moneypit after the bathtub falls through the floor.

My dog would have loved it.