I drove the Nurburgring's Karussell corner in Los Angeles

And you can too! Porsche sure likes its P initialisms. You've got PASM for the suspension, PDK for the transmission, PSM for stability control, and PCCB for carbon-ceramic brakes. Here's one you might not know: PEC, which stands for Porsche Experience Center. With Monday's opening of a Los Angeles PEC, there are now two in the US. Porsche's Atlanta HQ got one last year, but LA gets the better track and it has to do with a German import.

This is an unlikely location for speed. This 53-acre complex is situated where the 405 meets the 110, byways that are known for allowing a lot of people go nowhere fast. I'm told the spectacle of Porsches running around in circles just off the highway has caused more traffic here. (And this just across the highway from where the Goodyear blimp makes landings. Angelenos are so jaded.)

That free advertising by virtue of location is going to get a lot of people interested, and we can tell you the PEC is worth taking the exit for. In addition to being the new home of Porsche Motorsport North America, the Experience Center is a playground with all sorts of attractions built for specific driving exercises. There's the low-friction stuff, like a wet skidpad, a polished concrete handling course, the ice hill (outdoors, year-round, in California – it's a simulation), and one of my personal favorites, the kick plate – when you drive over this contraption and onto a wet skidpad, the plate shifts the rear wheels one way or the other and it's your job to correct and keep the car from spinning. Even when you know it's coming it's still a challenge.

An off-road area lets visitors mess around in Cayennes and Macans, and the handling course was built more for the cars with numbers in their names. Porsche says it's not a race track, it's more like the best country road you'll ever drive – okay, but when's the last time you saw a country road with curbing and brake markers? If you want to set a lap time on the course, you'll have to do it indoors on one of the simulators Porsche has loaded with the CAD data from here and lots of real-life race tracks. 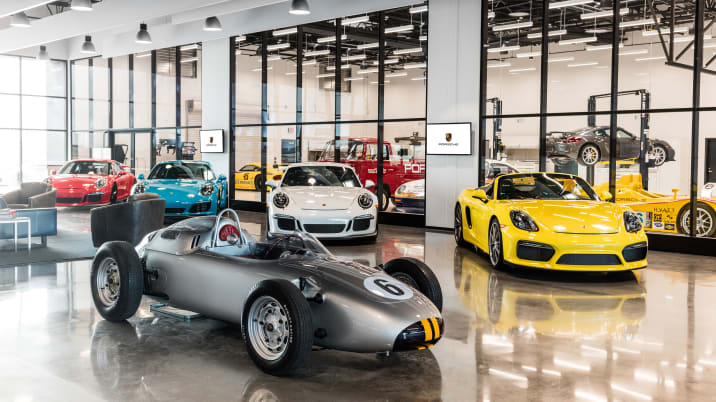 And speaking of, it's the strip of asphalt running alongside the 405 that really got my attention. You drive to one end, turn around and come to a stop. Mash the brake, then the gas, then let up on the brake and whatever Sport Chrono-equipped Porsche you're driving does a launch-control start down the three-quarter-mile runway. Very soon you're going much faster than those poor rubes on the 405. Hit the brakes to scrub some speed and then you're driving on a little piece of Germany brought to the US. It's a replica of the Nurburgring's Karussell corner.

And because this is Porsche and they don't mess around, it's an exact replica, down to the 33 percent banking that lets you dive in and accelerate while the centrifugal force presses the car into the tarmac. Everything about that tarmac is Nordschleife-correct, save one thing: there's no graffiti. That needs to be remedied, and there's no lack of talent in the area. But even without road markings, this is an experience you won't get anywhere else in the States – not even the PEC in Atlanta.

Packages include 90 minutes of track time and start at $385, which grants you (ab)use of a Macan S; the cost increases relative to price and power. There are a few interesting packages that let you sample a pair of cars, like a 911 Carrera with a Carrera 4, mid-engine (718) versus rear-engine (911), or the 911 Turbo against the GT3. There's even a class for those who need to brush up on their manual-transmission skills, starting in a Carrera S and graduating into a Cayman GT4. Because you earned it.

If you're in LA, at least stop and look around, maybe get something to eat at the cafe or restaurant. Once you're there you'll probably book a slot, and once you've done that you might just want a new Porsche. This is marketing that works – it's easily the most effective car commercial you'll ever drive by and likely the best one you'll ever drive.