Noah Joseph
Even for a Rolls-Royce, $750,000 seems like a lot of money. But that's how much one customer paid this past weekend for the privilege of acquiring the very first example of the new Dawn convertible. And we're glad to report that the the money is going to a good place. 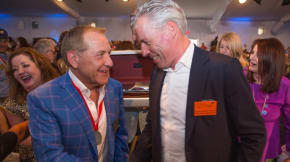 Rolls-Royce introduced the Dawn this past September at the Frankfurt Motor Show as the convertible counterpart to the Ghost sedan and Wraith coupe. It's set to take on the likes of the Bentley Continental GTC and Mercedes S-Class Cabriolet, packing a 6.6-liter twin-turbo V12 good for 563 horsepower and 575 pound-feet of torque up front and a folding fabric roof over its four-seat cabin. The company's Bespoke division set up this particular example in Andalusian white, with a deep red roof, red coachline, and a corresponding interior in red and white with Indian rosewood paneling and special treadplates.

Valued at over $400,000, the vehicle was donated for the charity auction at the Naples Winter Wine Festival held this past Saturday to benefit the Naples Children & Education Foundation. The winning bid of $750,000 was placed by insurance mogul and hedge fund manager Julian Movsesian, pictured inset at left with Rolls-Royce CEO Torsten Müller-Ötvös. He'll take delivery in April from the dealership in Naples before anyone else gets theirs. Over the same weekend in Arizona, an Acura NSX sold for $1.2 million, a COPO Camaro for $300k, and Jay Leno's Harley-Davidson edition Ford F-150 for $200k – all of them the first of their kind, and all benefiting charitable causes.

Show full PR text
Rolls-Royce Dawn Raises $750,000 For Children's Charities As The Brand Marks A New Era With The Most Social Rolls-Royce Ever

It is one thing to bid on a prize as rare as a Bespoke Rolls-Royce and quite another to bid on the once in a generation opportunity to be the first owner of the newest member of the Rolls-Royce Motor Car family, the all-new Dawn. On Saturday, January 30, 2016, a winning bid of $750,000 secured this honor for an avid car collector as he became the first owner of the most sought after motor car on the market and a generous benefactor of the Naples Children & Educational Foundation. Dawn was the highlight of the Naples wine auction this past weekend which raised $11.1 million for the local charity.

All proceeds from the Festival support the Naples Winter Wine Festival's founding organization, the Naples Children & Education Foundation (NCEF), which has given out annual grants to more than 40 nonprofit agencies and has impacted the lives of about 200,000 children. "Over the past decade, Rolls-Royce Motor Cars has worked closely with many owners to raise millions of dollars for local charities. It is entirely befitting that the first new Dawn is born into such altruistic company," said CEO Torsten Müller-Ötvös.

Unveiled last September in a breakthrough digital launch, Dawn has been heralded as the "sexiest Rolls-Royce Motor Car ever offered." Excitement for the new Drophead Coupe has been exceptional with the first model year already being fully subscribed. The most social of super-luxury drophead motor cars, this exquisite motor car – commissioned specifically for this moment – boasts a stunning Andalusian exterior finish with a Deep Red roof, offset by an Arctic White and contrasting Consort Red interior appointed in the finest quality leather in the world. The vehicle is finished in full Santos Palisander Canadel Paneling - a handcrafted finish of open pore Indian Rosewood - covering the front fascia, doors and wrapping onto the back deck. Bespoke Treadplates commemorate "Build No.1 for Dawn in North America."

The first Dawn will be delivered in April of this year through Rolls-Royce Motor Cars Naples Florida. First customer deliveries of Dawn globally will follow immediately.
X