Just how far-fetched is Faraday's Future?

We Can Scoff At The Outlandish Concept, But What's Real And What's Possible Here?

Faraday Future started off the 2016 CES week in Las Vegas with a highly promoted event to reveal the FFZERO1. The 1,000-horsepower, single-seat electric sports car concept was just the perfect kind of vehicle to tell the world you're not at all serious about changing transportation, no matter how many times you might say those words during the unveiling. But, while those of us in the gala tent on that rainy Nevada night poked a lot of fun at the absurdity that is the FFZERO1, the truth is that what Faraday Future ( FF) is talking about is only partly hinted at through the giant bubble windshield.

In informal discussions with a few long-time EV supporters at the event, I heard a surprising amount of positive comments from people who saw beyond the outrageous concept vehicle on display. One key point they mentioned is the strong support that LeTV, a giant online presence in China that is owned by Faraday backer Jia Yueting, the 17th richest person in China, could give FF. The longtime EV industry observers I spoke with off the record pointed out that LeTV could be the first company to bring the app-store economy to a vehicle. Behind the vague promises from the stage about how Faraday is going to change transportation as we know it, they said, there's an automotive company being pushed by a digital content company. Whichever company manages to integrate microtransactions – the kind that we're used to on our phones – into the automobile will truly carve out a new type of transportation economy. Want that new themed icon in Waze? Hit a button on the dashboard. Think you should be able to put your favorite in-dash parking app or your preferred podcast player on the infotainment screen? The LeTV car app store could have you covered. Sure, any automaker (or Apple, ahem) could do this, but no one has yet. Since LeTV is the driving force behind the Faraday scenes, FF could be the automaker that makes it a reality before any one else. That's how these insiders saw it anyway. 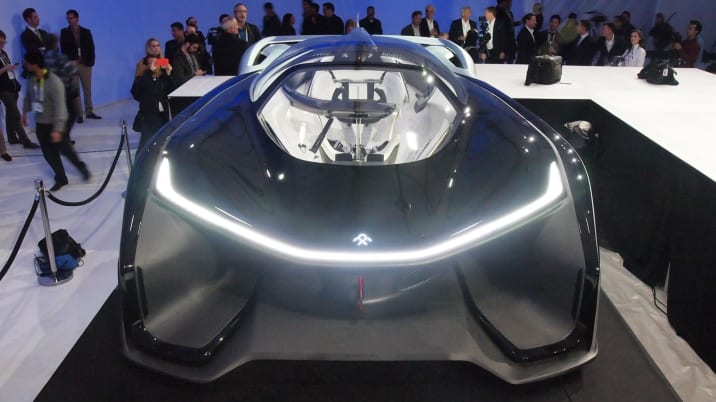 I also spoke with two representatives from FF: Ezekiel Wheeler, product and tech communication specialist, and Richard Kim, FF's head of design. They didn't mention anything about an app store built into a FF car, but tell me you don't hear that possibility here. Wheeler said that Faraday Future is aiming its upcoming production vehicles at the same people who line up at an Apple store when a new iPhone or iPad comes out. "The tech community is huge for us because of the pace that we want to move and the connectivity that we're integrating," he said. "Entertainment is also a big factor in that, obviously, with LeTV partnerships and making sure that we encompass an entire gamut of a person's life and make it as seamless as possible from the time they wake up to the time they jump in the car to go to work to the time they come home to when they're enjoying time with their family."

Wheeler also said that there was a reason FF debuted the FFZERO1 at CES, a tech show. After all, we just had the Los Angeles Auto Show and Detroit starts next week, so it's not like there weren't other options. Wheeler said that FF wants to get away from the conventional thinking that defines an auto company and act more like a tech company. "The buzz that we've created in the short amount of time that we've been a company, it kind of made sense in 2016 and the pace that we're going, that this show was the right fit for what we wanted to announce to the world," he said. 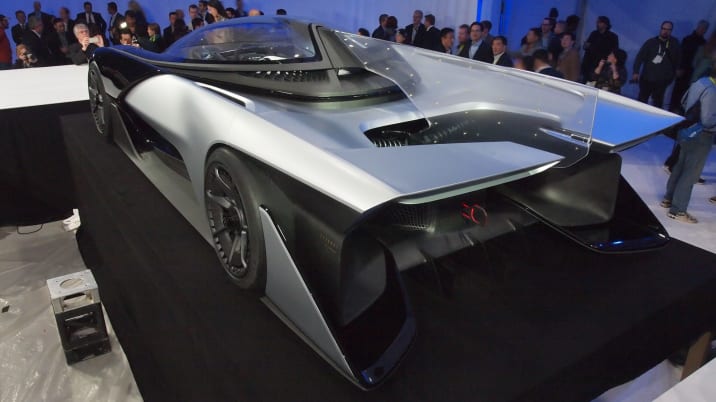 During his on-stage presentation earlier in the evening, Kim said that the reason that we got to see the FFZERO1 on stage in Vegas at all was because of a sketch he drew that was sitting on his desk and caught someone's attention. That happened in August, he told me, and it only took FF a couple of months to build the physical car. The concept is not able to drive, but Kim said that the design for the FFZERO1 is "all packaged and road worthy." He added that the FFZERO1, in the shape that we saw Monday night, will indeed be road tested. "Our systems are on the road as we speak," Wheeler said. "We're beta. Our battery systems are on the road, our motors are on the road, our chassis are on the road." The FFZERO1 isn't out there yet, but Wheeler said the car is, "something that the company is taking very seriously to test not only our systems but also what we can do with it."

Of course, the FFZERO1 is here to make a statement and right now it screams "NEW." "We don't have a history. We don't have a legacy. We don't have a brand. Yet," Kim said. "So we were exploring to find our DNA. We had to find all our core values, we have to understand the platform technology. We used this use case, based off a simple sketch, to explore and discover form language and understand aerodynamics. These are the things that, since we had this car going parallel to our first production car, it just helped us."

Speaking of the production car, Kim said that its design is all done, but neither he nor Wheeler would offer up a timeline for when it will be revealed, other than "soon." Wheeler said that if you want to make a guess as to when we'll see it, it makes sense to look as how fast the company has moved to get the concept to the stage and that, "we have an aggressive plan in the next couple years to have something available to the public, and you can kind of guess where we're going to end up really, really shortly."

To get to that point, FF is testing a number of vehicles on the road, but I got no details about how many there are or where they're being driven. I did ask, of course, but only got a "hmmmm," in response from Wheeler before he said, "It's a healthy number for us to be in an advanced state to not only secure suppliers but also to make sure we're on track to meet the deadlines that we've set." Where, I wondered? "In the normal areas," he said, but confirmed they are being tested in the US. So, whatever the future brings, it's happening here.