Turbo Makes The Base Better View All Specs
When Lexus revamped its IS sedan for the 2014 model year, the car polarized in terms of design, and offered bipolar driving experiences, trim to trim. The entry-level IS 250 used a 2.5-liter V6 that felt like a lightweight for the segment. The stronger 3.5-liter six, especially when tied down to a car with the F-Sport package and subsequent handling improvements, was more of a sporting thing.

Thankfully, Lexus has replaced the base powerplant for the IS with an up-to-snuff turbo 2.0-liter four. I drove the newly christened IS 200t for a week – with that enhancing F-Sport pack – and found it to be a vast improvement. Modest-budgeted buyers with eyes for Lexus' edgy styling seem to be in good hands.


If you enjoy, or at least don't mind, the strong styling choices Lexus has made with this IS (inside and out), the car acquits itself reasonable on the road and on paper. You'll save a few thousand versus the asking price for a comparable 3 Series or C-Class, and the whole Toyota/Lexus reliability reputation helps out, too. Easy to drive, quick, and painless – the IS 200t might not be an enthusiast's first choice, but it'd hardly be a wrong one. 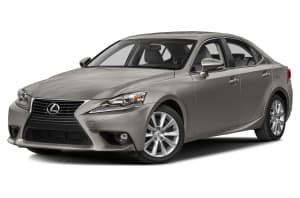