A light mist falls on the Circuit Mont-Tremblant. Looming gray skies threaten that more wetness is in store. I'm already nervous about scooting a tiny Nissan around a challenging course in rural Quebec. This damp chill isn't helping.

It's an unlikely day to drive an improbable racecar: the Nissan Micra, one of the smallest and cheapest cars sold in Canada. Luckily, the weather and my trepidation ease up. Laps around this gorgeous road course prove to be a lot of fun. The Micra isn't a bad little car, and racing them, well, that sounds like a riot.

Nissan is using the time-tested tool of motorsports to raise the profile of its new subcompact with the Micra Cup, a spec series that launches with a pair of races the weekend of May 22-24. It will be followed by five more weekend doubleheaders through the summer and into the fall, including a support race before Formula One's Canadian Grand Prix in June. The investment for Nissan is low, and the six races will all be run in Quebec, a province with a European level of motorsports fervor. 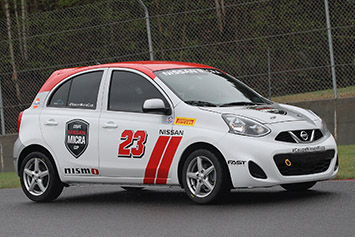 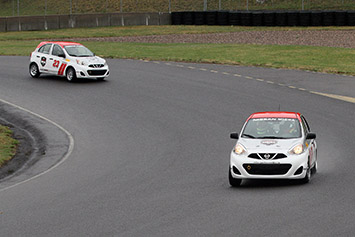 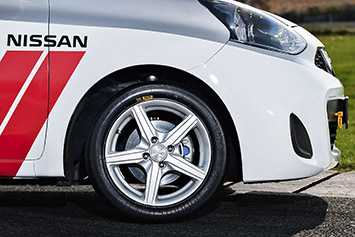 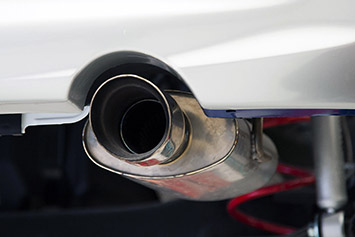 Despite the damp conditions, I'm eager for my turn to wheel the diminutive Micra around the Circuit Mont-Tremblant, a 15-turn, 2.65-mile course nestled in the Laurentian Mountains of Quebec. Don't be fooled by the idyllic setting, Mont-Tremblant hosted F1 grands prix in 1968 and 1970, Can-Am and Trans-Am races in the 1960s and 70s, and a Champ Car race as recently as 2007.

Racing trim suits the Micra, and the car looks snappy dressed in red, white, and gray livery. I climb into the cabin and strap into the racing harness. It's easy to get comfortable in this basic interior. Nerves steadied, I grip the steering wheel, ease the Micra into first gear, let out the clutch, then shift to second and exit the pit lane. Thankfully I'm not the first guy to get out on the track in this car, so the tires are warm.

The rain has stopped, but I'm cautious at first. The track surface is still a little slick, and the front-wheel-drive Micra's rear tires can easily come unbuttoned. As I lap the circuit, my confidence grows. My helpful instructor flashes three and four fingers from the passenger seat to indicate the gear I should be in, and then urges me to floor it in open areas. He's more confident than I am, but as I dart around the track, the adrenaline starts flowing. My peak speed is maybe 93 miles per hour, but that's not the point. The Micra Cup car handles well in corners, the buzz of the exhaust note sounds good, and a manual transmission on a race course is always rewarding. I only get a few laps and before I know it, I'm back in the pits reflecting on the significance of this car for Nissan. 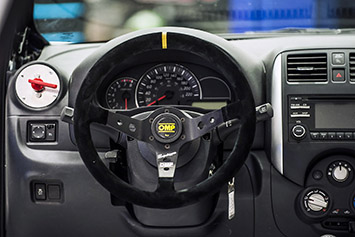 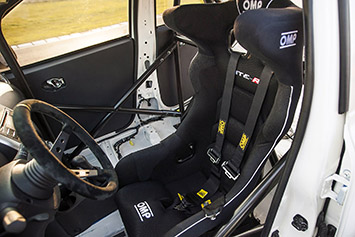 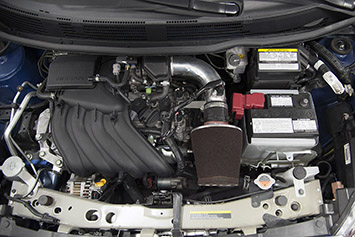 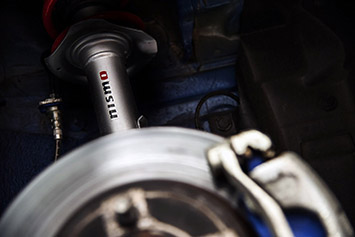 There's no doubt, the Micra quickened my pulse, and Nissan hopes the excitement of competition will will spur sales and help solidify a foothold in the Canadian small car segment. Based on the same platform as the Versa, the Micra isn't sold in the United States, but is a critical part of Nissan's global strategy.

Because it doesn't have the performance cachet of the GT-R or 370Z, Nissan is taking a grassroots approach to racing the Micra. The relatively low cost of Cup cars, $19,998 Canadian, or about $16,747 in US dollars, allows a wider range of enthusiasts to compete in the series, though there's also repair and parts costs. That's not cheap, sure, but it's not like running in the Ferrari Challenge or Lamborghini Super Trofeo series. "It's not a lot of money. It's fun. It's about passion for racing," Nissan Canada president Christian Meunier says.

Motorsports in Action, a Quebec racing shop, preps the Micras for Cup duty. It adds a Nismo suspension kit, FIA-approved racing seat with a five-point harness, safety cage, upgraded brakes, modified exhaust, and Pirelli low-profile performance tires. The stock 1.6-liter four-cylinder engine – rated at 109 horsepower and paired to a five-speed manual gearbox – remains stock. "It epitomizes the simplicity of what a car can be," Meunier says as we chat trackside.

Nissan expects the field will have more than 25 teams. Some of the drivers have karting and minor-league racing experience, two are champions from Nissan's GT Academy, and a few are racing rookies pursuing life-long motorsports aspirations. And because this is Canada, of course there's a former NHL player, Marc-Andre Bergeron, among the contestants. With everyone driving the same thing and no obvious stars, optimism is running high.

"The driver skill is what matters," says Abhinay Bikkani, a GT Academy winner who also has racing experience in India.

The varying talent levels will make for an entertaining series, but the racecar also deserves the spotlight. The Micra has mojo. Running it around a track proves that and casts the little econobox in a new light. Yes, it's a cheap car, but it's also spunky, and racing shows that there's more to lure customers than just a low price tag. On a wet day that was less than ideal for racing, I'm reminded that small cars can have big-time swagger on the track.