The launch of the A45 AMG marked Mercedes-Benz's first real assault on the premium hot hatch segment. And with 355 horsepower from a 2.0-liter turbo four, it is indeed hot. But the latest word has it that Mercedes-AMG is planning an even hotter version.

Speaking with Auto Express at the LA Auto Show last week, AMG boss Tobias Moers indicated that his department was toying with the idea of a more hardcore version of the A45. In what Moers referred to as a "street fighter," the A45's engine would be tuned to produce even more power, the cabin stripped out and the rolling stock, brakes and aero upgraded for more serious performance.

Think of it, then, as something of a Black Series approach, only it's not expected to carry that name, which has historically been reserved specifically for two-door models. Given AMG's current list of priorities and limited manpower, though, Moers suggests it will be several years – likely towards the end of the model's life cycle – before it may prepare such a model, following a similar formula to the Mini JCW GP and Renaultsport Mégane R26.R. Here's hoping an American version based on the CLA could also be in the cards. 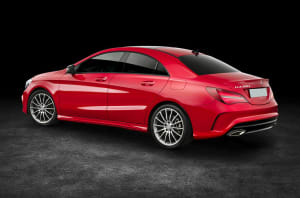