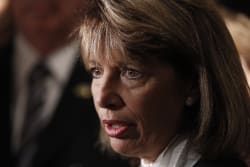 " I am disappointed to see that NASCAR and Stewart-Haas Racing have not taken any action. Your response to these serious allegations has been totally inadequate," Speier wrote in a letter to NASCAR President Mike Helton and the owners of Stewart-Haas Racing, Tony Stewart and Gene Haas, Sports Illustrated reports. The congresswoman's demands, though, didn't sit well with NASCAR Chairman and CEO Brian France.

"Two things: One is there are charges that are levied against, in this case, a driver, and then there is a judicial hearing of some sort that would come after that," France said in a press conference today, SI reports. "We're not even at the first stop yet. That's going to happen when and if charges are filed, and if charges are filed, that will change our equation, and we will look at that."

France's logic would follow the lead of the National Football League and its handling of its domestic abuse scandal. Both Ray Rice and Adrian Peterson were suspended after their indictments, rather than before.

"We have spoken to Kurt in depth regarding this matter and he has vehemently denied that it happened and assures us there is no truth to it whatsoever," agreed Stewart-Haas executive vice president Joe Custer. "At this point in time we are taking Kurt at his word and his status with the team is unchanged."

Speier seems to disagree with that stance, asking NASCAR and SHR to "suspend Mr. Busch from this weekend's championship," – before Dover Police complete their investigation into the September incident – "and adopt a policy going forward in all domestic violence cases to suspend drivers until criminal proceedings end or there is a clear lack of evidence," SI reports.

While NASCAR, as a privately owned company, is under no obligation to observe due process, we have a hard time believing that it'd suspend Busch when the investigation is still ongoing, particularly as there's only one race left in the season. But all of that will change if authorities decide to file charges, according to France.

"If charges are filed, that will change our equation, and we will look at that," France said. "We realize the heightened awareness of this important topic, and our policies will reflect that as we go down. They'll reflect how serious it is."

What are your thoughts? Should NASCAR and SHR listen to Speier's request? Or is the congressional lawmaker wrong for asking NASCAR to take action before legal proceedings officially begin? Have your say in Comments.