Only In Europe, For Now It's official. KTM will be the first legacy brand to sell an electric motorcycle to the public. The Freeride E, a motocross-flavored machine available in both off-road (E-SX) and street (E-XC) versions, will be found at European dealers in just a few short weeks. As with so many cool things, don't look for it to come to the US any time soon. 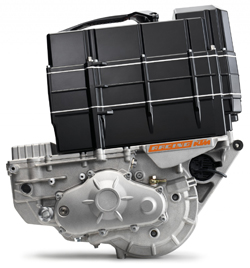 The Austrian company first showed off an electric Freeride prototype way back in 2010 and a refined version a year later at EICMA. Although it has held a couple racing/promotional events featuring the battery-powered bike in the three-year interim, there has been some speculation as to whether it would ever pull the trigger. Consider those mumblings silenced.

KTM has announced that it is "Gettin' High on Voltage," choosing street trials rider Danny MacAskill as brand ambassador and launching a trick Freeride E microsite. The choice of MacAskill is interesting as he comes from the bicycle world, but highlighting that transition could be a shrewd move if it attracts other pedelers into the motorized scene.

One thing the new electric shares with human-powered machines is its braking setup – its back disc brake is activated by a lever on the left handlebar as opposed to a right-side foot-controlled arrangement. Besides that, everything is, of course, different. The bike is powered by a liquid-cooled, permanent-magnet AC motor that's good for 16 kW (21.5 horsepower) at peak and 42 Nm (31 pound-feet) of torque. It employs a single-speed gearbox to get the back wheel spinning.

The battery is a slight 2.6 kWh-box located directly beneath the seat and can be easily swapped out with the removal of four bolts. Said to be good for about an hour of riding, charging to 80 percent takes 50 minutes, while a full refill happens in 80 minutes. Interestingly, the system voltage is a relatively high 260 to 300 volts. Despite the smallish battery, at 106 kgs (233.7 pounds) the E-SX is still more than 29 lbs heavier than its Freeride 250 two-stroke cousin.

The German price tag reads 10,995 euros ($14,130 US) for the E-SX and 11,295 euros ($14,515) for the E-XC, which includes that country's "value-added" tax. We imagine similar pricing in other European countries. Though perhaps a bit steep, the bike does come with quality components, including WP suspension, and should have a lot less expensive maintenance cycle.

KTM doesn't believe that electric motorcycles will replace gas-powered machines any time soon. It does, though, say that it expects battery bikes will carve out their own unique territory and is hoping the segment will attract new riders as well as boost its environmental cred. You can see the new Freeride E in detail by browsing the gallery. Watch it in action in the fresh video below where it keeps company with the official press release.

The 2015 FREERIDE E has been officially launched in Saalbach/Hinterglemm, Austria this week. The ultra-innovative, electrically powered offroad machine, which will be available in two versions and reach the dealers in a matter of weeks, has been presented to the media, along with the announcement of its new ambassador, Danny MacAskill.

The KTM FREERIDE E is the world's first fully-fledged electric offroad motorcycle, and is built with the usual high quality components expected from KTM in two versions, the E - SX and the E - XC. The bike itself is aimed at a vast array of riders including those wishing to ride in urban areas, complete beginners to motorcycling and is also capable of satisfying the more seasoned offroader. The E - SX is intended for closed circuit riding, while the E - XC is fitted with everything required for riding on public roads.

With its high-powered motor, the FREERIDE E is an exciting addition to the FREERIDE range, and also the absolute foundation of KTM's long-term commitment to E-mobility. Since the original idea for the bike was formed in 2007, the FREERIDE E project has seen a whole team of 20 experts evolve in KTM's state-of-the-art Research and Development department in Mattighofen who are completely dedicated to this extremely innovative project.

While KTM doesn't believe that electrically powered motorcycles will replace conventional combustion engines in the near future, the company has a clear vision in the creation of a segment in its own right. KTM believes that in the long-term the FREERIDE E can offer opportunities for new riders and also demonstrates KTM's commitment to being at the forefront of motorcycle technology, along with its concern for the environment with the E-bike's zero emissions and low noise level.

"We're really excited to finally see this ultra-innovative bike head into the market. The feedback from our E-parks, situated around Europe, has been really positive and this is a quality product, which we hope to see on many tracks and trails in the near future. KTM is completely committed to this project, and while the FREERIDE E is already a very established bike, this is really just the beginning of our involvement in E-mobility," said Thomas Kuttruf, KTM PR Manager.

The FREERIDE E is a fun bike, and with both brakes mounted on the handlebar, along with the absence of gears, the switch over from a bicycle should be much easier for new riders. With that in mind, KTM is also pleased to announce its association with YouTube street trials phenomenon, Danny MacAskill, who had shown an interest in the bike earlier this year. Danny is now an official FREERIDE E ambassador and a video of the Scottish star riding the bike will be released in a few weeks' time.
The trailer is already released!

"The FREERIDE E is so much fun. I found it quite easy to transfer from the bicycle, especially with the brakes on the bars and it being just twist and go. It's got more power than I need for sure! For me it's been a great introduction to motorcycles, as I've done a little before but not much, and every time I ride it I am more and more confident. I'm super-impressed with the KTM brand, and I'm really
stoked to be an ambassador and part of the family," said MacAskill.

KTM has announced the new FREERIDE E Microsite, which is available in six languages, and for the first time in KTM's history, offers fully digitalized 3D renderings with state-of-the-art exploded view animations of the models.