Refuel 2014: the best way to spend a summer's day in California

Even If We Didn't Get Behind The Wheel What's the best way to spend a summer day in California? If you're an electric vehicle enthusiast, there can only be one answer: the annual Refuel event at Mazda Raceway Laguna Seca. This is the second year I've been fortunate enough to attend – thanks to an invitation from Speed Ventures, the outfit behind this battery-powered extravaganza – and both times it's rocked my socks.


This act of heresy is on par with the Pope refusing to enter the pearly gates.

I want to tell you all about the 2014 edition and what you might expect to experience should you attend next year, but first, this mea culpa: I am a disgrace to my profession. Having been offered the opportunity to drive a car from EV West around this iconic race track, I declined. This act of heresy is on par with the Pope refusing to enter the pearly gates, content to watch the faithful file in from the vantage point of purgatory.

I could have even just taken their awesome electrified BMW M3 for a few quick rips around the new autocross course, but I balked at that too. And for all this, I am sorry. So, very, very sorry. 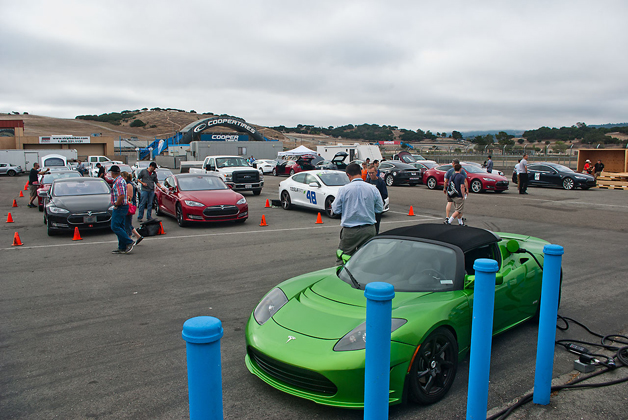 Sure, I had a long list of excuses. I was suffering from a freshly-broken rib that might been made taking hard corners confined by a six-point harness more than a little painful; I was jet-lagged, operating on three hours sleep, four nights in a row; I was also physically exhausted from spending the better part of the day out in the sun, trying to capture all the goings-on for you, dear reader, and might have been a danger to myself and others on a track that demands one full attention.

The rationalizations matters not, though. In retrospect, I should have summoned up the wherewithal to go all out, grabbed that wheel and steered through any pain or fatigue. Now, with backside bruised from a constant kicking of myself, I vividly see the error of my ways and have resolved to take up Mr. Bream on his open offer, should the opportunity rise again. Still, despite my massive misjudgment, Refuel 2014 was the best of all summer days for both myself and the many in attendance.

Not long after the sun starts wicking away the moisture of a rare night rain, cars begin winding their way up the 19-percent grade to the hilltop plateau whereupon sits the final destination of their early morning pilgrimage. The track, in place since 1957, consists of eleven unique turns spread out over 2.2 miles of well-marked and maintained asphalt. With a significant elevation change of 180 feet, it provides the perfect playground for people who love nothing more than challenging themselves and their vehicles on a quick road course. 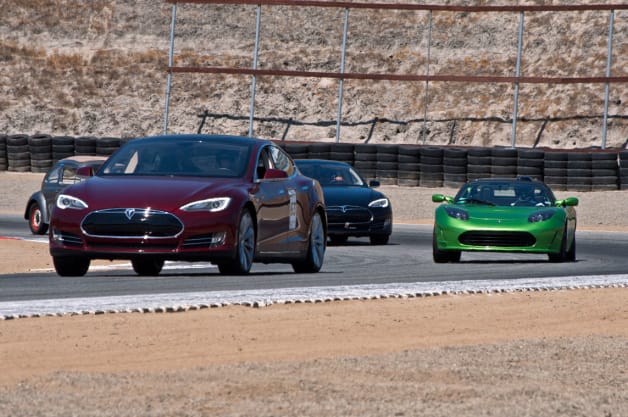 As vehicles start lining up in rows in the infield, the numerous Tesla Model S sedans on hand take over the parking area closest to the six-strong row of Superchargers. With TMC Connect – a conference for fans and owners put on by the Tesla Motors Club forum – taking place in nearby Monterey the day before, there are enough examples on hand that they almost feel as common as Camrys. Yet, with the numerous variations in paint, wheels, and other custom touches, each one still manages to vie for your attention.


There are enough Tesla Model S EVs on hand that they almost feel as common as Camrys.

While the California automaker's cars dominate the Laguna landscape, there are, happily, lots of other vehicles of interest to peruse. Tom Gage, of whom it could be said provided much of the inspiration and some of the technology to start Tesla Motors, was on hand with a pair of historically significant cars: an original eBox – the electrified first-gen Scion xB that his former company AC Propulsion had offered for sale to the public, and a Mini E. The latter is splattered with signage from EV Grid, the pioneer's latest effort. Apparently, BMW has allowed him to hold on to this phased out model to use as a technology test bed, and though I didn't get to see the vehicle-to-grid (V2G) electronics the hood, it was evident from its presence on the track that its driving dynamics are at least as appreciated as its lab-rat functions. 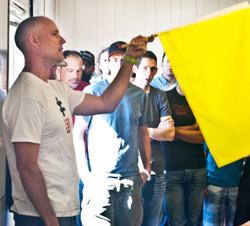 only have a few minutes to look at cars that, for the most part, don't make it out to my Southeastern corner of the country (hey, look! A real Think City!) before the drivers meeting starts. Here, organizer Aaron Bitterman explains the track rules and how the point-to-pass system helps keep traffic moving and everyone safe. He also goes over the various flags. While everyone knows green means start and checkers means finish, not everyone is aware a black flag is waved to inform you that either you or your vehicle have been very bad and must leave the track, or what color comes out when to warn of a banana peel – also known as a California ground squirrel with inopportune timing – is making a corner extra slippery.

The congregation is split onto A and B groups with the latter consisting of relative newbies. The B's hang out in the room a bit longer to get further pointers on cornering and the opportunity to get their questions answered. Before long, though, the once-crowded room has emptied and final preparations begin for the on-track experience. 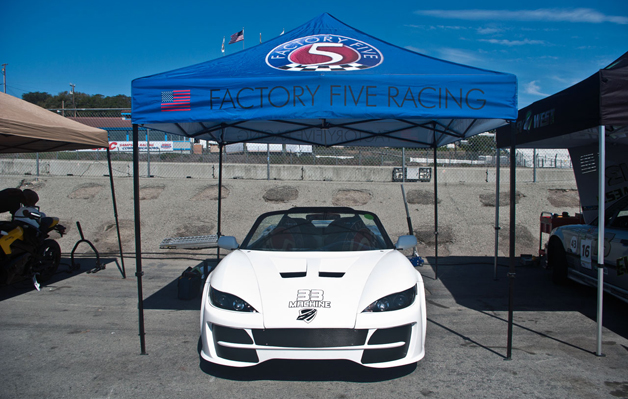 With a few minutes to kill, I stumble across the EV West portion of the lot, where sits the now-complete Factory Five 818e from 33 Machine. We've seen this machine before, but not with its body work in place and not up close and in-person. I snap a few pics and chat with owner Erik Hansen, who opens up the rear deck and allows me to peek inside. It's a clean, minimalist build with a tablet at the bottom of the center console as its concession to modesty. With only 165 horsepower, it's not a Tesla slayer, but with its emphasis on handling, it's hard to beat for a bit of topless fun.

Speaking of fun, the prize for most amusing transportation has to go to Otmar Ebenhoech. With his Stretchla project still under way, he managed to still achievement maximum amusement by his appearance with an animatronic horse, on loan from his friend Bob Schneeveis. The six-legged beast offers something of a bumpy ride, but one sure to bring an EV grin to the faces riders and onlookers. Perhaps not the most practical of pit bikes, it was a definitely a hit amongst those who accepted Ebenhoech's invitation to pony up.


Another popular feature was the new autocross course.

Another popular feature of Refuel 2014 was the new autocross course. Constructed by Speed Venture staff using experience, gut instinct, and lots of orange cones, the tight twisty circuit elicited squeals from tires and drivers alike as they raced against an unforgiving clock. As might be expected, handling is every bit as important as power for a good result. It's no surprise, then, that the best time of the day was turned in by the UC Davis FE1 Formula racer. This was a great bonus for the university team, since they suffered some technical difficulties and didn't get to see much time on the big track. You can watch their 2nd-fastest go immediately below.

While the highlight of the day for most is the competitive portion of the program – the Refuel SportElectric TT – the parade lap has it charms, to be sure. It's just a single orbit at a conservative pace with no passing, but it draws a lot of vehicles and drivers who might not be comfortable taking the course at semi-competitive speed. Let's face it: some people like the idea of driving on a race track, but it does carry a certain amount of risk. This particular day only saw a couple mechanical failures and no paint was swapped, but pushing limits on a circuit is surely tempting fate just a little bit. 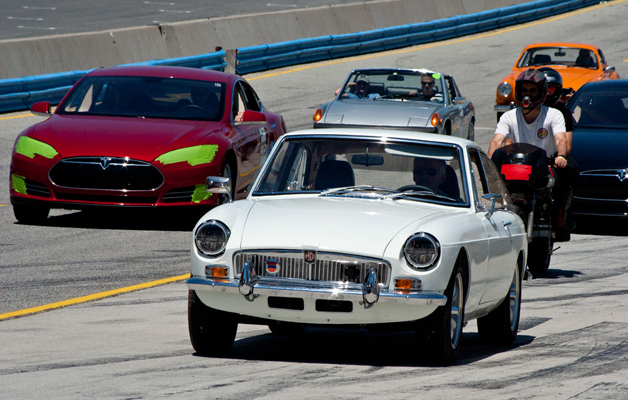 Now, I'm a bit of a sucker for classic car conversions so I was delighted to see an old MG B GT hardtop coupe (above) in the line up for the slow circling. It had some how completely escaped my attention until then, and I never got the chance to catch up with it afterwards. A little bit of sleuthing indicates it is quite likely this one: a 1968 example with more than 500,000 miles, converted by the original owner.

I also have a soft spot for three-wheelers (thanks for your sympathies) and was completely taken by surprise when this beautifully-constructed tadpole trike appeared on the pavement for the parade. Apparently, it was hand built by the driver, who is local to the area. The same guy was also responsible for the converted Honda NX motocross bike.

Hitching a ride on back of a Zero electric motorcycle towards the hill that hides the backside of the track with its famous corkscrew, I find the Rattlesnake Electric Sport encampment. Under a series of white canopies, half-a-dozen go-karts are preparing for the time trial. Tire warmers are in place, and on several of the karts, dry ice sits on battery bus bars in an attempt to sink some chill into the metal that will some see a high amount of current flow.

With time short before the fast laps begin, I shoot a bunch of pics, then begin a sprint straight up the side of the steep slope. Its pockmarked with ground squirrel burrows, rumored to be home to the occasional rattlesnake, but with my chest pounding from the effort and the seconds ticking, I'm worried more about making it to my favorite track-side spot in time to record the action than anything else. That, and a heart attack. This is my second ascent of the day and the hill has definitely gotten steeper between climbs. 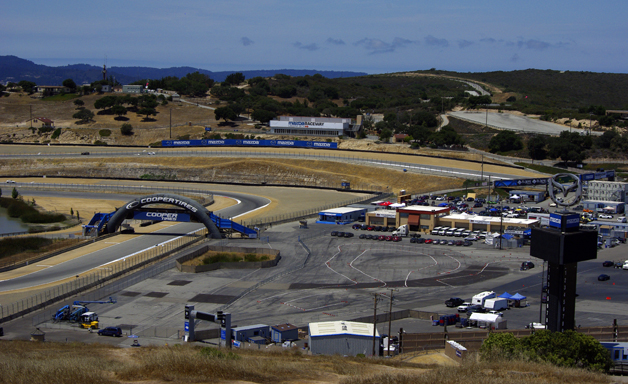 Before I quite make it to the top, I'm forced from fatigue to stop for a bit. I turn to take in the track and the surrounding scenery and, if I'd had any breath available, the sight would have taken it away. The photo above does it no justice. The deep calm blue of the Pacific ocean peeks through the beautiful central California hills, painted in green and various hues of golden brown. Ghosts from decades of racing history whistle reminders of past defeats and triumphs in the light breeze. This is where magic happens.

Refuel by Speed Ventures has, once again, combined this amazing setting with a program of on and off-track action that, infused with the comradery of my fellow battery-powered performance fanatics and a wide variety of vehicles, creates an experience that can simply not be matched by any other EV-centered event. With luck, we'll see you there next summer when I'll attempt to regain my professional pride and properly represent for the AutoblogGreen crew from behind a steering wheel.

You can peruse our massive galleries and catch shots of most of the participants from various vantage points around the circuit. To get a taste of the in-field atmosphere and a bit of track time, ride along with the latest electrified VW Beetle from Zelectric Motors in the video below.