Chris Tutor
At 7:48 a.m., Dec. 7, 1941, Japanese fighters began their aerial attack on US ships in Pearl Harbor. On the 72nd anniversary of that moment, Confederate Motorcycles revealed its newest bike, the C2 P-51 Fighter. 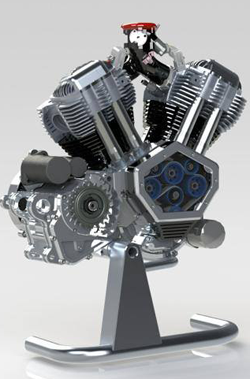 The C2 is Confederate's first bike created under the direction of its new head of design, former Ducati designer, Pierre Terblanche. In a video (watch below) on the company's website, Terblanche says the C2 will keep with Confederate's history of using lots of aluminum, titanium, stainless steel and carbon fiber.

A new billet aluminum crankcase for the V-Twin engine shaves 40 pounds off the company's previous design and a new downdraft injection system "will allow us to have more power and also improve the ergonomics of the motorcycle tremendously," Terblanche says.

Details of the newest Confederate are scarce, but the official site says only 31 will be built and will be available beginning in the summer of 2014. With the Birmingham, Ala.-based company's previous creations selling in the $100k range, don't expect this one to be any more affordable.

Scroll down to check out the video.