"There is a vacuum left in the small pickup category," says Jesse Toprak, vice president of market intelligence for TrueCar.com in a new Detroit Free Press report. And as we all know, the automotive industry abhors a vacuum.

Joe Veltri, VP of product planning for Chrysler, sees that vacuum as a potential for profits.

"Based on our data, young males still aspire to own a pickup," Veltri says in the story. "Historically, if you go back to the '80s, the compact or midsize pickup segment was bigger than the full-size segment."

So why are small trucks no longer popular? Veltri and others argue that as the sticker price of smaller pickups got bigger, larger pickups began to look more affordable. Why buy a small pickup for $20k when a full-size truck is only a couple thousand more? We might add: Why by a small pickup when they've gotten so large that they're not much easier to drive or park than their full-size contemporaries?

Veltri says nothing has been finalized, but the company has been talking about a new small pickup for ages now. In fact, way back in 2002, they rolled out the blazing yellow Dodge M80 concept shown above. We loved it then, we like it now. A little bit retro, a whole lotta masculine. Build it on a unibody platform for better fuel economy, price it well below the full-size Ram and, bingo, vacuum filled. Like the Honda Ridgeline, it would give non-traditional truck buyers a more economical choice. If it were properly executed, well-priced and managed appreciably better fuel economy, we think it could be a strong seller seller (a trick that has thus far eluded the Ridgeline).

News stories the past few years have suggested that Chrysler has been investigating a unibody pickup as a replacement for its now-deceased Dakota midsize truck for several now, but we haven't heard much about the possibility since CEO Sergio Marchionne admitted in January that there's a " Better than 50-percent chance" that the next Dakota will rely on unibody construction. 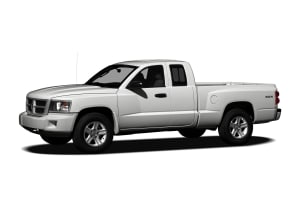