Situated on a former brownfield site, VW's Chattanooga plant is where the new 2012 Passat (aka Motor Trend's 2012 Car of the Year) is built. The facility was clearly designed from the ground up to have as little environmental impact as possible. To name just a few examples, the factory roof collects rainwater that is used to flush toilets, floor tiles are made out of recycled glass bottles and the LED lights in the parking lot contribute minimal light pollution. Oh, and there are many, many robots at work here. That may not be specifically green, but it is impressive.

We will soon post a detailed report from Chattanooga on the efforts that VW made to seriously green up the way it build cars – and how what it learned in Tennessee will be put into action around the globe. Until then, you can learn all about LEED certification for new buildings in this PDF from the U.S. Green Building Council and read VW's PR after the jump.
Show full PR text
Volkswagen Chattanooga Earns LEED Platinum

"Because Volkswagen has a longstanding, worldwide commitment to sustainable mobility and environmentally responsible manufacturing, we are proud to have achieved the LEED Platinum certification at our Chattanooga manufacturing facility," said Hubert Waltl, member of the board of management of Volkswagen Passenger Cars Brand for production and logistics.

Our commitment to building a LEED certified factory began in the planning and design stages," Fischer said, "I believe that this not only helped insure that we would achieve Platinum status, but was actually a very cost effective way to implement environmentally responsible building methods," he said.

The ultra-clean paint shop alone will save 50 million gallons of water in ten years.

"Volkswagen is clearly committed to the US market;" said Jonathan Browning, president and CEO, Volkswagen Group of America, Inc. "During the worst recession in the past century we never wavered with our investment of a billion dollars to create this world class facility. This certification underscores Volkswagen's commitment to engineering excellence."

LEED certification is an internationally-recognized green building certification system developed by the USGBC in March of 2000. LEED provides building owners and operators with a framework for identifying and implementing practical and measurable green building design, construction, operations and maintenance solutions.

LEED promotes sustainable building and development practices through a suite of rating systems that recognize projects that implement strategies for better environmental and health performance.

Aspects of the plant that earned LEED recognition include:
Superior insulation provided by six inches of mineral rock wool, resulting in 720,000 Kilowatts per year savings.
Green power from the local hydroelectric dam
Use of LED lighting on the exterior results in 68% less energy used, up to 262,500 kWh per year and a reduction in light pollution.
Rainwater collected and reused to flush toilets and cool the welding machines
White roof membrane is highly reflective, minimizing heat island effect by up to 50 degrees Fahrenheit.
Natural flowing creeks to capture heavy rains and restore a natural habitat
Low-flow water fixtures and no-touch sensors throughout the plant reduce water usage by 30%.
Plant was built on a brownfield property with no destruction of untouched nature. Protected 100 ft. wide creeks and wetlands were established to create natural habitats with low impact on natural habitats.

"We are very pleased that the Volkswagen Academy has been Platinum LEED certified, because this reflects the level of excellence that we expect and produce in the academy," said Hans-Herbert Jagla, EVP of Human Resources.

Volkswagen Chattanooga produces the all-new 2012 Passat, which has recently been named Motor Trend magazine's 2012 Car of the Year, as well as having earned the Insurance Institute for Highway Safety's (IIHS) Top Safety Pick rating, the highest possible from the non-profit safety research organization. The Passat TDI – the only clean diesel option in the midsize segment – is rated at 43 mpg highway, with a range of nearly 800 miles.

About Volkswagen Chattanooga
Volkswagen will invest $1 billion in the local economy for the Chattanooga plant and create more than 2,000 direct jobs in the region. According to independent studies, the new Volkswagen plant is expected to generate $12 billion in income growth and an additional 9,500 jobs related to the project. The Chattanooga manufacturing facility builds the all-new 2012 Passat sedan, specially designed for the North American market and winner of the Motor Trend magazine 2012 Car of the Year award. 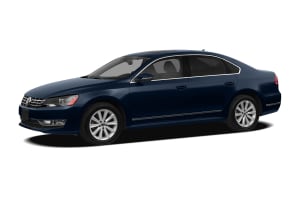