Is there an automobile roaming our nation's roads that you love to hate? Certainly, those with a love for high-octane gasoline and low quarter mile times tend to bitch and moan about the proliferation of hybrids like the Toyota Prius. On the flipside, those with a mind toward fuel efficiency (ie, Prius drivers...) direct their ire toward fuel-sucking supercars and needlessly large SUVs.

Ick. We sampled the CrossCab ourselves out in the sunny climes of California, and you can read all about our own experiences with the $47,000 convertible crossover right here. In a nutshell, we don't hate the CrossCab with the apparent fervor of some reviewers, but we do question whether it was wise for Nissan to invest so much into a vehicle that couldn't possibly sell in large numbers. Plus, it's certainly a bit of an ugly duckling, no?

That said, we're interested in your view. Is the Nissan Murano CrossCabriolet your most disliked car of 2011? 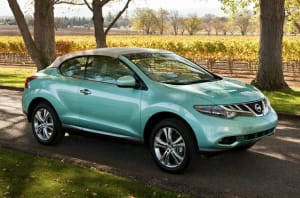