Earth Day 2020 is coming up this week, and what better time for Jay Leno to drop off an unseen episode of "Jay Leno's Garage" featuring a youthful Elon Musk and the original Tesla Roadster? ESPN dropped "The Last Dance" early, so it's only right CNBC provide some entertaining visual pandemic relief, as well. Leno and Musk briefly discuss the properties of electric vehicles and how the Roadster is constructed before taking production unit No. 1 out on the road.

Leno says he was combing through his archives when he noticed the old footage that has never aired on his YouTube channel before. The video opens to a present-day Leno with a 1909 Baker Electric, but that vehicle is only a transition to the true star, the Roadster.

The black Roadster in the video is the first customer model ever made, and at that time, it only had about 500 miles on the odo. For those counting, this makes two times Leno has had a Tesla Roadster on his show, as he previously tested the new version, as well. Leno owns a Model S and is a cheerleader for the company, the technology and Musk, so it's interesting to see video of the two's early relationship.

The original Roadster, which was made from 2008 through 2012, was built on a stretched Lotus Elise chassis. However, it does not have any body parts in common with the Lotus and only 8% of the Roadster's parts were carried over untouched from the Lotus.  With the added battery pack and energy management system, which are both located in the rear of the car, the Roadster was about 30% heavier than the Elise despite having a body made entirely from carbon fiber. Even back then, Musk was pushing the fact that this was a California-made car because the majority of the value was made in Cali.

The old Roadsters had a battery pack made of 6,831 batteries that could fully charge from 0-100% in 3.5 hours. Musk and Leno go on to discuss the advantages of electric vehicles, as well as how electromagnetic braking works. Below, we've added another video of Leno discussing the video you see above, and further down is a recent CNBC video about a man who spends his life fixing old Tesla Roadsters. 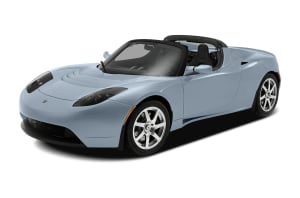