48-volt tech is in the pipeline, and a plug-in system could arrive later

Land Rover is preparing to give the Discovery a mid-cycle update that puts a strong emphasis on fuel efficiency. The family-friendly off-roader will allegedly break cover by the end of 2020 with hybrid technology under the hood.

According to British magazine Auto Express, Land Rover has focused on 48-volt mild hybrid technology. The company needs to keep its CO2 emissions in check to comply with strict new regulations in the European Union, and a 48-volt system is cheaper and easier to implement than other, more comprehensive forms of electrification because it's less intrusive. It doesn't directly drive the wheels, or provide any kind of electric-only range. Which engine(s) receive the setup could vary from market to market; Auto Express speculated the popular 2.0-liter and 3.0-liter turbodiesels will be electrified in Europe, but we may see a different roster in the United States.

Looking ahead, the Discovery is also in line to receive Land Rover's plug-in hybrid technology, which is already available in the P400e-badged variants of the Range Rover and the Range Rover Sport. In those applications, it teams a turbocharged, 2.0-liter four-cylinder with an electric motor fed by a 13.1-kilowatt-hour lithium-ion battery pack. The motor can power the wheels on its own for short distances, and the system saves more fuel than a mild hybrid setup. The powertrain might not join the range until after the face-lifted Discovery breaks cover, however.

The biggest changes made to the Discovery will be underneath the sheet metal. The SUV bowed at the 2016 edition of the Paris auto show, and it went on sale during the 2017 model year, so it's not due to receive a major design overhaul. We expect new technology features will find their way into the cabin, and it's reasonable to assume Land Rover will take advantage of the refresh to expand the model's suite of electronic driving aids.

If the report is accurate, the hybridized Land Rover Discovery will make its debut before the end of 2020, and it will likely reach American showrooms for the 2021 model year. The British firm hasn't commented on the SUV's future, though it previously stated it canceled plans to offer the model with a V8, and it's not looking back. 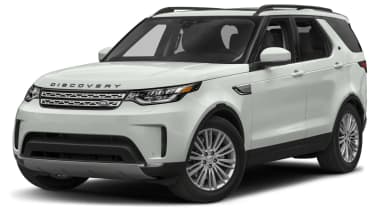 $1,645 - $2,092 Nat'l avg. savings off MSRP
See Local Pricing
I'm not in the market for a vehicle at this time. Please move this suggestion to the side for 30 days.
Huge Savings