This could be the Challenger to get

The Dodge Challenger finds a new and exciting way to make itself interesting every year. It remains true to itself and is the horsepower bargain of the century so far. There's a version for everyone, from the AWD GT trim to the 797 HP Hellcat Redeye.

The 2019 and soon to be 2020 Dodge Challenger R/T Scat Pack Widebody is another Challenger dart thrown against the wall by Dodge. It takes the desirable Widebody package we’ve seen on Hellcats and applies it to the naturally aspirated Scat Pack with the 6.4-liter V8. This kit includes stiffer adaptive shocks, stiffer springs, larger stabilizer bars, big Brembo brakes, a 3.09 rear axle ratio, 20-inch forged wheels and massive 305 section-width tires on all four corners. Most important of all, you get the special Widebody fender flares that give the car its signature look. The package is $6,000 on top of a regular Scat Pack. That means the cheapest you’ll step into a Scat Pack Widebody is $46,740.

The Widebody that rolled through our offices came in at a much-higher $57,295 after a number of options were tacked on. Many of these, you can skip. The 485 horsepower and 475 pound-feet of torque that comes standard is the most important aspect of this big coupe. Several packages costing more than $1,000 each add convenience and driver assistance tech, and the Harman/Kardon system is a hefty $1,595. With such a loud engine and exhaust, it’s hardly worthwhile. Our tester also had the $1,595 eight-speed automatic transmission. This’ll let you scare unsuspecting bystanders with the remote start system, but opting for a manual is an easy way to save some cash and increase driver involvement.

With all the modern technology like adaptive cruise control, auto high-beams, heated and cooled seats, and blind-spot detection, the Challenger tries its best to keep up with the times. It’s no technological marvel, but it’s neat to see some of these options available for folks who might want them. Still, tech gizmos are not what the Widebody is about. This Challenger keeps the same personality as all of those before it, but adds a dash of handling and hostility to its outward appearance. Here are our varied experiences with it during a week of testing.

Editor-in-Chief, Greg Migliore: Yes, you can put a rear-facing convertible car seat in a Dodge Challenger. I did. It actually wasn’t that hard. Remember, the Challenger is genetically a Mercedes sedan and shares underpinnings with the Dodge Charger. The biggest hurdles are ingress and egress, which is to be expected in any coupe. The roofline is low, but really not that bad. I simply lifted my toddler and maneuvered him into the backseat.

I was able to get him secured and fastened, and then I just stepped out of the car. He had a great view out the back window, and he seemed to enjoy the 392 Hemi. The naturally aspirated V8 sounded good to both father and son. I had to sit closer to the dash than I would prefer. I anchored the car seat in the middle spot, which is usually the best position when you have one car seat.

As a parent, I wouldn’t really recommend the Challenger as a family car. Visibility isn’t great and it’s a bit unwieldy, especially on wet pavement. But when the roads are dry, this muscle coupe can handle a car seat and a toddler, which is no easy task. 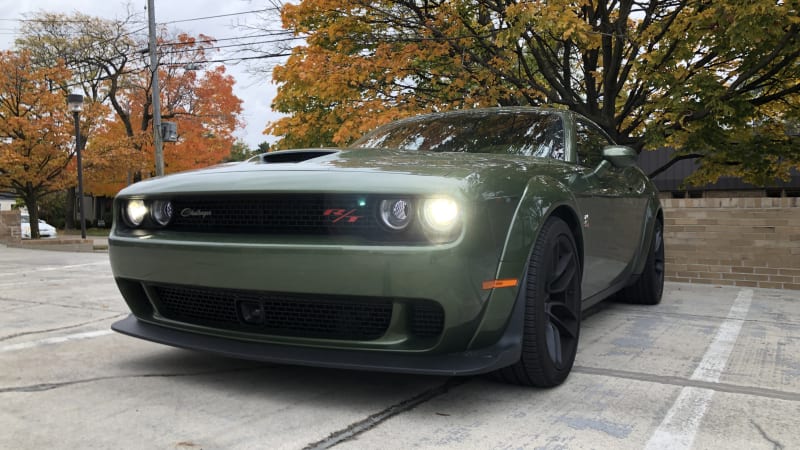 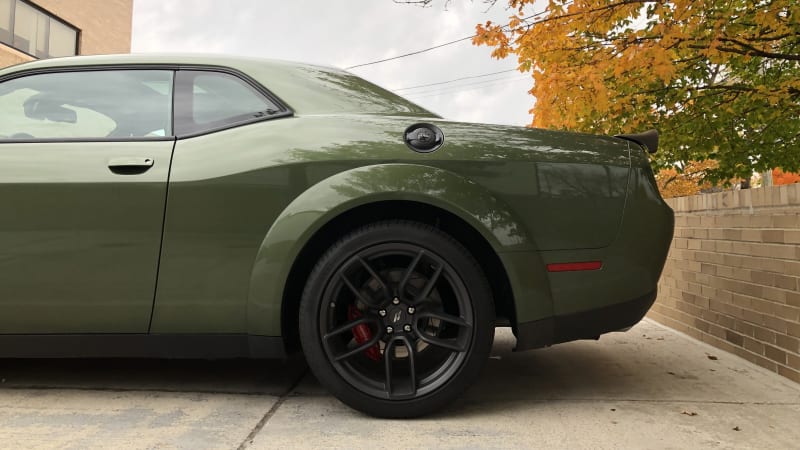 Assistant Editor, Zac Palmer: The Hellcat is great and all, but the Challenger R/T Scat Pack Widebody makes one hell of a case for itself as the Challenger to buy. I think it looks downright menacing, especially in our tester’s F8 Green paint (pictured above). Square 305 section-width tires fill the wide hip bulges in front and back. It may sound childish or immature to fall for such a simple body change, but the Widebody looks like it’s ready to be the worst kind of influence in your life.

I can attest to it being a bad influence on your driving habits, too. You have to practically tip-toe on the throttle to keep from chirping the rear tires on takeoff. Lean into the throttle as you would to take off briskly from a light, and you’ve just executed a small, delightful burnout. The abundance of Challenger and Charger burnouts at the Woodward Dream Cruise all makes sense now. But seriously, make sure you don’t find yourself being too exuberant around the Five-O.

All the added performance parts and appearance modifications for the Widebody (found above) seem totally worth it, too. The Widebody Competition Suspension is on the stiffer side of things, but it’s plenty compliant for most roads. Its rapid acceleration didn’t exactly leave me wanting for the Hellcat, either. The Widebody gives me the looks I want and I get to save a few bucks over the 717 horsepower monster. My advice: Don’t sleep on the Widebody if you’re in the market for a Challenger.

Associate Editor, Joel Stocksdale: This is the first time I've been able to drive a Widebody Challenger without the Hellcat engine, and without the supercharged 700-plus-horsepower V8 distracting me, I was able to finally appreciate the fact that this thing actually handles and stops impressively well.

Much credit goes to those fat tires that provide shocking amounts of grip. Then there's the electronically adjustable suspension that keeps body roll at minor to near nonexistent amounts depending on the setting. The brakes are big six-piston units at the front and combined with the huge tires, they'll halt the car in a hurry and a half.

With that being said, hustling the Challenger can be a bit of a handful. It's still very big and heavy, and that means you'll be concentrating harder to keep the ends and edges threaded through tight roads and making sure the weight doesn't overwhelm the tires in corners. The steering isn't particularly precise, and while there's some feedback, it's garbled. The sensation is like steering with thick, soft mittens on. Also, like Zac mentioned, 485 horsepower is still plenty to break the back end loose. But all of this gives the Challenger a mean, scary and charming character that I'm not sure I'd want to trade for a more refined experience. 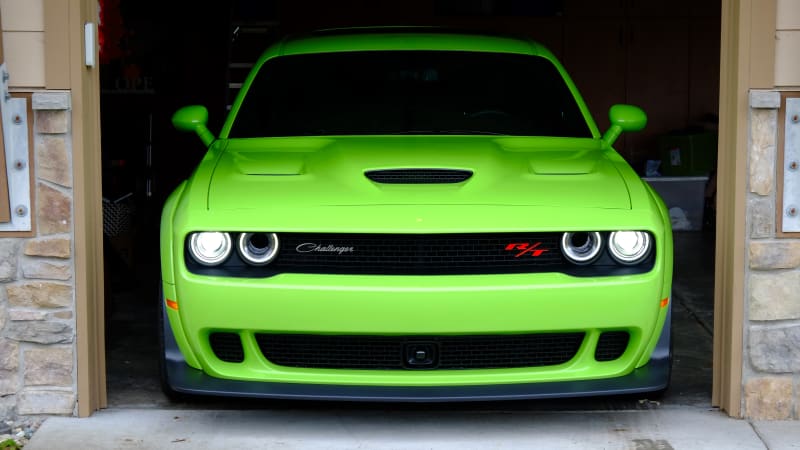 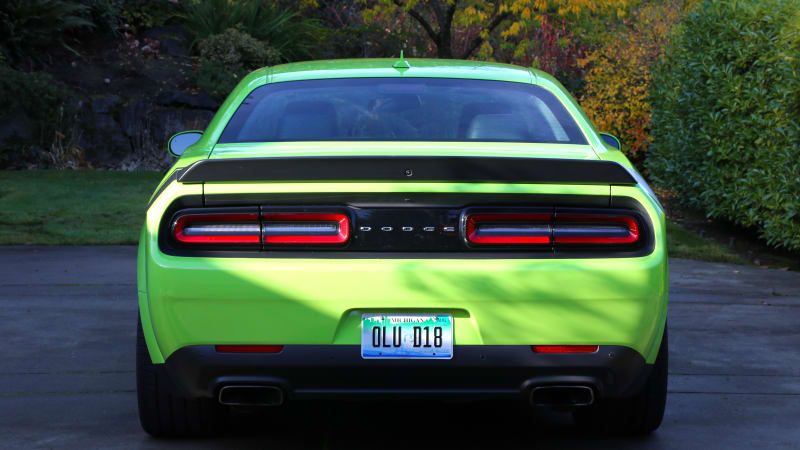 Managing Editor Greg Rasa: You've got to be one supremely confident individual to own a car so bright it sears the retinas of all who gaze upon it. Unlike the crew back at Autoblog HQ, who had that grandpa F8 Green, I drove a Scat Pack Widebody in Sublime, an outrageous Mopar heritage color from 1970. It's so intense you want to look away, but like Trump and the solar eclipse, you just keep staring. It's the color of the Wicked Witch of the West if she had food poisoning. The toxic glow, and I mean that as a compliment, is so intense that it actually tints green the view on the backup camera screen.

Driving any Challenger is retro-cool, in the way riding a dinosaur would be retro-cool. You can't believe it still walks the earth. But even though it weighs more than 4,200 pounds, this more evolved dinosaur can dance. It doesn't feel as nose-heavy, and the adaptive suspension and fat 305-mm tires make it handle better than the skinny Challengers. Throwing it around a circular onramp is fun. And flooring it for the couple of seconds it takes to reach highway speed is thrilling, with the eight-speed automatic quickly and impressively pounding through the gears. Zac's right, the throttle is not nuanced, and the tires would really like to spin if only you'd ask. I was a little nervous backing it into my garage; a flinch of the toe could send me into the back wall.

Beyond the color, it's overall a great retro package: the 392 badging, the super-aggressive chin spoiler, the black accents, the hood vents and air-intake headlights, the black wheels and Brembo brakes, the Widebody flared wheel openings. It's funny that the fuel flap says "FUEL," since you'd quickly become quite familiar with where the gas goes.

The latent brute force of the Scat Pack made me kind of sad to drive it, like when King Kong was put on display in New York City bound in chains. The 485-horsepower Hemi and improved handling mean that the things this car does best can't be done by a law-abiding citizen. I wanted to play with its launch mode, but there was no public place appropriate for that. I left the Challenger parked and drove my own vehicle a couple of times because it just wasn't a good choice for the errand at hand, including a trip into a sketchy part of downtown Seattle where the car would've screamed, "Vandalize me!" Like its color, the Scat Pack is overkill — not as much overkill as a Hellcat, but it is a menacing beast in a mundane world. I can't see it as a daily driver.  But if you have the green to put some Sublime in your garage for track days, cruise nights or special occasions, go for it.