Mercedes-Benz continues its rollout of the lightly refreshed 2020 GLC crossover this week with the release of the new 350e 4MATIC EQ Power. In addition to small tweaks to its interior and exterior looks, the major change comes in storage. Energy, not cubic-feet. The 2020 350e has a bigger battery back, which gives it a slightly longer electric driving range.

The updated 2020 GLC-Class was first unveiled in February 2019, but information about the hybrid version was absent. Mercedes-Benz fills that gap today, as it digitally unveils the 350e coinciding with its official debut at the 2019 Frankfurt Motor Show.

Power is put to the ground through Benz's 9G-TRONIC transmission (previously seven-speed) and 4MATIC all-wheel-drive system. The new hybrid design includes the use of a torque converter with an integrated lockup clutch as a starting device, and a second clutch between the gas engine and the electric motor allows for full electric driving.

The most significant change for the 2020 model year is a battery pack upgrade from 8.7 kWh to 13.5 kWh. Mercedes-Benz says the bigger pack allows for an extended electric-only range, but it does not give a specific number based on U.S. ratings. Don't expect it to be much, as the NEDC electric range is about 28-30 miles. On Level 1 charging at 1.2 kW, 10 percent to 100 percent would take about 7.75 hours, while charging from 10 percent to 80 percent on Level 2 at 3.8 kWh takes about 2.25 hours. A new onboard charger increases charging capacity from 3.6 kW to 7.4 kW.

For 2020, the entire GLC range including the 350e gets a host of upgraded standard features. It now has the new Mercedes-Benz User Experience (MBUX) infotainment system across a 12.3-inch digital instrument cluster and 10.25-inch touchscreen multimedia infotainment display, including Android Auto and Apple CarPlay integration. It also has a new-generation touchpad and multifunction steering wheel. Keeping safety in mind, the 350e comes standard with active brake assist, adaptive braking technology, crosswind assist, and attention assist.

From a visual standpoint, onlookers might have to squint a bit to notice the changes. Some chrome trim has been altered, the radiator grille has been tweaked, and the LED headlights and taillights have been slightly changed. 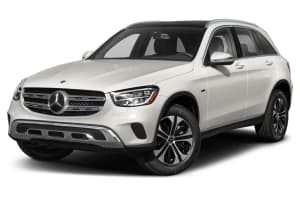