We dig this traditional body-on-frame SUV

View All Specs
Add a Review
When the Cadillac Escalade debuted 20 years ago, car-based crossovers were just getting their start. The Escalade was and still is basically a Chevy Tahoe with new styling and a nicer interior. That's especially true today, as our test car has an interior that looks like it was lifted straight from a Cadillac CTS rather than a Chevy Silverado. Crossovers may be more comfortable and fuel efficient, but they can't hold a candle to towing and payload capabilities of a body-on-frame SUV. If you need to haul seven people and a full-size Airstream in quiet comfort, few options are better than the Escalade.

This week, our tester was a long-wheelbase Escalade ESV. That means substantially more room both behind the third row and with the seats folded. The Premium Luxury trim sits in the middle of the lineup, but it still comes with a lot of goodies. Features include a Bose audio system, a digital instrument cluster, a heads-up display, heated and cooled leather seats, a heated steering wheel, tri-zone climate control, Magnetic Ride Control and a stout 6.2-liter V8. Options include upgraded leather for $2,000 and polished 22-inch wheels for $600. All in, this Escalade was just shy of $100,000.

Editor-in-Chief Greg Migliore: The Escalade is arguably Cadillac's best vehicle. It's a bold, body-on-frame SUV that feels decadently all-American. The Escalade is still contemporary even though it's been years since the ute has had a major redesign. I enjoyed a couple nights in this luxury bruiser. The V8 is powerful, and the 10-speed is a smart improvement. The command seating position is always welcome for me. The interior is nicely laid out, and the materials all look and feel upscale. Not a huge fan of Cadillac's touchscreen (no longer officially called CUE), but it seems to be getting better or I'm getting used to it. Love the Escalade's exterior design. It's dramatic, imposing and gives Cadillac something that's a true style-leader. All that being said, I'll be interested to see how Caddy iterates the Escalade. The Lincoln Navigator is an excellent product and a worthy adversary. Cadillac would be wise to keep its SUV flagship fresh.

Senior Editor, Green, John Beltz Snyder: I was not excited to get into the Escalade. This is really not my cup of tea. I used to love the Chevy Suburban, but that fondness has languished as my tastes evolved as these huge vehicles have modernized, losing the charm that drew me to them when I was younger.

The Escalade really feels like an enclosed Chevy pickup with Cadillac tech and styling, because that's essentially what it is. The first giveaway of this SUV's roots is the steering wheel, which has a slight cant toward the driver-side door. That off-angle drives me nuts. Heading down the road, you do get a sense that this is a true body-on-frame SUV, for better or worse.

I do like the interior, though. The piano black everything would normally seem a little much to me, but it just works when Cadillac does it. The Cadillac touchscreen and I get along pretty well for the most part, too. Some of the controls — in particular the cruise control buttons on the steering wheel and the volume slider on the center stack — are counter-intuitive to use, but I do like Cadillac's driving assist tech.

I got out of the Escalade slightly relieved to be done with it. I felt a part of my soul die with every passing mile and the fuel it burned. I will say, though, that I warmed up to this big ute just slightly after spending some time with it.

Manager, Production, Eddie Sabatini: Love it. I'd get the short-wheelbase Escalade over the ESV, but only because I don't need that extra space. I had no issues driving the ESV and though I didn't use it the park assist would make parallel parking this breast a breeze. The only thing I really disliked about the Escalade was the infotainment system. The layout and the button aesthetics are fine to look at but lack responsiveness and feedback. It's not a pleasant user experience and sometimes pressing them proved not to work on first touch. But this is really where my dislike for the Escalade ends. I love the design and the 400+ horsepower matted to the 10-speed automatic, which I found to be smooth. And while the Escalade isn't cheap, I'd still recommend. 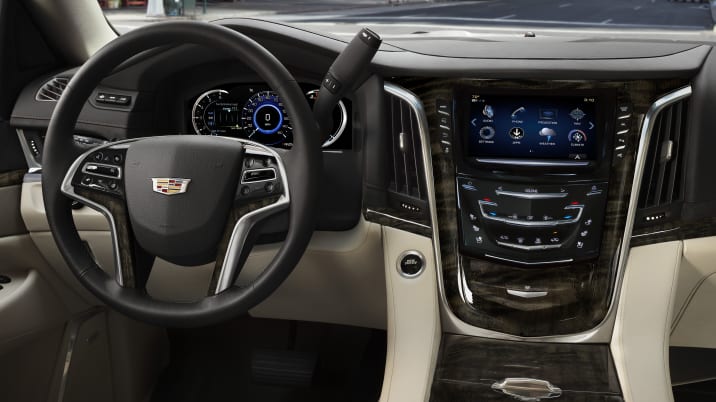 Associate Writer Zac Palmer: I was strangely excited to drive the tank of a vehicle that the Escalade ESV is. It's supposed to be the best (if you look at the price) SUV that GM can screw together. Unfortunately, I came away from the experience with a little less excitement than when I set out.

Luxury cars need to get the small things right — they should make driving easier and less stressful. The Escalade fumbled the ball on a couple of those small things for me. To start, the mirror turn signals are easily mistaken for the blind-spot warning indicator. Both lights are amber, and they're positioned really close to each other. Every time I'd glance over in my mirror when changing lanes, I'd be spooked momentarily by seeing the amber light flashing as though I missed a car when checking my blind spot. But nope, it's just the mirror turn signal that Cadillac inexplicably decided to make visible to the driver as well.

Another irritating thing to deal with is Cadillac's infotainment stack. It looks cool and futuristic, but using the system is not easy. Physical buttons aren't broken, and an all touchscreen interface would be preferable to the constant missed inputs from this mess. Following the CT6's lead here would be perfect.

While all of that was pretty negative, I still enjoyed the act of driving the car. The 6.2-liter V8 is awesome sounding, and moves the massive beast out with real verve. Its new 10-speed automatic transmission was impeccable too. I always seemed to be in the right gear for the acceleration I was asking for, and shifts came smooth and fast when they should have. If I had a couple bones to pick with the driving experience, it'd be with ride quality and brake feel. Hiding behind the adaptive dampers and tons of sound insulation is a truck chassis, so of course, it rides like a truck. Braking requires a surprising amount of leg effort as well for a new luxury car. You certainly won't be slowing this train down quickly without exerting a curiously high amount of effort on your part. 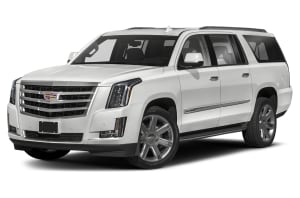