BMW M5 finally getting all-wheel drive, can be switched off

This is either very good or very bad news, depending on your perspective. After months of rumors and speculation, BMW finally announced what we've all been expecting: the next M5 will have all-wheel drive. This is sure to raise the ire of purists who still lament the move away from six-cylinder power, but it was always going to be difficult to send the expected 600 horsepower from a twin-turbocharged 4.4-liter V8 to the rear wheels. Unfortunately, the announcement doesn't have final power or performance specs, though we do know the car will go on sale later this year.

BMW promises the M5's all-wheel drive system, suitably named M xDrive, will make the car the "most exciting and emotionally enthralling" M5 yet. That still remains to be seen, but it's sure to be the most advanced and the most complicated M5 ever. To make it feel like an M car, the M xDrive system is set up to be rear-biased, only sending power forward when the rear loses traction. The goal was to deliver optimum traction while providing a similar driving experience to the current M5.

There are five different drive modes when you combine the various stability control (DSC on, MDM, DSC) and all-wheel drive settings (4WD, 4WD Sport, 2WD). The latter allows the all-wheel drive system to be completely disabled, sort of a bone thrown to purists. What's likely to irk people is that the M5 defaults to 4WD mode with DSC on everytime it starts. Each drive mode allows for more and more freedom, giving some control back to the driver. 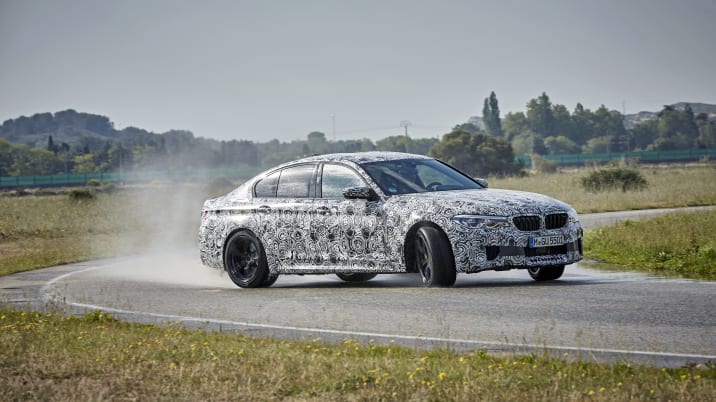 Inside, the M5 gets a redesigned instrument cluster and a new screen which BMW dubs "Control Display." There are no photos of the new display, but based on BMW description it will be similar to the current car. Two round dials with red needles are supplemented by a digital speedometer and a rev-counter with adjustable shift lights in the heads-up display. The HUD also has other M-specific functions, though BMW doesn't specify.

Despite all the news on the all-wheel drive system, BMW is holding back on most other details. The photos don't show anything we haven't already seen in spy shots. Horsepower, torque, and performance specs are all up in the air, though BMW does say that the car will have "sprints in the sort of times that leave its predecessor trailing in its wake," essentially meaning it's faster than the old model. Look for more info in the coming months.