Autonomous vehicle missed its opportunity to merge ahead of bus.

Pete Bigelow
Officials with the Valley Transportation Authority have released video footage of a collision between one of its buses and a self-driving car operated by Google.

The crash occurred in February, and is the first in which the company's autonomous technology is at least partially at fault. Details of the collision between the Lexus RX450h prototype and regional bus were previously available in a written report submitted to the California Department of Motor Vehicles, but the video footage from eight on-board cameras provides fresh insight into this accident in particular and the broader operations of Google's autonomobiles.

The Google car had moved to the right-hand side of a wide lane on El Camino Real in Mountain View, Calif., in anticipation of a right turn. But it sensed sandbags blocking its path, and was attempting to return to the center of the lane when struck the side of the passing city bus.

"Our car had detected the approaching bus, but predicted that it would yield to us because we were ahead of it," Google wrote in its monthly report. "Our test driver, who had been watching the bus in the mirror, also expected the bus to slow or stop." The company acknowledged its technology was at least partially to blame for the February 14 accident.

The video provides fresh insight into how a space opened between the bus and a GMC Yukon traveling in front of it. A space about the size of two car lengths appears to open, but the Google car didn't react in time to fill the window. Instead, it scraped up the side of the city bus and sustained damage to the left-front panel serious enough that it needed to be towed from the scene. 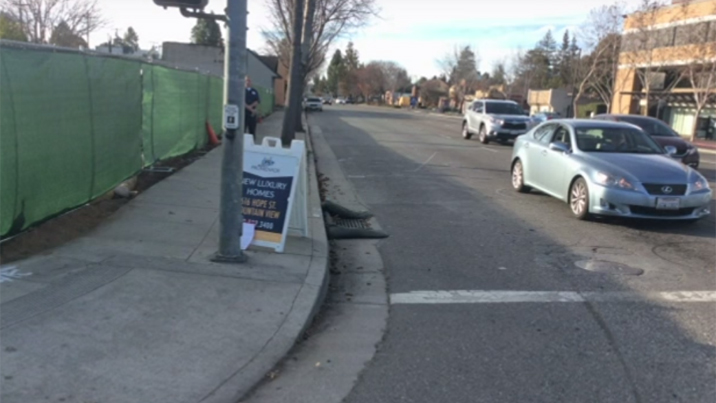 Another takeaway from the video is that it provides the public with a clearer picture of the sandbags the Google car had been navigating around. They flank the near and far sides of a storm drain. A human driver might conclude they would pose no threat to a car or driver, even if the tires rolled over top. But the Google car either didn't discern the nature of the obstacle or the algorithm governing its movements wouldn't allow it to risk a ride over the sandbags.

"We've now reviewed this incident (and thousands of variations on it) in our simulator in detail and made refinements to our software," Google said in its monthly report. "Our cars will more deeply understand that buses and other large vehicles are less likely to yield to us than other types of vehicles, and we hope to handle situations like this more gracefully in the future."