2017 Lincoln Continental reimagined as a coupe

Alex Kierstein
If nothing else, the production version of the Lincoln Continental has provided ample water-cooler fodder around the office. There are a few camps: the "it took guts to build it" folks giving credit where due on a handsome design with an ambitious interior, and the "MKZ misstep" group haranguing the Motor Company for blowing fancy new styling cues on a lesser beast. And yet, unifying forces exist. We can all agree that these artist renders depicting a Continental sans a pair of doors present a captivating notion.

Back in 1939, the original Continental was a two-door. Over time, four doors of various types, including convertibles, infiltrated the lineup. The last time the Continental was on sale, it was a four-door front-driver based on the platform shared with the Mercury Sable and Ford Taurus. 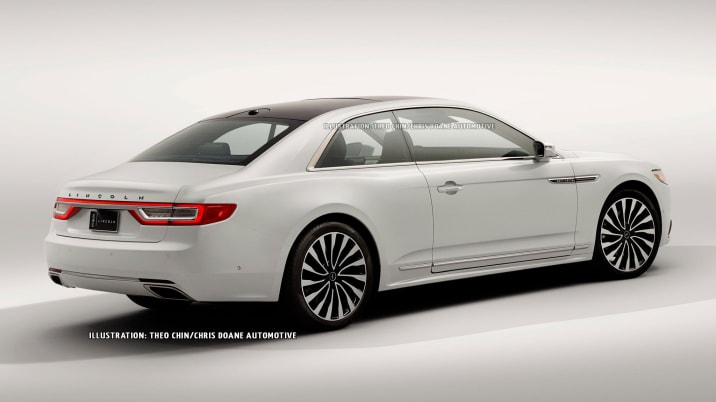 Even though the new production Continental, like that penultimate one, is based on a front-drive platform, the execution is much different. As you probably already know, it features a so-far unique 400-horsepower 3.0-liter V6 and an advanced torque-vectoring AWD system, standard. Some neat concept car touches, like the fancy door handles and patented 30-way adjustable seats, made it in.

What a two-door would bring to the table is mainly stylistic, emphasizing the long parallel character line in the door with brightwork running under the window that's echoed in the lower door sculpting and chrome strip. It accentuates the car's length, and calls attention to the trim taillights and their interconnecting bar element. A longer door makes for a more elegant transition into the C-pillar. It makes the production Continental, with its blacked-out but still obviously chunky B-pillar, look fussy.

We don't expect Lincoln to build a coupe – that may be too wild for a company that doesn't seem completely comfortable with the notion of reinvention – but these renders were just too good not to share. Let us know what you think in the comments below.