The Wait For A BRZ STI Continues, But In The Meantime The tS Is Damn Good

The Subaru BRZ is a brilliant driver's car: lightweight, rear-wheel-drive, tactile, nimble and fluid at speed. In terms of qualities that allow for dazzling point-to-point performance, it lacks only power and intense mechanical grip. In the US, options for tuning the BRZ to amplify its strengths or diminish its weaknesses are mostly found in the aftermarket. In Japan, meanwhile, driving enthusiasts can start with the factory-tuned model you see above: the BRZ tS. Designed and built with the engineering prowess of Subaru Tecnica International, the limited-edition tS is tuned for track competence over and above that of the base model.

The intent of the tS wasn't lost on me as I stared over the front fender towards Turn 1 at Japan's Suzuka Circuit. Not just a proper place to test STI's claims of increased handling brilliance for its BRZ tune, but a perfect one. Suzuka is challenging – fast and technical in equal measure – and a playground for sorting out the margin of improvement from the standard that BRZ I know so well. 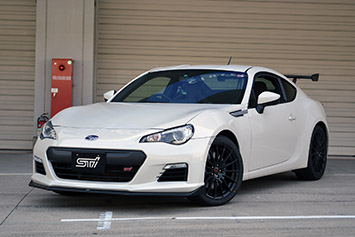 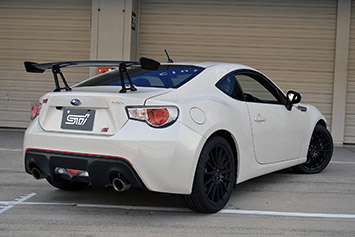 Wait, Why Am I Here?

Of course, Subaru didn't invite me and a half-dozen other motoring journalists to Japan for an academic exercise in JDM hotness. We were there at the behest of STI, as a first step in what will undoubtedly be a deliciously drawn-out expansion of the performance brand in North America.

STI started life as the motorsports division for Subaru-parent Fuji Heavy Industries. But chances are good that you, like me, first encountered the three-letter-logo as a Cherry Blossom Red punctuation mark at the end of a WRX road or rally car. The world came to know STI through Subaru's 1990s WRC dominance and prominence in the Gran Turismo franchise. But outside of Japan the significance of the initials was known more as the designation of the top-dog Impreza, rather than a motorsport and performance engineering unit.

The company is set on changing that and building STI into a performance brand that's as easily recognizable in America as M and AMG are today. That message was delivered a body in the STI Concept car at the New York Auto Show earlier this week, but as I mentioned then, we don't expect Subaru to turn up with a production-ready BRZ STI next year. First STI will deploy its parts catalog to the US, removing the half-hearted Subaru Performance Tuning parts business in the process. Next, according to a vague timeline presented in Japan, Subaru will offer a car like the tS to US customers in approximately 18 months. 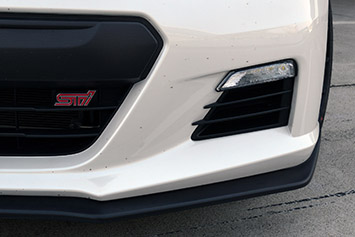 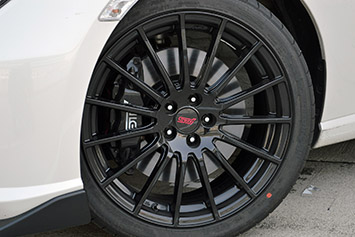 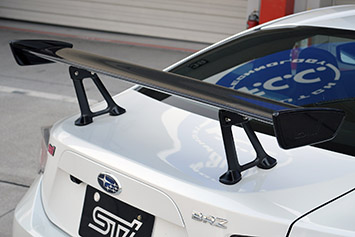 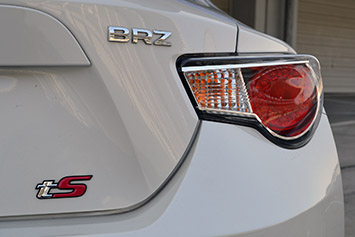 It's helpful to imagine that "tS" stands for "tuned by STI" versus the full STI designation on the WRX model. That is to say the modifications are aimed at improving handling rather than increasing power. Look under the hood of the tS and you'll find the same flexible strut tower brace that Subaru uses on the WRX. A similar spirit led to the development of what STI calls the "flexible draw stiffener," a brace with integrated coil springs that links the front and rear subframes to car's unibody. Like the flexible tower brace, the draw stiffeners add body rigidity for heavy cornering loads, but have enough give to ensure a good contact patch between all four tires and the road.

Those tires are wider and stickier than the stock, 215-section BRZ rubber, too: 225-section Michelin Pilot Super Sports riding on plus-one 18-inch STI wheels. Braking is improved along with grip: the tS runs larger Brembo brakes than the stock car. Just how much larger was a point that was lost in translations, but with four-piston calipers up front the improvement is more than just the extra heat capacity of bigger discs.

Changes wrought by the tS body kit are quite subtle – at least when you discount the optional dry-carbon-fiber tea-tray wing on my test car – as are the splashes of interior modification. A revised exhaust system is evident by the larger tips peeking out of the rear diffuser. Subaru engineers wouldn't comment whether or not the exhaust adds any power, but I can testify that it makes the BRZ sound ruggish and thuggish with the throttle wide open. 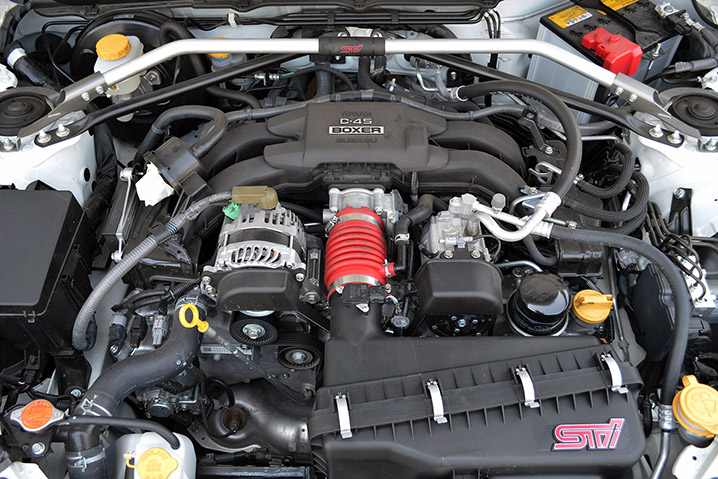 I drove a few laps of the Suzuka's truncated east course in the standard BRZ before familiarizing myself with the tS (and, later in the day, running the full 3.6 miles of racetrack). For all the work put into improving lateral stiffness, the most noticeable change is the grip from the better tires. The added traction had me pushing harder and driving faster through the esses of Turns 3 through 7, and boosted my confidence carrying speed through the breathtaking Turn 15.

(Quick side note: Suzuka is every bit as good as 20-years of video games have lead me to believe. And no, uncountable hours of simulating it didn't get me through the hairpin any quicker. Patience is a virtue.)

Where the standard BRZ's rear end gets loose with aggressive throttle prodding, the sticker contact patches on the tS keep the car in line at far higher loads.

The Brembo braking package is stronger than the base-model setup, too, as I proved to myself in diving deeper and deeper into every braking zone. I never ran more than three laps of the circuit at a time, with one full flying lap between pit out and pit in, but the stoppers seemed as powerful at the end of the day as they were at the start. 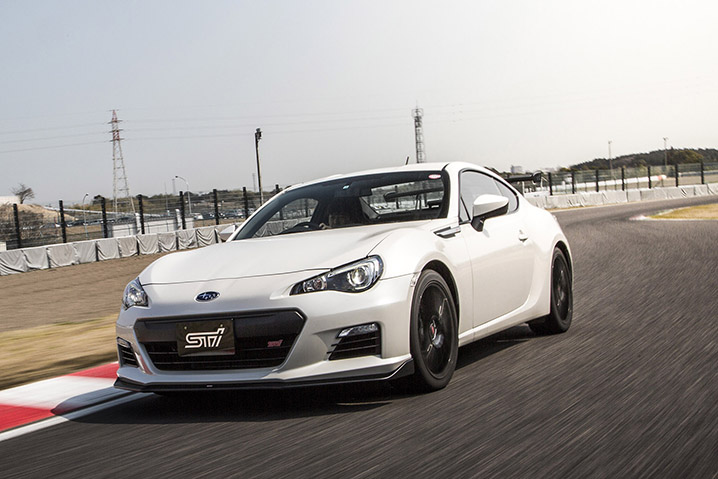 Overall the BRZ tS was significantly easier to control than the one that's currently on sale in the US. Especially because I was learning the track as much as the car, I noticed that mid-corner corrections were easier to execute in the tS, with high-feedback from the steering and chassis putting me in close connection with the rubber and the road. The one sensory letdown is that the tS is quieter than I'd like, but it does sound better with the bigger exhaust pipes.

I'll admit, going into the day I was a little concerned that a stickier BRZ would be more competent but less fun to drive. I've always admired the way a bit of softness in the Subaru makes it more charming on real-world roads when more serious sports cars sometimes leave me cold.

I needn't have worried. I never climbed out of the cockpit without a grin stretching across the too-small Japanese-style helmet framing my face. The magic STI made in tuning this car, with the company's deep knowledge and team of 50-plus engineers, is that the is tS hasn't lost or changed the BRZ's essential character. Home-brew tunings may strike that same balance, but they're just as likely to upset it – yet another reason to get a tS clone stateside ASAP. 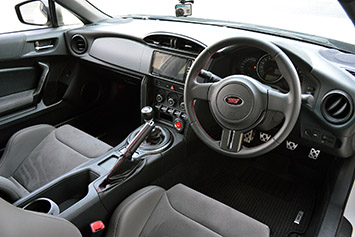 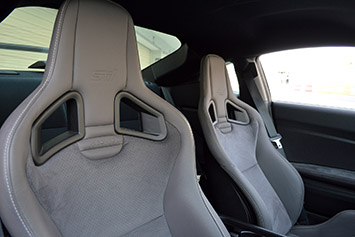 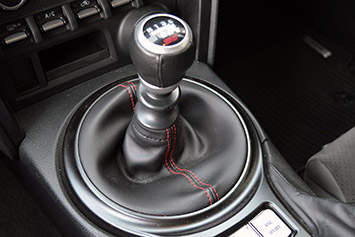 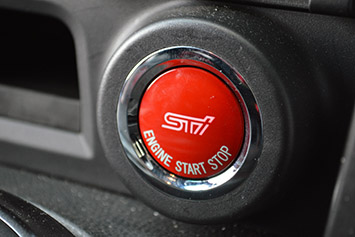 Allow me to revisit a topic that feels irrelevant to this BRZ biopic, but isn't: Subaru of America Director of Corporate Communications Michael McHale's insistent reminders of parent company Fuji Heavy's new business plan through 2020. At the highest level, word has come down that STI will make meaningful increases in its North American prescence. Presumably big increases in revenue will along with that. In a culture where "the business plan" dictates every decision, that means that Subaru and STI are going to be accountable for capturing Americans' attention in greater numbers than ever.

And that, in turn, means that something like this BRZ tS, and eventually even a BRZ STI, are likely realities for you and I. The trip to Suzuka to tell this story is a sort of symbolic first step in the advancement of STI, then. But it's the first step on a long journey.

As I said at the top: We can expect a tuned BRZ not unlike the tS (though not exactly the same, and with a name no one seems sure about) in the medium-term. A 2017-model-year car is a good guess – but just a guess. 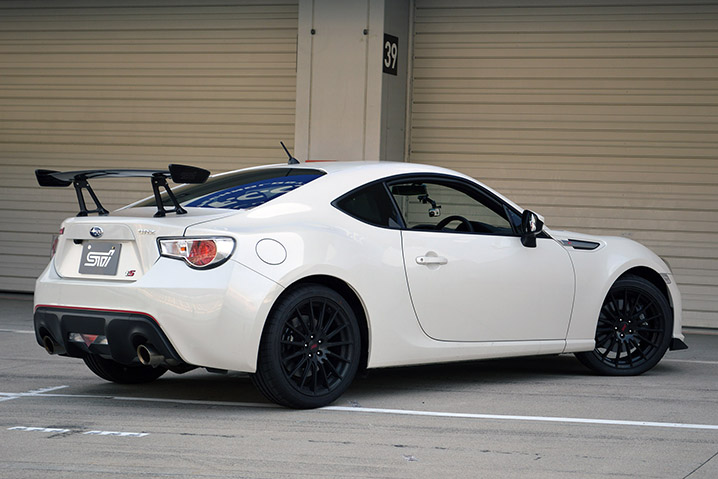 Further ahead, a BRZ with more power – presumed via turbocharging – and a proper STI badge seems like an inevitable next step. No one I pestered in Japan would confirm this, of course, but no one would deny it either.

McHale's answer to that end was that a BRZ STI would be a longer wait still. Adding a turbo-powered engine would require certifying for crash and emissions in the US, meaning a cubic development money increases. I'm guessing that, business plan or no, Subaru is keen to see how a milder tune of the BRZ is received first.

If my experience in driving the tS wasn't enough to sway you, BRZ-fence-sitter, into a potential sale, it's worth thinking of the purchase as an investment in everyone's future. That's a long play, I'll grant you, but when a car as good as this just keeps getting better, it might just pay off.