Has Aston Martin abandoned plans for a Lagonda SUV? 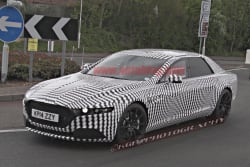 Aston Martin may possibly (hopefully?) axe plans for a Lagonda-badged SUV, according to a new report from the blokes at Piston Heads. If this is true, it'd serve as proof that the auto gods are good, and want us to be happy.

The report is based on statements made by Director of Design Marek Reichman.

" We still have plans for the brand. There might be some surprises in the marque's re-establishment into the market place, but as a very unique coachbuilt experience. And that's probably what's most befitting of the brand," Reichman told PH when asked about the Lagonda SUV, which debuted way back in 2009.

Considering the spy shots we've already seen (inset), PH's conclusion that the Lagonda brand would be reborn as an ultra-exclusive sedan doesn't seem far off. As for the rumors that AM would look to Mercedes-Benz for its SUV architecture, well, it's not looking so good any more.

What do you think? Should Aston Martin launch a sedan above the Rapide? What would you expect in terms of price and performance? Let us know in Comments.