TENERIFE, Canary Islands – After a few minutes rolling through town, the Audi RS Q8’s navigation system directed us to turn onto a long motorway on-ramp. With 591 horses underfoot, we couldn’t resist matting the accelerator. The RS Q8 thundered down the on-ramp, merging onto the freeway already going much faster than the smattering of local traffic. After another moment or two, we lifted off the accelerator, triggering an abrupt multi-gear upshift. In that brief maneuver we experienced the dynamic high and low of Audi’s new ultra-high-performance SUV.

The Audi Q8, the two-row “coupe” sibling of the three-row Q7, already sits at the top of the brand’s SUV lineup. But some buyers want more power, more performance, more swagger. With BMW offering M and M Competition versions of its competing X6, and Mercedes-AMG having given the GLE Coupe the same treatment, it was inevitable that the Q8 would join the club. While a TDI-powered SQ8 exists in Europe, Audi is skipping that model here and jumping straight to the heavy-hitting RS Q8, putting its maximum-performance imprimatur on its range-topping SUV.

Audi’s take on the genre looks big – longer, wider, and taller than either the hunchbacked BMW X6 M or the outgoing Mercedes-AMG GLE 63 S coupe. It also has a greater stretch between the axles. Audi’s more upright liftgate preserves a greater measure of utility, but it also makes for a more blockish profile. The RS variant is more filled-out with its deeper lower fascia, wheel-arch extensions, and a restyled rear apron through which poke extra-large oval tailpipes. The design is embellished with dark-tinted matrix LED headlamps, a honeycomb grille, and a rooftop rear spoiler. The aluminum exterior trim can be supplanted with gloss black or carbon fiber. The RS Q8 hunkers down on giant 22- or optional 23-inch wheels. 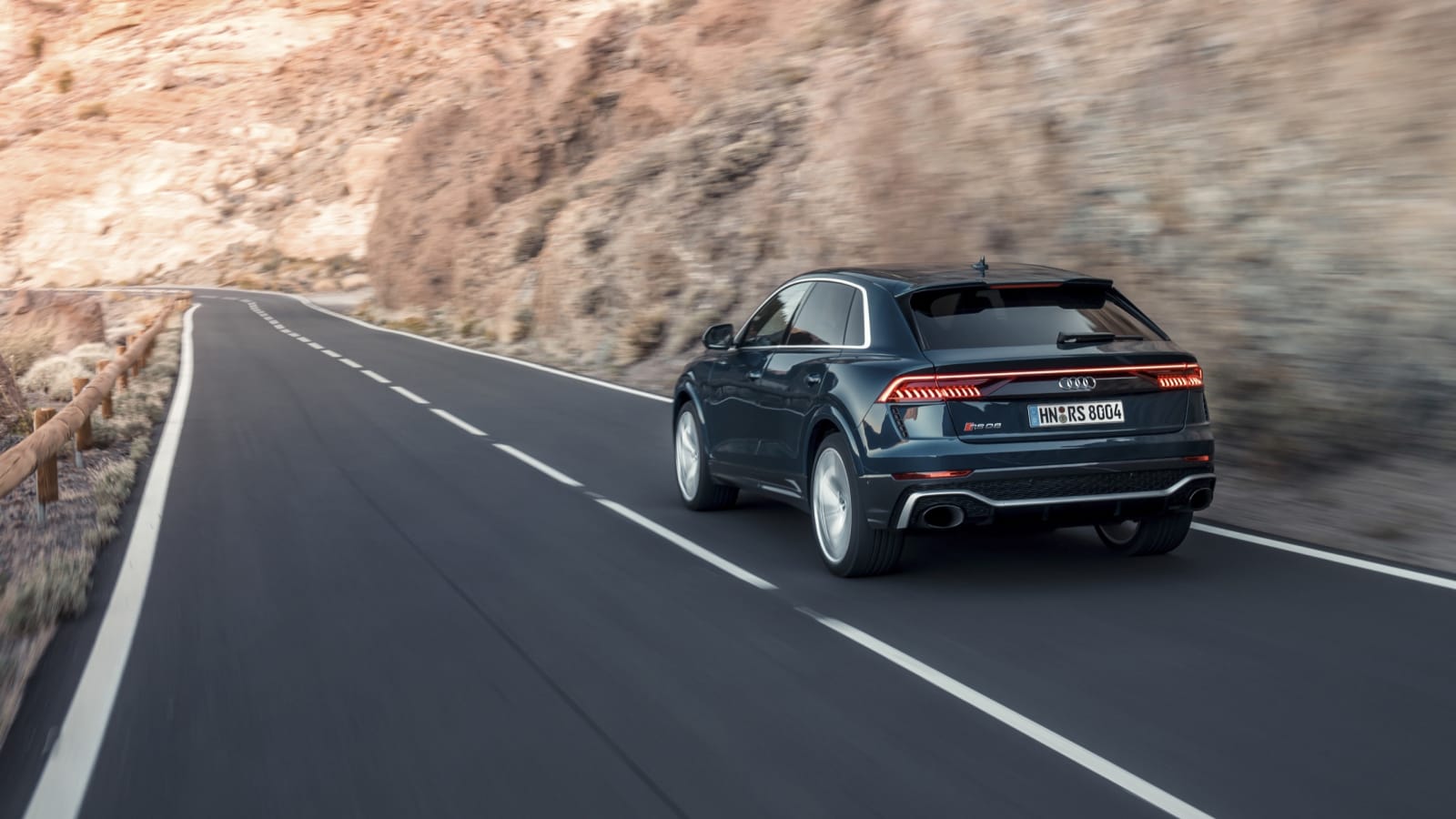 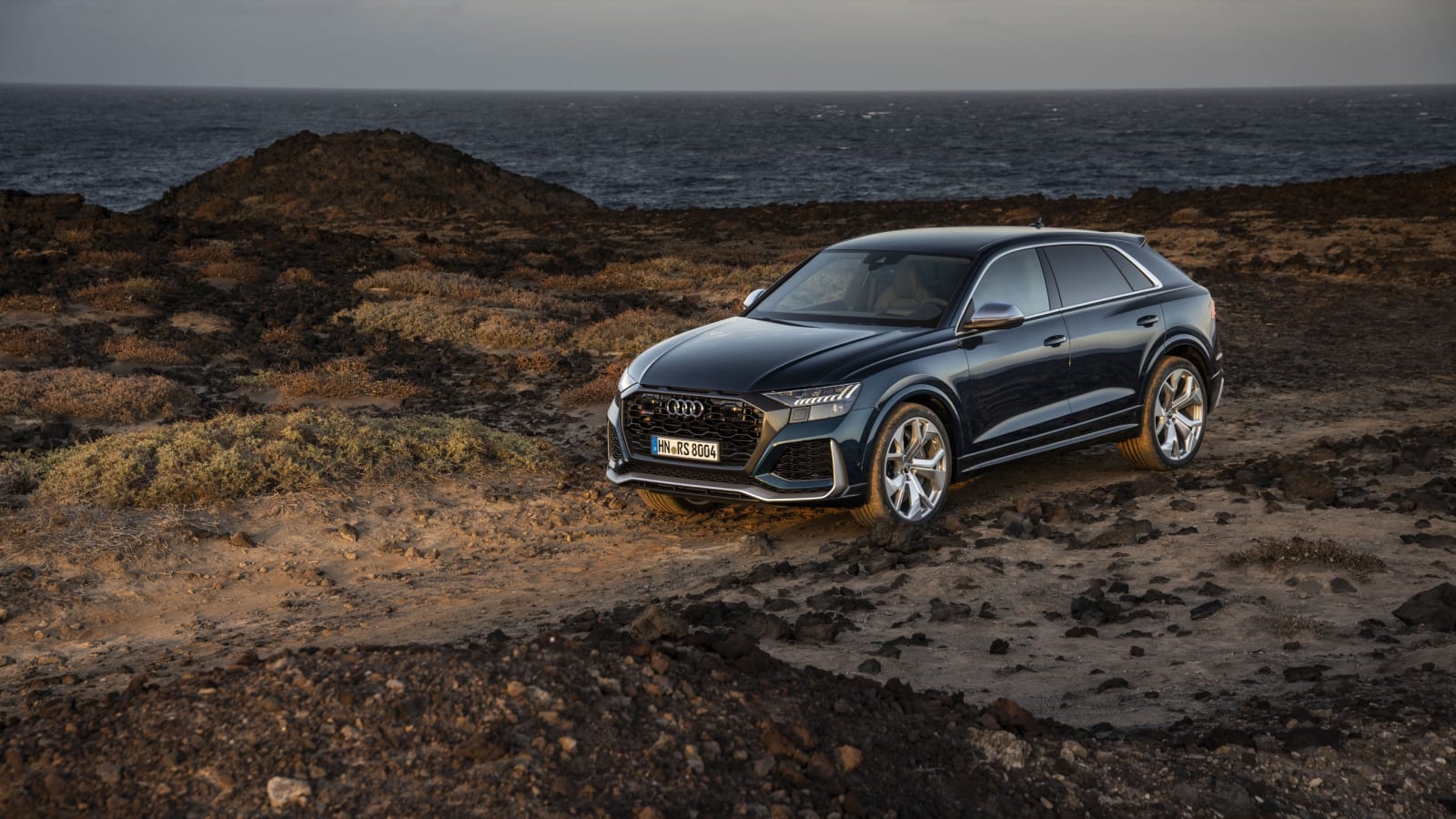 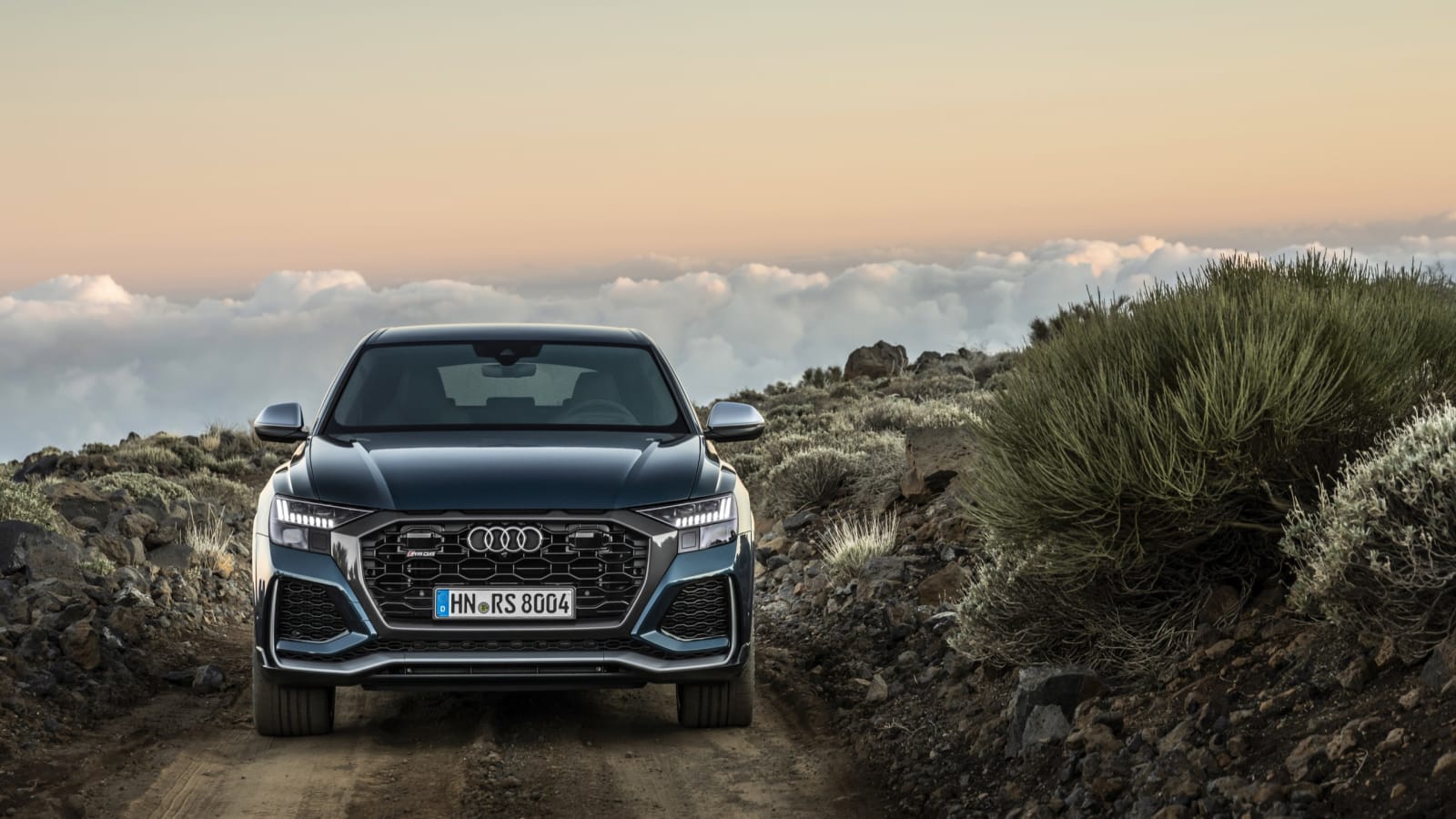 The sport-ified interior features high-backed bucket seats with integral headrests sporting RS logos, and the available Valcona leather has a honeycomb stitch pattern. Alcantara is used on the flat-bottom steering wheel, shifter, headliner, door panels, and sides of the center console. The Q8 does without the Q7’s third row, but it’s rear seat is plenty spacious — and even slides fore and aft — as is the luggage hold.

As in the regular Q8, dual center screens blend seamlessly into the gloss-black face of the dashboard. The central display is a crisp 10.1-incher, and below it is an 8.6-inch screen. Both use haptic feedback, responding to your touch with a reassuring click like physical Audi buttons have for years. The upper screen handles the typical areas of audio, phone, and navigation, the latter enhanced with Google Earth maps. The myriad vehicle settings are here too, and you swipe to move between screens. Apple CarPlay and Android Auto are also supported.

The lower unit primarily handles climate control functions, including the heated/cooled seats and the heated steering wheel. It also includes handwriting recognition for entering destinations. Additionally, there is space at the top that can be customized with shortcuts to oft-used features or favorite destinations. 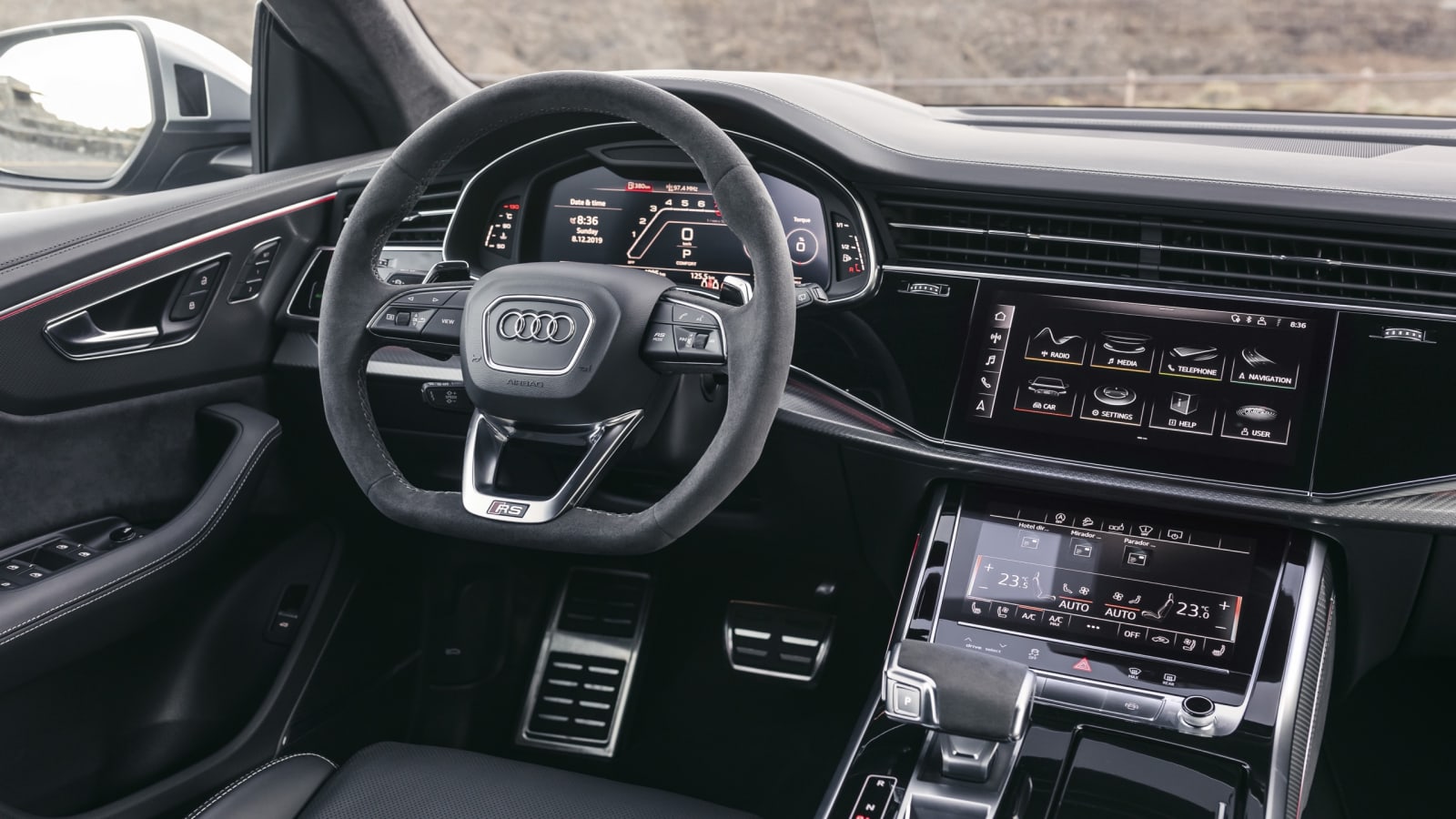 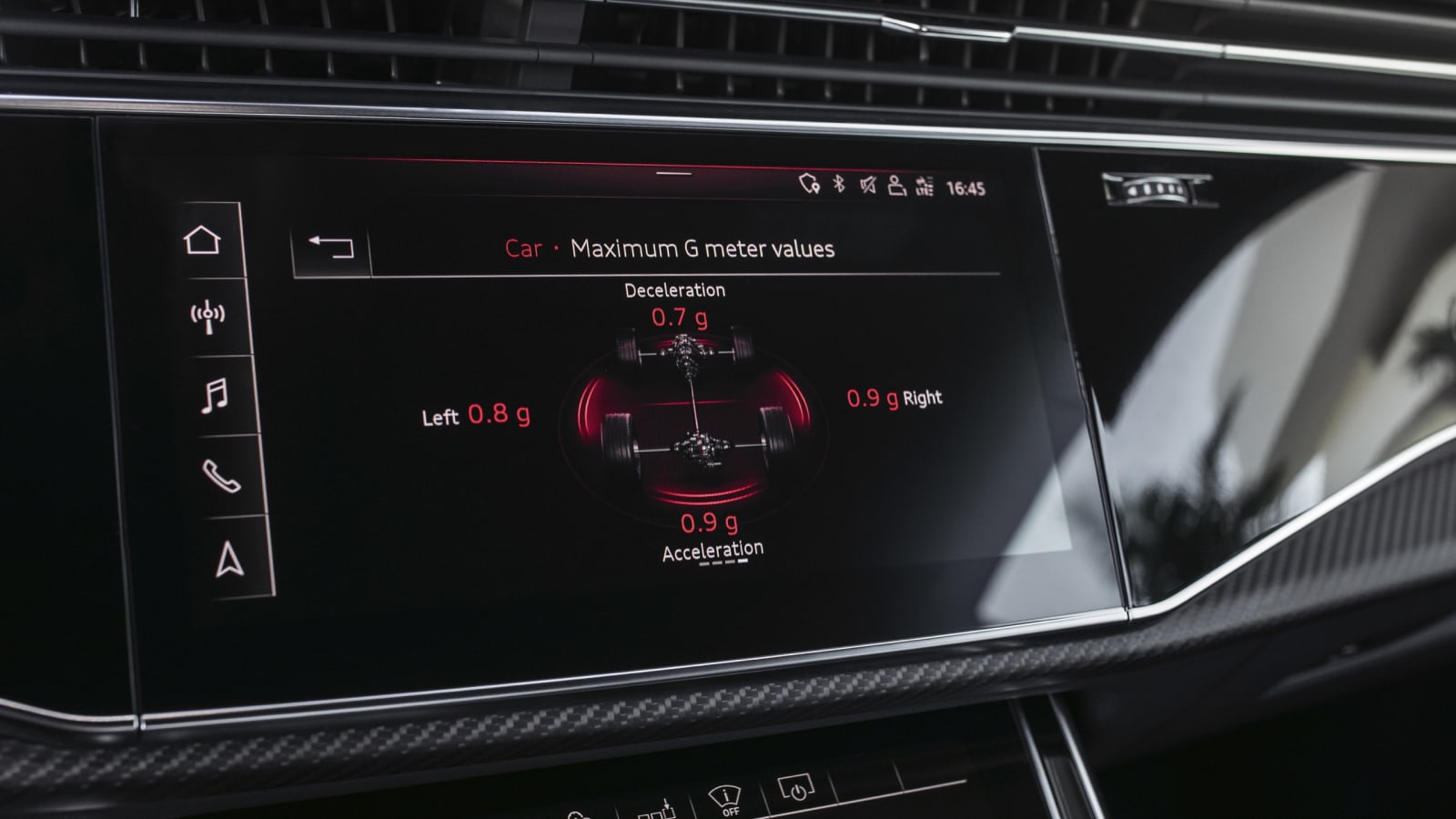 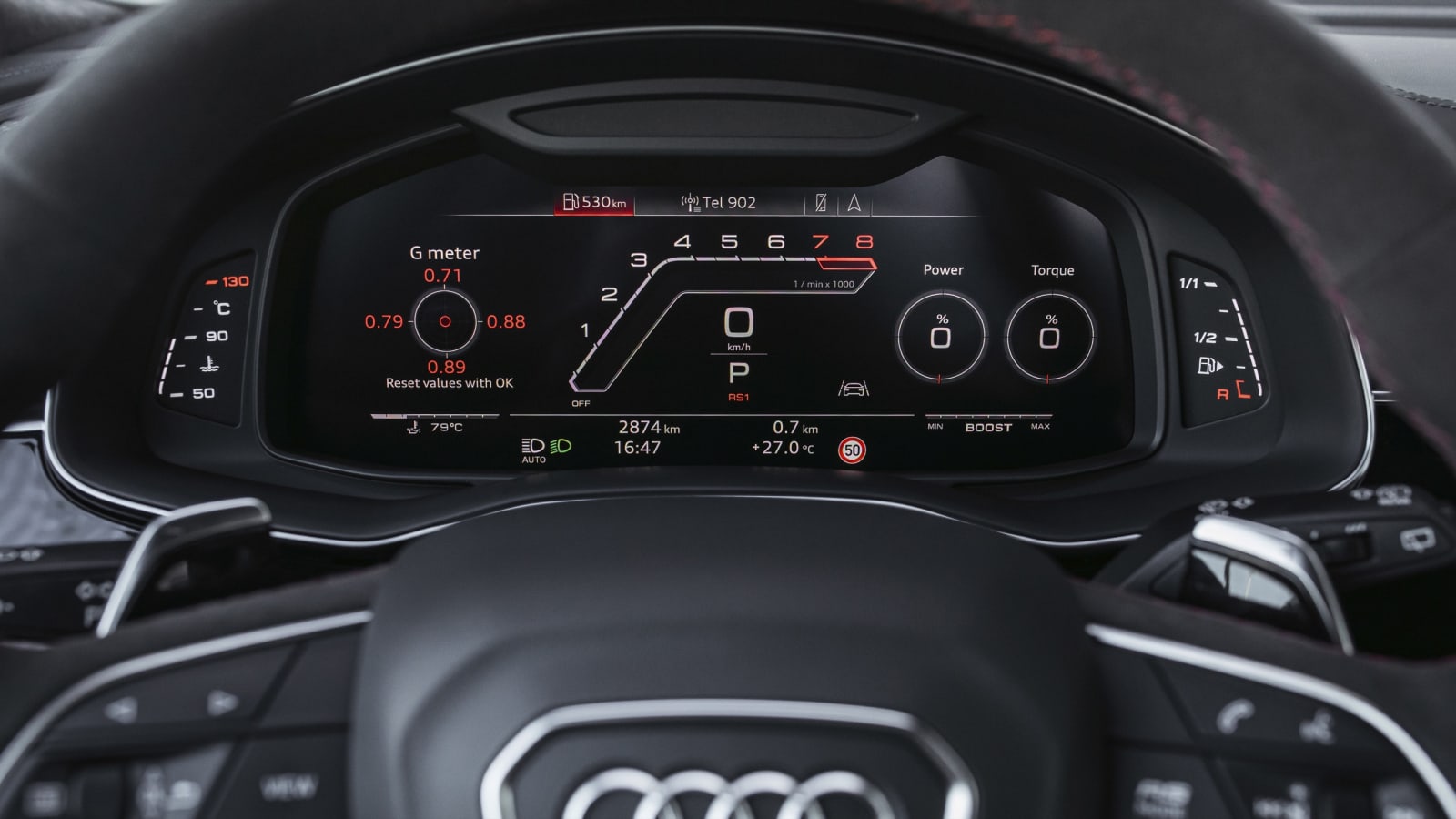 Directly in front of the driver is Audi’s 12.3-inch Virtual Cockpit digital instrument cluster. Although this has been around for a while, it still feels cutting edge, able to push the speedometer and tach to the sides of the display and make room in between for a navigation map, trip info, or more than the usual audio information. Alternately, it can place a digital speedometer and a bar-graph tach at the center. Choosing among the layouts is done via buttons on the left spoke of the steering wheel. The cars we drove also had a head-up display.

Membership in this club requires a certain level of horsepower, and the RS Q8 comes prepared. Audi’s Sport division turns once again to the corporate 4.0-liter V8 with two twin-scroll turbochargers — seen elsewhere in the Porsche Cayenne and Panamera, and Bentley’s Continental GT and Flying Spur. Here, it matches output of the RS 6 Avant and the RS 7 with 591 horsepower and 590 pound-feet of torque, and represents a huge leap over the regular Q8’s 335 hp and 369 lb-ft. (The metric figures are a nice, round 600 PS and 800 Nm.)

As in the other RS models, the V8 is hooked to an eight-speed automatic and Quattro all-wheel drive with a 60% default rear torque bias. A 48-volt mild hybrid system also is on hand, but instead of adding torque to the powertrain it merely expands the stop/start capability and powers the active anti-roll bars. (In other markets, it also allows for engine-off coasting, but that feature is disabled in the States.) 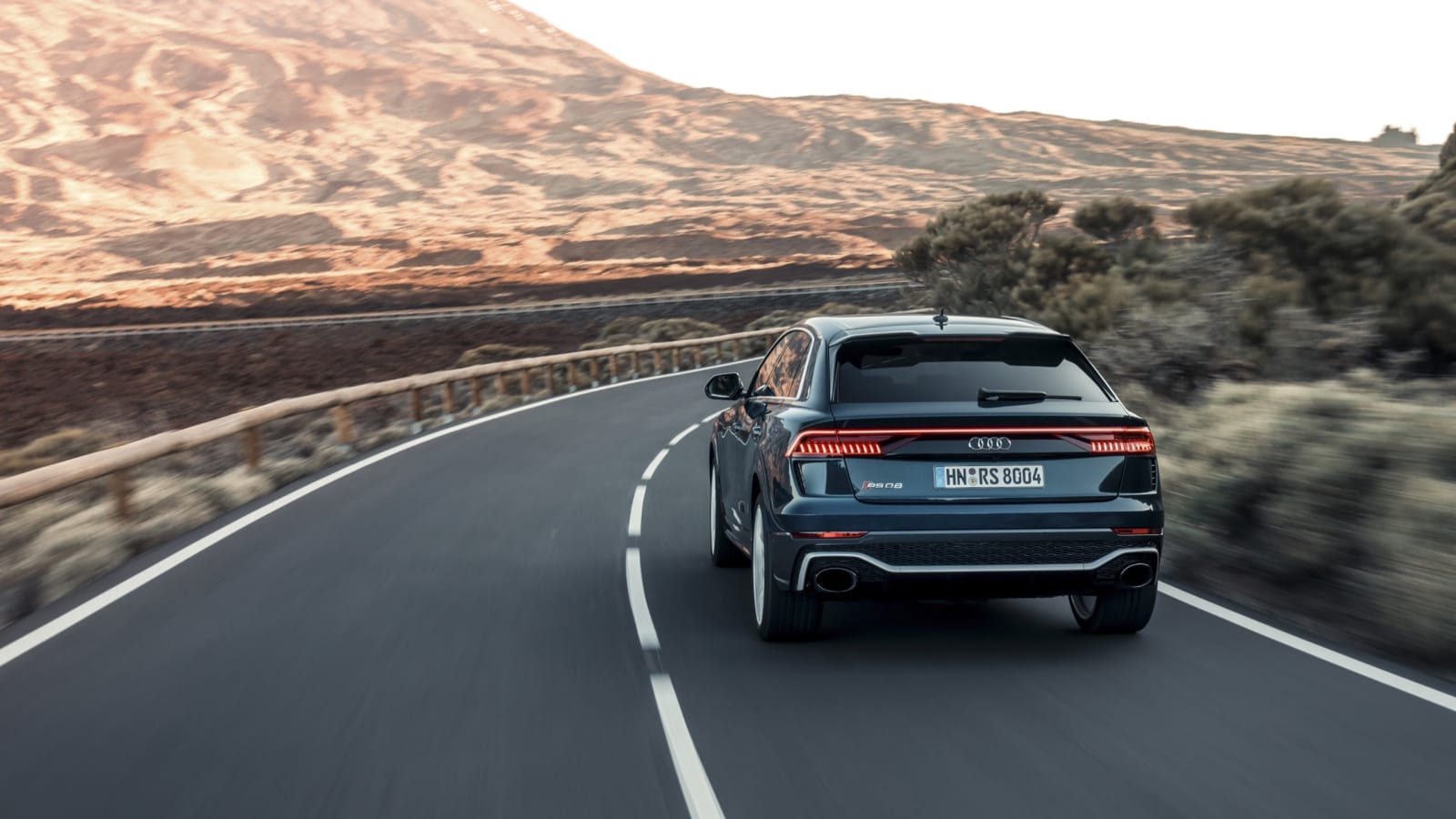 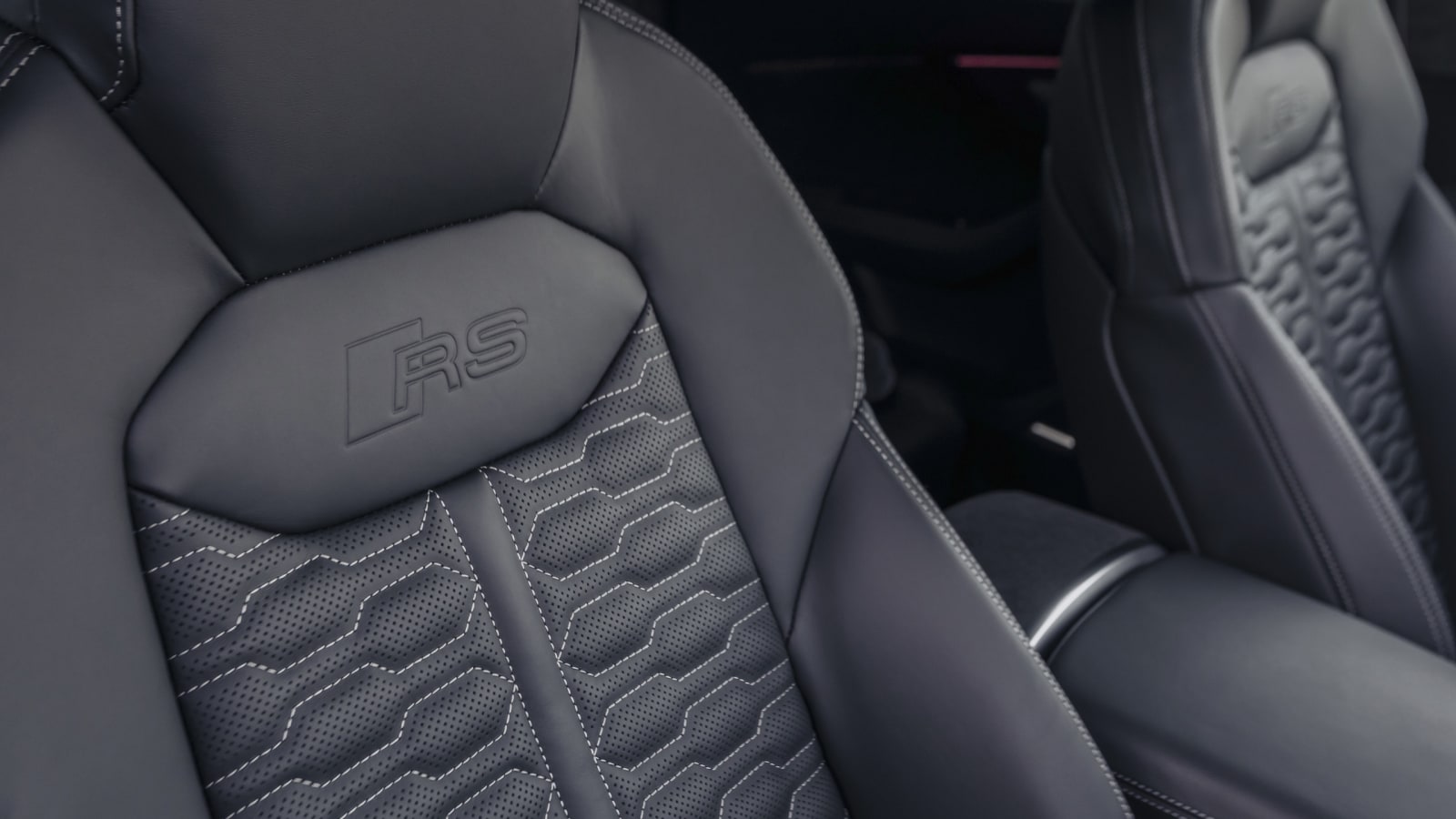 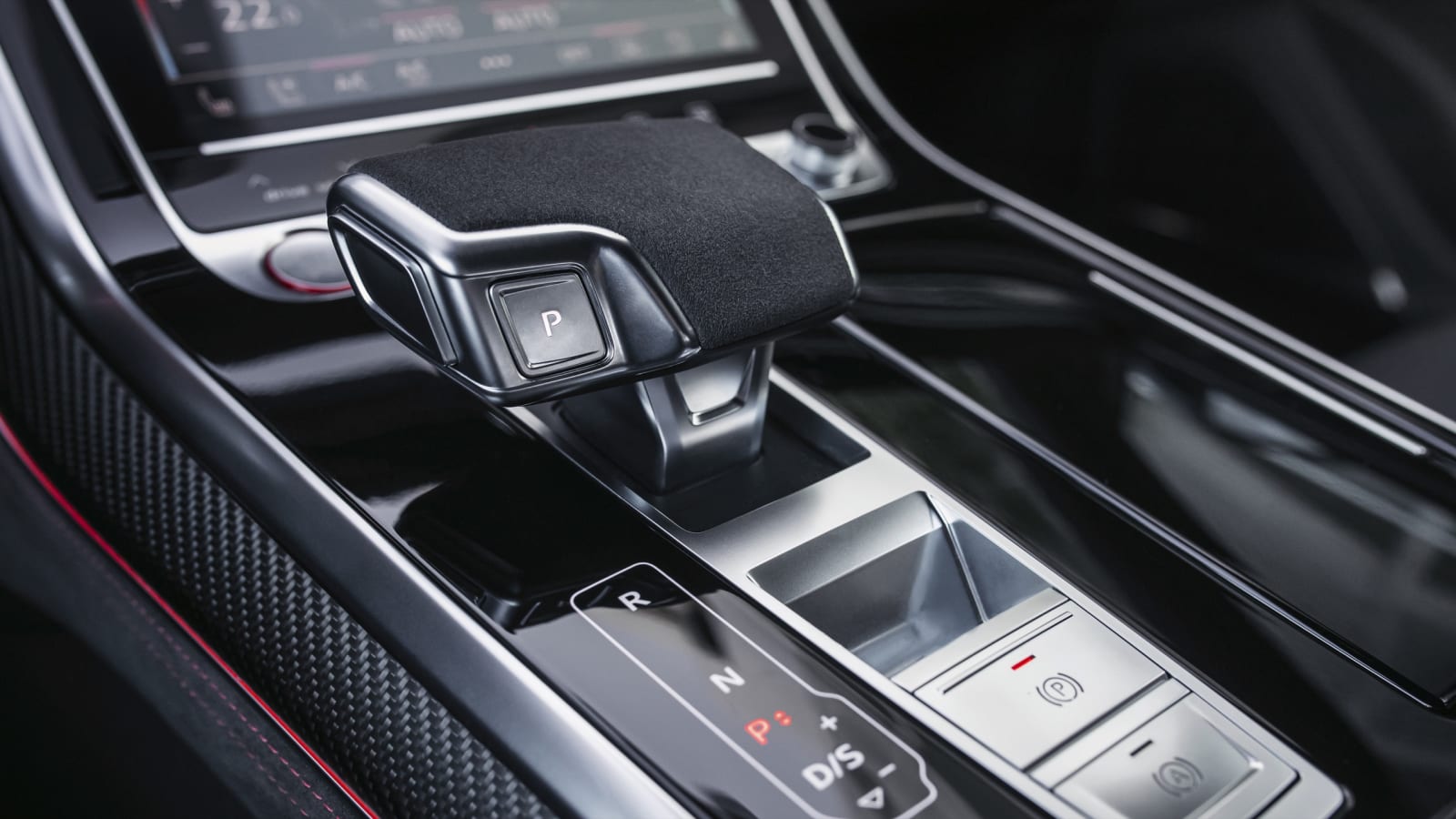 In a twist on the Teddy Roosevelt dictum, this genre of ultra-sport SUVs speaks loudly while carrying a big stick. The RS Q8 includes a three-mode exhaust system, with the loudest setting providing the requisite basso rumble. The extroverted exhaust note is paired with the Dynamic drive setting, although one can use either of the customizable RS1 or RS2 settings (which replace the regular Q8’s Individual mode) to access the sportier powertrain and suspension without the louder exhaust. Or vice versa.

While the standard active anti-roll bars in concert with the firmer programming of the adaptive air springs effectively squash any lean in corners, they do little to inhibit squat under acceleration. Leg the accelerator, and the RS Q8’s nose rises like a Chris Craft speedboat as the car rushes ahead. In either the Dynamic drive mode or the transmission’s sport mode (accessed by toggling the shift lever down from drive), the eight-speed automatic gearbox reacts instantly to a booted throttle. That it’s a willing co-conspirator means there’s less reason to tickle the shift paddles and call the shots yourself. The downside is abrupt upshifts when the driver lifts, as we saw on that onramp blast. There was no sign of that behavior in Auto or Comfort drive settings, but there the throttle mapping seemed to require an inordinate amount of pedal travel before waking the V8 — the sportier modes gave the snappy part-throttle response one would expect from 591 horses.

At full gallop, those horses can hustle the RS Q8 from zero to 62 mph in 3.8 seconds, just 0.1 second off the 0-to-60 mph time of the Cayenne Turbo Coupe. Spring for the optional Dynamic Package Plus — you know you will — and the top speed limiter is increased to 189 mph, which outpaces even the top-dog Turbo S E-Hybrid version of the Cayenne. For further barroom bragging rights, make note that the RS Q8 managed a Nürbürgring lap time of 7:42.3, which at this moment is the best of any SUV (ending the brief reign of the previous champ, the Mercedes-AMG GLC 63 S). 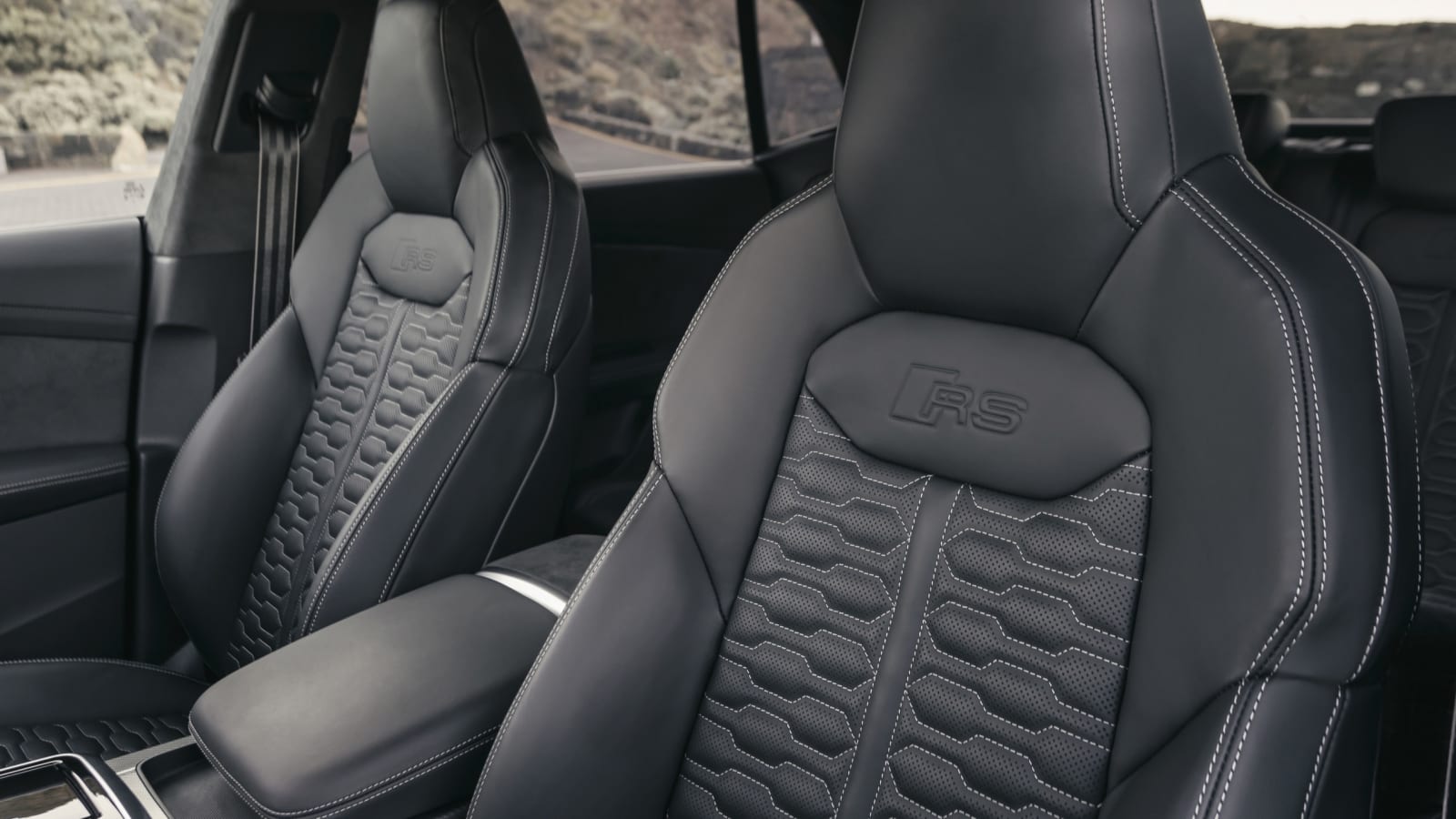 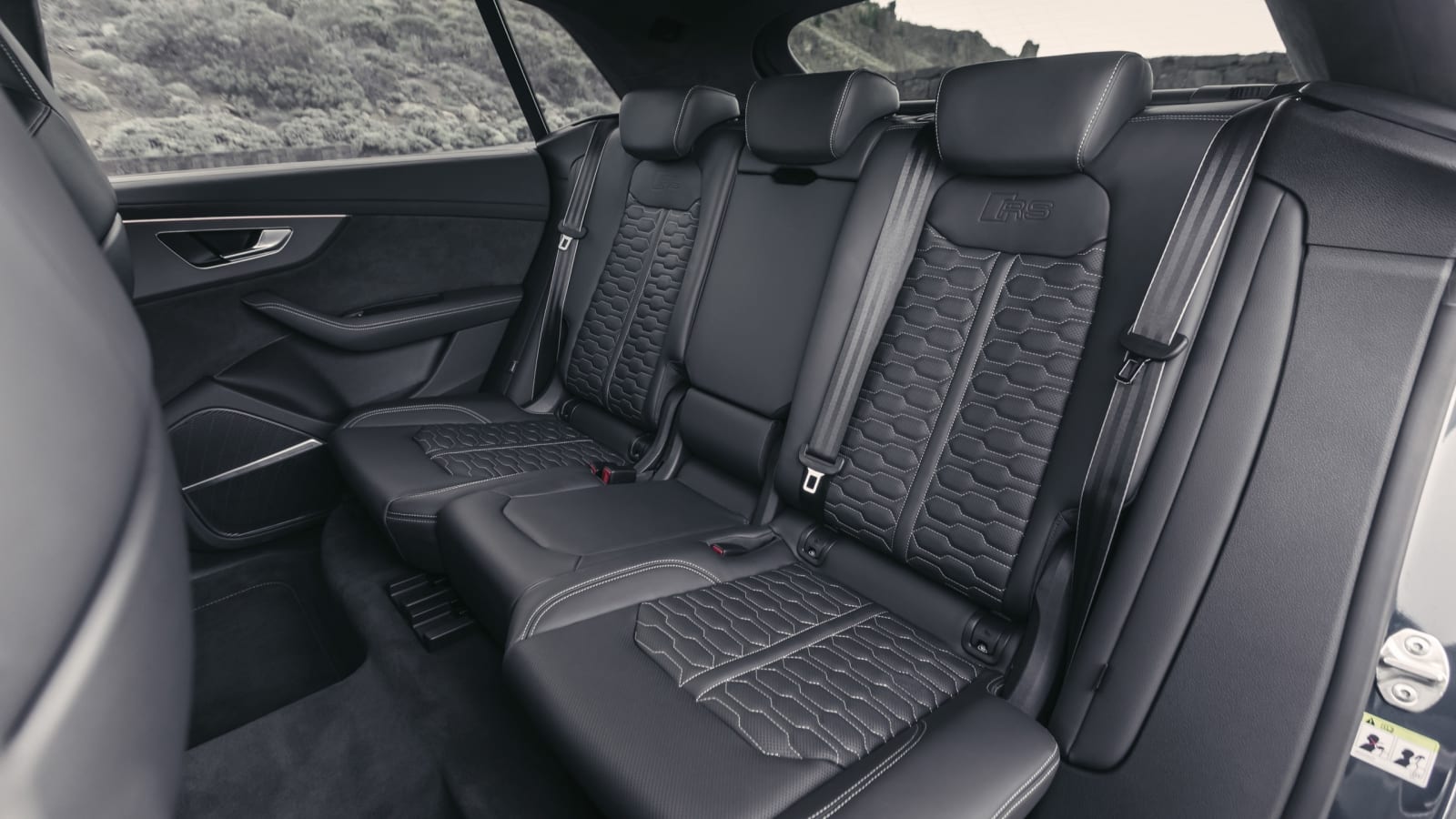 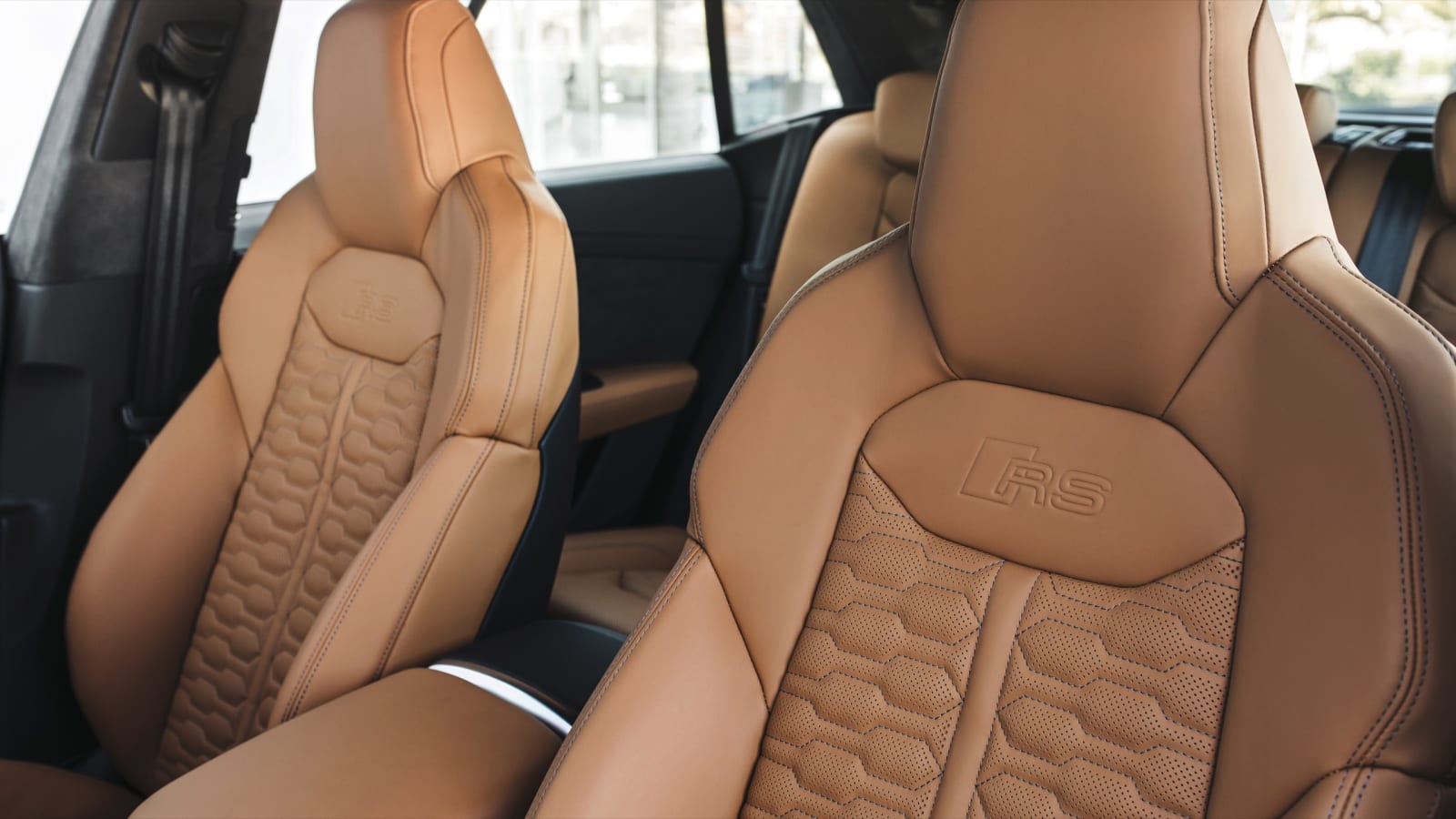 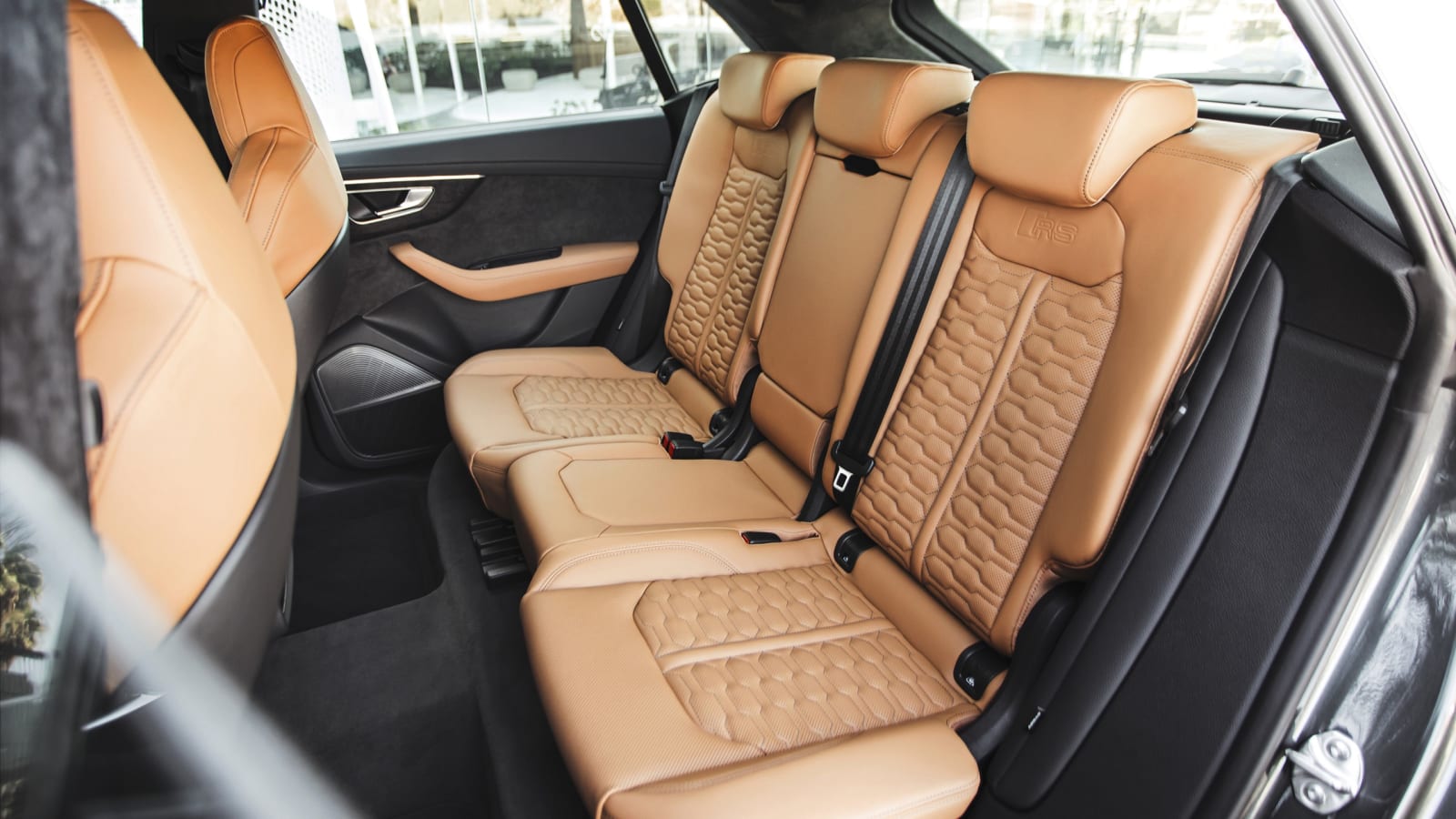 That Nürbürgring achievement indicates that there’s more here than mere straight-line performance. Audi calls upon a full measure of technology in order to make this bear dance. Besides the aforementioned air springs and active anti-roll bars, the RS Q8 has rear-axle steering and Audi’s sport rear differential that shunts torque from side to side, and all of that kit is standard on U.S. cars. Of those, it’s hard to call out any single component, but we will say that through tight corners as you transition from braking on entry to accelerating on exit, the sport differential can be felt subtly tightening the car’s line as you lay on the power.

We had ample opportunity to experience it at work, as there were many tight corners on our mountainous drive route in Tenerife, the volcanic island off the north African coast that’s favored by pasty, sun-seeking Europeans. We shared the roads with sight-seeing tourists in rental cars, and the RS Q8 dispatched them with just a twitch of the right ankle in even the briefest passing zones. Tererife's roads also are extremely narrow, with sharp drop-offs everywhere and guardrails only sometimes, which gave us an appreciation for the gobs of grip from the massive 295/40-series tires. The RS Q8’s steering benefits from stiffer front suspension bushings than the standard Q8 and is precise and decently weighted, although it’s not quite a tactile as a Cayenne’s.

We were happy to not take an unplanned excursion off into the rocky moonscape that covers much of Tenerife, even if the RS Q8 does maintain a claim of off-road capability. The air suspension is able to raise the vehicle up to 2.0 inches (at speeds below 30 mph), the drive modes include both Off-Road and Allroad settings, and hill descent control is standard. 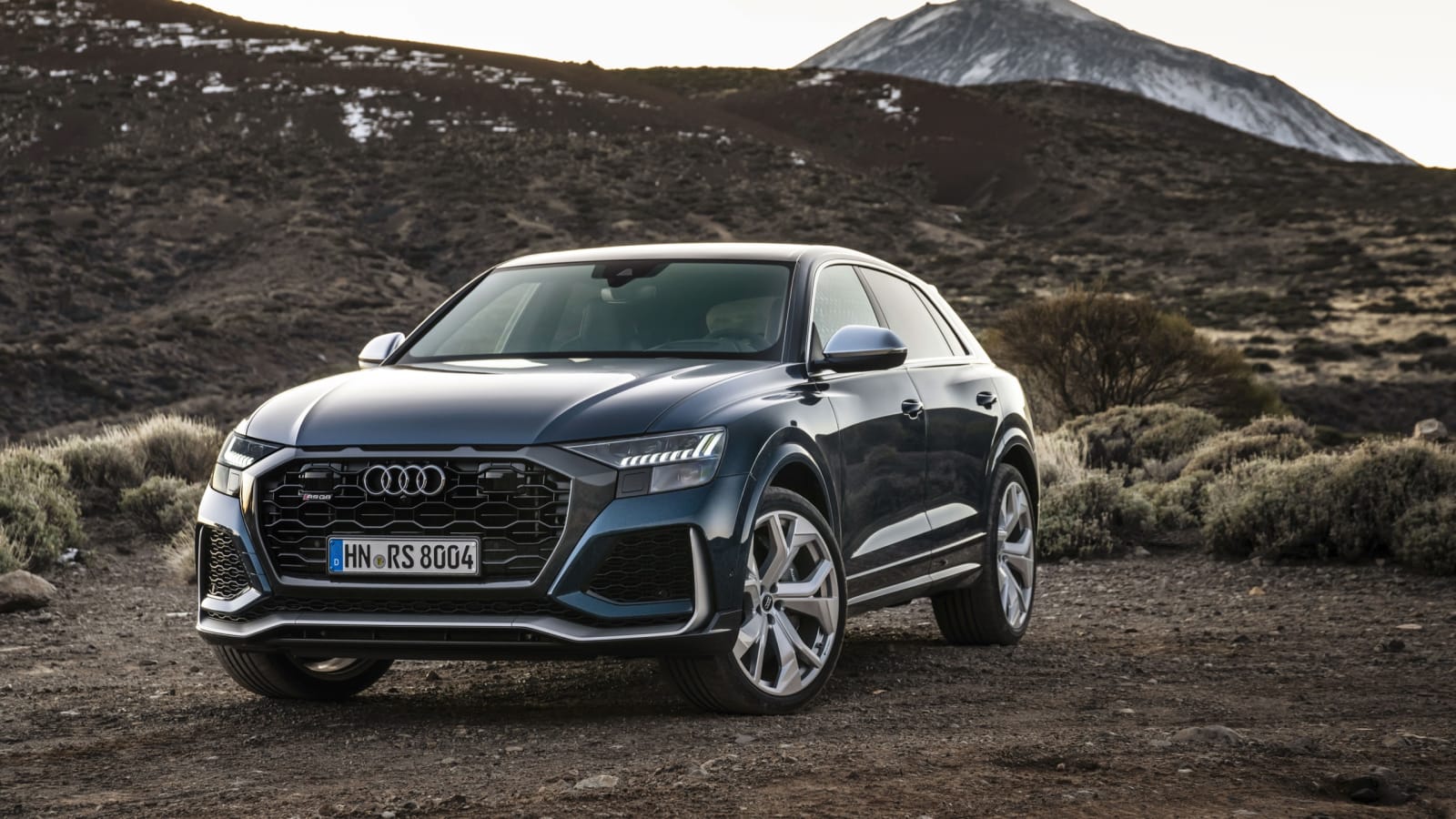 We were less enamored of our RS Q8 ‘s optional ceramic brakes, which in the U.S. are expected to be paired with the Dynamic Package Plus. Their calipers are available in a choice of red, gray, or blue and squeeze 17.3-inch front rotors and 14.6-inch rears, and although their fade resistance can’t be faulted, they’re low-speed modulation takes some getting used to.

We previously have said, “the Q8 isn’t a sports car and is never going to drive like one.” Even in RS form, the Q8 still doesn’t. But it becomes part of a club whose cornering abilities manage to bend the laws of physics, and it excels at inhaling stretches of tarmac in great gulps. Those qualities, along with its amped-up appearance, earn the RS Q8 a place at the table — even if, all things considered, it fits in better than it stands out. 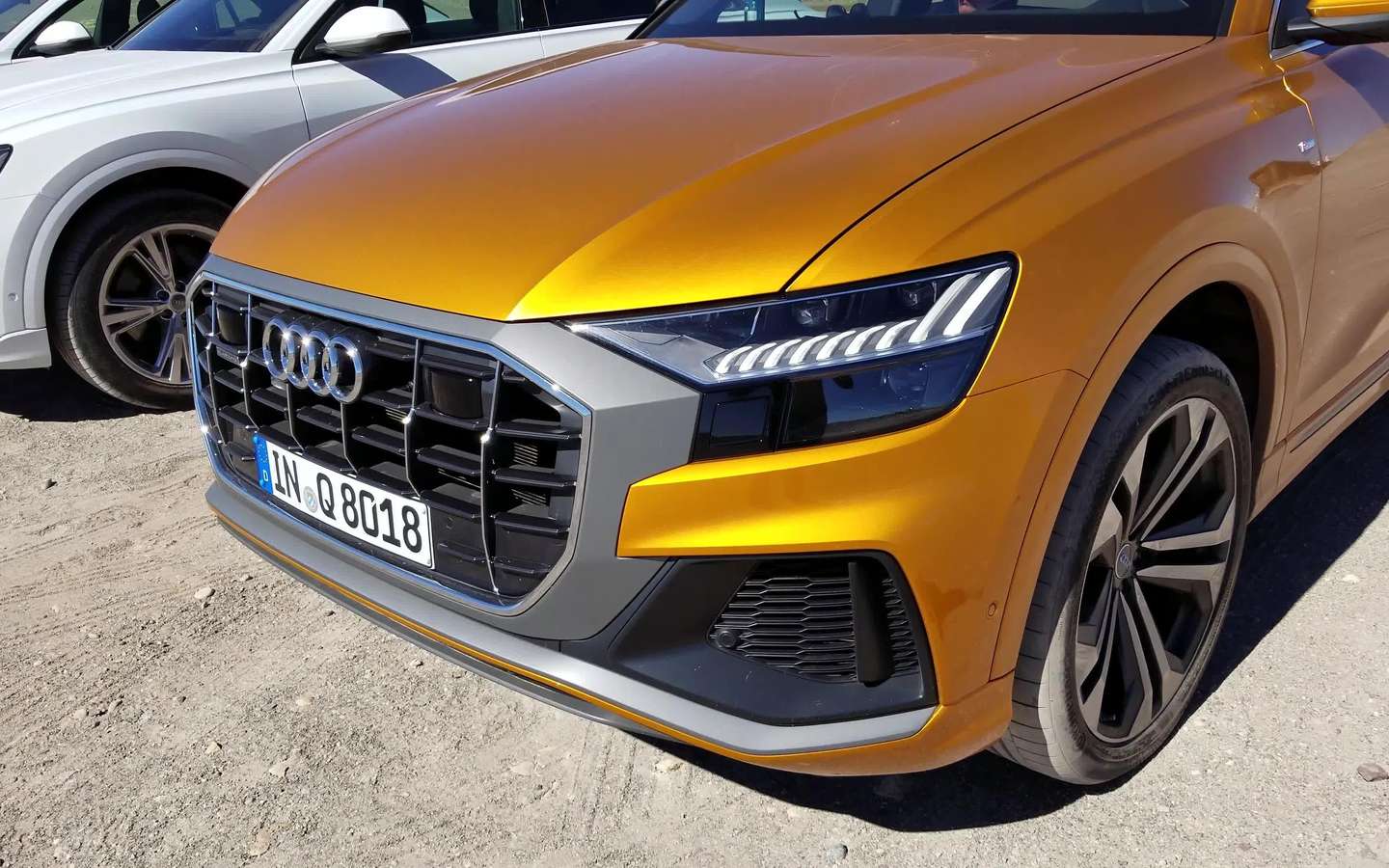