Best and worst car brands of 2022 according to Consumer Reports It's that time again, Consumer Reports this morning lifting the curtain on its 2022 Annual Car Brand rankings and its 10 Top Picks in the car, crossover, and truck category. Drumroll, please: This year, Subaru climbs two spots to claim the winner's circle, having come third the last two years. Last year, Mazda climbed three spots from 2020 to take the crown. This year, Mazda slipped to second, BMW taking the last spot on the podium, also a one-spot drop from 2021. Six automakers in the top 10 hailed from Japan, which is one more than last year, and five luxury makers occupied the top 10, which is two more than last year. And South Korean representation didn't crack the top this year, after Hyundai managed tenth last year. The seven makes after BMW are: Honda, Lexus, Audi, Porsche, Mini, Toyota, and Infiniti.

The magazine and testing concern says its Brand Report Card "[reveals] which automakers are producing the most well-performing, safe, and reliable vehicles based on CR’s independent testing and member surveys," and that "Brands that rise to the top tend to have the most consistent performance across their model lineups." 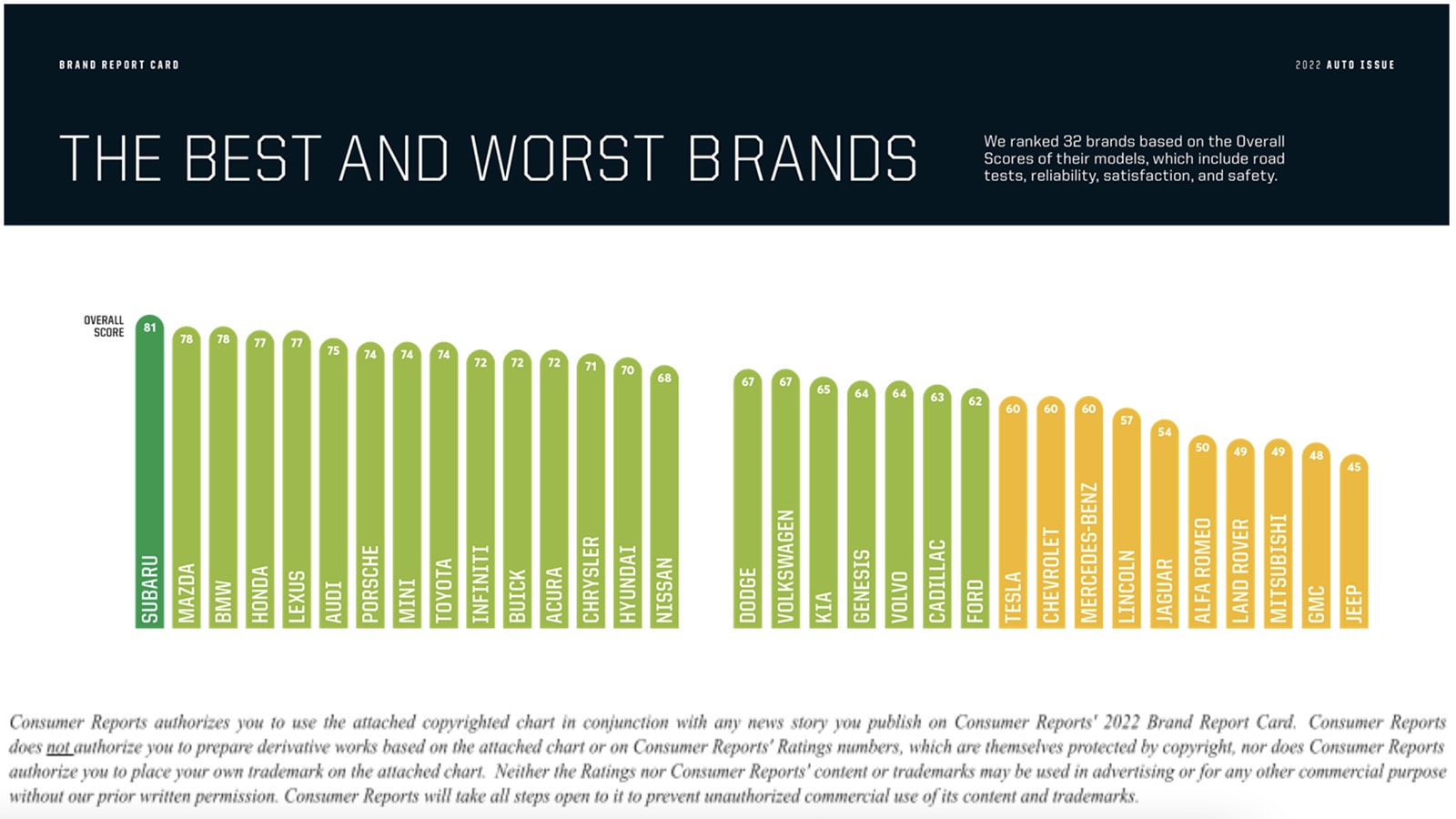 The domestics also took steps back among the 32 OEMs ranked on the 2022 card. Chrysler and Buick were the domestic carmakers who made last year's top 10 in eighth and ninth, respectively. This year, Buick dropped to eleventh, Chrysler to thirteenth. Dodge went from fourteenth to sixteenth. CR continues to ding Tesla's yoke steerer, the not-exactly-natural handhold responsible for the electric carmaker going from sixteenth last year to twenty-third this year. And issues with the Gladiator dragged Jeep down three places to 32nd — last — sparing Alfa Romeo that ignominy again.

Over in the Top 10 Picks, each winner is chosen based on category and purchase price, the outlet crediting the chosen models for being "the best of the best in CR’s ratings: they perform well in road tests; they come standard with key safety features; and owners say they are reliable and satisfying to drive." Affordable entries that also included the best safety gear like automatic emergency braking with pedestrian detection received special consideration. The carryovers from last year's Top 10 Picks are the

And CR, grabbing another seat on the green train, disbursed additional accolades for those picks that emit the lowest amount of greenhouse gasses and other pollutants, namely the Ford Mustang Mach-E, Honda Accord, Nissan Sentra, Toyota Prius/Prius Prime, and Toyota RAV4 Prime. It's also worth noting that the Mach-E dethroned the Tesla Model 3 as the top electric pick from CR.