As used-car prices climb, even wrecked cars have gotten expensive

Copart Inc. is a $34 billion company that specializes in auctioning off wrecked cars that insurers deem too damaged to justify the cost of repairs. The insurance companies and other sellers — which include banks, charities and, increasingly, used-car dealers — get what’s recovered in the auction, but they also pay a fee to Copart that in many cases increases proportionally with the value of a vehicle. Late Wednesday, Copart reported record revenue and earnings that handily beat analysts’ estimates, thanks in no small part to what the company said were the highest-ever selling prices for the vehicles auctioned on its platforms.

Global average selling prices climbed 20.7% in the most recent quarter relative to the same period in 2020. That compares with a 48% spike in the three months ended in April and a 35% surge in the quarter before that. These numbers don’t simply reflect easy comparisons from the year earlier. Prices have gone up at Copart auctions in every quarter except one since the start of fiscal 2018; the one slip was the three-month stretch that covered some of the worst of the pandemic lockdowns from February through April 2020. 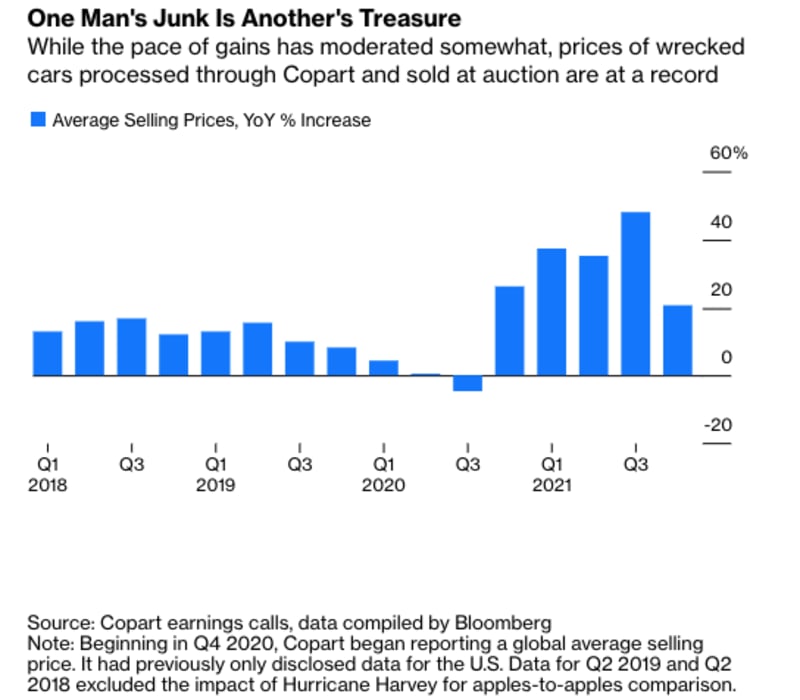 There are a few reasons junked-car prices are skyrocketing. For one thing, “junked” may be a bit of a misnomer in some cases. Traditional buyers of cars processed through Copart have included scrap yards and companies such as LKQ Corp., which dismantles older vehicles and reconditions their parts to be sold in collision-repair shops. But as vehicles have gotten more technologically sophisticated, with sensors crammed into every possible nook and cranny, even fender benders are increasingly expensive to fix. This gives insurers a greater economic incentive to declare a banged-up vehicle totaled and sell it through Copart rather than try to repair it. But that also means a growing number of junked vehicles are relatively new and can be made workable again. “If you visited some of our yards, you would be astonished by some of the high-value Range Rovers and European vehicles that you would see on the lots that at least on their surface look perfectly good and perfectly functional — and in many cases are,” President Jeff Liaw said on a call Thursday to discuss Copart’s results.

These cars are more valuable and attract a much bigger pool of potential buyers — especially in emerging economies, where safety regulations can be less strict and there’s a burgeoning appetite for patched-up cars from the U.S. and Europe. Copart has been particularly adept and early at targeting this international market, which is the biggest driver of growing demand. As of 2019, about three-quarters of the vehicles sold on Copart’s U.S. website received at least one bid from an international purchaser. But the current tight market for used vehicles in the U.S. may also inspire more domestic car shoppers to consider a salvaged vehicle with some minor wear and tear instead. Meanwhile, supply-chain logjams in the automotive industry are causing parts shortages, which boosts demand for recycled components. Higher metal prices also increase the amount scrapyards are willing to pay for wrecked cars. The more interested bidders, the higher the price.

Used-car prices are rising sharply, too: They were up 19% in August relative to a year earlier, according to the seasonally adjusted Manheim U.S. Used Vehicle Value Index. In theory, that could change the economic calculus for insurers and convince them to repair, rather than total, a vehicle. But it’s all relative, and as much as used-car prices have climbed, they haven’t caught up with the returns from salvaged vehicle auctions — at least not yet. The rise in used-car prices also feeds into what Copart can get for a car at auction; salvage prices are typically calculated as a percentage of the vehicle’s undamaged market value.

These trends have made Copart something of a Wall Street darling; it was the best-performing industrial stock on the S&P 500 in 2019. When I last wrote about the company that year, I commented that its valuation (which was higher than that of Apple Inc.) was looking a little heady after such a stellar run. Well, Copart’s market value has nearly doubled and its valuation has moved even higher, to about 24 times forward earnings before interest, taxes, depreciation and amortization as of midday Thursday. That’s still higher than Apple and roughly tied with Microsoft Corp. It turns out there’s a lot of money in wrecked cars.