Yep, we bought one Since my family was expecting our second child, my wife, Cat, and I had been planning to replace her Mercedes-Benz GLK 250 BlueTEC with something larger. It would be her daily driver, and it needed to be big enough to fit two kids in car seats, two dogs (one of which is huge), a cooler and several duffels and totes or whatever else we’re hauling luggage in. As such, Cat had designs on a three-row utility vehicle with captain’s chairs. It would need to be able to travel 250 miles, loaded up, in hot or freezing weather, so an EV was out of the question (not to mention the lack of options in that category). Currently available three-row PHEVs are prohibitively expensive, and we had already passed on the opportunity for a used Chrysler Pacifica Hybrid minivan. Also, Cat really wants all-wheel drive. As far as traditional hybrids, there’s the Toyota Highlander, but the tiny rear seats were a drawback, and Cat doesn’t dig the styling.

So with Cat’s other very particular criteria — which are often difficult for me to even comprehend, let alone attempt to explain in a single post — we whittled the list down to a small handful of vehicles, with the Volvo XC90 and Hyundai Palisade vying for top billing. And so the list remained for months as uncertainty kept our checkbook tucked away.

Then Autoblog took possession of our long-term 2021 Hyundai Palisade Calligraphy AWD, and I was the first staffer to take a turn in it. I already fancied the Palisade and the mechanically related Kia Telluride after my previous short stints in those vehicles. Then, this spring, as vaccines became available, our fears abated and our wanderlust waxed something fierce, we loaded up that Palisade with our two children, two dogs, a cooler, a stroller, a Pack ‘N Play and a week’s worth of luggage, and we hit the road for a weeklong road trip from Michigan to the Outer Banks of North Carolina.

That sealed the deal. As I wrote in two updates about our long-term Palisade, it served us beautifully for those eight days and nearly 2,000 miles. Everybody was happy with the vehicle. If it worked for us in this extreme use case, it could certainly be more than comfortable for our frequent, more regional family road trips. We searched inventory at nearby dealerships, and Williams AutoWorld in Lansing appeared to have what we wanted, which was essentially a carbon copy of the Autoblog long-termer. Alas, it sold, but Williams had another one like it coming in about a month. I had a good experience buying my 2004 Subaru WRX from Williams Subaru many years ago, and the Hyundai outfit seemed just as accommodating and trustworthy, so we claimed it, and we waited as another Palisade Calligraphy AWD made its voyage by sea to the United States.

We picked it up earlier this month, and it seemed only right to break it in with a trip to our cottage, kids and dogs aboard. Actually, we did that twice.

The feeling of driving to our cottage as a family in a single vehicle was superb. The kids were happy. Our 5-year-old son, Wollie, was content chatting with us or watching science shows on his tablet plugged into the USB port in the back of the front passenger seat. Our 7-month-old daughter, Lola, appreciated the sunshade on the window and, when she did get fussy, the nature sounds included in the Palisade’s infotainment system. I loved being able to plug my computer in the back of the center console and get some work done, though my heavy adapter has a tendency to pull out after a while.

Cat, though, had the most to deal with. She had never had adaptive cruise control before, and had trust issues. She’s never had lane warnings, nor lane centering for that matter, nor blind-spot cameras. Nor a head-up display. Not even a backup camera. So I asked her what she thinks.

She still doesn’t quite trust adaptive cruise control — and a healthy dose of caution is a good thing here. Better to find the limits of its capabilities slowly and in a controlled manner. I’ve had years of driving different cars with different systems to be able to get pretty comfortable with them and eventually appreciate how they can smooth out the drive. I’m confident Cat’ll get there soon.

She loves the cameras. Compared to parking a smaller vehicle without cameras, having a surround view helps manage a bigger vehicle. She still feels like she needs to create space for herself when she parks (someone dinged our open door by backing out as I buckled the baby into her seat). As for those blind-spot cameras, she still checks over her shoulders, but appreciates the added layer of awareness they provide.

The one pain point for her is fuel economy, but that’s to be expected for the class. She used to be able to go several weeks at a time without filling up the GLK with diesel. The tradeoff is we can all fit in the one car more often, which saves fuel on those regional road trips. And we can bring stuff with us. And everyone’s comfortable. When there’s a viable and affordable electrified vehicle in the class, we’ll reassess. For now, we’re all still happy about the purchase. 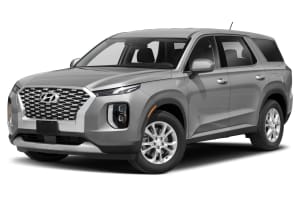