Everything we came to expect from the last Civic (exceptional acceleration and fuel economy, well-balanced driving manners, spacious interior, above-average build quality) has been elevated with cleaner and classier looks, improved tech and the overall increase in refinement. A class leader.

Throughout its 11 generations, the Honda Civic has generally followed a pattern of a revolutionary redesign followed six years later by a more cautious evolutionary approach. As the all-new, 11th generation model, the 2022 Honda Civic falls into the evolution category. The engine choices and interior dimensions are basically identical, the driving experience isn't terribly different, and the overall shape is similar. It's also every bit the class leader its predecessor was upon its introduction six years ago.

So what's new? Though the Civic sedan's general shape, including that fastback roofline, is maintained, the old car's bulbous fenders, exaggerated lines and extraneous vents have been replaced with a cleaner, simplified look bound to age better over time. It also looks more expensive than it is. Most of that goes for the also-new 2022 Civic Hatchback. The interior is similarly more premium in appearance, if not plastics quality, with a striking new design that manages to simultaneously declutter the cabin and improve the infotainment system with extra physical buttons. And how about those cool retro-inspired air vents?

Basically, the Civic looks better inside and out, remains a terrific compact sedan to drive, and its surprisingly spacious cabin and trunk provide impressive practicality. Its value proposition is also maintained with generous feature content, competitive pricing, excellent fuel economy and Honda's longstanding reputation for reliability and resale value. While the Mazda 3, Hyundai Elantra and Nissan Sentra are definitely worthy of consideration, this new Civic sure makes it hard to go in a different direction.

Besides the changes highlighted above, the completely redesigned Civic will only be available as a sedan and a hatchback similar in concept to the previous generation. The coupe is no more. The high-performance Civic Si will be a late-availability addition to the '22 lineup, while the Civic Type R is on hiatus while Honda readies a version based on the new generation. 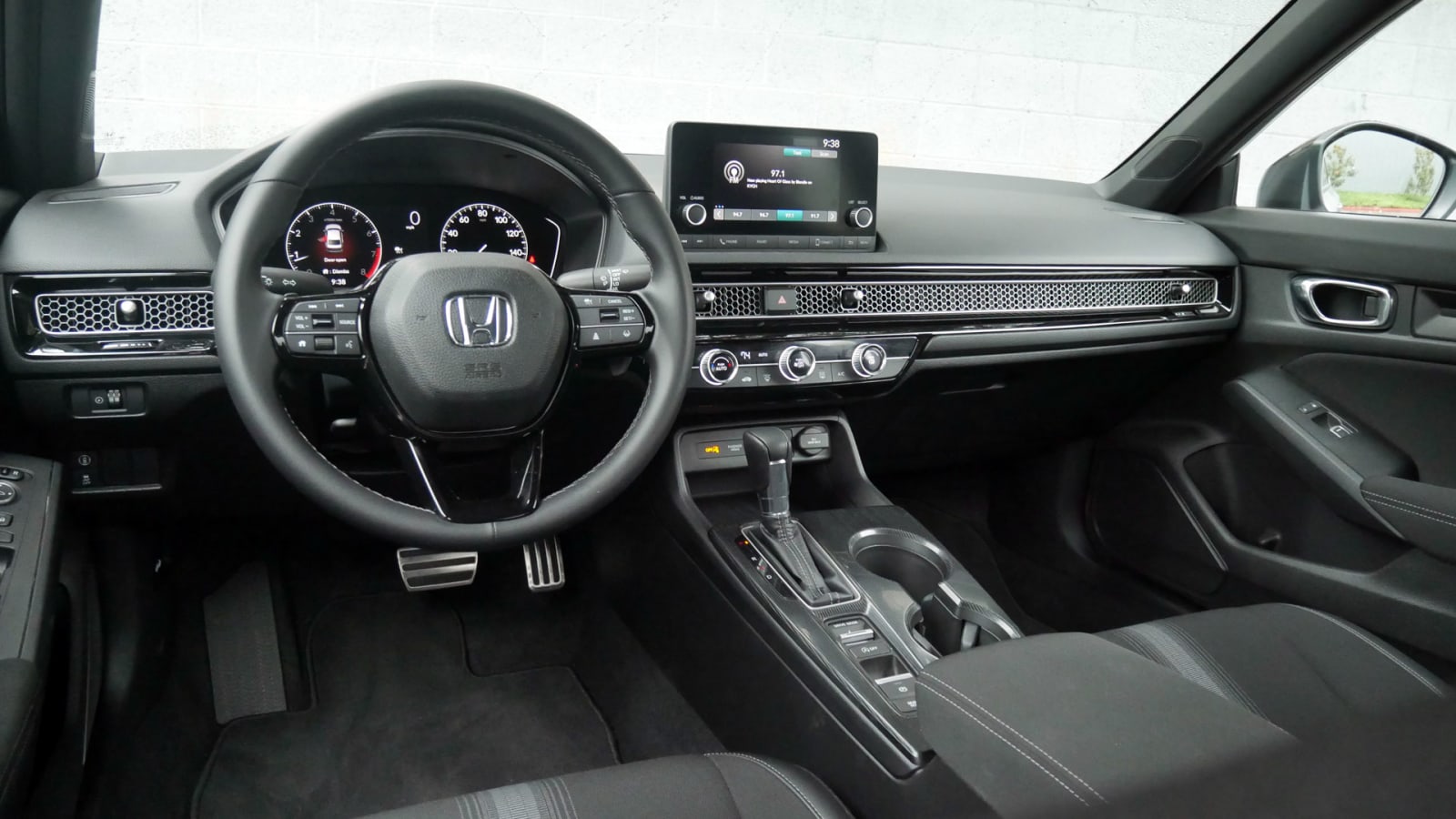 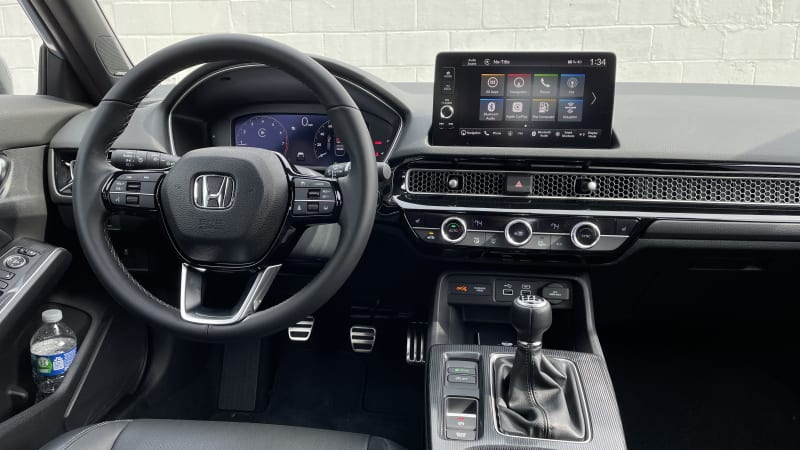 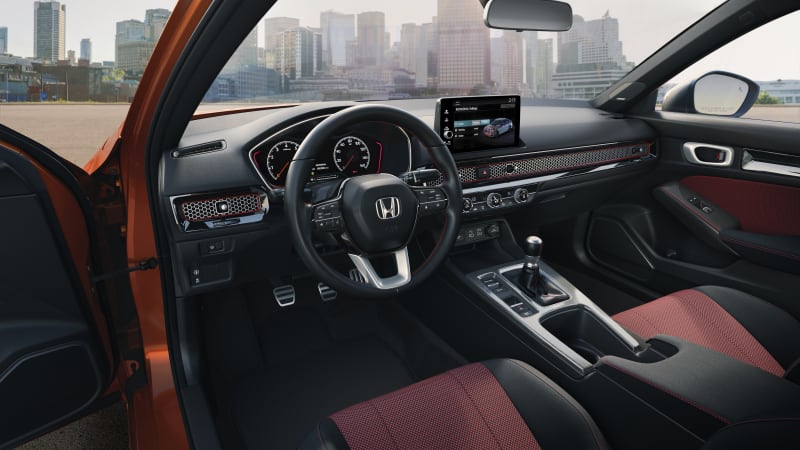 In a segment filled with surprisingly impressive interiors, the 2022 Civic interior delivers even in the lower Sport trim level with cloth seats and the base infotainment system (pictured in the large picture above). This is still an economy car, so there's plenty of hard plastic about (center console, door sills), but what you see and touch most come together in a tasteful, modern design that looks (and feels) like it belongs in a much pricier car. There's more than a whiff of Audi right down to the way the buttons and knobs click satisfyingly. We also have to call out the dash-width air vents, with their honeycomb openings, metal-like finish and clever knob controllers (they're outlined in red in the Civic Si). They're so great Audi probably wishes it had come up with them first.

Perhaps most importantly, however, the Civic is no longer held back by its infotainment system. There's a new 7-inch base touchscreen (below left) and the Touring gets the 9-inch unit found in Accord (below right), but both represent improvements over the last-generation system with quicker responses, a more sensible menu structure and no glitches during our time with it. Apple CarPlay and Android Auto are standard (wireless in the Touring), and with CarPlay at least, we like that Honda doesn't lock out touchscreen controls for the Music app (a common annoyance).

Other changes include a more conventional center console design (the old multi-level bin with its sliding cupholders and tray was perhaps too clever for its own good) and new digital instrument panels. The LX, Sport and EX have a combination of analog speedometer and 7-inch multi-purpose display, but it all appears to blend together into one unit. It's traditional in design, yet modern in functionality. The Touring gets a completely digital, 10.2-inch instrument panel that's similar in basic appearance but provides greater functionality and flashier graphics. 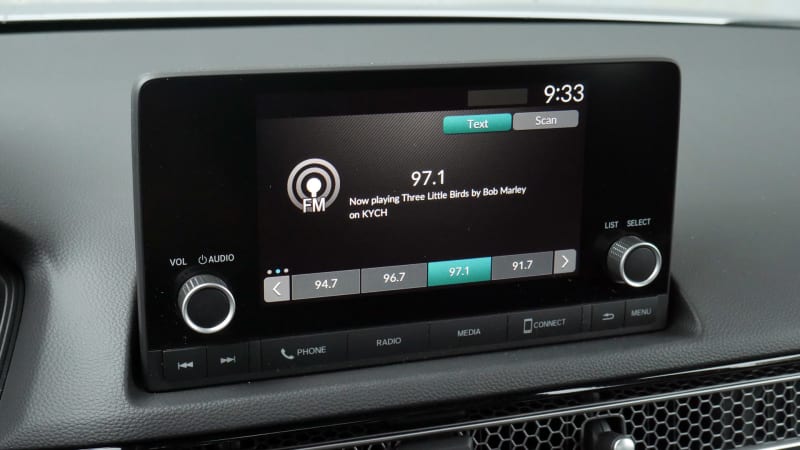 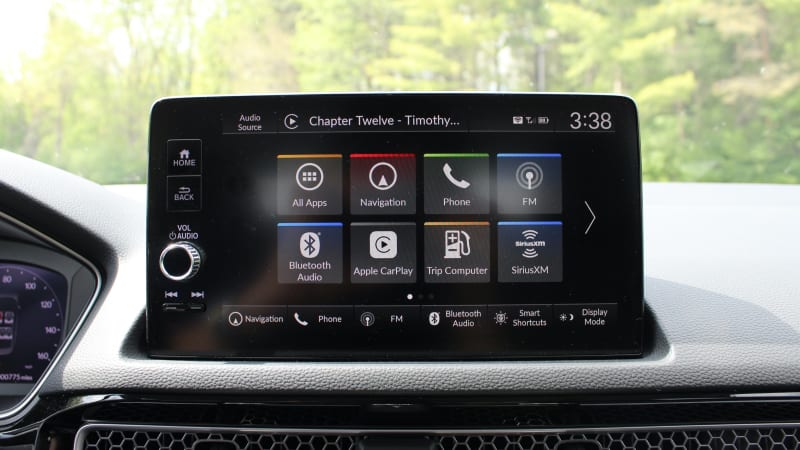 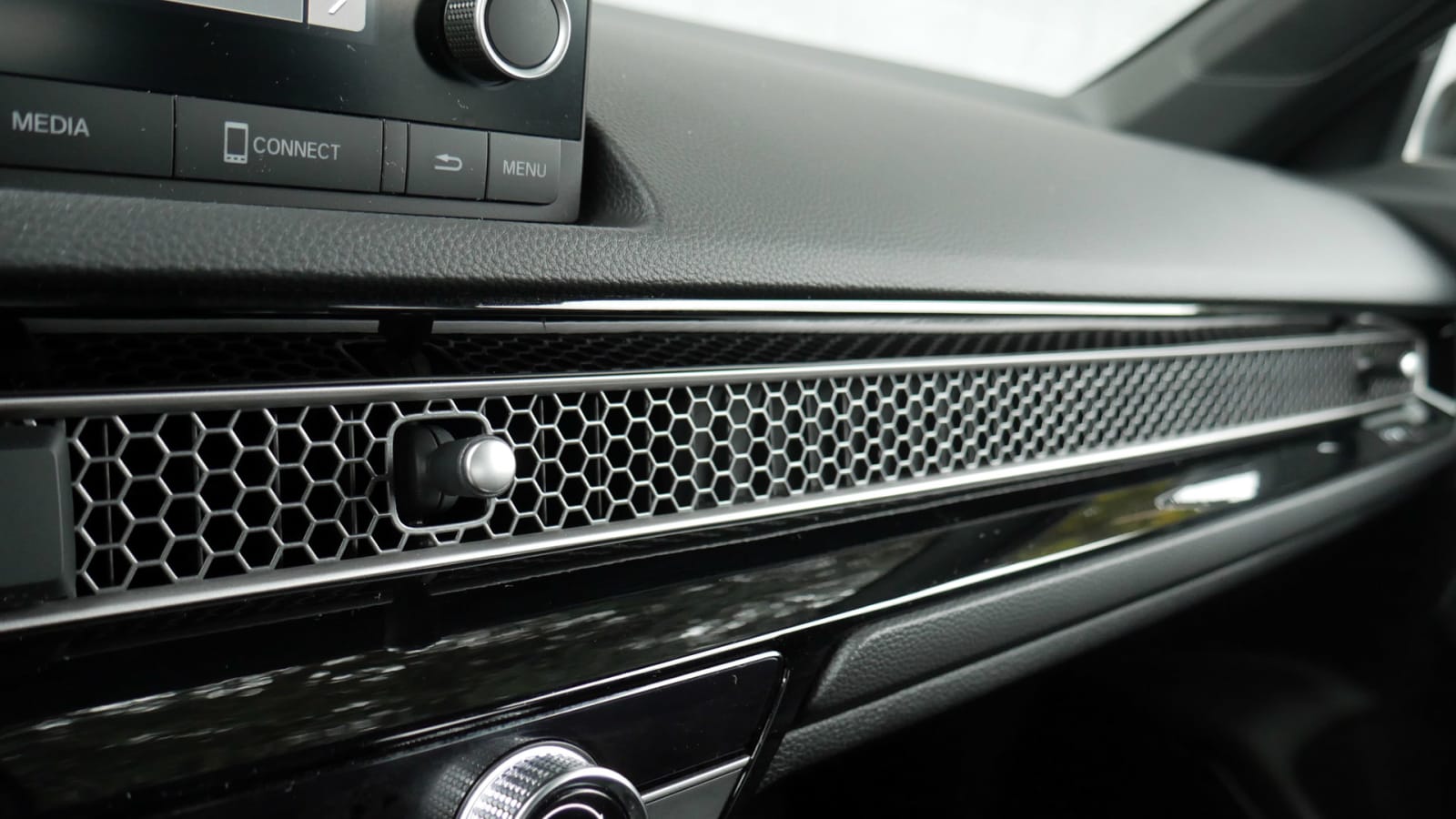 The new Civic is technically bigger than the last version on the outside, but not enough to really matter. Interior dimensions are identical. Its 37.4 inches of rear legroom is bettered only by the Hyundai Elantra, and is about 2 inches more than most competitors. For a compact car, it's definitely not compact back there. A 6-foot-3 driver with the seat pushed all the way back still found enough space in the back seat to sit comfortably "behind himself." There was also just enough headroom, though that may not be the case in the EX or Sport with their standard sunroof.

There's also nothing compact about the sedan's trunk. On paper, it has 14.8 cubic-feet of volume (14.4 in the Touring). That may be 0.3 less than the old trunk, but it still betters its competitors. In practice, we found it had enough space to fit all six suitcases of our luggage test with some room left over. Basically, don't be so sure you need to step up to Accord for family duty.

As for the Civic Hatchback, it's 4.9 inches shorter in overall length, but that's entirely the result of having less rear overhang. We haven't performed a luggage test on this body style, but we suspect it won't be able to quite so easily swallow all those bags even if it gains additional height and therefore large-item utility thanks to its height. Also, as before, the Hatchback's cargo area is more like a notchback sedan (think an Audi A7) than a traditional VW Golf-like hatchback. 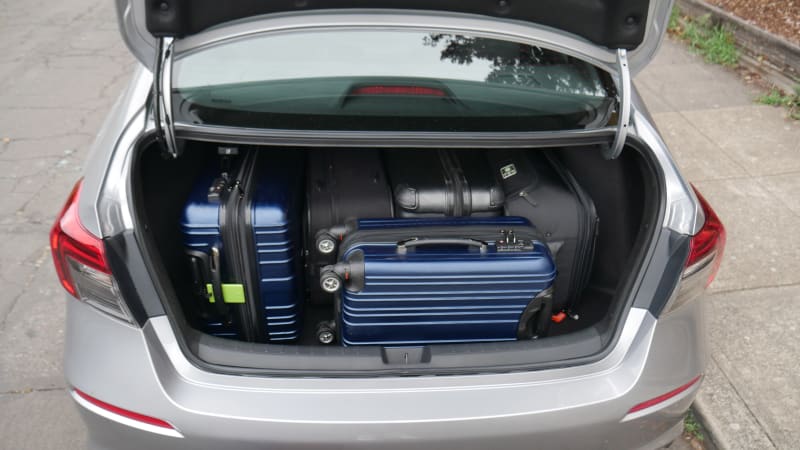 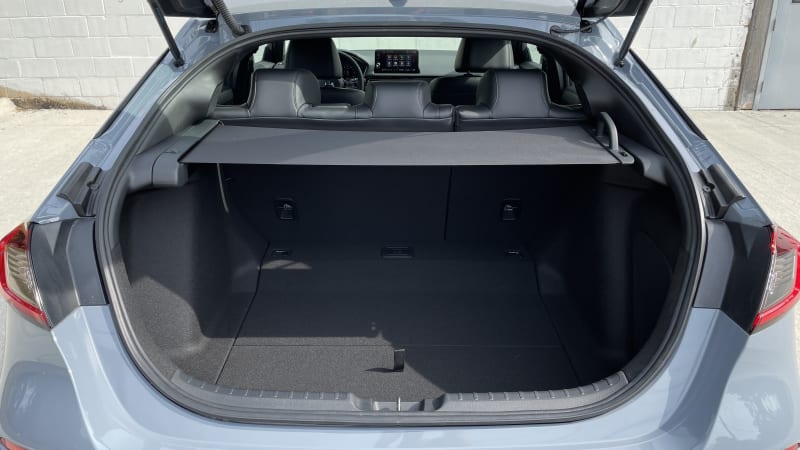 What are the Civic fuel economy and performance specs?

The 2022 Honda Civic LX and Sport are powered by a 2.0-liter inline-four that produces 158 horsepower and 138 pound-feet of torque, which is a typical amount for the segment. Front-wheel drive and a continuously variable transmission (CVT) are standard on every Civic sedan, but the Hatchback Sport gets the option of a six-speed manual. Fuel economy is 31 miles per gallon city, 40 mpg highway and 35 mpg combined for the LX. The Sport is lower, likely due to it bigger wheels, but still excellent at 30/37/33. Hatchback fuel economy was not available at the time of this writing.

A 1.5-liter turbocharged inline-four good for 180 hp and 177 lb-ft is standard on the Civic Sedan EX and Touring, and the Civic Hatchback EX-L and Sport Touring. A CVT is standard on every trim level, but the Sport Touring offers the six-speed manual as an option. Besides its considerably stronger acceleration, this engine also gets better fuel economy. EPA estimates for the sedan are 33/42/36 for the EX and 31/38/34 for the Touring.

The 2022 Honda Civic Si also has a 1.5-liter turbocharged inline-four, but features a much different power band. The resulting output is 200 horsepower and 192 pound-feet of torque. As always, the Civic Si is front-wheel drive and a six-speed manual transmission is mandatory. 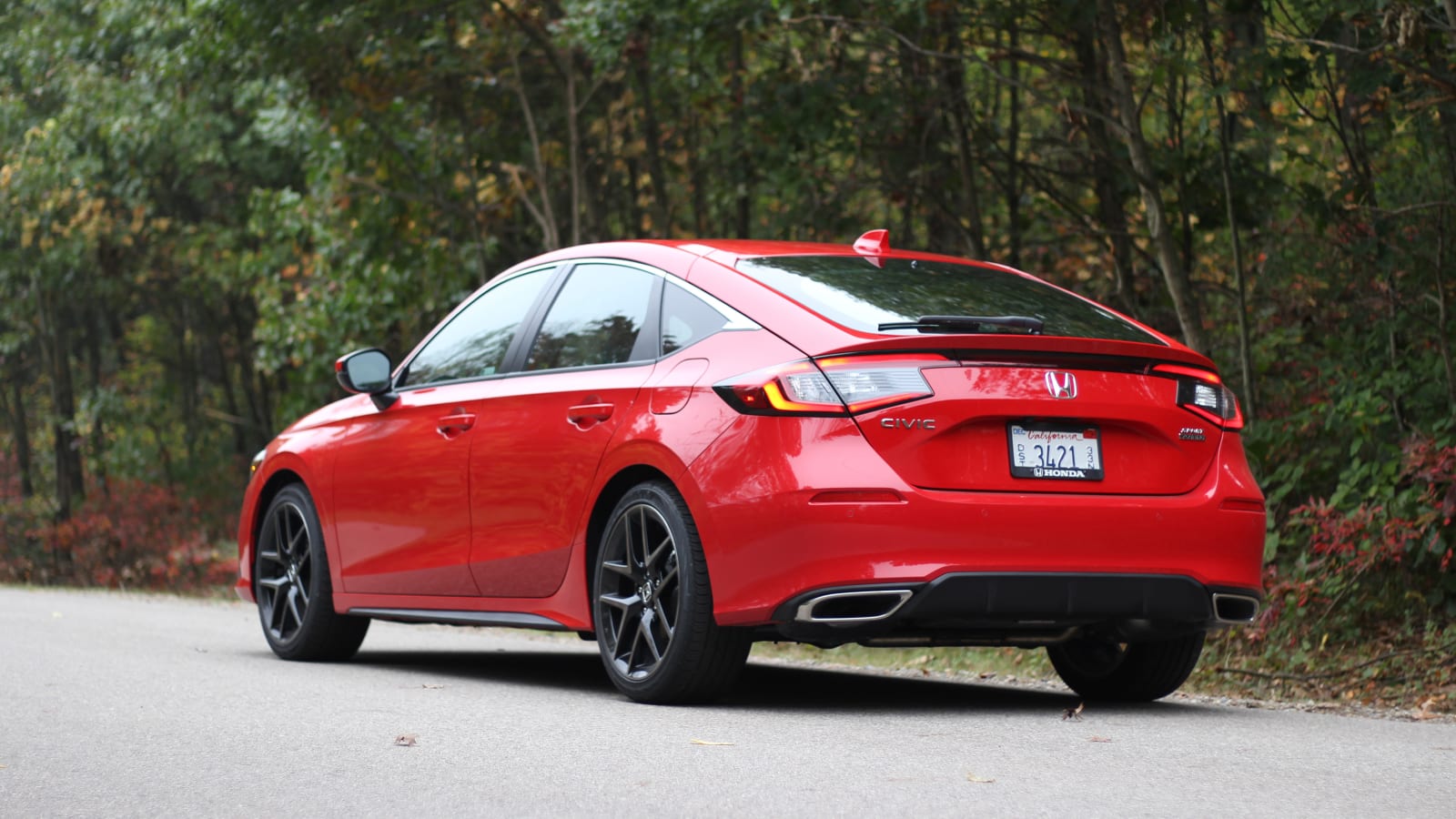 Through its 11 generations, the Honda Civic has always been at its best and most competitive when it was responsive and even fun to drive. That was certainly the case with the last Civic, which rose to new heights thanks to added refinement and the low-end torque provided by the available turbo engine. The 2022 Civic picks up the torch and builds on that progress. It's indeed fun to drive, with a lightweight and agile feel that encourages you to seek out winding roads. The steering is precise and consistently weighted, imparting a sense of connection to the driver. Throttle response is also as you'd expect from a driver-focused car, though selecting Sport mode in the Sport or Touring trims really wakes things up with old-school, hair-trigger reactions that any driving enthusiast should appreciate.

The turbo engine remains the one to get given its greater torque, strong acceleration and superior fuel economy. That said, the naturally aspirated base engine is certainly acceptable – it has comparable power to its competitors, but it's smoother and sounds better. It is a Honda after all. We wish either engine could be paired to a manual, but at least the mandatory CVT makes up for some slightly blender-like noises by limiting the yo-yoing between high and low revs associated with this increasingly common transmission. It also simulates gear changes like other CVTs, but does so in a more natural way than what you'll find in a Subaru, for example. Now, if you don't like the idea of a CVT at all, the Hatchback alone offers a sweet six-speed manual with either engine. The gearbox is flickable, but weighty. Notchy, but not burdensome. A technical treat, but oh-so-fun to play with. Seriously, the shifter feel in this approximately $30,000 Honda puts to shame those in much more expensive sports cars.

What other Honda Civic reviews can I read?

Our first turn behind the wheel of the new Civic, including more in-depth information about its changes, engineering and design. We also drove the range-topping Touring trim. 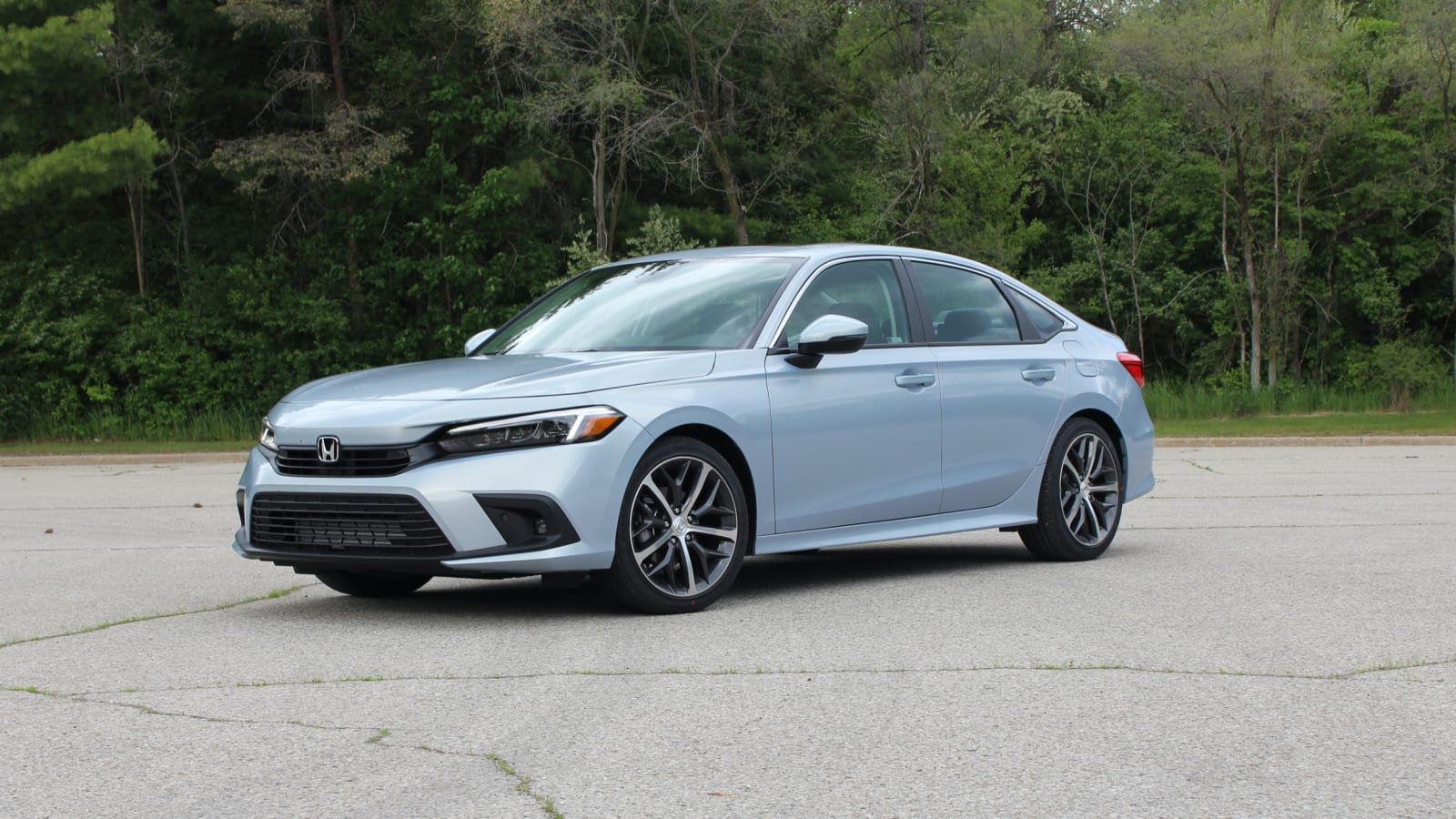 Get an in-depth look at what's different about the Civic Hatchback, including its cargo capacity and the six-speed manual transmission that isn't available on the Civic sedan. 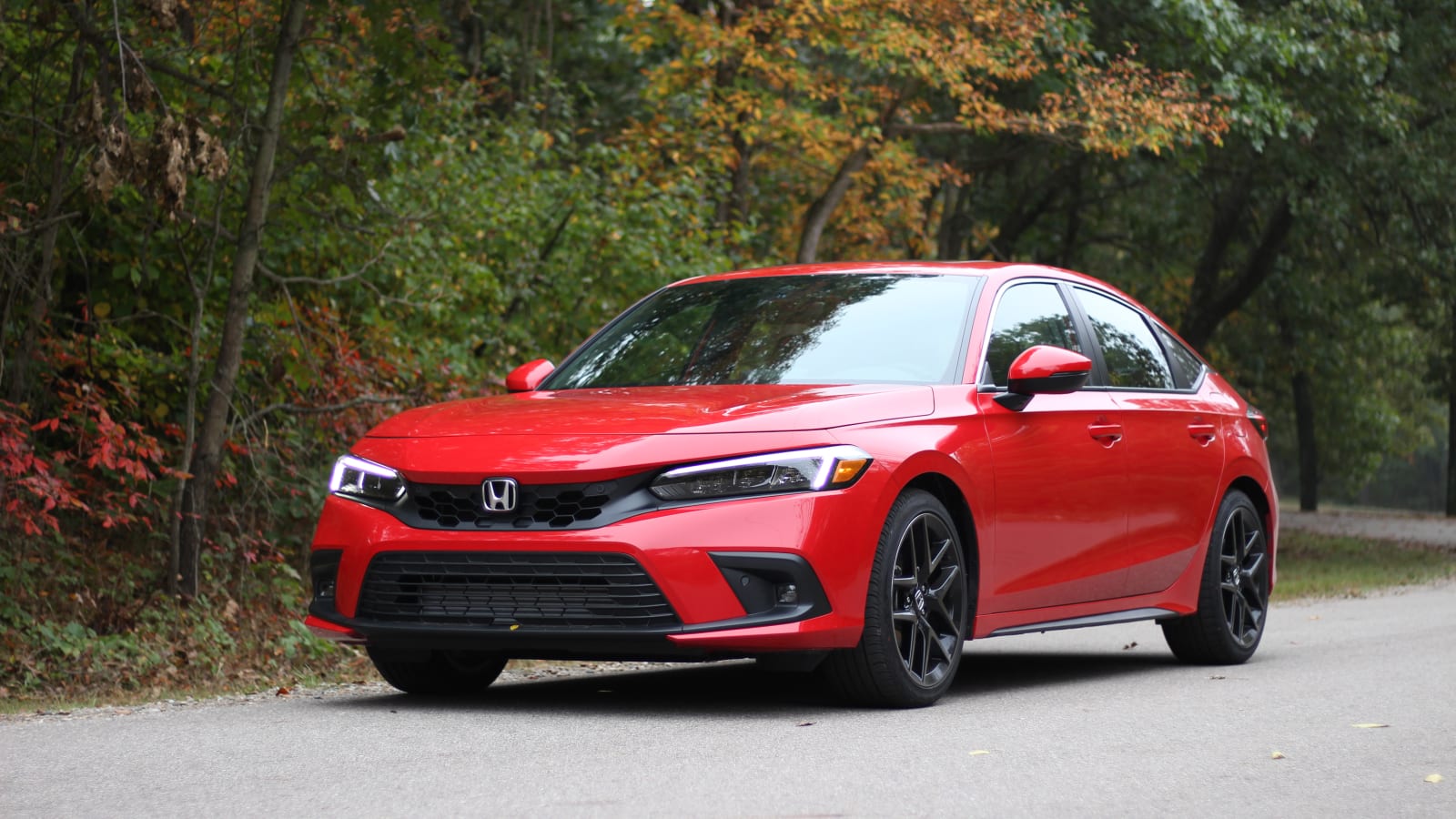 We haven't driven the new Civic Si, but we have seen it in person. You can find everything we know about it here. 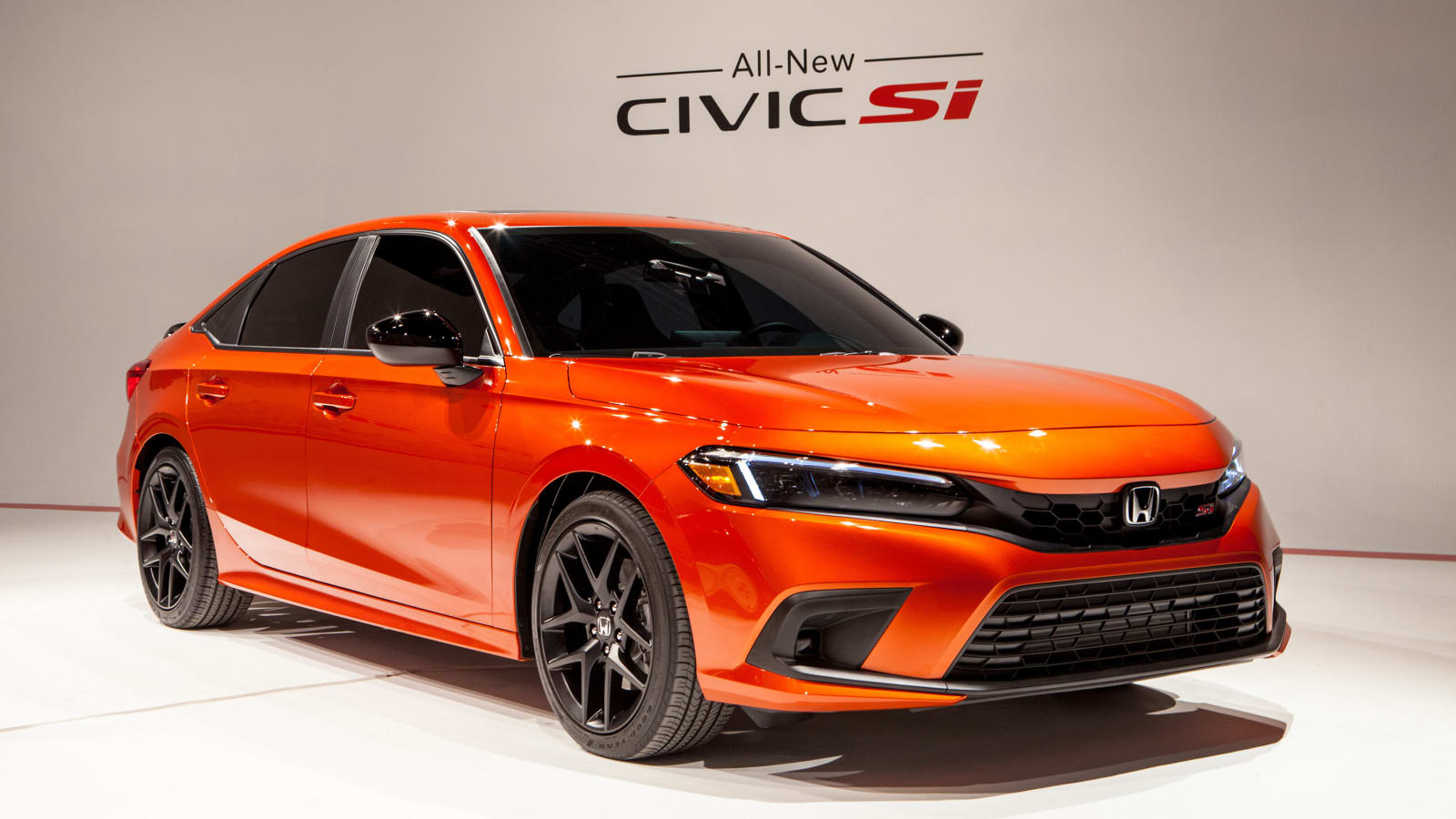 The new Civic nearly has the trunk space of a midsize sedan. We put it to the test with all the luggage from our garage. 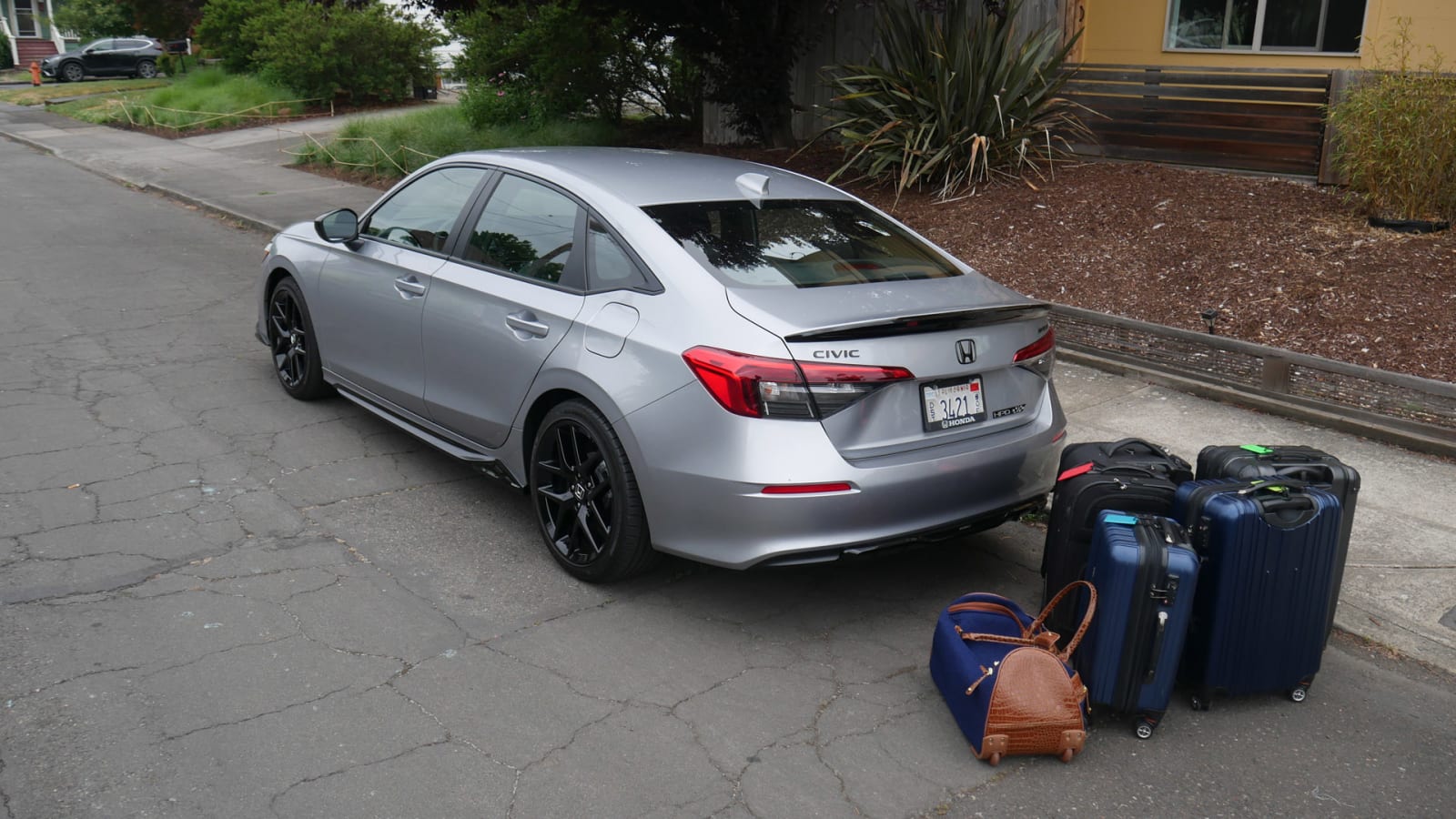 How much is the 2022 Civic price and what features are available?

Pricing for the 2022 Honda Civic can be found below broken down into the available trim levels of both the Sedan and Hatchback. All include the $995 destination charge.

Note there is no price difference between the Hatchback's available transmissions.

We would skip the base LX and start your search with the Sport. Although their basic equipment is broadly similar (and generous), the Sport has some key niceties that seem well worth the modest price increase: alloy wheels, leather-wrapped wheel, proximity entry and push-button start, and an eight-speaker sound system. You should also look at the EX in regards to the sedan: though it doesn't look as sporty and doesn't come with different drive modes, it does include the highly desirable turbocharged engine (plus blind-spot warning, heated front seats, dual-zone climate control, and a sunroof) for a still-reasonable premium. The turbo engine shows up on the Hatchback EX-L. 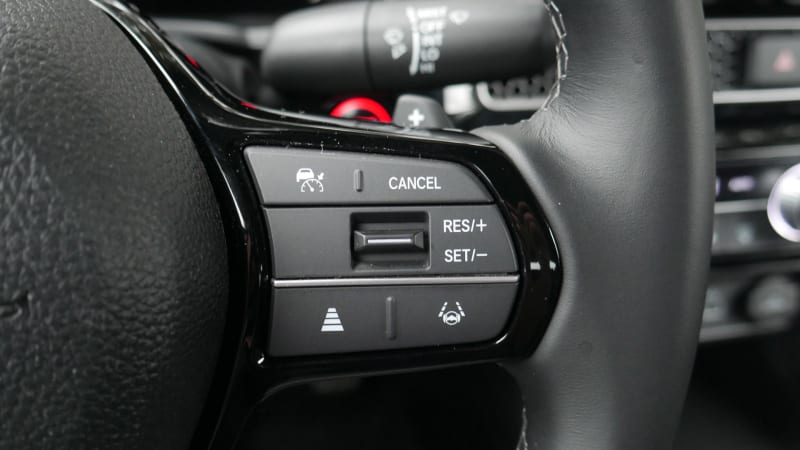 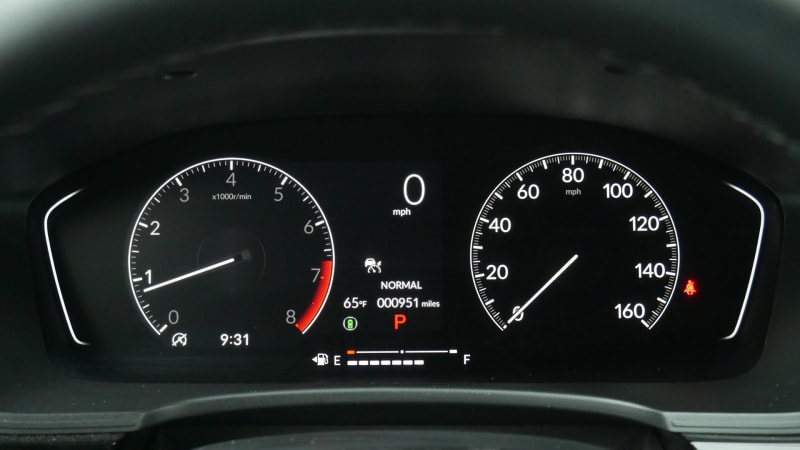 What are the Civic safety ratings and driver assistance features?

The Insurance Institute for Highway Safety named the 2022 Civic Sedan and Hatchback a Top Safety Pick+ and received the best-possible performance in every single category, which is a rare feat. The government hasn't crash tested it.

Driver assistance features are not only abundant, but their performance have been greatly improved for 2022, especially the adaptive cruise control system and its lane-centering capability. The Civic can also now be equipped with a traditional blind-spot warning system (warning lights in the mirror) instead of the old LaneWatch blind-spot camera that was as much of an annoyance as an aid. Every Civic now comes standard with forward collision warning, automatic emergency braking, lane-keeping assist, and adaptive cruise control with steering assistance and stop-and-go capability. Blind-spot warning shows up on the EX and Touring.