And then there's the matter of the Honda Ridgeline

It's not often that you see a car segment kicked off with one new model, let alone two. But that's what we have with the 2022 Ford Maverick and 2022 Hyundai Santa Cruz: the start of the truly compact pickup truck segment. The two trucks are hitting the market this year, and they're shockingly close in shape, size and philosophy. So obviously we had to compile the numbers and see how they compare.

Since neither truck is on sale just yet, there are some small holes in the data that won't be filled until later. And we haven't driven either vehicle, so this is just a look at the numbers. Still, we should be able to learn some things with this preliminary data. We've also excluded the Honda Ridgeline, since although it shares some design ideas, it's significantly larger. That being said, we talk more about it at the end of this post. Now, on to the numbers. 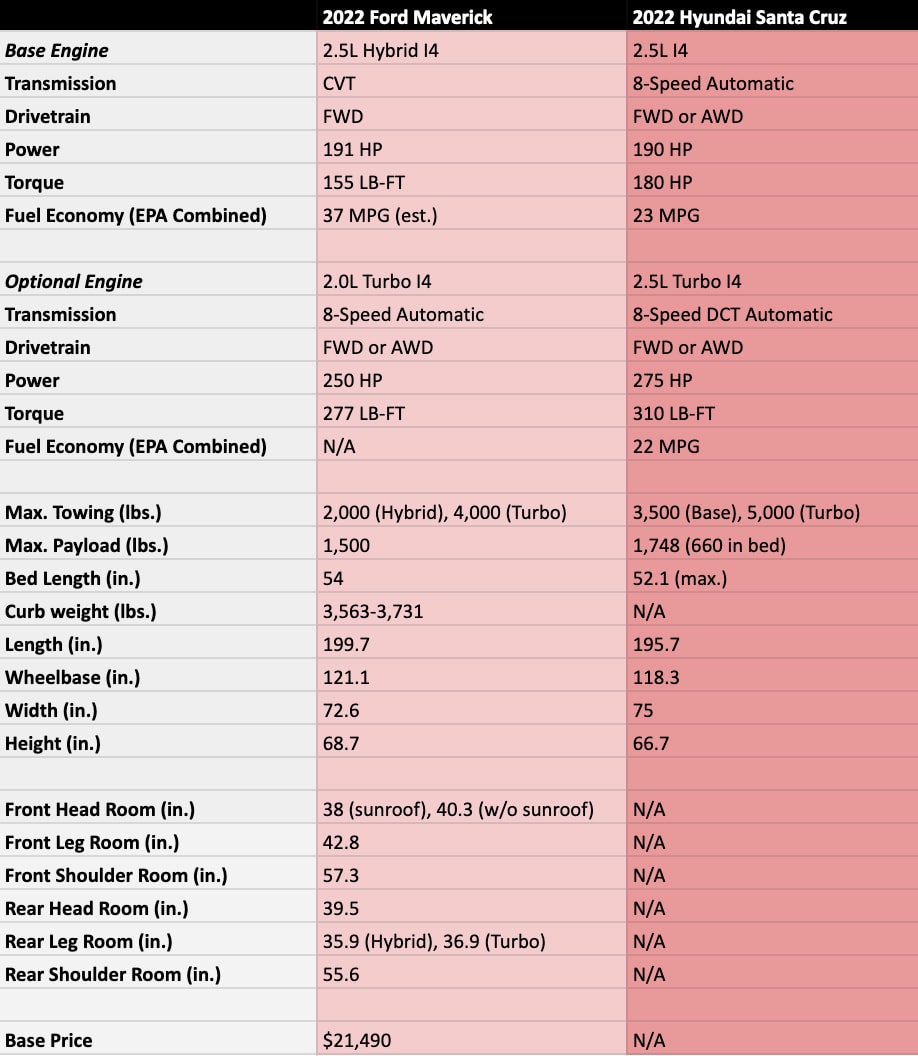 Both trucks utilize four-cylinder engines and front-wheel-drive-based layouts, but there are major differences with the base powertrains. The Maverick is the only one with a hybrid powertrain available, and it's actually the base engine. It's a 2.5-liter naturally aspirated engine paired with an electric motor and CVT. Combined output is 191 horsepower and 155 pound-feet of torque, and it returns an estimated 37 mpg combined, making it unquestionably the most efficient choice.

The Santa Cruz on the other hand has a non-hybrid, naturally aspirated 2.5-liter engine, and it's coupled to a traditional eight-speed automatic. Power is nearly dead even with the Ford at 190 horsepower, but the Hyundai makes more torque with 180 pound-feet. Fuel economy is a bit disappointing at 23 mpg combined. Helping make up for the low fuel economy is the available all-wheel drive, something that's not even an option with the hybrid Maverick.

Each of these trucks also has turbocharged four-cylinder engines as options, both with standard front-wheel drive and optional all-wheel drive. The Maverick has a 2.0-liter unit making 250 horsepower and 277 pound-feet of torque. The Santa Cruz's bigger 2.5-liter engine delivers 275 horsepower and 310 pound-feet of torque. Each has an eight-speed automatic transmission, but the Ford has a more traditional torque converter automatic while the Hyundai has a dual-clutch model. The Hyundai gets 22 mpg combined, which is barely worse than the base model. Ford hasn't announced the fuel economy for the turbo Maverick yet.

Of course the reason people buy trucks is to haul stuff, and these trucks are closely matched in this area, too. The Maverick has a 4.5-foot bed that's your typical boxy shape. That's a bit larger than the Santa Cruz's bed, which because of its oddly shaped forward wall, is between 4 and 4.3 feet long. The Santa Cruz does feature a trunk below the bed floor that adds back some cargo space to the short bed. The Santa Cruz also boasts a bigger payload capacity of 1,748 pounds to the Maverick's 1,500. With that being said, the Santa Cruz can only have 660 of those pounds in the bed. Ford hasn't said whether such a restriction applies to the Maverick. 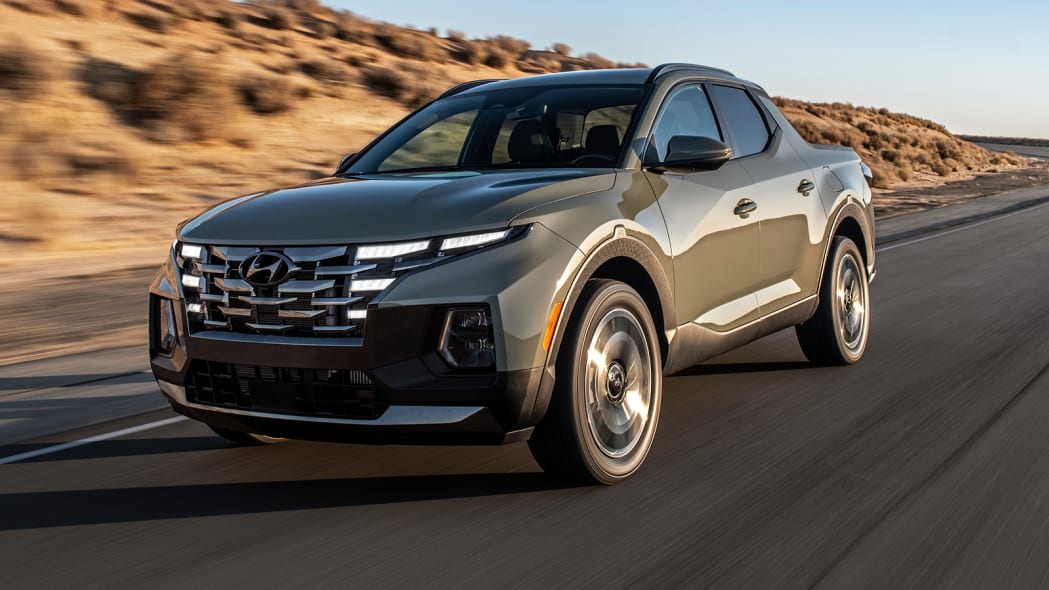 While cargo carrying is the reason to buy a pickup, small size is a big part of why you would want one of these trucks. And of the two, the Santa Cruz is a bit smaller overall. Lengthwise its 4 inches shorter with a nearly 3-inch shorter wheelbase. It sits 2 inches lower, too. But it is wider than the Maverick by about 2.5 inches. Neither truck is particularly large, though, with each being at least 10 inches shorter in length than the smallest body-on-frame midsize pickups.

Unfortunately, we don't have interior or curb weight specs for the Santa Cruz. As for the Maverick, passenger space seems generally similar to the midsize crew cab trucks. And depending on how those midsize trucks are equipped, the Maverick can be between 500 and 1,000 pounds lighter than them.

This is the biggest hole in the data. Only Ford has provided pricing, but only for the base Maverick. It comes in at $19,995 before destination charge, so its final price will be $21,490 including the $1,495 destination charge. As for the Santa Cruz, we know it's based on the Tucson, which starts at about $26,000. As such, we wouldn't be surprised if the Santa Cruz is priced similarly. 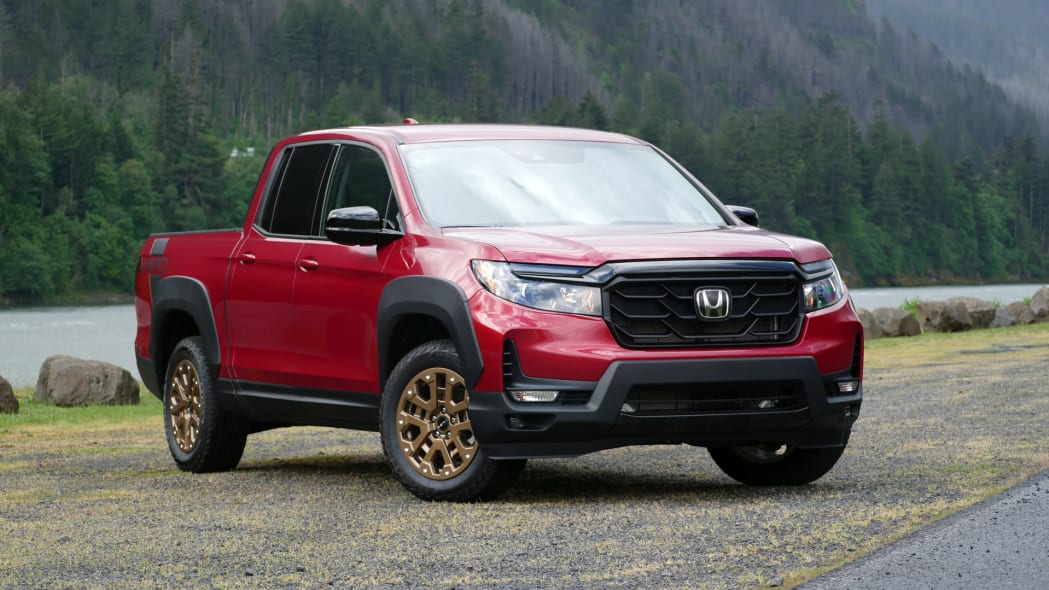 And what about the Honda Ridgeline?

We excluded the Ridgeline from the main chart because it's significantly larger, more expensive, and more powerful in standard trim. It's sized more like midsize trucks at about 10 inches longer than the Maverick. Most of that length is manifested in the longer 5.3-foot bed. The bed also includes an in-floor trunk like the Santa Cruz. Payload is between 1,500 and 1,600 pounds, and towing capacity is 5,000 pounds. The only engine is a 3.5-liter V6 making 280 horsepower and 262 pound-feet of torque. It also gets 21 mpg combined, not much worse than the Santa Cruz. Front-wheel drive is standard, and all-wheel drive is an option. Base price is around $37,000. So it's bigger and can carry more in some cases, but it's also quite a bit more expensive.