Drive like Mario Andretti in his 1981 Alfa Romeo GTV-6

You may not drive as well as Mario Andretti, but you can drive his car In the United States, Mario Andretti is the racing driver whose name is likely best known among the general public. Over his decades-long career, Andretti has driven into the winner's circle numerous times and in a variety of racing series and venues. He is an ex-Formula One champion (1978), a four-time IndyCar champion, as well as an Indy 500 winner (1969). And while we mere mortals probably cannot drive like Mario Andretti, we can drive one of Mario Andretti's cars, specifically this 1981 Alfa Romeo GTV-6, which is currently for sale at classic-car vendor LBI Limited.

Based on the pictures of this Alfa, the car shows just under 36,000 miles. This GTV-6 is finished in Grigio over a tan leather interior. Power is by a 2.5-liter DOHC V6. Equipment includes a five-speed manual, power windows, air conditioning, a wood-rim steering wheel and a Blaupunkt cassette stereo.

Andretti drove for the Alfa Romeo F1 team in 1981, and he also appeared in ads for the GTV-6. There was even a Mario Andretti limited edition of the earlier European-market Alfa Romeo GTV in 1976. This car reportedly was a gift from the automaker and was delivered in May 1981. He reportedly kept it for a year, although his ownership is documented (click the "View Documents" tab on the listing). 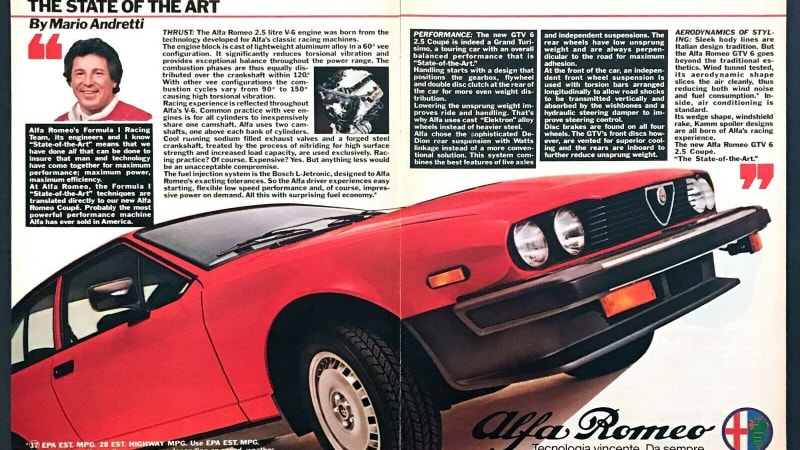 The current asking price for this Alfa is $48,000, although there may be some wiggle room there, given that this car appears to have been a no-sale in a May 2020 RM Sotheby's auction where it garnered a high bid of $28,000. That's about $8K more than is sold for at auction in 2016, although the car is said to have since had thousands of dollars in service. Regardless of the price, this is a cool Alfa with a direct connection to America's most famous racing driver.