It illustrates Maserati's approach to electrification Maserati is keeping its promise of adding more electrified options to its lineup. Shortly after electrifying the Ghibli, it stuffed the turbo-electric powertrain in the Levante to create its second series-produced hybrid model.

Presented at the 2021 Shanghai auto show, the Levante Hybrid is powered by a turbocharged, 2.0-liter four-cylinder engine that works with a 48-volt mild-hybrid system. The system's total output checks in at 330 horsepower and 332 pound-feet of torque, figures on par with the Ghibli Hybrid's, and it spins the four wheels via an eight-speed automatic transmission and a limited-slip rear differential. Maserati quotes a six-second sprint from zero to 60 mph, a number that puts the Hybrid about on par with the base model, and a top speed of over 150 mph.

While the Levante's hybrid technology does not unlock electric-only driving range, it's much lighter than a comparable plug-in hybrid system, which would require a bigger and heavier battery pack. In turn, this solution gives the Hybrid better weight distribution than the V6-powered model. It's more agile to drive, according to Maserati.

It takes a well-trained eye to tell the Levante Hybrid apart from the non-electrified model. Car-spotters should look for light blue accents on the fender-mounted air vents, on the brake calipers, and on the C-pillar emblems. Inside, the same shade of blue is found in the stitching that's on the seats, on the door panels, and on the dashboard.

Maserati told Autoblog that, like the Ghibli Hybrid, the Levante Hybrid will not be sold in the United States. Sales in several overseas markets will start before the end of 2021, though pricing and availability haven't been announced yet. While we're not getting Maserati's first electrified SUV, it gives us a valuable look at how the Italian company plans to spread electrification across its range without completely neutering the DNA that characterizes it. That's significant insight, because one of the next electrified Maserati models will be a version of the MC12 supercar. 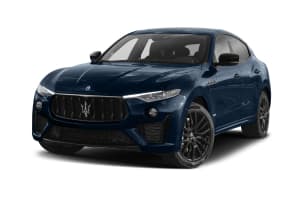