Mitsubishi went from also-ran status to legitimate contender with the latest Outlander. It's a legitimately good value for buyers who may occasionally need a third row, but two-row options like the Honda CR-V and Toyota RAV4 are tough competitors.

It only takes a minute behind the wheel of the 2022 Outlander to understand how Mitsubishi’s alliance with Nissan and Renault has allowed it to reap dramatic rewards. The 2022 Mitsubishi Outlander isn’t just redesigned, it’s a thorough rethink on how to attack the compact crossover marketplace. Not only that, it’s vaulted Mitsubishi from an also-ran to a solid contender for your hard-earned bucks.

The Mitsubishi Outlander is not a rebadged Nissan Rogue. The two crossovers share their platform and powertrain, and Mitsubishi says they were co-developed and Outlander was not simply a hand-me-down. They differ in many notable ways, not the least of which is a standard third row (sized for very limited use) in the Outlander that’s not offered in the Rogue, but also in tuning, design and materials.

The new Outlander certainly stands out with a front view that’s dominated by Mitsubishi’s "Dynamic Shield" fascia. Two curved chrome swoops work as outward-facing brackets to a grille with horizontal slats above a patterned opening. Lighting clusters are split into two parts, with LED driving lights and turn signals on top, and vertically stacked headlights below. Unlike some other “bold” faces currently seen in the industry, Mitsubishi’s design divides opinions but somehow looks better and more interesting in person than on screen.

Mitsubishi managed an iteration of the floating-roof trend that looks different than anything else. There’s an unusually flat roof in profile that ends in a brim-shaped rear spoiler atop a pillar at the very back of the car that’s shaped like a jet fin. Deep cutlines create a strong shoulder with a parallelogram indentation below the knee. All but base-model Outlanders are fitted with 20-inch wheels that are highlighted above with stamped-in brows. It all adds up to an imposing design that looks larger than it is. 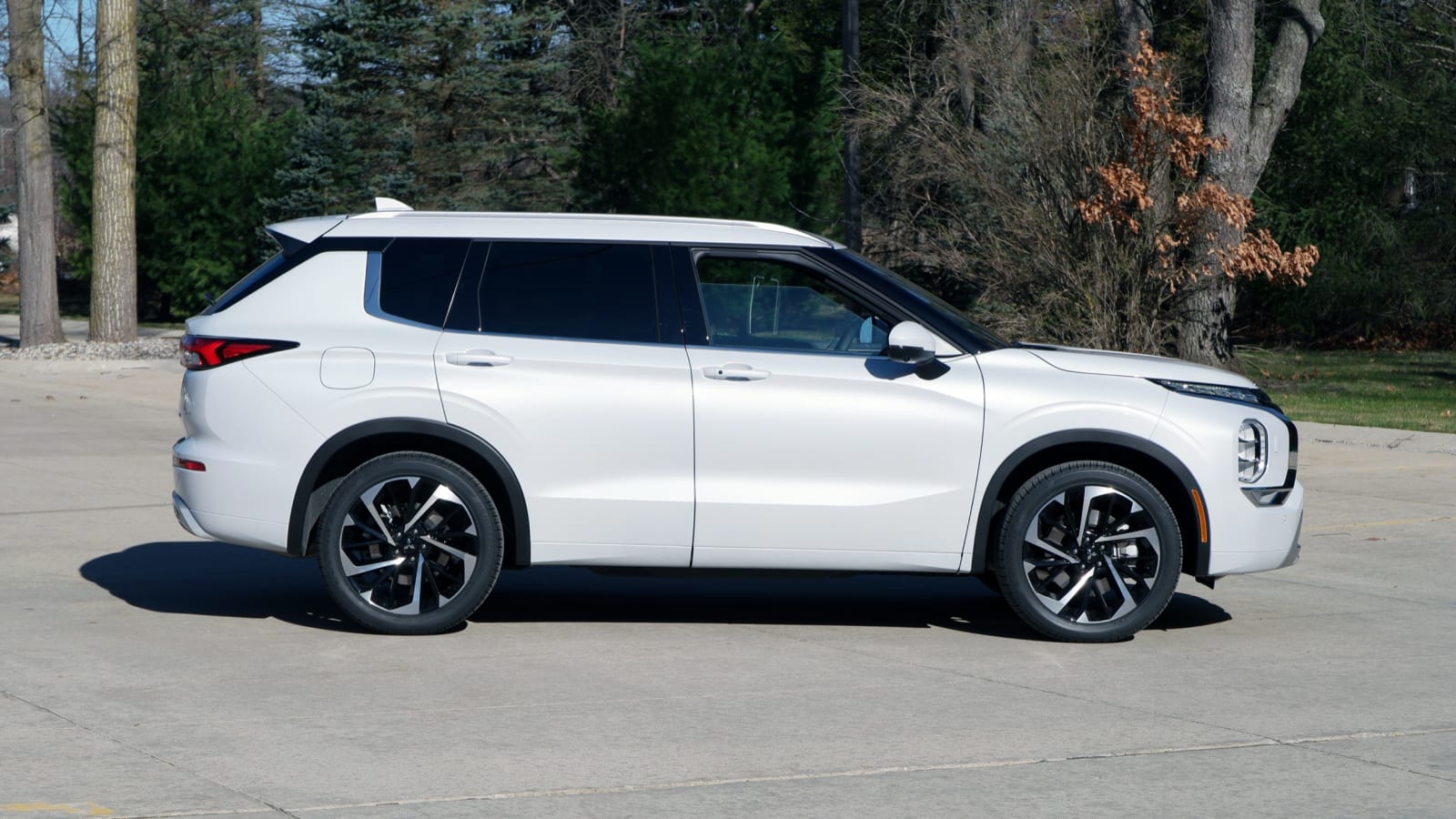 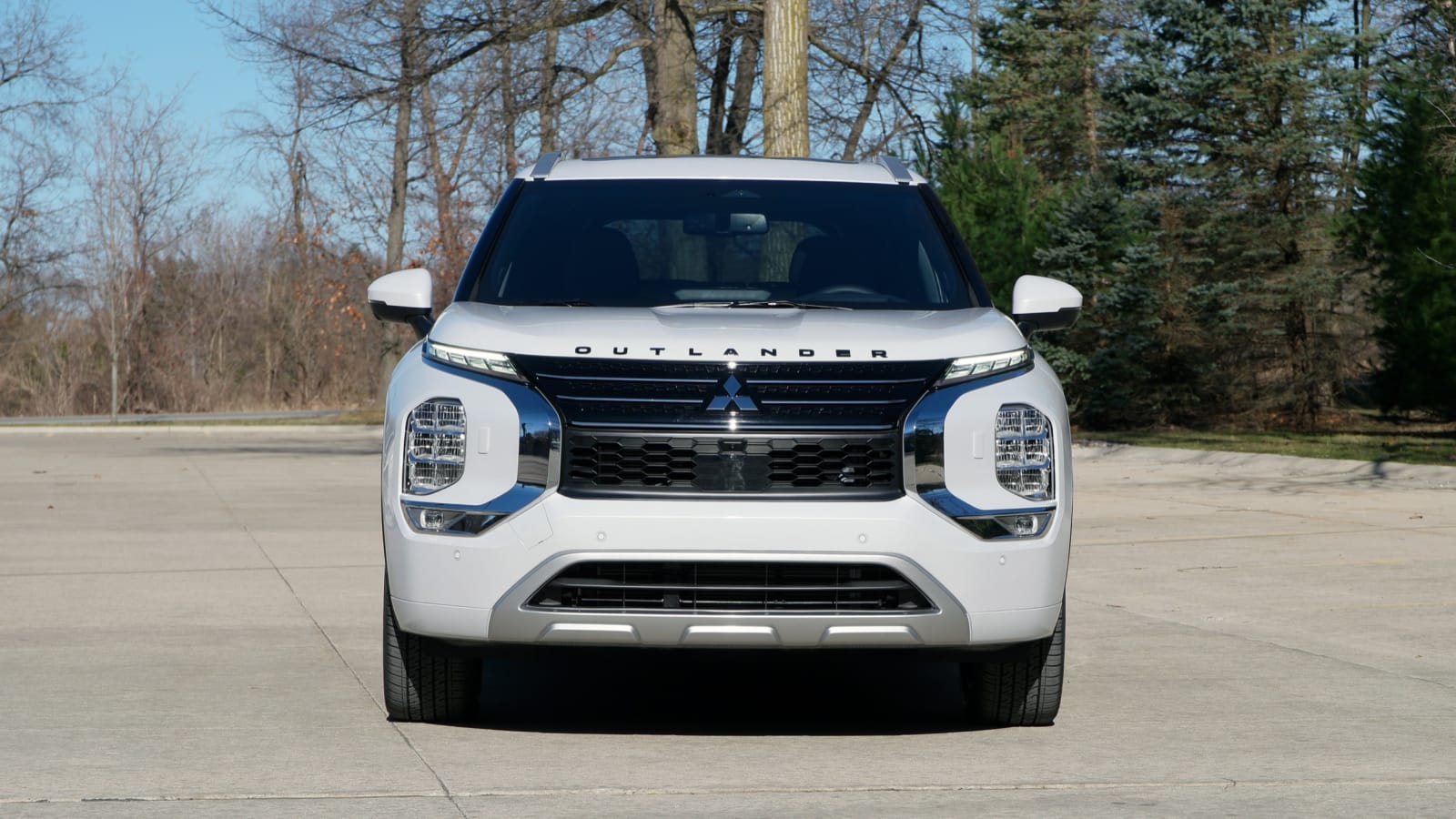 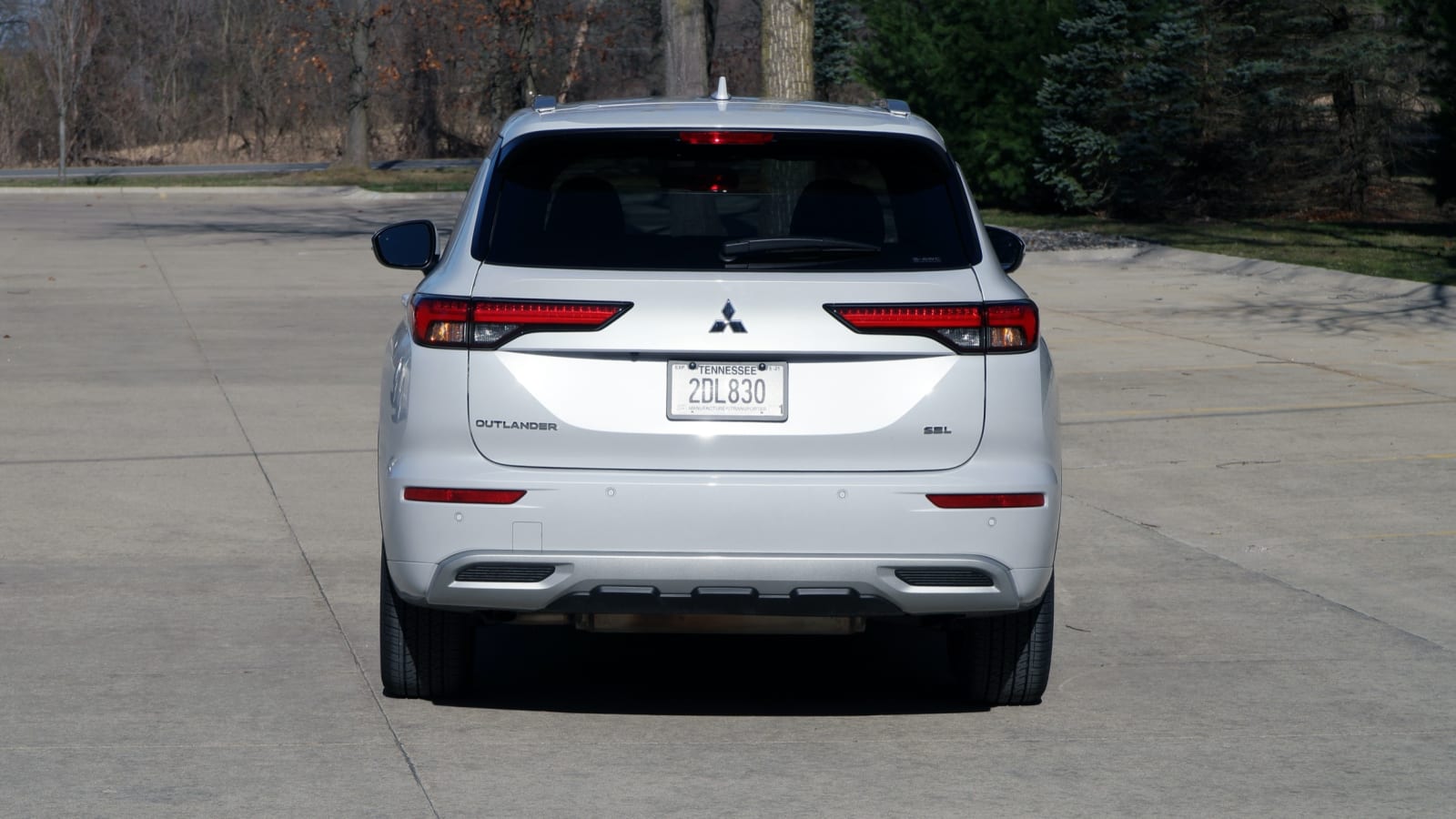 In reality, the 2022 Outlander is indeed larger in every direction than the 2020 edition (there’s no 2021 model) but in most measurements, is right about the same size as its compact crossover competitors. Its 106.5-inch wheelbase matches the Rogue, but the three-row Outlander is 2.4 inches longer overall. Compared to the 2020, there’s more adjustment for the driver to find a comfortable position plus an inch more legroom up front, and 1.1 inches more in the middle row. It’s 2.0 inches wider than before, which adds as much as an inch and a half more shoulder and hip room, depending on the seat. Weight was kept in check with an aluminum hood and plastic front fenders; base models weigh 3,593 pounds and an Outlander SEL with S-AWC all-wheel drive weighs 3,803 lbs.

There’s a total of 79.7 cubic feet of cargo space behind the front seats, up from 63.3 cu-ft in the old model. That’s more room overall than every compact crossover (Rogue, CR-V, RAV4, etc). There’s a similar improvement in the overall length of the cargo area, making long items easier to carry. With the second row in place, there’s 33.5 cu-ft of cargo space, which is midpack in the segment, and with the third row up capacity falls all the way to 11.7 cu-ft. That’s still better than the only other three-row compact crossover, the Volkswagen Tiguan, which offers only 10.3 cubes with its way back seat in place.

As you can see in our videos below, there is very little space for passengers in the third row. The second row does slide, and that can add some legroom in the way back at the expense of second-row sitters, but there’s still not enough headroom for even average-size people to feel comfortable.

The interior shares its basic layout with the Rogue, which is no bad thing — Nissan has one of the best interiors in the compact crossover class — and in fact, the Outlander’s is arguably more visually interesting. The materials in our top-shelf SEL model all felt like quality pieces. Many of the buttons and knobs have a nice knurled finish that effectively classes up the interior. There’s real aluminum trim, a metallic-hued composite and quilted leather in black or light gray. Opt for the Touring package and you’ll get semi-aniline leather with brown accents. Base ES models get basic black fabric with piano black plastic trim; the mid-level SE gains a suede material for the seating surfaces.

The Outlander’s seats are very comfortable — we wonder if they share the “Zero Gravity” design used by Nissan. We’re not big fans of the stubby gear shifter, which is similar to what’s found in the latest Rogue. It’s intuitive enough but doesn’t offer any actual improvement over simpler designs. Base models have an 8-inch screen while everything else has a nicer 9-inch display using a new touchscreen infotainment system that’s basically reskinned tech from Nissan. It’s easy to use and never bogged down during our testing. Apple CarPlay and Android Auto are standard across the board (wireless for iPhone users), and a 10.8-inch head-up display is optional on upper trims. Wireless phone charging is also available. A large and attractive 12.3-inch digital display with two different gauge cluster designs is optional on the SE and standard on the SEL. You can see how that works in the video below.

Power comes from a 2.5-liter four-cylinder engine. Equal figures of 181 horsepower and 181 pound-feet of torque are sent to the front or all four wheels (S-AWC) through a continuously variable transmission. The alliance that Mitsubishi joined has plenty more powertrain options that would seem ripe for the taking, but for now, the naturally aspirated 2.5-liter is the only choice. Soon enough, the plug-in hybrid model that soldiers on for 2021 using the old Outlander platform will debut on the new chassis. We look forward to finding out how far Mitsubishi is able to push its PHEV tech based on how much it improved the gasoline-only Outlander.

There’s a reasonable amount of gumption from the 2.5 liter in normal driving, and the CVT is programmed to mimic a traditional stepped transmission through eight preset ratios. In practice, that works fine most of the time, but everything falls apart when the driver asks for more than two-thirds throttle. When pressed past its comfort zone, the transmission forgets its manners and reverts to the unsavory CVT trait of locking the engine into its most powerful zone, causing the buzzing and droning that’s synonymous with these transmissions.

Part of the reason the powertrain drone is so noticeable is because the 2022 Outlander, which uses dual-pane glass all around, is otherwise very quiet. Wind noise is minimal, and neither road noise nor road imperfections make their way into the cabin thanks to the Outlander’s soft suspension tuning and isolated steering. The Outlander’s steering ratio is unexpectedly quick at just 2.6 turns lock-to-lock, and it feels precise and sends at least some feedback to the driver.

The structure is 33% more torsionally rigid than the old model and feels very solid. All of the suspension bits and pieces are similarly more rigid, and there’s more wheel travel than before. The ventilated disc brakes are significantly upsized over the previous Outlander, and stopping power feels strong and is easy to modulate. The ride is clearly biased toward comfort, which means there’s plenty of body roll when pushed, but ultimate grip is reasonable for a compact crossover designed to schlep people and cargo. 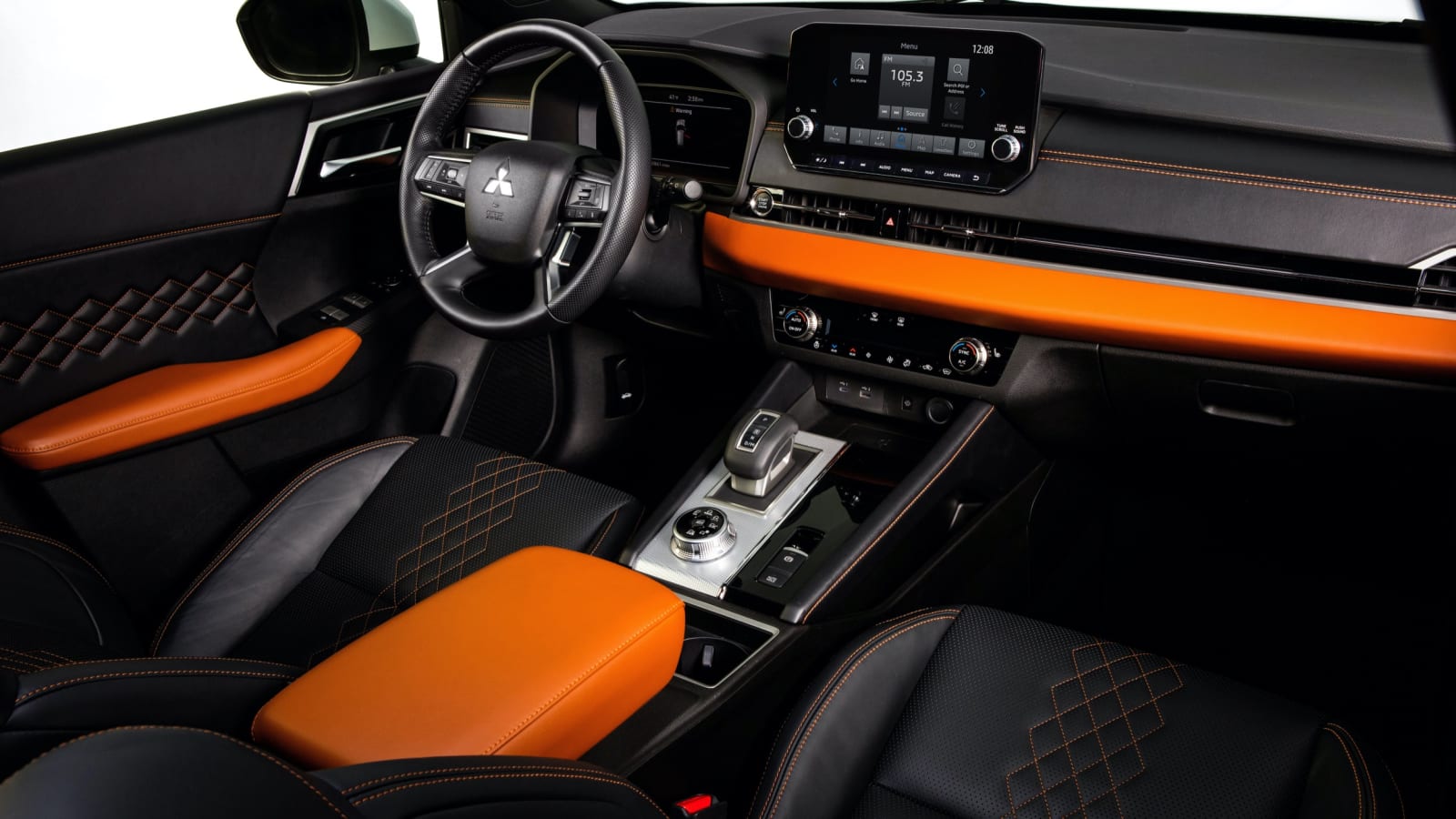 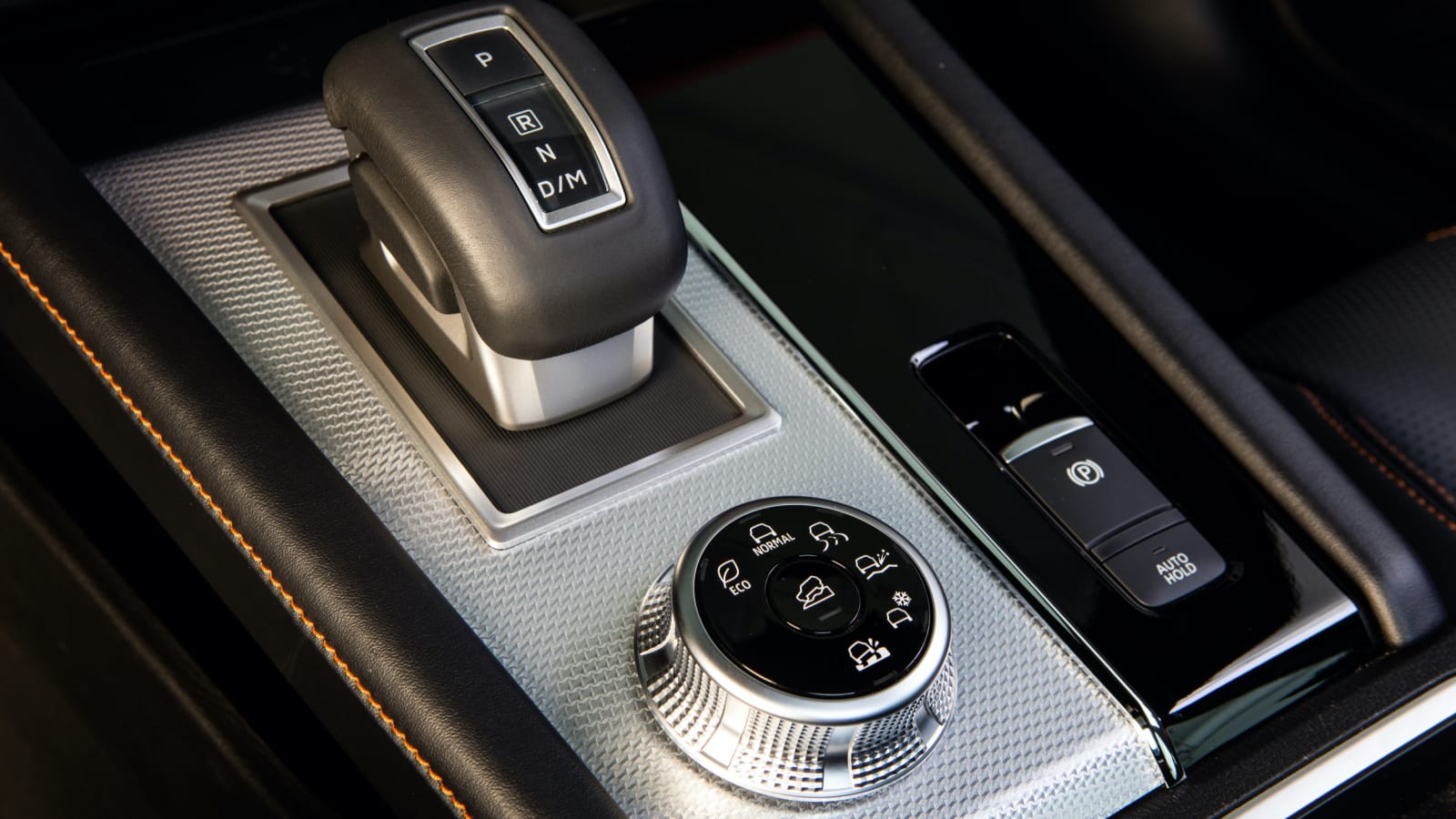 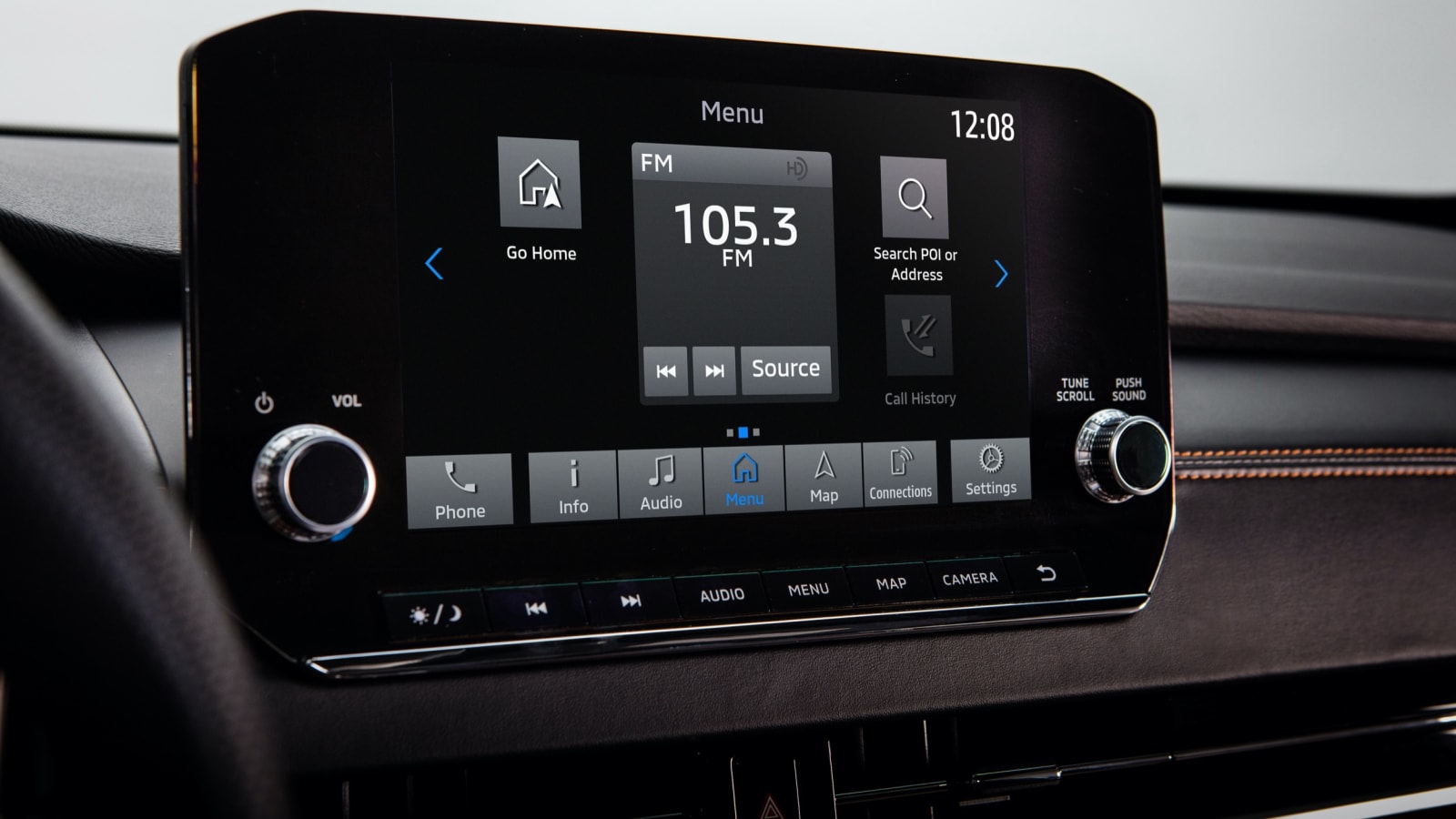 Partnering with Nissan brought advanced driver assistance systems to Mitsubishi’s arsenal. Mitsubishi calls its system MI-Pilot Assist and it includes adaptive cruise control, lane keep assist and, if optioned with it, navigation link that reads speed signs and the road ahead to automatically increase or reduce speed as needed. It uses the same hardware and software as Nissan’s ProPilot Assist, and it works equally as well. In our short test drive, the Outlander ably kept itself centered in its lane and followed the flow of traffic all the way to a stop and subsequent restart.

There are four drive modes on front-drive Outlanders and five on S-AWC models. The Eco mode dulls the powertrain way too much for regular use, so we left it in Normal most of the time. Tarmac is the sport mode, but we found its transmission programming entirely too aggressive to want to use very much. We weren’t able to test Gravel, Snow or Mud (the last only available with all-wheel drive), but they all rely on electronic aids along with engine and transmission tuning to improve traction.

Fuel economy isn’t great. Front-wheel-drive Outlanders are EPA rated at 24 miles per gallon in the city, 31 on the highway and 27 combined. All-wheel-drive models are 24 city, 30 highway and 26 combined. Front-wheel-drive Rogues with the 2.5-liter engine earn 27/35/30, matching the combined figures of the Escape, CR-V and RAV4. The three-row Tiguan gets 23/29/25, which makes the Outlander the most fuel efficient seven-passenger compact crossover should both of those elements are important to you. The Outlander can tow up to 2,000 lbs, a step up from the Rogue's 1,350 lb rating or the CR-V and RAV4's 1,500 lb limits. 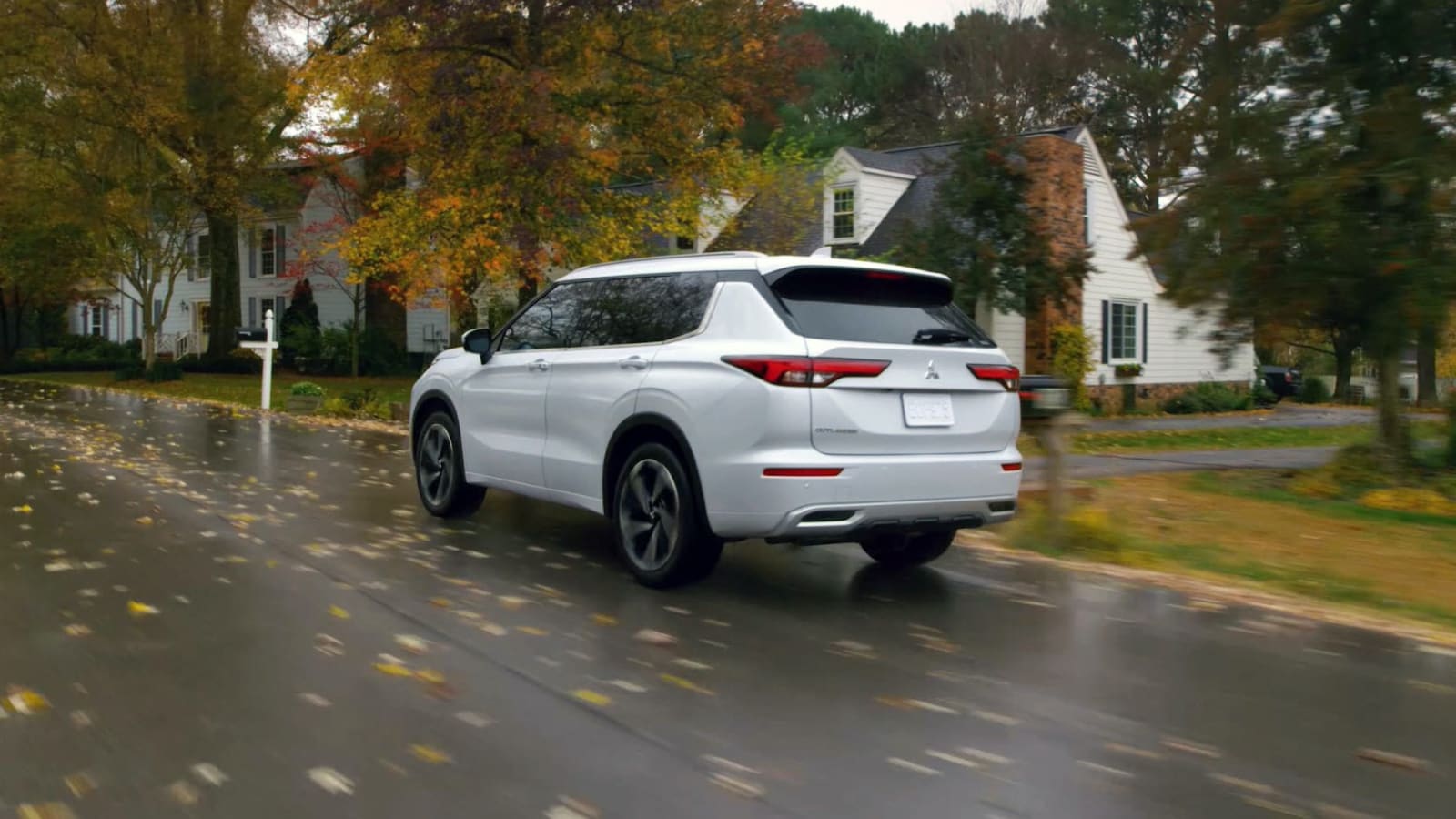 The range-topping SEL at $31,945 also strikes us as a good deal, considering how much equipment comes standard and the fact that it’s $3,585 less expensive than the Nissan Rogue Platinum. Mitsubishi’s generous warranty covers the vehicle for five years or 60,000 miles and the powertrain for 10 years or 100,000-miles, making a compelling case in Mitsubishi’s favor.

No matter which way you look at it, the 2022 Mitsubishi Outlander is significantly better than the 2020 edition it replaces. It’s more visually interesting, roomier, more comfortable and it performs better. It’s at the very least competitive in its segment, and there are legitimate reasons why it might be a top choice, particularly for those who think they need the versatility of a third row, even if only for children and for (very) brief periods.