Mercedes-Benz EQS reveals its powertrain and battery secrets in detail

It'll max out at 516 horsepower to start, but there's more to come Mercedes-Benz took us on a virtual ride-along in the new Mercedes-EQS with Dr. Fabbian Wuttke, project lead, sedan development. Along the way, he divulged a number of facts, figures and more about the electric sedan that we’ve been waiting so patiently to hear about.

The big number we already heard yesterday was Mercedes’ claimed 478 miles of range in WLTP testing. It’s difficult to say what that will translate into for EPA testing, but we can safely assume that the number will be over 400 miles. That comes thanks to a battery pack with 107.8 kWh of usable storage (we asked for the battery’s total potential size, but Mercedes isn’t telling yet). This gigantic battery pack is the larger of two packs that will be available, though Mercedes isn’t divulging what the smaller pack’s capacity is yet either. Mercedes brags of extremely fast charging and 400-volt architecture, though,

You’ll be able to charge the EQS at fast charging stations at speeds up to 200 kW. That’s good for 186 miles of range after just 15 minutes of charging (using the WLTP range as the basis for this argument). That’s equivalent to about 39% of charge in 15 minutes. This high rate of charging is maintained through the car’s battery temperature and charging management systems. There’s an “ECO Charging” mode available that reduces the rate of charge if you’re concerned about the wear and aging of the battery at those charging rates. 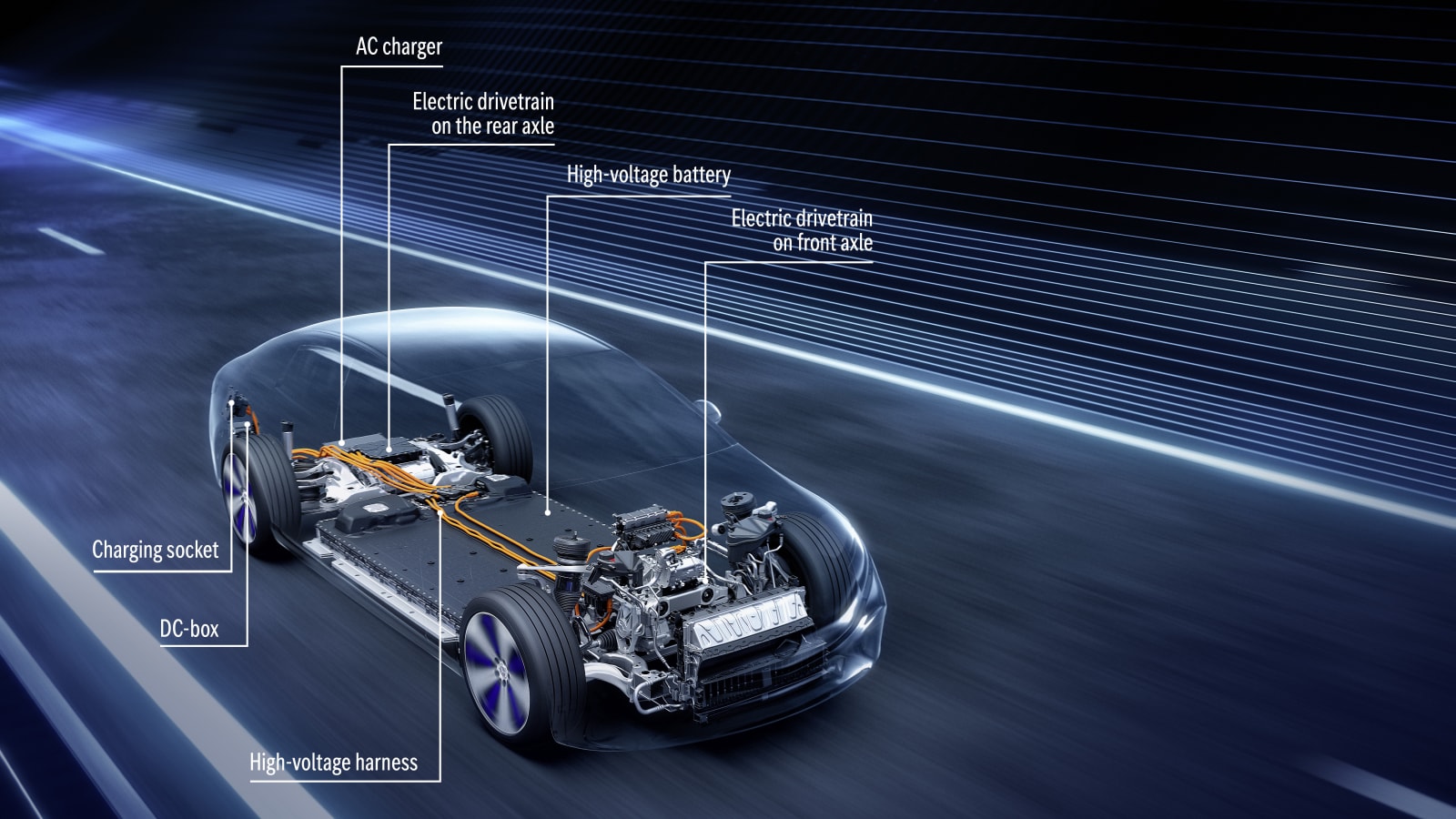 An easy charging method called “Plug & Play” will be available to U.S. owners (free for just two years) that, according to Mercedes, will allow you to simply drive up and plug in without needing to fuss with an app or other tech. It’s still vague, but Mercedes says that you’ll be able to use this tech at over 90% of public charging points in the country.

Mercedes is also talking about what those batteries will be powering. Several different versions of the EQS with varied power outputs will be available from the start. The base rear-wheel-drive EQS will produce 329 horsepower from a single motor on the car’s rear axle. A dual-motor (one in back and one in front) all-wheel-drive version with 516 horsepower will be available, too — the rear motor is more powerful than the front. Mercedes is teasing an “even more powerful performance version” that will come at a later date. That sounds like an AMG variant to us. The 0-62 mph time on the 516-horse version is 4.3 seconds, whereas the single-motor EQS will do it in 6.3 seconds. Top speed for both is limited to 130 mph.

Mercedes says this electric version of 4Matic all-wheel drive has much faster response versus its mechanical all-wheel drive systems. That’s to be expected with electric motors. The motors themselves are engineered with a special foam mat surrounding them for exceptional resistance to NVH issues. A whole host of extra work contributes to making these motors incredibly quiet and fit for S-Class level noise and vibration comfort. Acoustic foam used throughout the body helps deliver silence to the cabin. New technologies were also engineered for the window seals and door structure to reduce noise — there will be an “acoustic comfort package” available that adds laminated glass panes to the car. However, Mercedes will also point out that the car’s 0.20 coefficient of drag (best of any current production car) also reduces wind noise. It has a smooth underbody, aero-shaped spoilers and you’ll have the choice between 19-, 20- and 21-inch wheels. Also contributing to this figure are special, new A-pillar trim strips and seamless door handles. 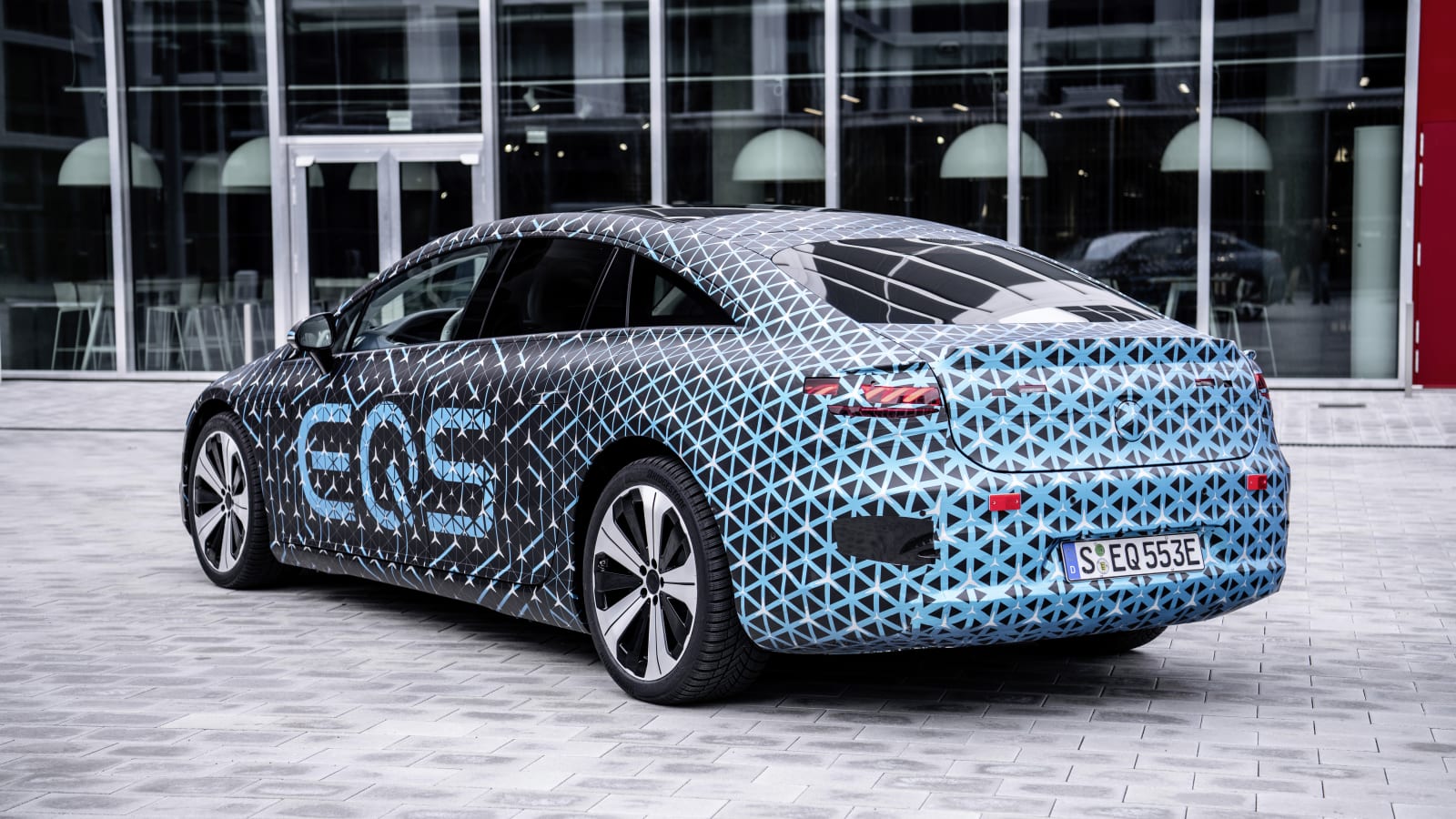 One-pedal driving will be possible with the EQS. Shift paddles on the steering wheel will allow you to swap between three levels of brake recuperation. Also convenient in the city will be a four-wheel steering system. Just like the new S-Class (the systems are nearly identical), Mercedes will allow you to choose between an option that can turn the rear wheels 4.5 degrees or 10 degrees. At its best, the turning circle can be reduced to just 35.8 feet. Interestingly, Mercedes tells us that four-wheel steering will be one of the items it offers as a post-purchase upgrade, allowing you to upgrade to the 10-degree lock if you realize the 4.5 isn’t enough initially.

A miscellaneous item Mercedes highlighted is its “Navigation with Electric Intelligence” system. Just like many EVs, the EQS will plan your route around available charging stations. It will also take into account real-time traffic, and you can automatically set how much charge you want left in reserve to make it to a charging station. The EQS can estimate how much a charging stop will cost on the screen for you and will automatically monitor your efficiency and navigation system, just in case you need to switch into ECO mode to eke out the last few miles to a plug. 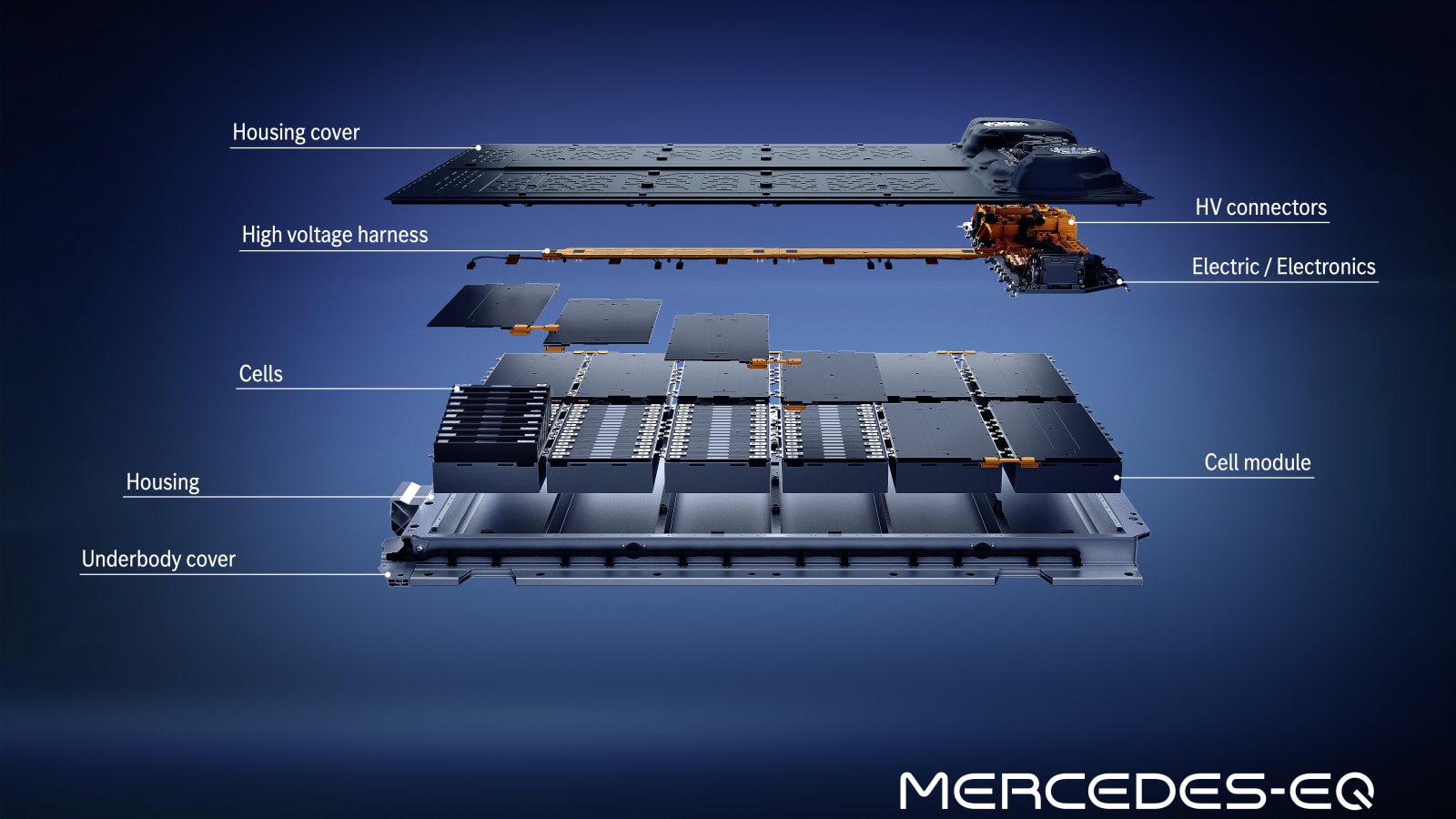 Mercedes also highlighted a few instances in which it’s using sustainable and green materials to manufacture the EQS. In total, the EQS has about 176 pounds of recycled or renewable materials within it. These include recycled plastics for cable ducting, recycled yarn for floor coverings and even sustainably produced aluminum for the hood. The battery pack itself (developed in-house by Mercedes) uses less cobalt and improved battery chemistry than Mercedes' previous generation of battery tech did, and it's also capable of receiving over-the-air battery management system updates. Don’t get it wrong, though. The EQS can still be fully decked out in real leather and other ultra-luxe materials — there are no vegan options to speak of here.

Even though this is the second recent deep dive we’ve had into the EQS, Mercedes is still holding back on revealing the whole car. That virtual event will come on April 15, so the wait is nearly over.