It has distinctive dimensions, many battery/motor combos and cutting-edge tech The parade of new electric vehicles continues with the 2022 Kia EV6, a crossover-ish vehicle with surprisingly aggressive performance numbers. Although we have previously seen the EV6, today we get new pictures and key specs, including a maximum range of 316 miles on the WLTP combined cycle (EPA range would be less), a minimum 0-60 time of 3.5 seconds in the EV6 GT model, and a recharge from 10% to 80% in just 18 minutes thanks to the 800-volt charging capability on every version.

The EV6 uses the same Electric-Global Modular Platform (E-GMP) as the Hyundai Ioniq 5, and roughly shares its available battery capacities. However, as is often the case with Hyundai and Kia vehicles that share a common platform, they clearly split early in the development process, as their dimensions, specs and designs show little sign of common DNA.

The EV6 wheelbase of 114.2 inches isn't as unusually lengthy as the Ioniq 5's (118.1), but is still considerably longer than the VW ID.4 and Nissan Ariya. Its overall length is greater than all of the above, however, at 184.3 inches (or 184.9 for the EV6 GT), a figure that puts it closer to the 186-inch Mustang Mach-E. At 61.0 inches tall, it is 2 inches shorter than both the Ioniq 5 and Mach-E, which themselves are pretty low for vehicles considered crossovers. In other words, like so many electric vehicles, the EV6 has unusual dimensions resulting from engineers and designers taking advantage of the inherent differences between a dedicated EV platform and an internal combustion one. Like the Mustang Mach-E, the EV6 offers a diverse menu (some would say complex) of performance and range that's dictated by battery size, driven wheels and trim level.

The EV6 and EV6 GT-line (pictured in red above) offer a choice. Things start with a 58 kilowatt-hour Standard Range battery pack. When paired with a rear motor only, it results in a rather modest 168 horsepower and 258 pound-feet of torque. Adding a second motor for all-wheel drive pumps things up considerably to 232 hp and 446 lb-ft. Kia did not indicate range estimates for this battery pack.

The available 77.4-kWh Long Range battery pack kicks output up to 232 hp and 258 lb-ft with the rear motor only. It is this version that results in the best possible range, an estimated 510 kilometers or 316 miles on the WLTP cycle, which should likely put the EPA range in the mid-to-upper 200-mile range. The second motor/AWD yields 321 hp and 446 lb-ft, but no range estimate was given.

The EV6 GT comes only with the pairing of Long Range battery and more powerful motors on both axles that results in 577 hp and 546 lb-ft of torque (it also gets an electronic limited-slip differential). This is the version that Kia says will go 0-to-60 mph in 3.5 seconds. No Ioniq 5 comes remotely close to this performance, and you'd have to look to higher-end Teslas and the upcoming, top-of-the-line Mustang Mach-E GT Performance to get that sort of neck-snapping acceleration from an EV or any number of high-end ICE sports cars. We were not expecting that.

All versions support 400-volt and 800-volt charging, with the latter enabling an ultra-fast 10-80% recharge in 18 minutes. It can also regain 62 miles of range (again, WLTP) in 4.5 minutes. This capability is shared with the Ioniq 5 and is a key attribute of Hyundai's E-GMP platform. Another atypical benefit is the EV6's Integrated Charging Control Unit (ICCU), which includes a "vehicle-to-load" function that basically turns the car into a generator. Kia says it can supply as much as 3.6kW of power that can operate a 55-inch TV and an air conditioner simultaneously for more than 24 hours. It can even charge another electric car. Nifty.

As with most other EVs not produced by Audi or Porsche, the EV6 allows for one-pedal driving. However, it stands out by offering six regenerative braking levels: none, 1 to 3, auto mode and "i-Pedal," which is the maximum mode that can bring the car to a stop without the driver touching a pedal. 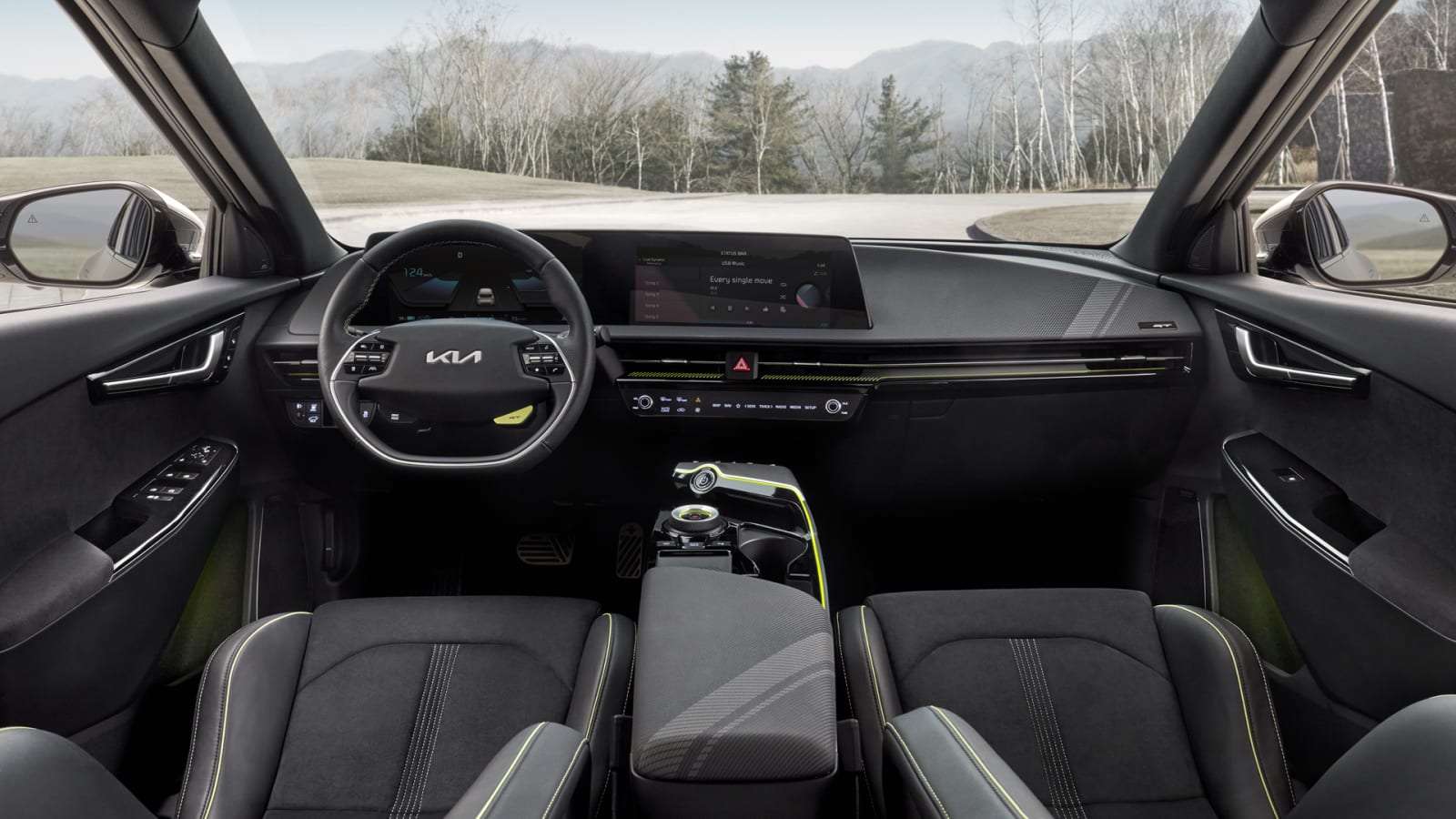 Now, having touched on the electric vehicle requisites of maximum range and 0-60 times, let's move inside to discuss the other must: a big touchscreen. The EV6 has a pair of curved 12-inch screens – one for the instrument panel and the other touch-operated for the infotainment system. The latter is angled toward the driver, which is always appreciated. Judging by the photos, this appears to feature a new UI for Kia. We hope it'll remain just as user friendly as what's available now.

Admittedly, the EV6 screen isn't as eye-popping as Tesla's or the Mustang Mach-E's, but its curved display is pretty cool and the available head-up display features augmented reality capability like the new Mercedes S-Class. The HVAC controls are also a separate touch-operated panel, which is configurable. Over-the-air updates are possible.

The uni-spoke steering wheel looks vaguely similar to what you'd find in the EV6's corporate cousins, the Genesis G80 and GV80. Speaking of those, the EV6 is the only other Hyundai Group vehicle besides them to offer the next-generation Highway Driving Assist II that builds upon the advanced adaptive cruise control and lane-keeping system available on the Kia Telluride and other Hyundai Group Vehicles with a machine-learning capability that allows for automated lane changes and adjusts its behavior to the driver's style.

Basically, Kia has thrown every tech feature at its disposal at the EV6, while also providing clear differentiation between both its Hyundai Ioniq 5 cousin and various other electric cars. Pricing was not announced, but considering the differences in available performance, we would expect the price range to be similarly vast. The EV6 will be produced in Korea and will go on sale in the second half of 2021 with online reservations starting today (March 30). It also expects to sell 20,000 in the United States.

"EV6 is the embodiment of the new Kia," said Kia President and CEO Ho Sung Song in a press release. "(It) represents the beginning of Kia's long-term commitment to sustainable mobility, accelerating the transition not only to clean transportation, but also products, materials and manufacturing."

The company says it will produce 11 new electric models by 2026, with seven built on the E-GMP platform and four based on existing models. It also says that 40% of Kias will be electrified (EV, plug-in hybrid and regular hybrid) by 2030.