It's the highest performing Bentley yet Fast news is coming out of the UK today in the form of a new Bentley Continental GT Speed. Similar to the previous generations of the Continental GT, this latest version is getting the Speed treatment. Bentley may be talking endlessly about its green future, but until that materializes, the British marque is continuing to pump out W12 master classes of luxury and speed.

The idea is the same as all “Speed” versions of recent Bentleys. Add power, increase handling abilities, and make it look faster. Power from the 6.0-liter twin-turbo W12 increases to 650 horsepower (24 extra ponies), while torque remains constant at 664 pound-feet. The extra power comes from increasing the manifold pressure in the upper rev range, meaning the extra power is all the top. This results in a 0.1-second reduction in the 0-60 mph time, which is now down to 3.5 seconds. Top speed is a lofty 208 mph, which is a 1 mph increase from the non-Speed. See, it’s speedier!

While the power gains are admittedly small, the other performance improvements Bentley made look like they’ll be much more noticeable from behind the wheel. For one, the eight-speed dual-clutch transmission reportedly shifts twice as fast in Sport mode as it does in the regular W12 model. The engine and transmission calibration is also revised to make its upshifts higher in the rev band and downshift earlier. Bentley says the exhaust is much louder with greater “character” than the standard car, too.

The chassis and drive system get significant updates for better handling. The car's big new party trick is four-wheel steering, which is becoming increasingly common for large luxury cars. As you might expect, the rear wheels turn opposite the fronts at low speeds for better agility, and the rears turn the same direction as the fronts at high speeds for better stability. This means the Continental GT Speed should feel more nimble and quick on its feet than lesser versions. 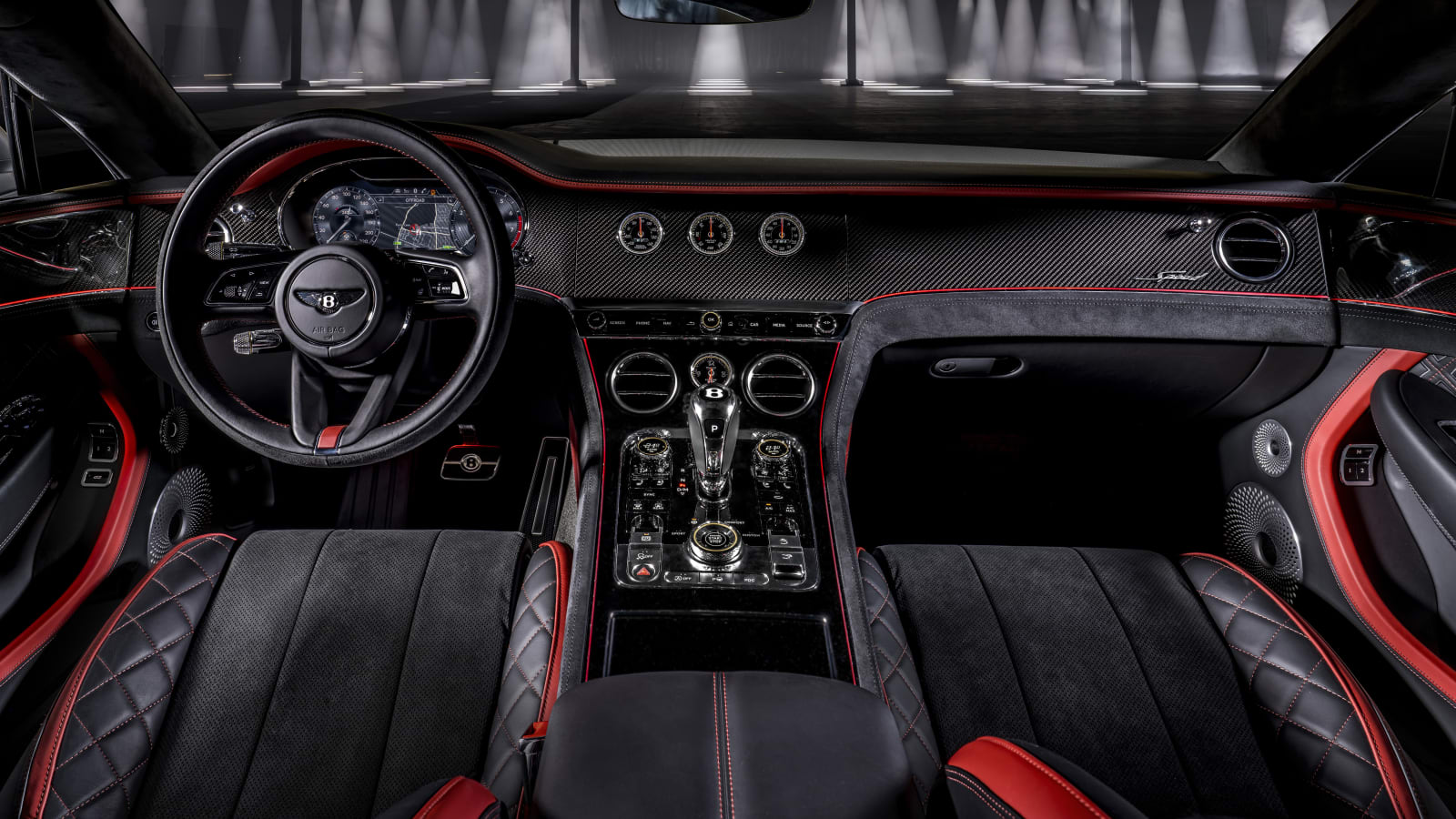 Additionally, Bentley says it’s using a new all-wheel-drive torque split and traction control calibration “to provide a noticeable character shift” for the Speed. Basically, they’re loosening the reins a bit, which will ultimately result in the Speed feeling more tail-happy and eager to rotate in corners. Brake-based torque vectoring is implemented in the Speed for when you want to power through corners more efficiently, too.

A new (and first for the Continental GT) electronic limited-slip differential should also make putting the power down all that more enjoyable. Bentley says the eLSD offers improvement in on and off throttle adjustability, improved turn-in response and better straight-line performance. The last big improvement for a better driving experience is the adoption of newly-engineered carbon-ceramic brakes. Ten-piston front calipers and four-piston rear calipers clamp onto the new carbon discs. They reduce unsprung mass by a massive 73 pounds, but it's still a heavyweight at 5,011 pounds. New 22-inch Speed-specific wheels in bright silver are standard, but you can spec two different dark-painted options, too.

There aren’t a ton of appearance differentiators between the Speed and regular Continental GT, but it’s still identifiable as the faster model. There's a dark-finish grille, lower and more aggressively sculpted side sills, and chrome “Speed” badging on the front fender.

You’re greeted on the inside with illuminated Speed sill plates and unique two-tone interior options. There are 15 main color and 11 secondary color options you can pick from, and while Alcantara is the standard dominant material, an all-leather interior is available, too. There’s a “Speed” logo on the passenger side of the dash, and it’s embossed on the headrests. Piano Black wood veneer is the standard trim treatment, but you can choose from a number of more traditional-looking wood trims, too. The one finish unique to the Speed is a “Dark Tint Engine Turned Aluminum” treatment that is applied to the center console optionally. Lastly, Bentley designed new digital animations for the Speed's instrument cluster and uses a unique pedal set.

Pricing for the 2022 Continental GT Speed starts at $274,900, before the destination charge and gas guzzler tax. In case you were worried, Hallmark assured the media in a briefing that this car is no swan song for the Bentley W12 engine. There will be more to come before Bentley makes the transition to PHEVs and full EVs. You can claim your place in line and order one in the U.S. now — deliveries begin in the third quarter this year.