We don't know what it will be called yet, but it's beefier than the Trail Boss

Chevrolet is working on a Silverado with bigger teeth than its current Trail Boss, and new spy photos distributed today provide some proof that what we're looking at is more than some appearance package. Whether GM chooses to refer to it as a "ZR2" or something else remains to be seen, but it's clearly a step above what the company currently sells in the full-size pickup segment.

This prototype is riding on a set of what appear to be remote-reservoir shocks, which you won't find on any of Chevy's factory half-tons. The only truck with remote-reservoir shocks in GM's current stable is the Colorado ZR2, but we're going to stop short of saying GM has optioned Multimatic's sublime DSSV shocks for the Silverado application. While photos of a prototype are often inconclusive, the design of the shock absorbers seen here is dissimilar enough from what is equipped on the Colorado that they could be something else entirely.

We can also see that Chevrolet has a four-leaf spring setup on this prototype, while the standard Silverado utilizes just three. It's also wearing a set of Goodyear Wrangler Territory MTs in 275/70R18 — a 33-inch tire. This is smaller than what you'd see on a Ford F-150 Raptor or Ram 1500 TRX, but beefier than what is fitted to the current Trail Boss. Lending further credibility to the ZR2 theory is the fact that this prototype has bumper inserts disguising what appears to be a treatment that is very similar to (and likely inspired by) the Colorado ZR2's.

The current Trail Boss is built around the Z71 off-road package, which includes a locking rear differential, skid plates, Rancho shocks, 18-inch black wheels and Goodyear off-road tires. Trail Boss models add a two-inch lift and some rugged styling cues, but you don't get any other significant mechanical upgrades.

We don't know for certain yet whether this model will join the Silverado lineup when it receives the refresh expected for the 2022 model year. Our spies tell us that this prototype appears to be in the early stages of development, which would make a 2021 debut unlikely, but we can't completely rule it out. 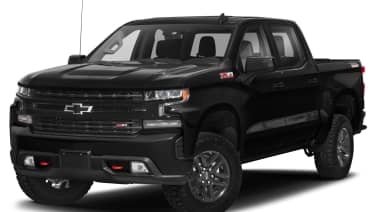 $862 - $3,483 Nat'l avg. savings off MSRP
See Local Pricing
I'm not in the market for a vehicle at this time. Please move this suggestion to the side for 30 days.
Huge Savings