With Pinto engine and top made of duct tape, this Mustang heads for the glue factory. Ford built Mustangs on the Fox platform from the 1979 through 1993 model years (or until 2004, if you consider the SN95 platform a sufficiently close relative to its Fox ancestors), with versions running the gamut from Late Malaise Era Ghia Editions with straight-six engines through respectably quick later 5.0-powered machines and even Mustang Police Interceptors. I got pulled over by CHP Mustangs on I-5 a couple of times in my 351W-swapped '68 Cyclone, and those Foxes zooming up in the mirror seemed pretty quick at the time. Today's Junkyard Find, however, was not a quick Fox, and then there's that scary convertible top. 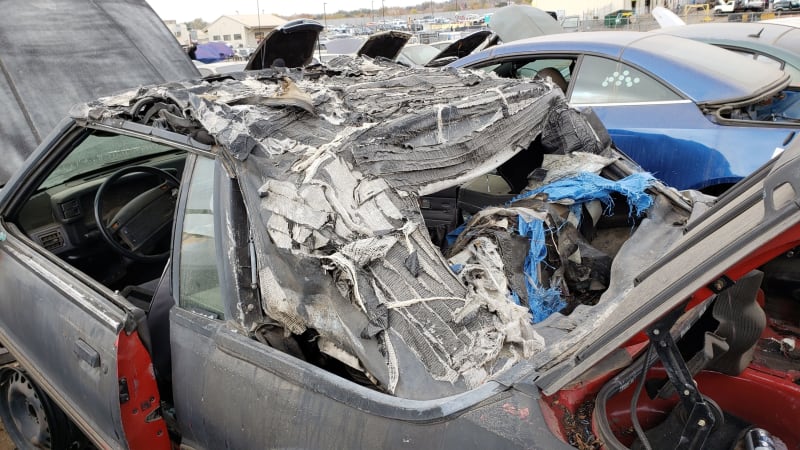 The murderously UV-heavy sunlight here in High Plains Colorado conspires with single-digit humidity to nuke convertible tops and car interiors in a hurry, and the final owner of this '93 Mustang tried to save some money by repairing its lid with blue tarps and layer upon layer of itchy duct tape, topping off the whole mess with a few coats of black spray paint. In fact, the black spray paint went over the original red bodywork in addition to the convertible top, because why not? 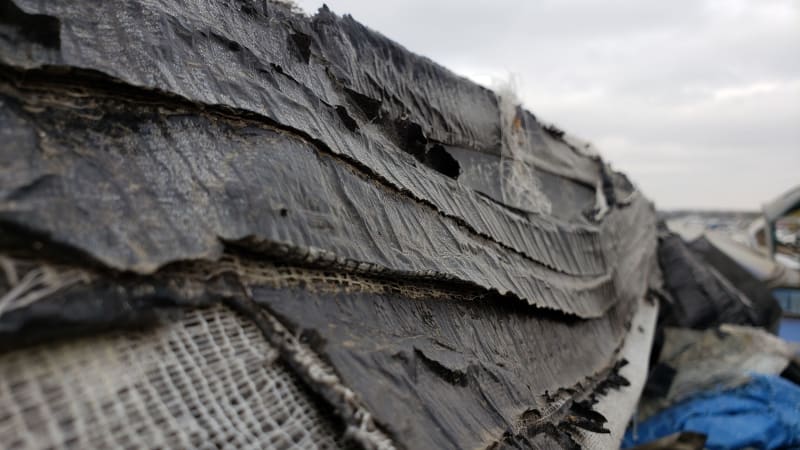 Did this work? Not for long! 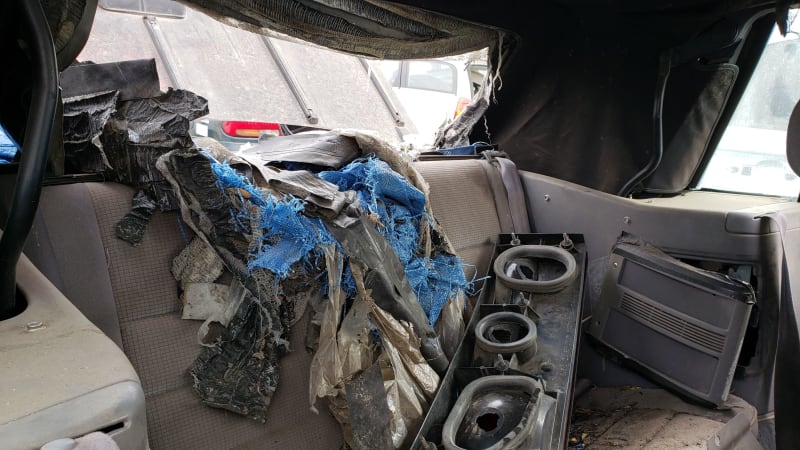 I see a lot of field-expedient duct tape engineering of this sort in junkyards, but generally it's just a single broken glass window patched with tape, not an entire roof. The real gone cats get duct tape in patriotic colors and create a window replacement that looks like an American flag, of course. We must admire the dedication it took to re-roof this car, but the results were… not so long-lived. 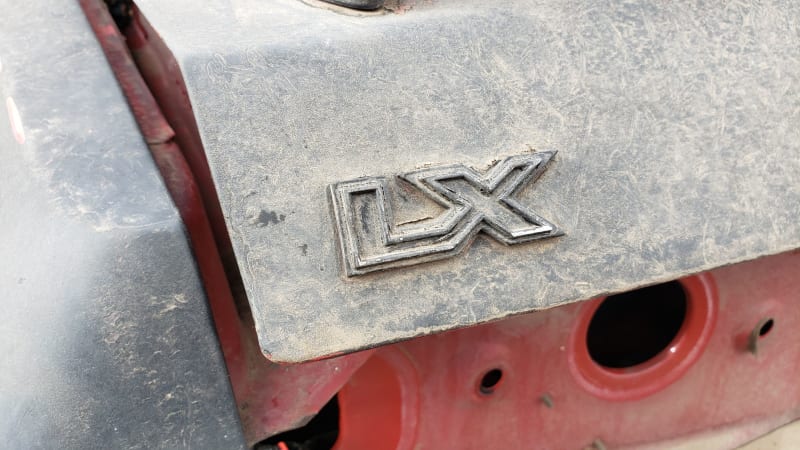 Three flavors of Mustang convertible could be purchased new in the 1993 model year, the last one for the pure Fox: the GT, the LX 5.0, and the LX. This car is the third, cheapest type. 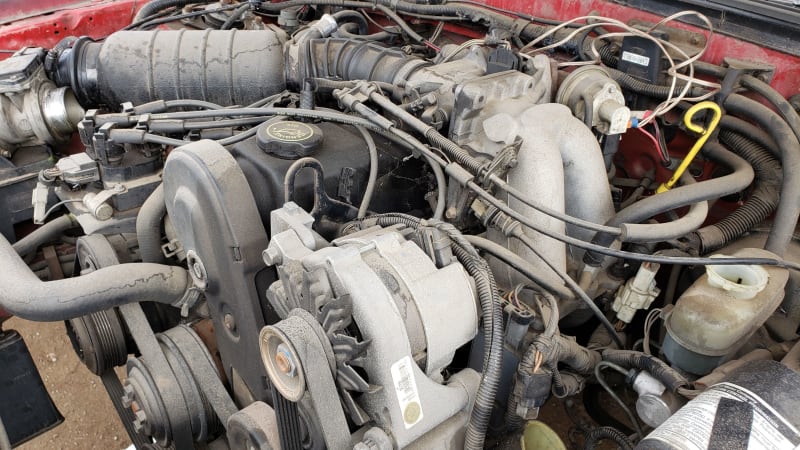 Under the hood, we find the 2.3-liter "Pinto" four-cylinder engine, rated at 105 horsepower for 1993. This was the last model year for a four-banger in a Mustang until the current generation, and the EcoBoost makes a lot more power than the most fearsome V8 you could get in a 1993 Fox. 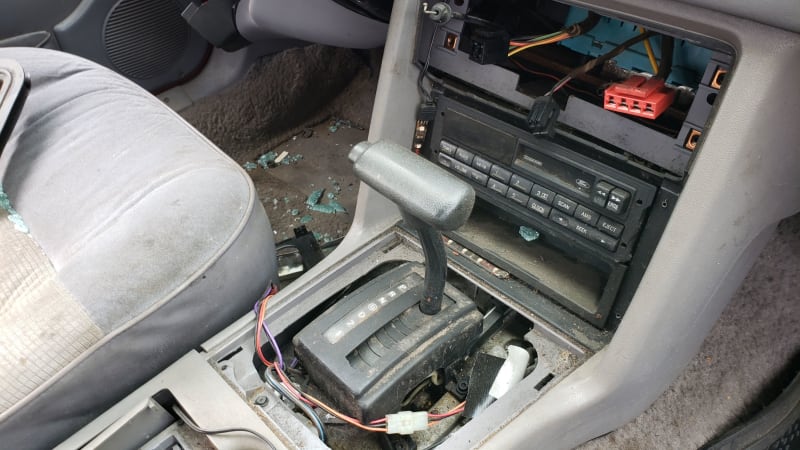 With the automatic transmission, this car would have been one slow pony. Still, convertibles are fun, and at least this one had a factory cassette deck for playing the latest Gibby Haynes jams. 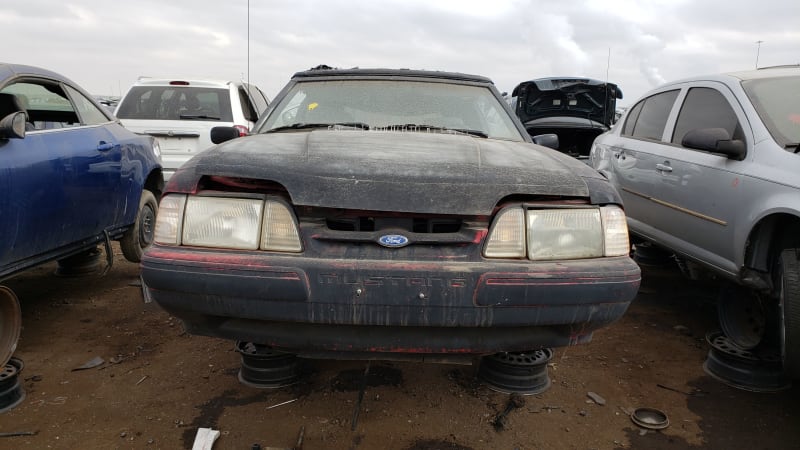 When you wanted to live the New Jersey Dream™ in 1993, the last year of the Fox Mustang was for you!