'The market has been waiting for our #BEV-ramp-up'

LONDON/FRANKFURT — When the market value of Germany's Volkswagen briefly rose above the 100-billion-euro mark on Wednesday for the first time since 2015, the boss of the normally staid carmaker took to Twitter, Elon Musk-style, to crow about it.

VW shares soared as much as 6% after investment bank UBS raised its price target on the stock by 50% and said the company's new electric vehicle platform was set to challenge Tesla's dominance in the battery electric vehicle (BEV) market.

"The market has been waiting for our #BEV-ramp-up and wanted to see some proof points," Diess posted.

Analysts from @UBSschweiz tore down our ID.3 – and raised their price target by 50 percent to 300 euros afterwards. The market has been waiting for our #BEV-ramp-up and wanted to see some proof points, so here we are…(2/2)

Traders reacted with comparisons to Tesla chief Elon Musk who frequently uses Twitter to talk up products developed by his companies, cryptocurrencies or other buzzing technologies.

The comparison, at least for now, must end there.

Diess sent his first tweet using the "@Herbert_Diess" handle less than two months ago and has since tweeted 51 times. While he has managed to amass almost 25,000 followers in this time, Musk can boast of 48.3 million.

"The sheer fact that he started his own account apart from the official VW account tells me, that between the lines he wants to express: We are here," a Germany-based trader said.

Though unrelated and more a market-moving tweet, another trader highlighted instances of a probe by the U.S. Securities and Exchange Commision on Musk's tweet in 2018 that he was considering taking Tesla private at $420 a share.

But despite recent share price gains -- up 20% this year -- VW's market capitalization is just one-sixth that of Tesla. Shares trade 7.5 times 12-month forward earnings; possibly its role in the EV transition is not fully priced.

On the market capitalization gap, UBS said VW's only takes into account its EV business out to 2025, and doesn't price its cash flow-rich legacy business, indicating there is room for the share price to rise.

It added that VW would likely "master" the transition to close the volume gap with Tesla in 2022. 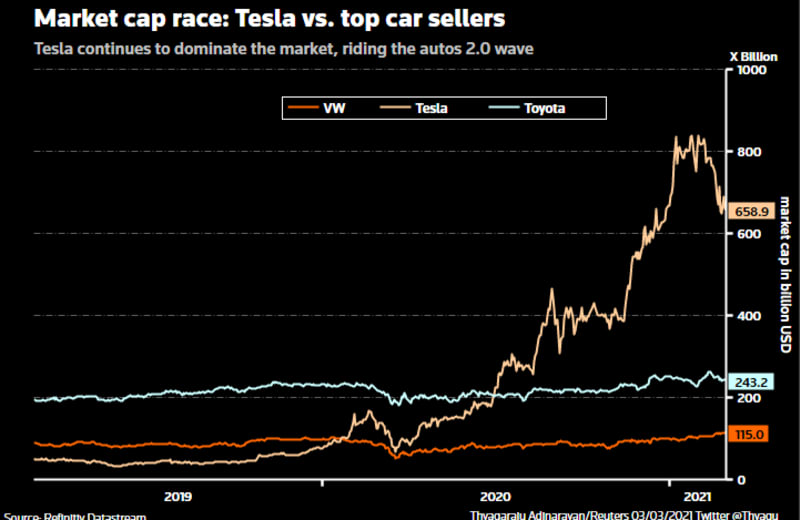 Preferred shares, which are listed in Germany's benchmark DAX index, hit January 2018 highs on Wednesday, while ordinary shares rose as much as 5.6% to their highest since July 2015, two months before the diesel scandal broke.

(Reporting by Thyagaraju Adinarayan in London and Christoph Seitz in Frankfurt; Editing by Sujata Rao and Jonathan Oatis)