Under normal circumstances, right about now would be the time that Porsche would call us up and invite us to a winter driving program designed to demonstrate the capabilities of its all-weather, all-wheel-drive cars. Perhaps somewhere in the Alps. We’d say, duh, hop on a plane to Germany, and find ourselves ensconced in a Bavarian winter wonderland for a few days.

That obviously didn’t happen this year. But rather than complain about it, which would be extremely tacky, we decided to come up with a near-enough approximation close to home. Instead of flying to Bavaria in a Porsche, we would drive a Porsche to a little slice of Bavaria right here in Michigan: Frankenmuth. Consider it part two in the saga of driving Porsches to deceptively named locations during the Covid-19 pandemic — West Coast Editor James Riswick already drove a Cayman GT4 from Portland to Detroit.

This time, the chariot is a 2021 Porsche 911 Targa 4S in a wintry shade of Night Blue Metallic. A Targa may seem an odd pick for winter driving, but Porsche considers it a four-season car. It’s certainly better-insulated and more suited to the cold than the rag-top Cabriolet. Plus, Porsche continues to only sell it in all-wheel-drive 4 and 4S configurations. It’s practically begging to be an all-season car. 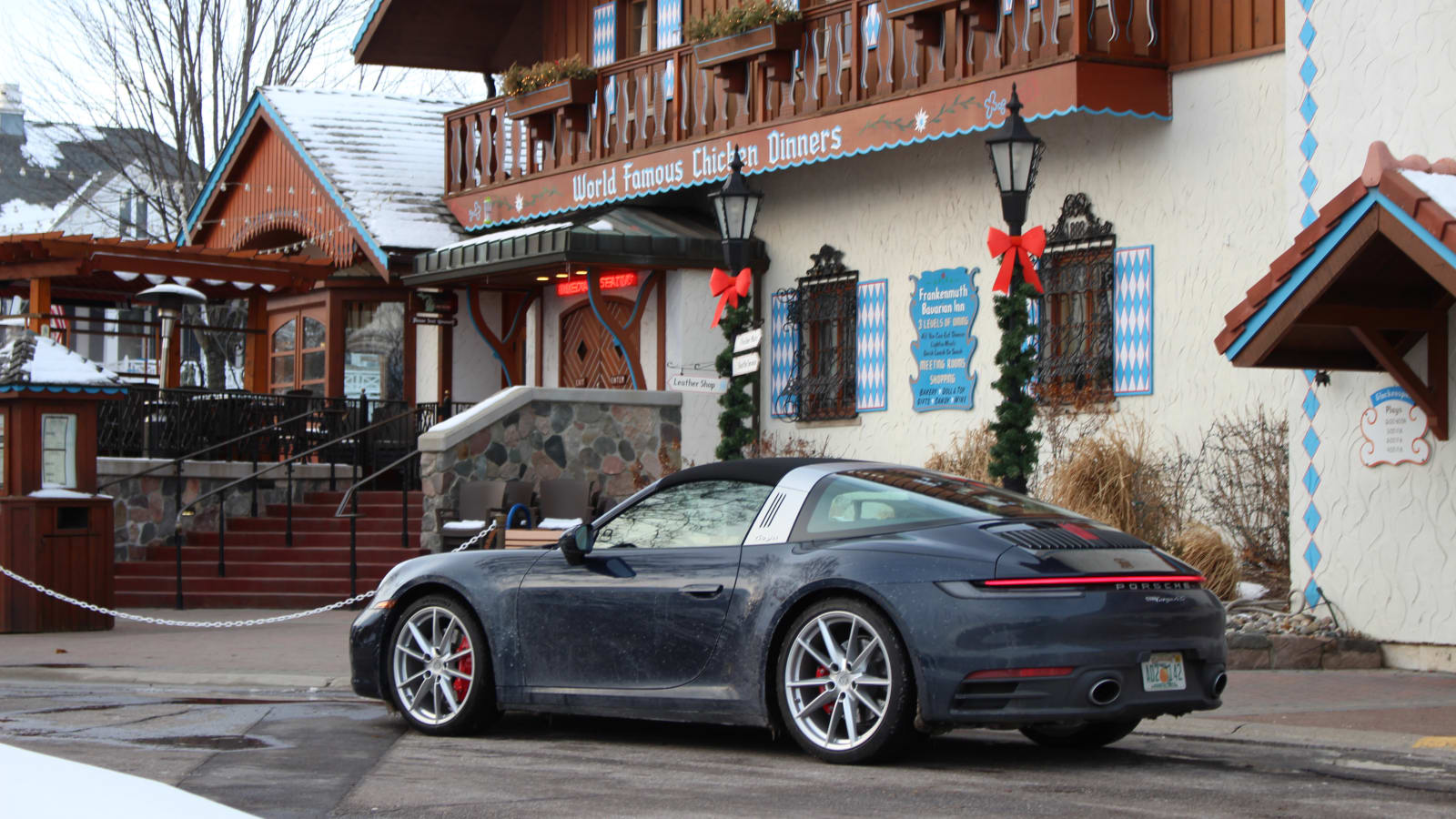 Most Michiganders likely know of the town called Frankenmuth, but it’s a befuddling place if you’re unfamiliar. It lies about 100 miles north of Detroit, and is certainly in the running for being the most German town outside of Germany. Every building in the downtown corridor is styled to make it appear at home in a cozy German village. There are restaurants named the Bavarian Inn and Zehnder’s. You can travel over the Holz-Brücke bridge to visit the Schnitzelbank Biergarten. And if you’re still hungry, there’s a Frankenmuth Cheese Haus with a Prost Wine Bar right across the street. Bronner’s, the largest Christmas-themed store in the world, is the icing on the Black Forest cake.

The journey there from our starting point in Ann Arbor is filled with multi-lane highways and deserted farmland roads. The Franconians who immigrated here and founded Frankenmuth back in 1845 didn’t enjoy the same luxuries. They sailed from Bremerhafen to New York (with a drunken captain, no less), took a steamboat and then a second ship from there to Bay City, Mich., and finally pulled that second ship 15 miles up the Saginaw River to their new and barren, unsettled land — in case you were curious, the Native Americans who were living on nearby lands had already been driven from the general area.

The immigrants’ journey took over two months in total. Our 2021 journey to Frankenmuth took just under two hours, and a grand two hours it was. 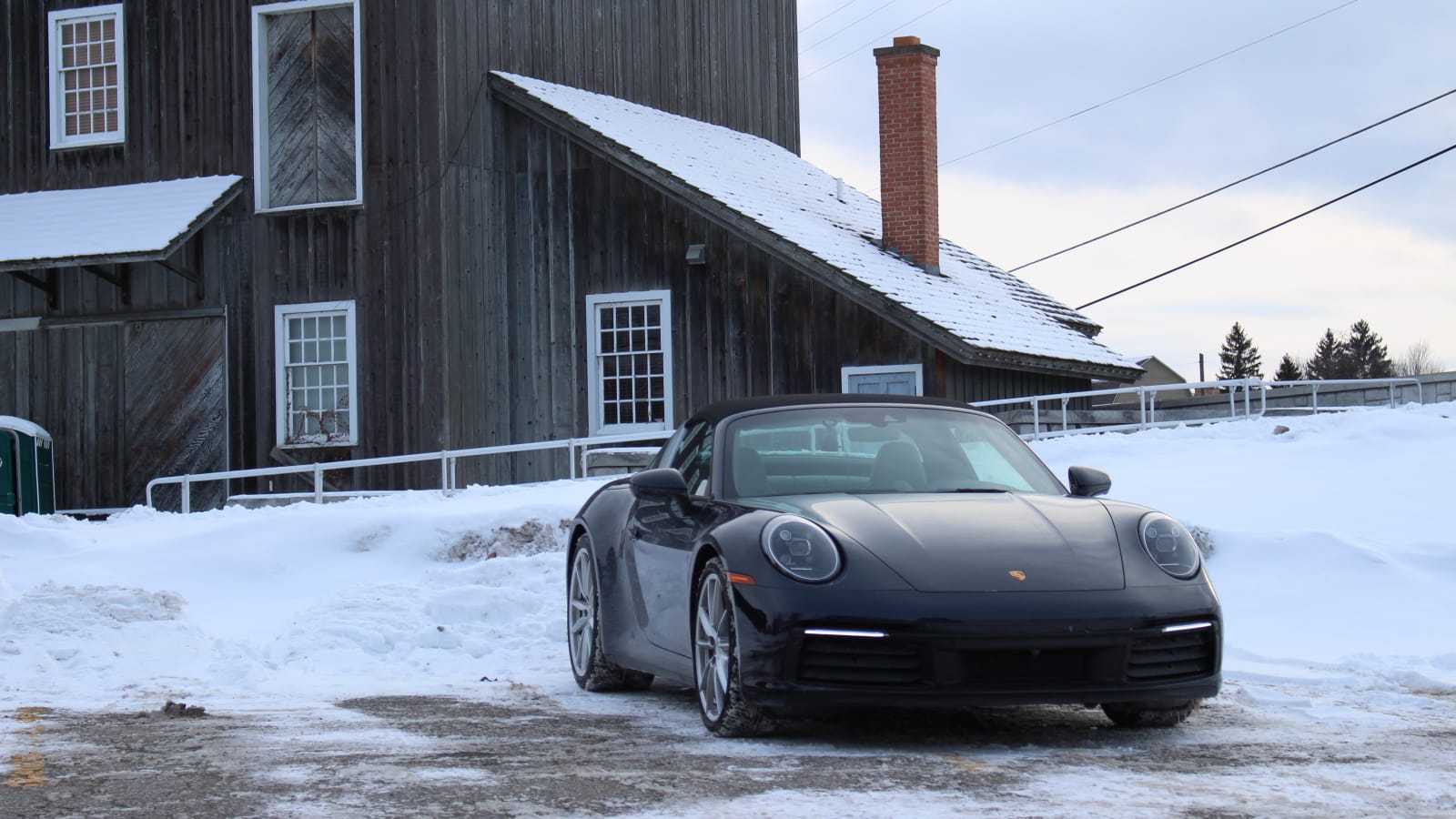 Despite the 911 still handling, accelerating and braking like a sports car, its size and weight puts it further into the GT car category with each passing generation. The Targa is perhaps the furthest evolved GT already, as it’s even heavier than the Cabriolet (by 41 pounds) and the chassis is tuned to be the slightest bit more livable than a Coupe. You can remove the uniquely complex top in 19 seconds to bask in the sun during the summer and leave it in place all winter with seemingly no compromise. Porsche makes it plenty capable of demolishing any racetrack with ease, but anybody who’s serious about track days will be much better off in the Coupe, which slashes 198 pounds off the Targa’s curb weight.

We hop onto the highway to begin, twisting the steering wheel mode dial to “Sport” as the light turns green in preparation for the double-curved on-ramp to come. A big number pops up in only a brief instant. Yep, the 911 is still stupid quick. My girlfriend in the passenger seat (who rode in a GT-R the other week) is even in awe of how effective the acceleration and initial launch is from the 3.0-liter twin-turbo flat-six hanging out the back. Porsche says the 4S — 443 horsepower and 390 pound-feet of torque — will hit 60 mph in just 3.4 seconds with PDK and the Sport Chrono package, as this test car is equipped. It feels closer to 3-flat from the seat of the pants.

After letting off the throttle to a chorus of crackles and pops, I twist it back into Normal mode, put the Sport Exhaust in its quiet setting and set the cruise at 75 mph. Only blind-spot warning and a forward collision avoidance system are equipped to this 911. With no adaptive cruise or lane-keeping system nudging the car around (these are optional), it’s all driver on the highway. While an advanced lane-centering program would make this drive all that much easier, being “forced” to pilot a Porsche 911 isn’t all that bad. 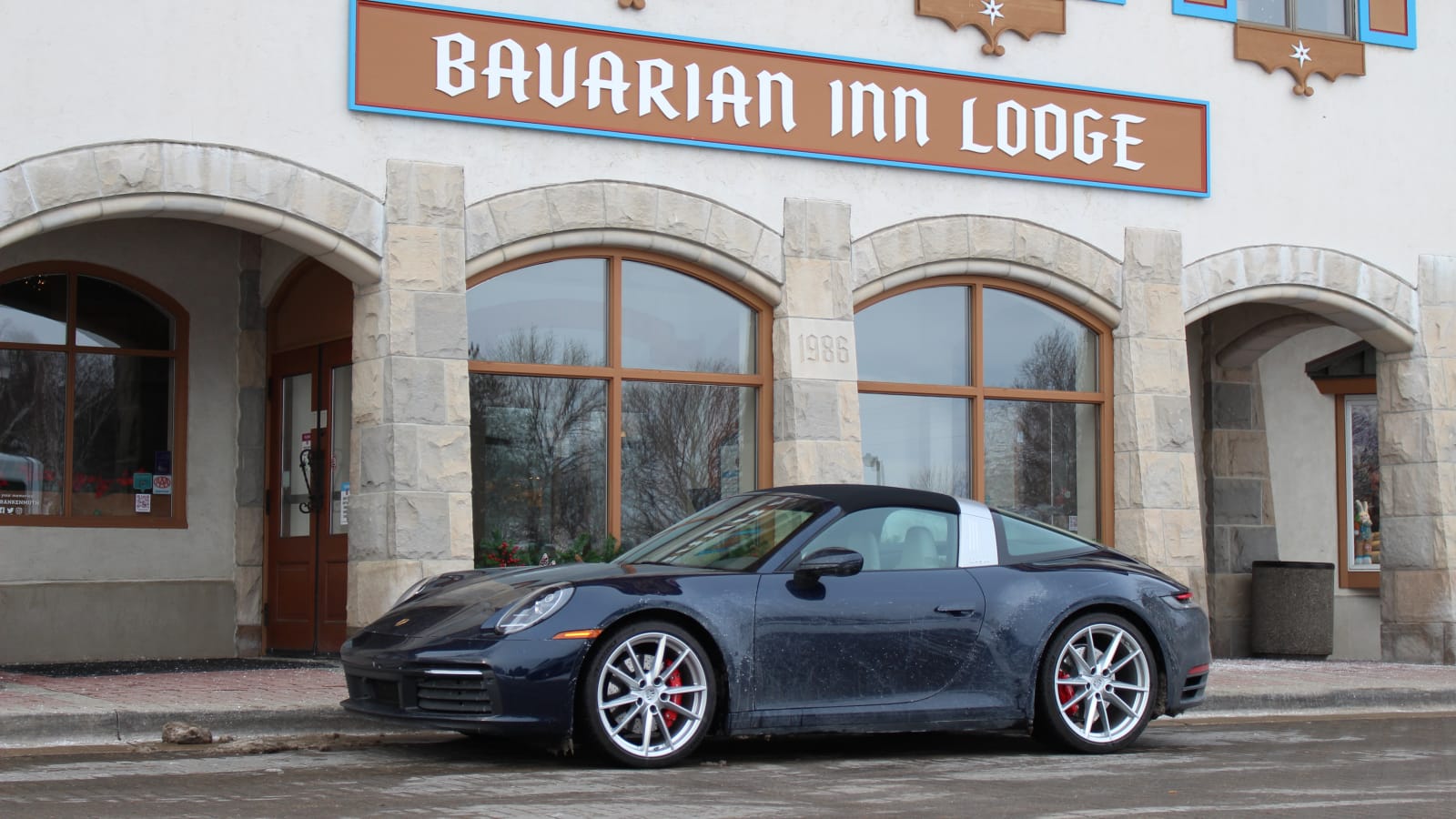 A longer highway journey highlights the 911’s GT leanings. The adaptive suspension smooths out bumps extraordinarily well. Road and wind noise is more apparent than in a hardtop, but it’s downright quiet for a car with a removable roof. You’ll hear the flat-six growling away should you lean into the throttle to pass, but it remains unobtrusive otherwise. There isn’t a hint of tramlining or indecisiveness from the wide rubber. Even the Bose audio system sounds good, though at $1,600 extra, it should. The 90-mile journey saw the fuel economy trip gauge finish at 26 mpg, beating the highway rating by 3 mpg.

We exit the highway to snow and ice-covered country roads. Gusty winds had blown the snow onto the road earlier in the day, causing a great deal of ice to form. This winter-tire-shod 911 doesn’t falter.

Its real winter test was already behind it from earlier in the week when about 4 inches of snow fell in a single afternoon and evening. Empty parking lots were made into snownut playgrounds. Winter might suck most of the time, but it’s all worth it when you’re sliding around in the fluffy stuff in an all-wheel-drive 911 equipped with winter tires. Just put stability and traction control into its relaxed state, then enjoy the tail-happy fun that ensues. Testing out the 911’s dynamics and abilities in snow perfectly highlights how well Porsche has engineered out the inherent rear-engine weight balance issue. You can drift in circles till the fuel gauge is at empty with all the ease and simplicity of any other car twisting about in the snow. Power is largely sent rearward (where it should be), but if traction is needed and asked for, it can transfer as much as 50% of torque to the front axle. 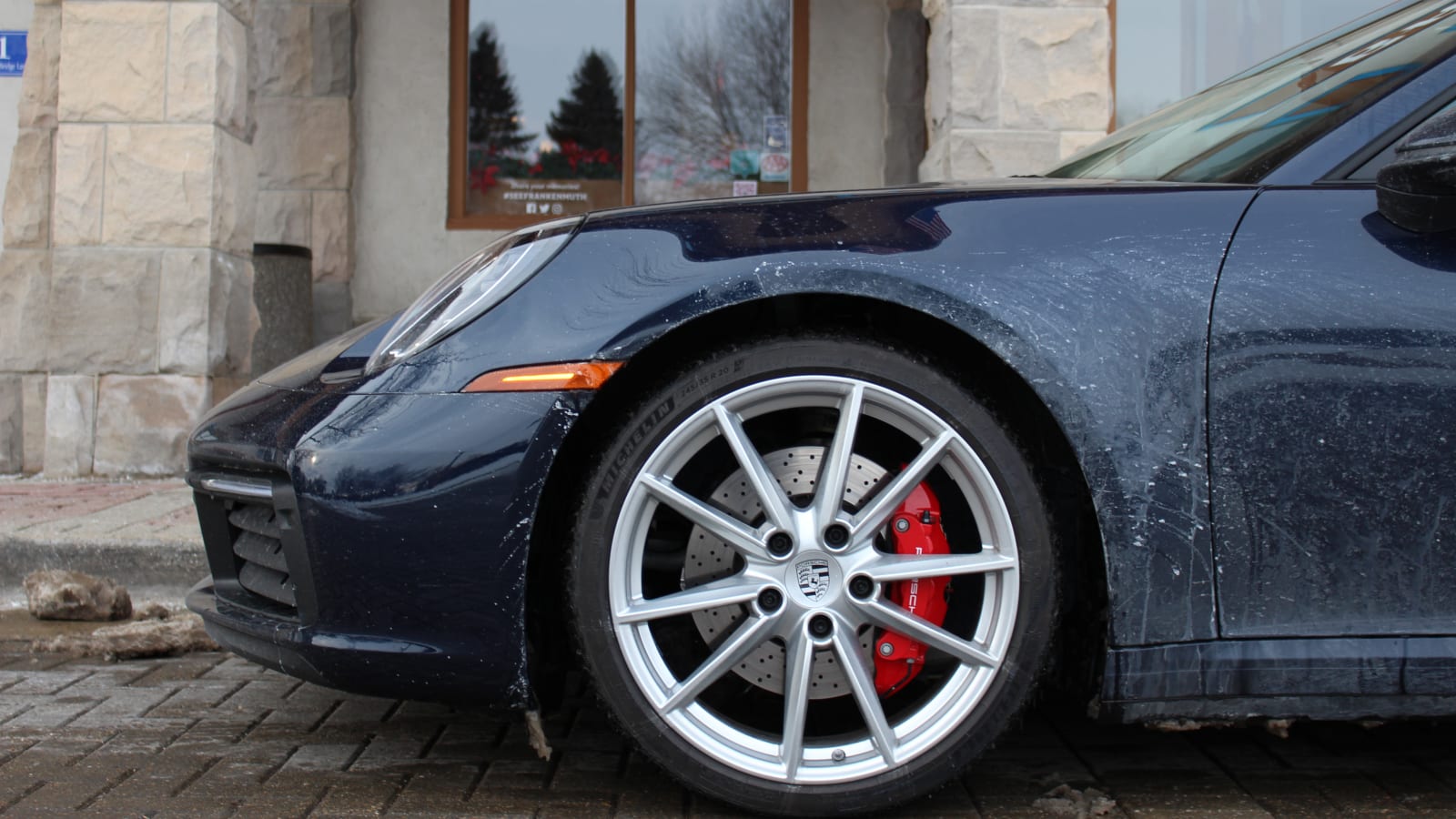 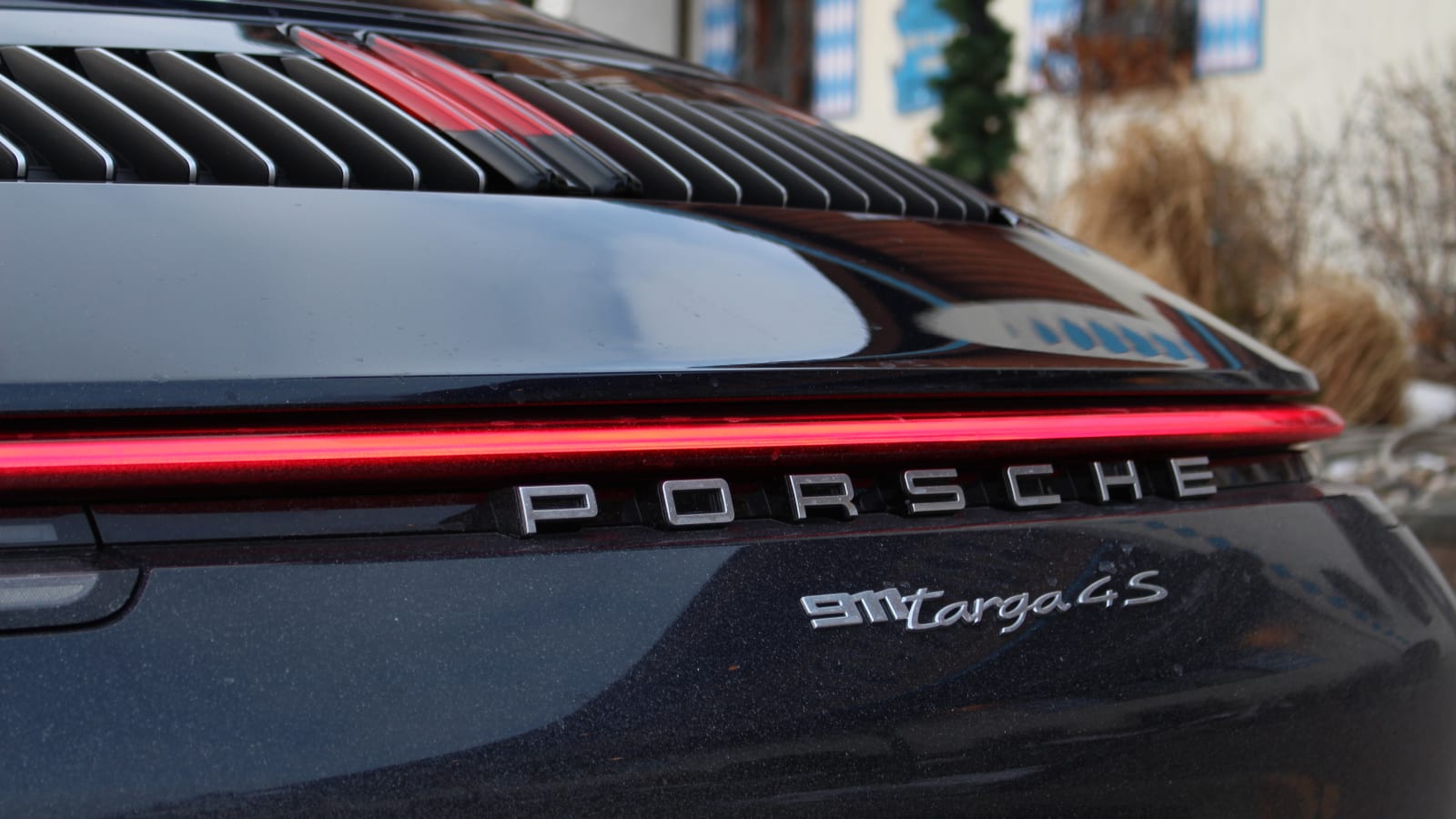 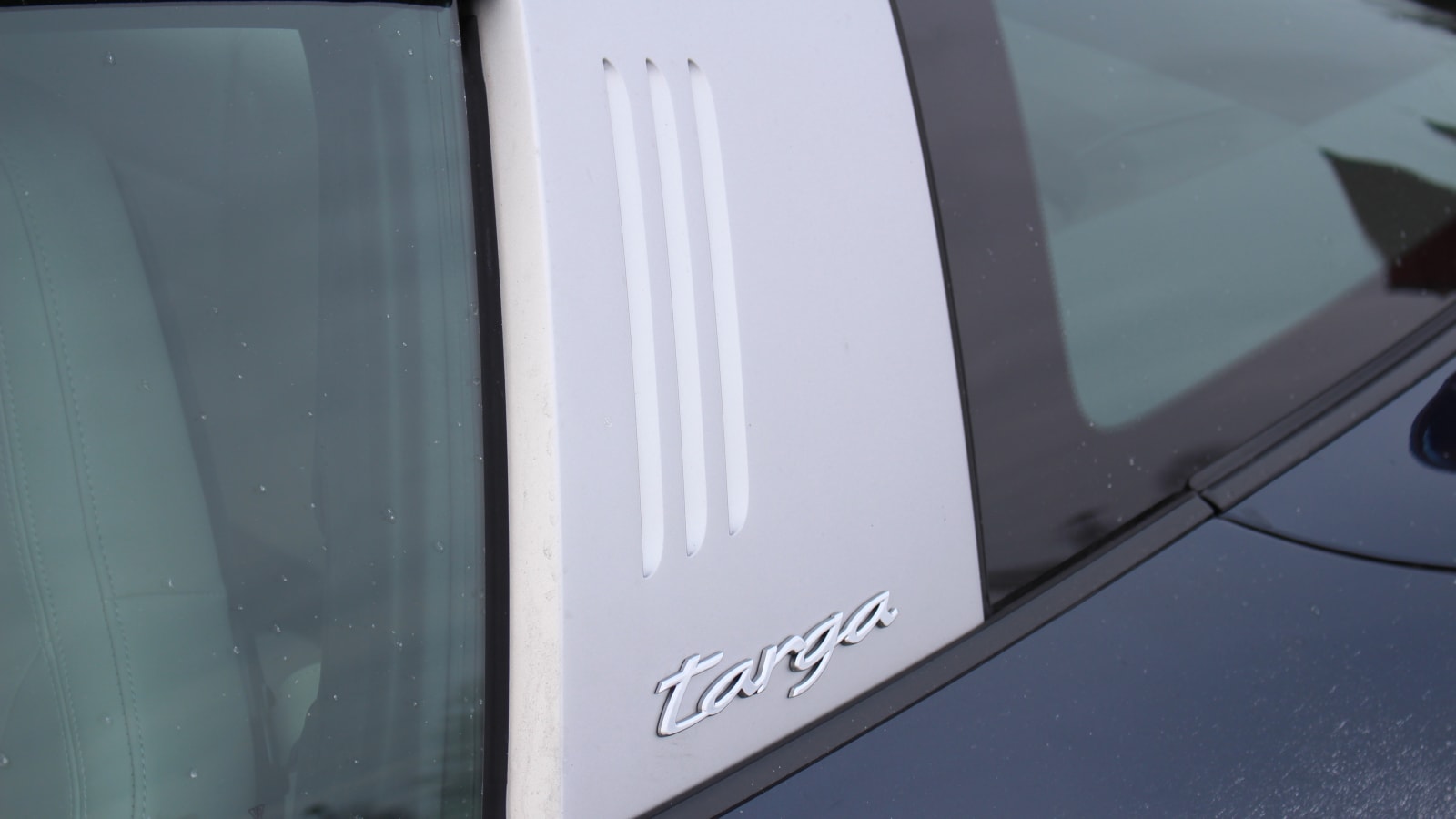 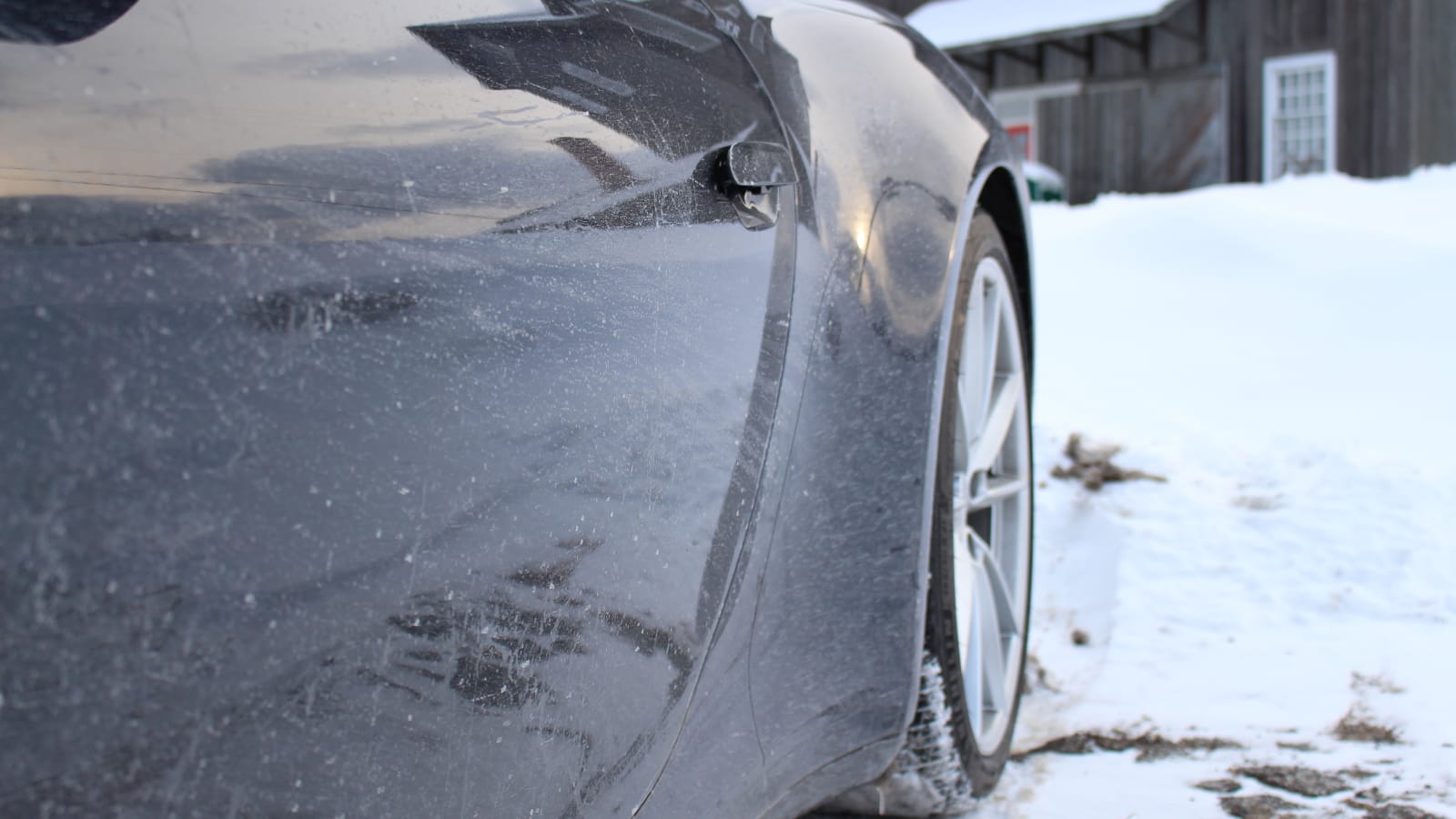 No such theatrics thankfully occur as we bumble and crackle our way into Frankenmuth’s salt-covered roadways. The nose-lift system is deployed for the Holz-Brücke bridge, a location then saved via Porsche’s new-for-2021 GPS-enabled nose-lift memory feature (the Corvette has a similar feature). Finally, it’s time to get out and breathe in the mini-Bavaria that surrounds.

More than a few Frankenmuth visitors approach while I take photos to ask what the hell I’m doing with this gorgeous Porsche in this completely crap weather. The car is covered in a mid-western Jackson Pollock: salt, dirt and road grime. The silver Targa bar sticks out from the dark blue paint with authority, shining bright in the winter gray that so envelops this part of the country in winter. It intrigues with subtle and distinctive beauty, the Porsche way.

Photoshoot complete, I move onto the most important part of this trip: acquisition of the chicken. It’s not the straight-outta-Stuttgart storybook ending you might expect from this German town, but the chicken from either Bavarian Inn or Zehnder’s is what Frankenmuth is most famous for these days. With the towering and numerous boxes of takeout nestled and secured into the two rear seats — you can’t do that in a Corvette — the journey back home begins. 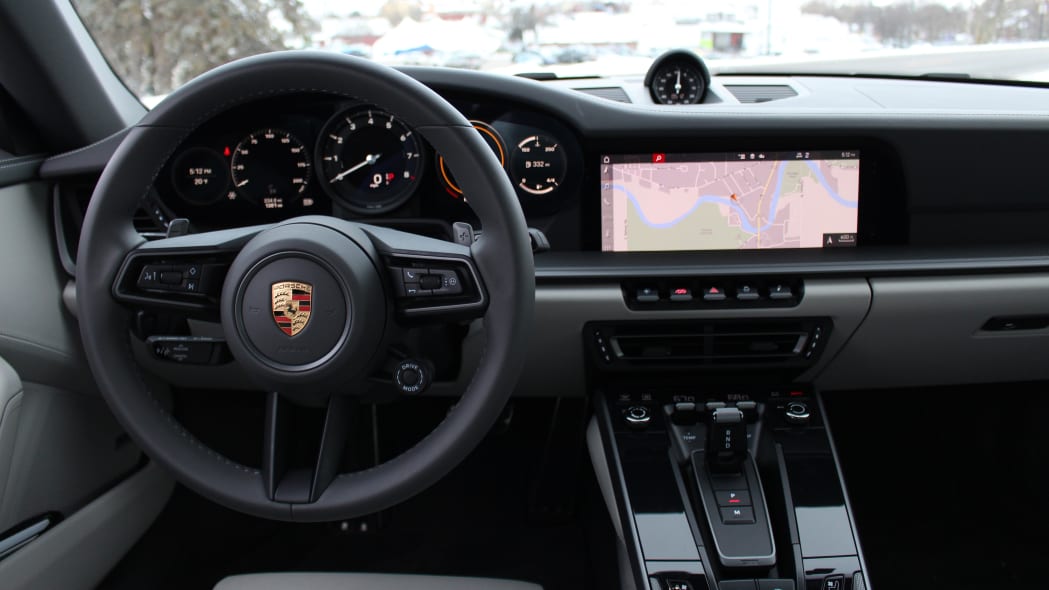 It gets dark on the way back, but like everything else in a 911, the headlights are top-notch. An auto-dimming rearview mirror and dimming side mirrors (on both sides!) keep the giant trucks and SUVs with their light-of-a-thousand-suns LED headlights from blinding me. The cabin is peaceful enough and seats comfy enough that my girlfriend even takes a nap on the way back.

The next day I ventured out to my favorite driving roads to remind myself of the beast that lurks within the 911 Targa 4S. It’s every bit the driving masterclass I described it as in my first drive of the Targa.

Steering? Telepathic. Brakes? A dream. Handling? Unflappable. And so it goes on. Porsche even seems to have resolved whatever metallic ringing was intruding into the cabin on my Euro-spec test car from last summer. The only sounds you hear now consist of the good stuff: Boost building, flat-six burbly screams, exhaust histrionics and blow-off valve noises. It’s all a touch rawer and noisier than a Coupe due to the openness of the cabin and roof style.

Once again, the 992 Porsche 911 proves itself as the Swiss Army knife of cars. The Targa 4S is a worthy candidate as the most versatile of all 911s, though. You can drive two hours in total luxury to pick up a small army’s worth of chicken, tear up the local backroads on your way and get a tan at the same time. Pay no mind to your location or state of season. 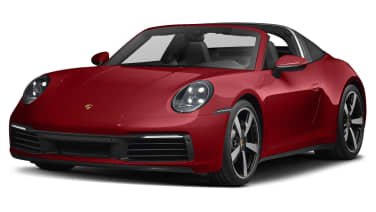 $634 - $3,486 Nat'l avg. savings off MSRP
See Local Pricing
I'm not in the market for a vehicle at this time. Please move this suggestion to the side for 30 days.
Huge Savings