Everything from $44 budget solutions to $278 premium detectors

As you might expect, here at Autoblog, we're unequivocally against breaking the law. While driving on public roads, it's essential that we all obey the posted speed limits and road rules. That said, no one is perfect, and if you'd like to potentially save yourself from a speeding ticket for a stupid mistake, you might be interested in picking up a radar detector. If you're in the market for one, check out this list of the six best-selling radar detectors on Amazon. 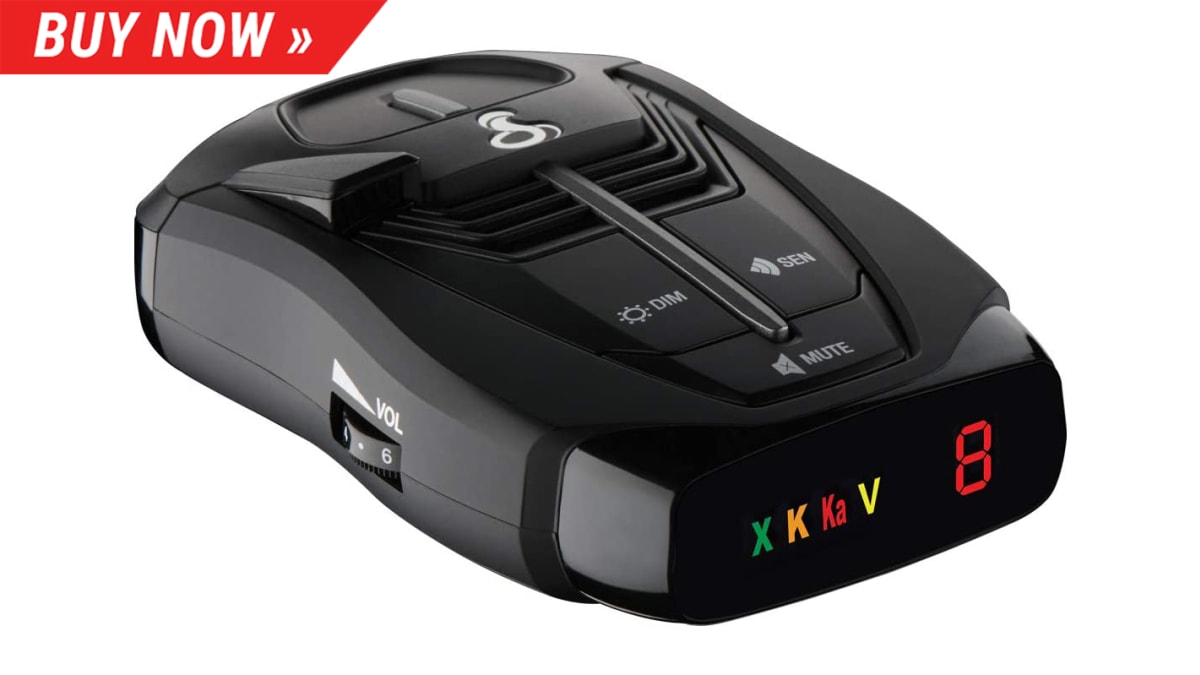 The Cobra RAD380 features front and rear detection by way of Cobra's LaserEye technology, providing "all around protection."  It has an "updatable IVT Filter and advanced anti-falsing circuitry intelligently," which helps to reduce the amount of false alerts you receive. This radar detector also promises long-range detection and fast processing meant to make the driver aware of a signal before it's too late. The RAD380 has 5,659 ratings on Amazon and a total score of 4.4 out of 5 stars. Amazon reviewer Brana had this to say in their five-star review:

"I bought this item [as] a gift for my boyfriend and he loves it! It’s super simple to use and surprisingly accurate. There are a couple false alarms here and there, but we are satisfied with the purchase overall. No sense in spending tons of money on a scanner, unless you are looking for a specific feature."

Want to learn more about this scanner? Check it out here. 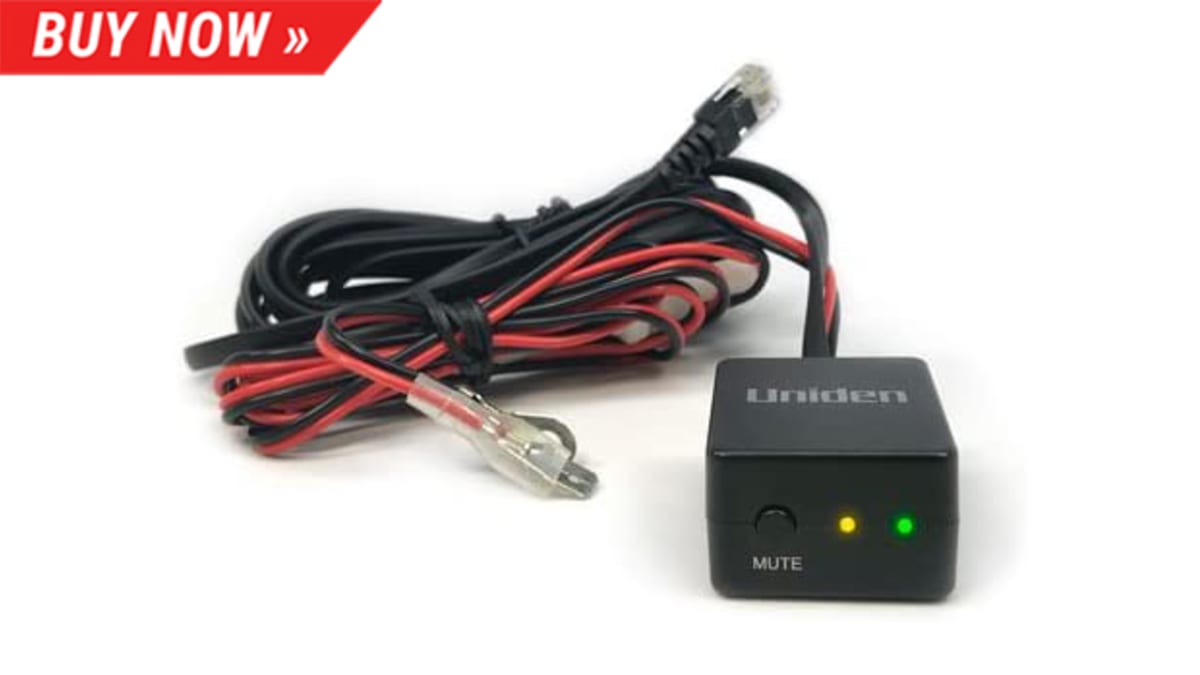 Here we have an easy-to-install hardwire kit w/ mute button that's compatible with Uniden R7 R3 R1 DFR9 DFR8 DFR7 and DFR6 radar detectors. Clearly, this product won't be able to be used by everyone, but it's used by enough people to end up as the fifth best-selling product in Amazon's radar detector category. The product currently has 617 Amazon ratings with a cumulative score of 4.6 out of 5 stars. Reviewer Lewis had this to say about the kit in his five-star review:

"I wanted a hardwire kit for my Uniden R3 because I was tired of having the power plug cord dangling from the windshield and getting in the way. (Why else, right?) I decided to go with the Uniden Kit because it has a silence button, making it convenient to mute the unit when necessary. Installation is relatively easy, especially if you have a fuse box near the driver's side dashboard by the A-pillar, like on my Sierra. I just slid the flat telephone wire type cord under the ceiling and door trim, using a plastic panel tool to the fuse box. If you purchase a tap wire setup for your type of fuse you just find a switched circuit fuse, pull it, plug in the tap, replace the fuse in the bottom slot of the tap, and your radar detector fuse in the top slot of the tap, and connect it to the red wire on the kit. Connect the black wire to any good ground screw, bolt or nut and you're done. I used the velcro that came with the unit and located the button box on the side of the console by the leg well where it is easy to reach and discrete. The unit works well and I am happy with the purchase and would recommend it to a friend."

Been thinking about hardwiring your Uniden radar detector? Learn more about this potential solution right here. 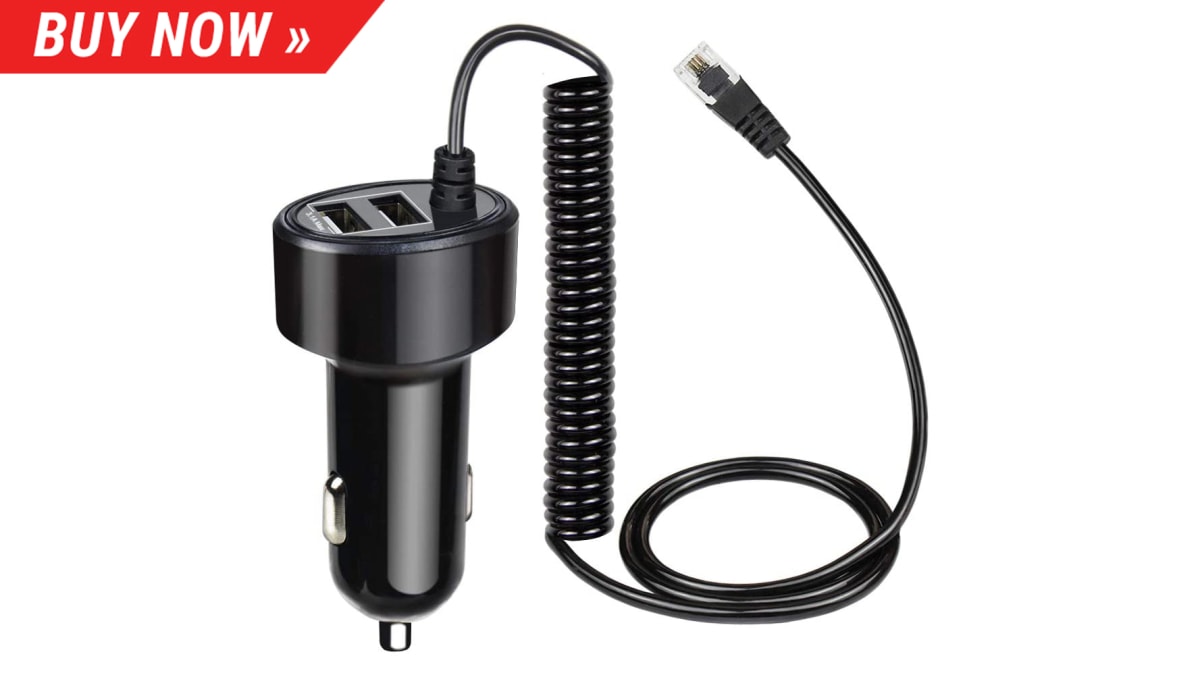 This is another radar detector accessory, rather than an actual detector, but it's an essential one. This cigarette lighter power cord is compatible with radar detectors from Beltronics, Escort Passport, Uniden, and more. It's a 6-foot coiled cord, but be aware it's not a "smart" cord. It does, however, have two USB ports that you can use to charge mobile devices while still powering the radar detector. The cord is super affordable as-is at less than 20 bucks, but it also comes with a one year warranty. With 563 ratings it's sitting at an overall 4.4 out of 5 star rating. Amazon reviewer T.M had this to say in their five-star review:

"[This was a] perfect fit for [my] Escort Passport 8500. We needed a replacement cord after 10 years and this arrived quickly and works great! [It's a] snug fit and actually, [I] think it’s better than the original. It also has two USB outlets."

Need a new power cord for your radar detector? Check this one out right here. 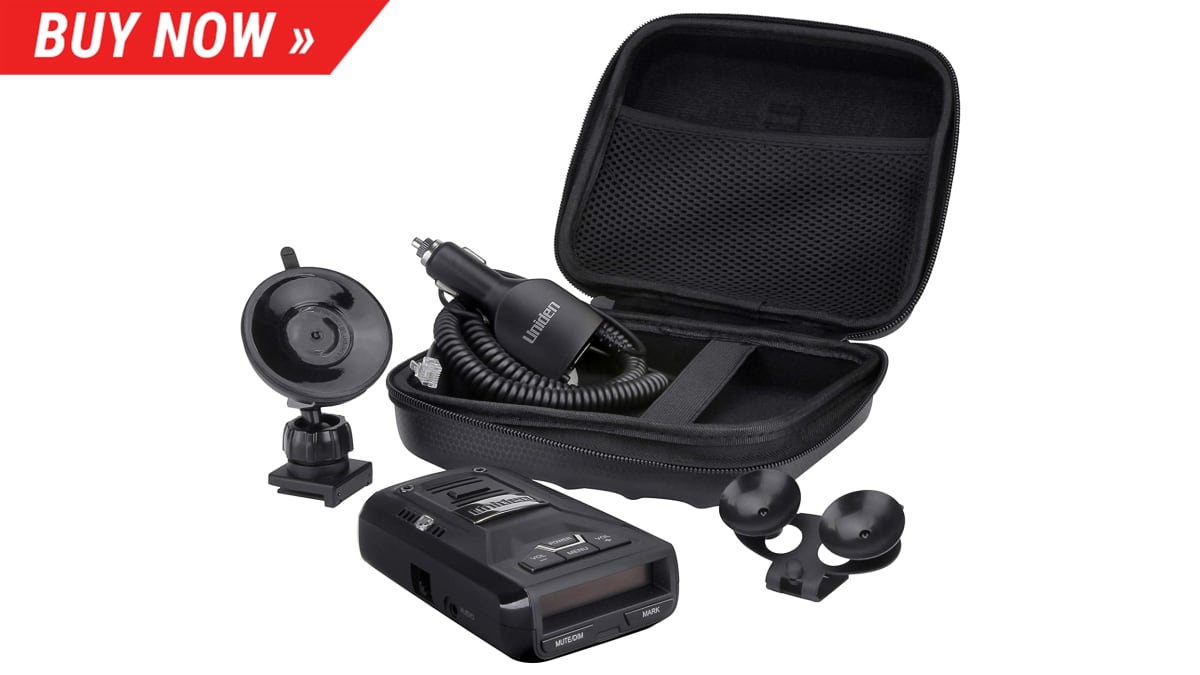 This kit is the most expensive on our list, but it should have everything you need. The scanner features "advanced false alert filtering" as well as smart GPS technology so the scanner can "remember and mute common false alerts (such as retail store automatic doors) along your regularly driven routes so you never have to listen to the same false alert twice." It also has red light and speed camera alerts, programmable voice warnings, and a multi-color OLED display. This scanner has 3,376 ratings on Amazon right now with a score of 4.6 out of 5 stars. Reviewer JaxFL gave the R3 some high praise in their five-star review:

"After reading reviews and watching videos of trusted reviewers, I decided to upgrade one of my older radar detectors, mainly because of all the false alarms. My previous detector was GPS enabled and could lock-out known fixed false signals but couldn't do anything with the false signals caused by newer vehicles with radar-equipped systems built-in for safety ... I could mute them, but it was very annoying to say the least ... I'm a seasoned radar detector user since I was old enough to drive. The range of this detector is awesome and definitely one of the best, if not the best on the market. It recognizes false alarms like no other. It exceeded my expectations in this manner.

... It can show your current speed and which bandwidth it is detecting, along with [the] strength of [the] signal. You can mute [the] sound of [the] signal with [the] mute button on the end of [the] plug or lockout the signal for known false alarms. It will remember those locked out and not sound them off next time. Once set up with your options, it is a dream. I set mine to not sound an audible alarm if I'm driving under 45mph but it will show visually. Also, I have it mute the audible alarm at higher speeds after a few seconds so I'm alerted but not annoyed and I don't have to press mute .. You can also set it [to play] different sounds for different bands. In my area, ka band is prevalent along with k band ... The mounting bracket is also awesome. I was able to mount the bracket/suction cup behind my rearview mirror and only have the detector showing just below the mirror ...The price of this detector is a steal compared to some of its competition at twice the price. I did a lot of research before I purchased and this fit the bill and exceeded my expectations. I highly recommend this to anyone other than those willing to spend thousands for built-in protection. You won't regret it."

Interested in the Uniden R3? Learn more about the product right here. 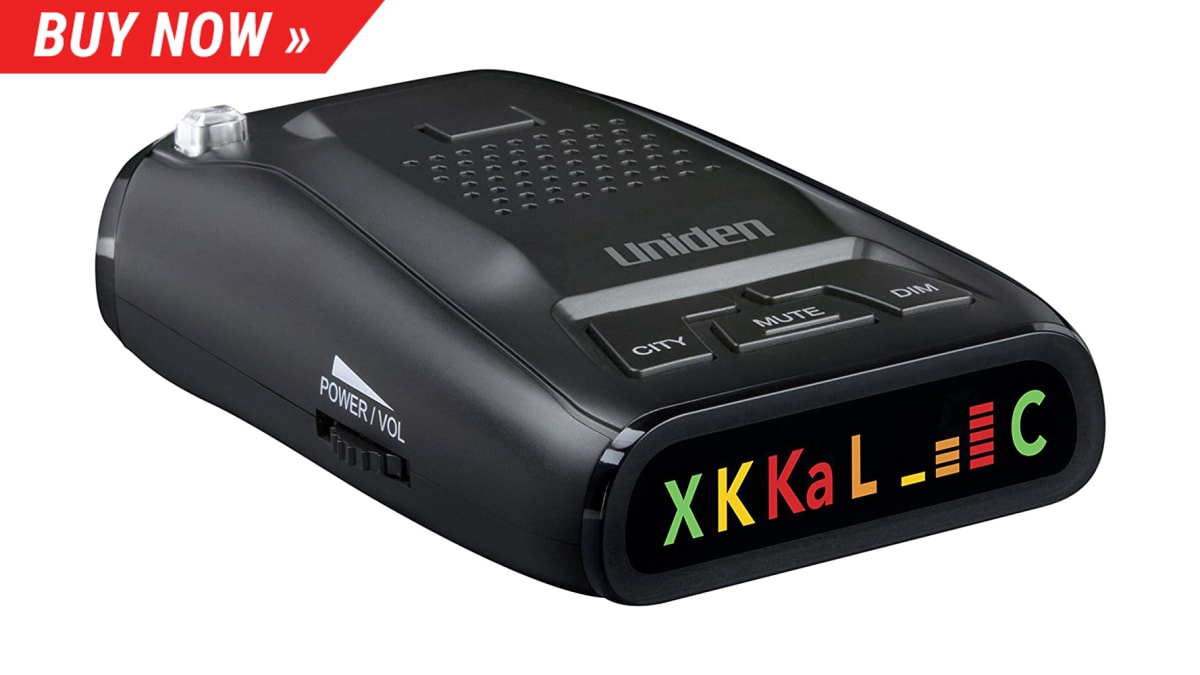 The second best-selling radar detector on Amazon is the Uniden DFR1. This radar detector features 360° protection, different modes to improve usability in highway or city environments, and a memory feature, allowing it to remember its last settings even after being powered down. It comes with a "12V DC vehicle power cord, dual suction cup windshield mount, hook and loop fastener tape, and a spare fuse for [the] 12v power cord." The DFR1 has nearly 2,000 Amazon ratings and an overall score of 4.3 out of 5 stars. Amazon reviewer metalman488 said this about the DFR1 in his five-star review:

"When I first bought this detector I was a little concerned because it was so cheap compared to other detectors and I thought that meant that it either wouldn't work or wouldn't work well enough to matter. Well, I've been using it for a while, driving to work and even on a vacation, and I have come to the conclusion that it works fine and it is definitely worth the money. I do have to leave city mode on because my car apparently uses the x band for lane assist or whatever, but most of the officers in my area, and the state troopers on my vacation, seem to be using the k and ka bands so city mode is fine. It's also plenty loud. I can still hear it with my radio's volume and bass cranked way up. I do get weird k/ka readings in places where there aren't any cops, unless their radar signal is bouncing off from really far away. These false(?) readings happen sporadically, so I'm thinking maybe some other brands of cars use the k/ka band for lane assist or something ... Anyway, the detector has given me a fairly decent amount of warning before a cop depending on the cars in front of me. I haven't been pulled over or anything since I got it, and it has definitely helped me find some sneaky cops that had really good hiding places ... If you have a newer/luxury car you might try to check what band things like lane assist and adaptive cruise control use on your car. If they use the x band, you can just leave city mode on and it should be fine (unless cops in your area still use x band), but if your car uses the k/ka bands you might have an issue [because] I don't think you can disable those bands, and even if you could, the k/ka bands are the most commonly used bands by the cops ... In conclusion, it's an excellent little detector for the money and I would definitely recommend it to anyone looking for a cheap and functional radar detector."

Looking for a solid detector at an awesome price? Learn more about this one right here. 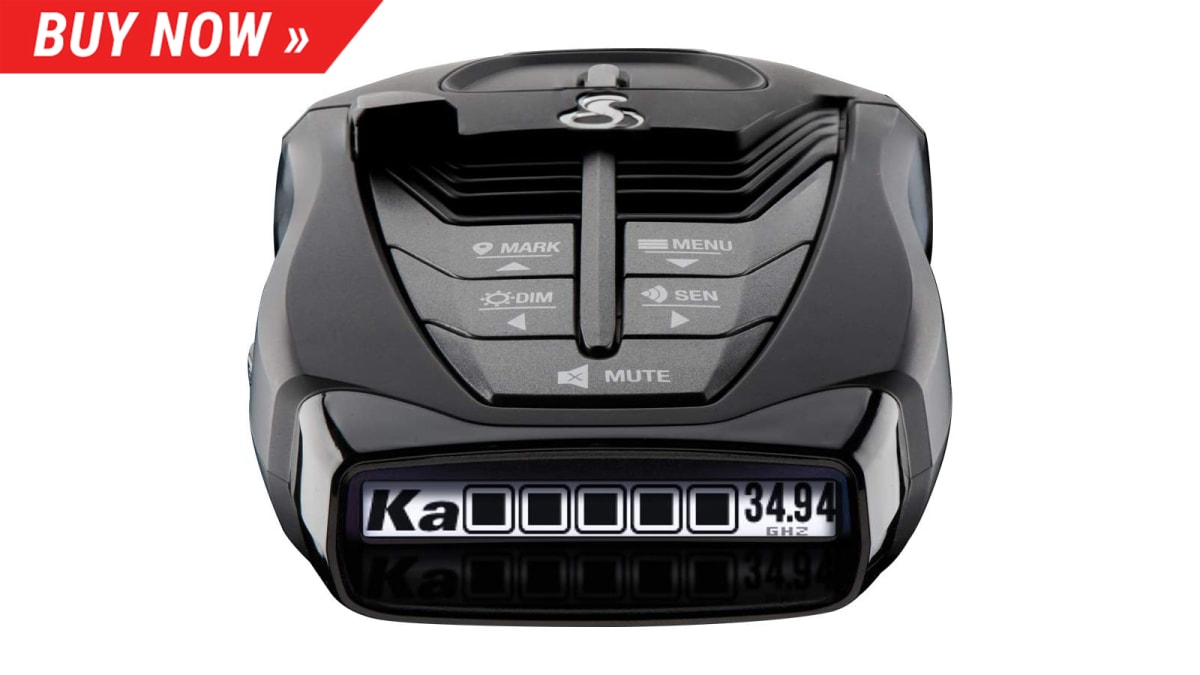 Last but not least, the best-selling radar detector on Amazon is the Cobra RAD 480i. The RAD 480i features front and rear radar detection, long-range detection, early warnings, and it can even be used with the downloadable iRadar app. It comes with a "12V vehicle power cord, suction cup car windshield mount, and a hook and loop fastener for dash mounting." This detector has 5,659 ratings with a cumulative 4.4 out of 5 star score. Reviewer Ryan said this about the product in his five-star review:

"First off, this is my first radar detector. I was getting all kinds of false readings at first until I dialed in my detector ... I realized my town only uses KA band, because it is a higher frequency and more compact (takes up less windshield space for police). Second, a lot of newer cars use Ka band for their fancy proximity alert features. Usually, when detected on the radar, they have a low reading. I noticed when I encounter police cars, the KA band goes straight to five bars, so I set my sensitivity to low and only on KA band. Once you do this, [your] detector will be flawless. However, you will be deceived multiple times if you do not do this."

Want to learn more about the best-selling radar detector on Amazon? You can do that right here.