It's been in continuous production since 1977

Motorists who complain that the Toyota Land Cruiser is past its prime need to sail across the Bering Strait and hop behind the wheel of a 2021 Lada Niva. Introduced in 1977, it has been in continuous production since without receiving major updates. It white-knuckled into the 2020s, but its successor is on deck for a 2024 launch.

One of the four new cars Lada plans to introduce in its home country of Russia by 2025 is the second-generation Niva. It will carry the nameplate forward, and a sketch of a concept that previews the model suggests that several of the styling cues that continue to characterize the original (like an upright front end with turn signals positioned above the headlights and wheels pushed out to the corners of the body) will be found on its replacement. Two variants will be offered: a compact SUV, probably with two doors, and a medium-sized four-door model.

Lada won't risk alienating the Niva's target audience by making a significant push upmarket. The next-generation model will continue to offer four-wheel-drive, a relatively basic and hard-wearing interior, plus the kind of off-road capability that can make a mountain goat do a double-take. It's a tool above all, not a fashion statement. 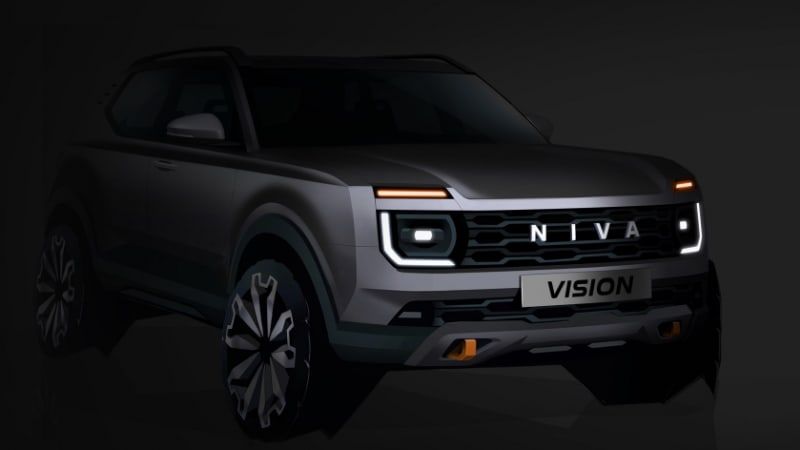 Renault controls Lada, and it recently merged the firm with its Dacia division to leverage the benefits of economies of scale. Executives confirmed the next Niva will ride on the CMF-B platform that currently underpins the fifth-generation Renault Clio and the second-generation Nissan Juke, among others. Powertrain specifications remain under wraps, but whatever powers the SUV will undoubtedly come from Renault's parts bin.

Sales are expected to begin in 2024, though Lada will unveil the Niva Vision concept shown above in 2021. We'll have a much better idea of what the next Niva will look like when we see the design study in the metal. There's a lot riding on the model: It will help the company expand its presence outside of Russia in the 2020s.

"These products will have a space beyond the Russian market, as they’ve always had. So, besides the complete renewal of the mainstream range, the relaunch of the Niva will enable the complete repositioning of Lada as a brand," the company said in a statement. We don't know if America is on its radar, however.

Until then, the current Niva (shown below) will soldier on in the handful of countries it's still sold in. It received several improvements (including more comfortable front seats and headrests for the rear bench) in 2020, and 2021 brought more sound-deadening material. Now known as the Niva Legend, and available with two or four doors, it's even offered with a Comfort package that bundles remote keyless entry, an alarm, and a head unit with USB and AUX inputs.

Both body styles are powered by a 1.7-liter four-cylinder engine, which sends 83 horsepower and 95 pound-feet of torque to the four wheels via a five-speed manual transmission. It wafts its way to 62 mph in 17 seconds, and it eventually reaches 88 mph. Outdated? Sure, on paper, but its off-road prowess is difficult to beat and timeless.

As a side note, the team that developed the Niva in the middle of the 1970s was asked to create "a Renault 5 on a Land Rover chassis." Look at it from the side, and the inspiration is clear. In an odd twist of fate, the Renault 5 is also making a comeback during the 2020s. It will return as an electric hatchback with a retro-inspired design.