One of the stranger vehicles that came through the press fleets last year was the 2020 Lincoln Continental Coach Door Edition. And it was strange for a wide array of reasons. It’s an extremely limited-production model; Lincoln only built 150 examples, plus another 80 of the 2019 80th Anniversary Edition that first featured the same rear-hinged doors. It’s also obsolete, since Lincoln ended production of the base Continental last year. And even if Lincoln kept building Continentals, the model was effectively obsolete in a world dominated by crossovers and SUVs. Plus, as we’ll touch on in a bit, its driving dynamics were rather old-school for better and worse. But after spending some time with this odd car, it became clear that Lincoln managed to make something special, and the coach doors shouldn’t die with the Continental.

Before we dig deep into what the car is like and the lesson Lincoln should learn from it, here’s a quick refresher. The rear-hinged Continental started with the 2019 80th Anniversary Edition as a run of 80 cars, followed by the 2020 Coach Door Edition. To give it the fancy doors, as well as the extra length they required, Lincoln partnered with Cabot Coach Builders in Massachusetts. They took a Black Label model with the twin-turbocharged 3.0-liter V6, made the body modifications, and also added a few custom interior touches. Besides those changes, it’s just like any other Continental Black Label. Well that, and it costs nearly $40,000 more. 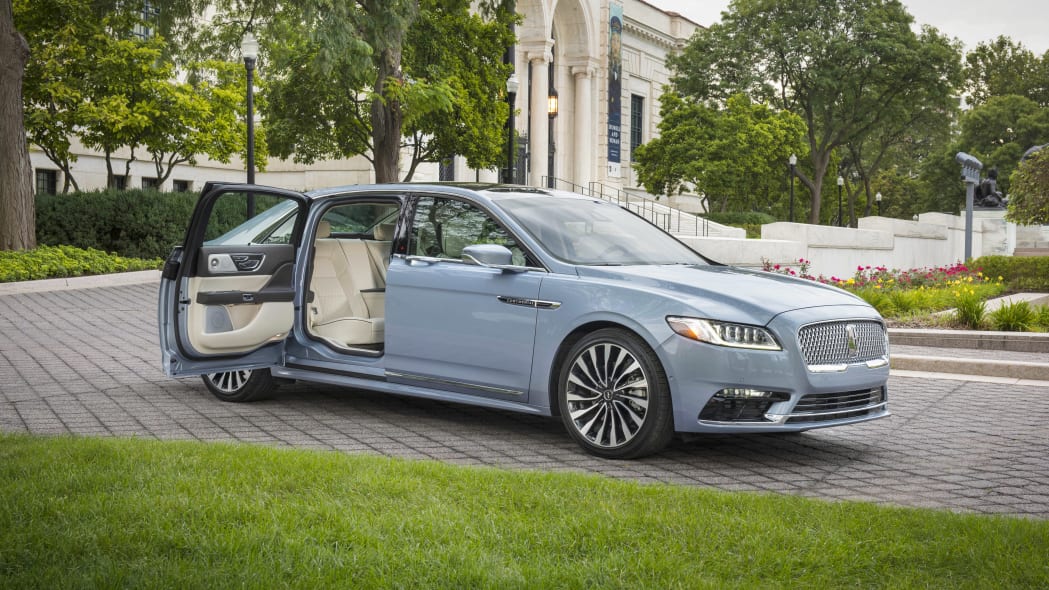 Since nothing really changes mechanically, there’s nothing about the Coach Door Edition’s driving experience that sets it apart from a similarly equipped Black Label. The 400-horsepower twin-turbo V6 pulls hard all through the rev band and with no waiting. It’s a bit coarse for a luxury car engine, but the performance makes up for it. The relatively old six-speed automatic is quite smooth, though shifts are slow. Ride and handling change quite a bit depending on whether you’re in the normal comfort mode or sport mode. Comfort mode does a great impression of the floaty, bobbing land yachts of the past, which is accompanied by quite a bit of body roll. Pop it into sport mode, and the body roll is significantly reduced, the steering weights up, and control is massively improved. It almost feels nimble. But the ride becomes stiff and bumpy, not something befitting a mini limo. So it’s a mixed bag.

The interior is more consistent, and mostly for the better. Lincoln uses plenty of nice leather throughout the cabin; on the seats, the dash and the doors. Warm wood trim is on display, too. There aren’t many fancy gimmicks like you’ll find on a similarly sized and priced Mercedes or Audi, though. No wild ambient lighting. No decadent infotainment screens or rear leg rests. Front passengers do get 30-way power seat adjustments, though, and rear passengers have access to climate and radio controls, recline functions and a console with room for tablets and a champagne holder. OK, so that's pretty decadent.

In keeping with the theme, the Continental Coach Door is, 95% of the time, just a fancier Black Label, and only by so much. That makes it hard to justify the six-figure price. But that final 5% represents all the times you interact with the rear-hinged doors. And doing that is something special you can’t experience on anything new besides modern Rolls-Royces. It harkens back to Lincoln's glory days and the iconic, mid-century Continental. If you were to show up at some sort of fancy hotel or gala, and your driver let you out, everyone would turn to see who you were. And they’ve been so superbly integrated into the design of the Continental that it looks like all of them should be this way.

Come to think of it, every Continental should have had these doors. Maybe it wouldn't have been enough to move the sales needle in a meaningful way, but it would have at least given Lincoln a unique halo product to bring people into showrooms. And while we're at it, Lincoln needs to find a way to bring coach doors to other models. The brand’s SUVs, particularly the Navigator and Aviator, are substantially more impressive than the Continental was. They have beautiful, more distinctive interiors and an overall grander presence that would naturally complement the grand entry offered by the custom doors. It would also represent yet another above-and-beyond element for Lincoln to entice potential buyers away from BMWs and Mercedes. Importantly, it would raise Lincoln's brand awareness even further.

Inevitably, the Lincoln Continental Coach Door Edition will be remembered as a fascinating footnote of car history. It's an example of what might've been for the short-lived reborn Continental — and what could yet be for future Lincolns. While it might not be an amazing car, it's inspiration for how to make the brand even more distinctive and desirable.