Taking a turn in the TC America race car THERMAL, Calif. — Honda has always done a fantastic job of offering a variety of grades for its ubiquitous everycar, the Civic. There have been fuel-sipping hybrids, sedans for people clueless to the untapped performance potential of their commuters, and sporty Si hot hatches. Having recently sampled both the track weapon Honda Civic Type R and the even more capable 2021 Civic Type R Limited Edition, we wondered if we could climb any higher on the Civic’s performance ladder.

The next rung up, it turns out, is a turnkey TC America race car. Formula 1 and Indy might be the pinnacles of racing, but the cars have little to do with what we can buy. Touring cars, on the other hand, start out on the same assembly lines as what’s in our driveways, cars like the BMW M240i, Hyundai Veloster N, Audi RS3 and Nissan 370Z. That makes the racing a lot more accessible for the average person.

At $89,900, the Civic Type R TC probably isn’t what most people would call accessible, but it’s a small fraction of what it would cost to run even a modest pro campaign. You don't even need a racing license, and for many drivers, cars like this will be their first stints in the world of professional motorsports. And don’t forget, for that price Honda delivers a competition machine that’s been rigorously tested and built to comply with the rules of several touring car series.

As a result, the car proves remarkably easy to drive (though squeezing over the roll cage into the heavily bolstered OMP racing seat is a different story). Once you’re strapped in by the six-point harness, things begin to feel familiar even if they don’t look it. 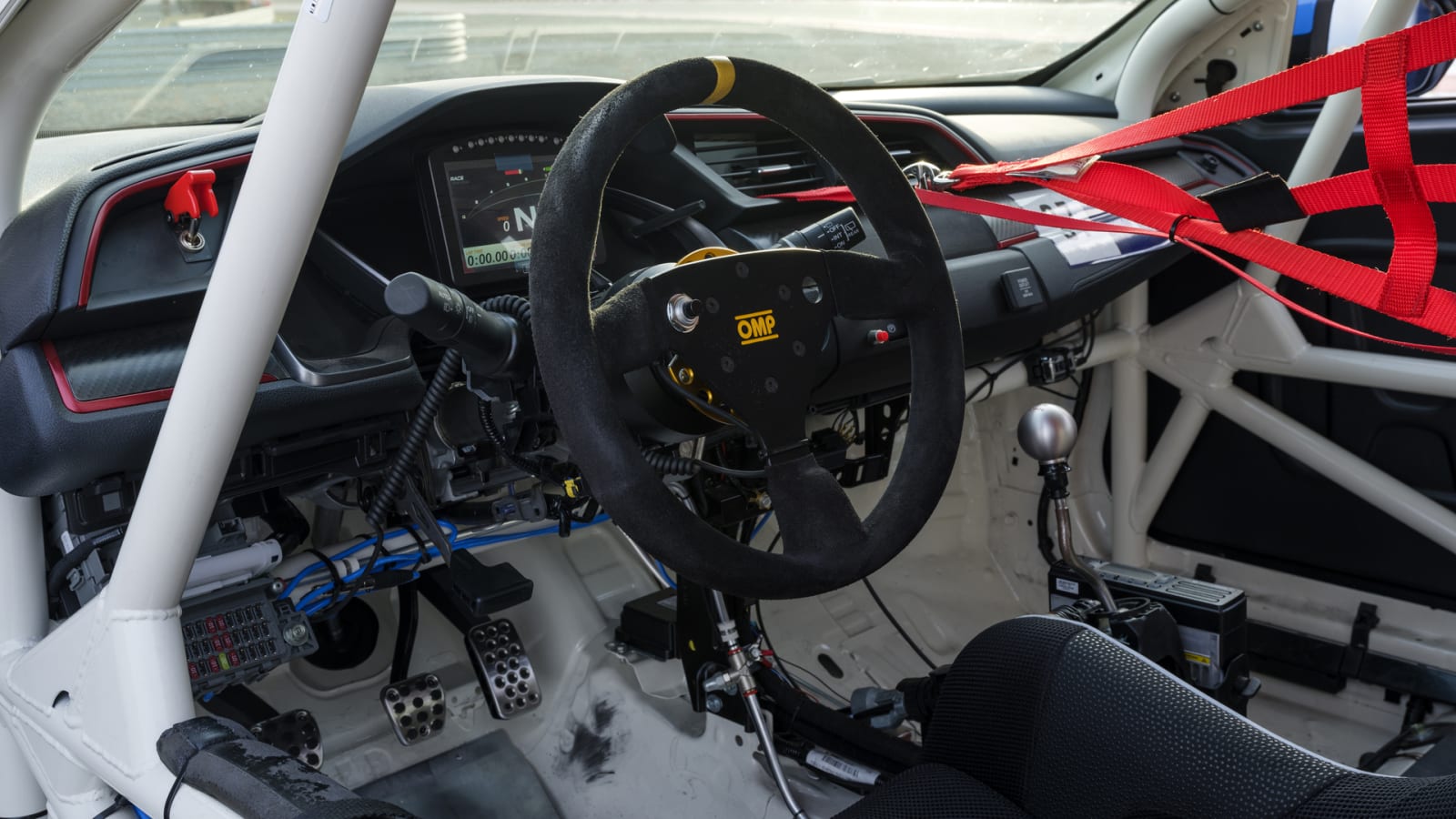 Your right hand falls naturally to the cue-ball shift knob from the 2017–19 Type R, but beyond that is a sea of white paint. Honda gutted 300 pounds of bulk that includes most of the interior and sound-deadening. Or, rather, Honda never added it to begin with, as cars are plucked from the assembly line and delivered as bodies-in-white to Honda Performance Development in southern California for the transformation.

You’re ensconced in a multi-point roll cage and safety netting, and you face the familiar contours of the stock dash, or at least the top half of it. Warning lights illuminate the IP like a Christmas tree due to extraneous sensors being disconnected. You have to ignore all that and instead focus on a MoTec C125 datalogger for all the vitals.

With a tap of the stock Start Engine button the car thunders to life, thanks to the lack of sound insulation and a Borla turbo-back exhaust. The pedals, clutch and flywheel remain stock. So, unlike the shift feel in higher-spec race cars, the TC's remains forgiving and the car could easily be streetable.

The 2.0-liter turbo-four can be tuned from 270 to 330 horsepower depending on the race series. In our case, it retained the stock output of 306 horsepower and 295 lb-ft of torque with some adjustment to the ECU. It’s plenty quick, though the real transformation isn’t in the engine. 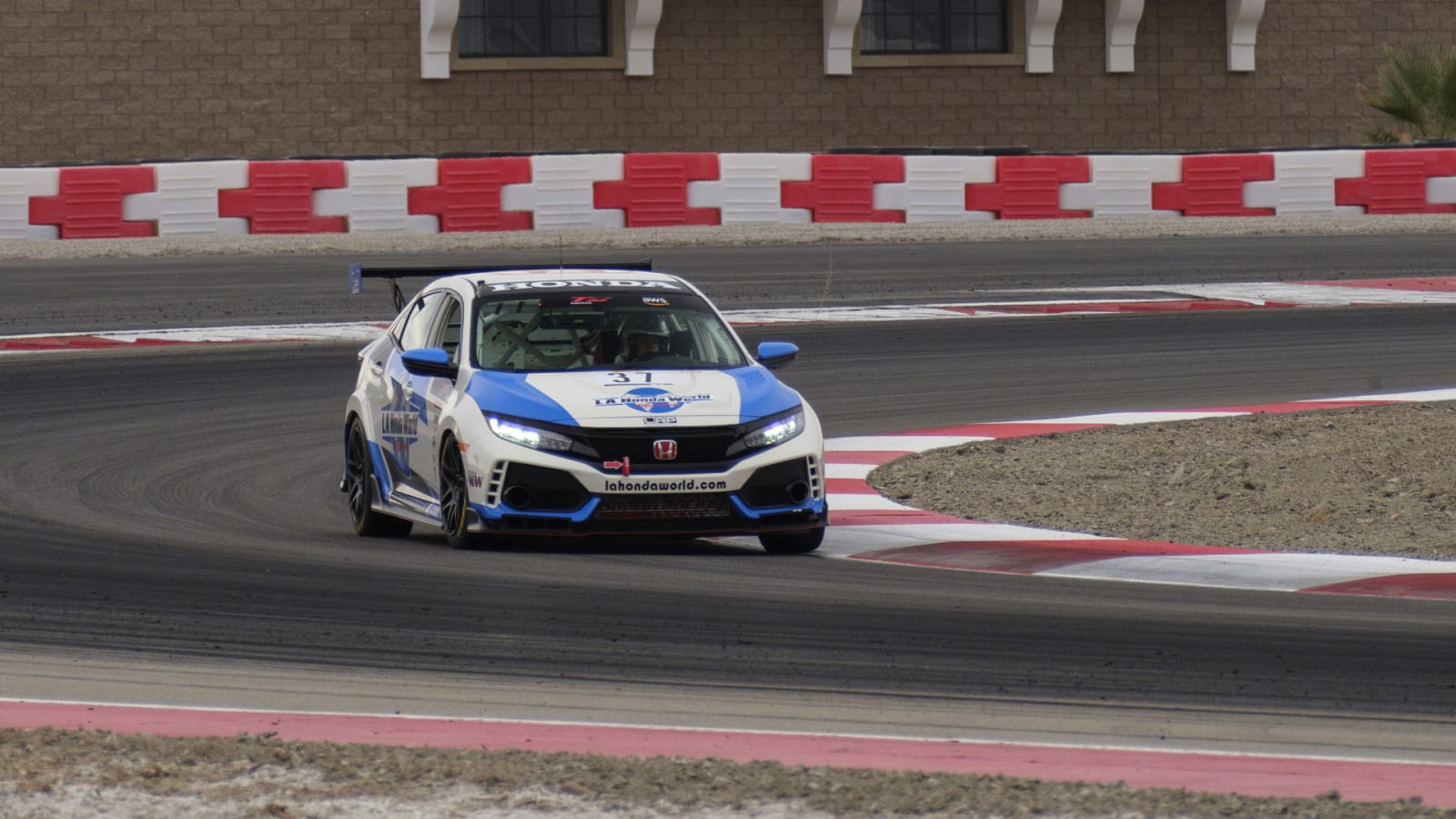 If the 50-pound reduction that Honda gave the Limited Edition is a healthy diet, the TC is an athlete in their prime. It has the essence of the Type R, but every response has been sharpened. A small-diameter steering wheel and racing slicks quicken turn-in to target apexes like a sniper’s bullet. The Cusco limited-slip differential bites with rabid ferocity as you slingshot of a turn, hammer down. At cornering speeds that would have the stock tires howling, the TC stays flat without breaking a sweat and leaves plenty more grip on the table.

The suspension is obviously stiffer. It uses racing springs and dampers, and its rubber bushings have all been replaced with pillow ball mounts. On harder-core race cars, the chassis can be so stiff that a small imperfection on seemingly flat asphalt can upset the entire car. The TC remains surprisingly compliant. It’s controllable, not kidney-jarring.

HPD strengthened the most commonly used gears, third and fourth, but the six-speed is otherwise stock. The race car deactivates factory driver-aids such as rev-matching and stability control, however, and it feels more organic to blip the throttle on your own. ABS remains, albeit with an HPD-upgraded modulator. We didn’t get enough seat time to really test the long-term durability of the brakes, but the four-pot Brembos and racing pads felt firm and dependable.

Improved cooling, a vented hood, and an adjustable rear wing all contribute to the race car’s on-track performance, but perhaps the most impressive thing about the Civic Type R TC is just how easy and intuitive it was to drive. It’s close enough to a street car that, if it were legal, you could even drive it on public roads. It puts newly pro drivers into a car that lets them focus on the task of driving, honing their skills and, hopefully, winning, without throwing them into the deep end. And when they’ve graduated from the TC, Honda has another car that’s another step up on the ladder, the Civic Type R TCR, but that’s a story for another day.

Correction: An earlier version of this story incorrectly said that a racing license was needed to buy the Type R TC. Honda informed us that while this was the case on previous year cars, that requirement has been lifted this year. The text has been edited to reflect this.