It's more than just some body cladding and a rugged name. It's the real lifted wagon deal.

With all due respect to my colleague Zac Palmer and his road test of the regular Volvo V90, taller is better. While I certainly appreciate and applaud Volvo's decision to buck convention and offer a conventional wagon without body cladding and a suspension lift, I would quite happily sign up for both of those things with the 2021 Volvo V90 Cross Country.

Chiefly, I think the Cross Country looks better. Volvo's clean aesthetic is better realized without the V90 Inscription's chrome-clad jewelry around the windows, sills, airdam and grille. Meanwhile, the CC's fender flares give it a wider, more muscular stance; they're just the right size and made of dark plastic to avoid looking tacked-on and cheap. The suspension lift is also aesthetically pleasing, as the added space between tire and fender works well with the V90's elegant, extra-long-roof proportions. To me, the Cross Country doesn't look lifted; the regular V90 looks slammed.

Yet, it actually is lifted. And to an appreciable degree, unlike its Audi A6 Allroad and Mercedes-Benz E 450 All-Terrain competitors. It has 8.3 inches of ground clearance, which is more than most luxury crossovers have and only 0.4 inch short of the Subaru Outback. You can absolutely tell when you climb in, too – there's an SUV-like step in, but you sit lower to the floor as in a car. By contrast, the A6 Allroad and its air suspension can stretch up to 6.7 or 7.3 inches depending on drive mode, but only at speeds up to 21.7 mph, and you have to have the forethought to raise it. Otherwise, the car only has 5.5 inches of clearance. The E 450 All-Terrain is similarly low-riding with 5.75 inches. That's actually lower than the regular V90!

In other words, those rivals really are just wagons with some body cladding and the ability the go on their tippy toes on occasion. Oh, and a marketing-friendly name that dodges the whole unfashionable "wagon" thing. They're phonys. The Cross Country, however, is the real deal. Besides its aesthetic advantages and its ability to better tackle my crazy driveway, the ground clearance and higher ride height are good news for a variety of scenarios: snow-packed parking spot or driveway, California's spoiler-killing drainage ditches, barely paved camp roads, and sure, a light trail or two. It also makes it easier to load things inside, while still maintaining a wagon's low roof (relative an SUV) for loading things on top. 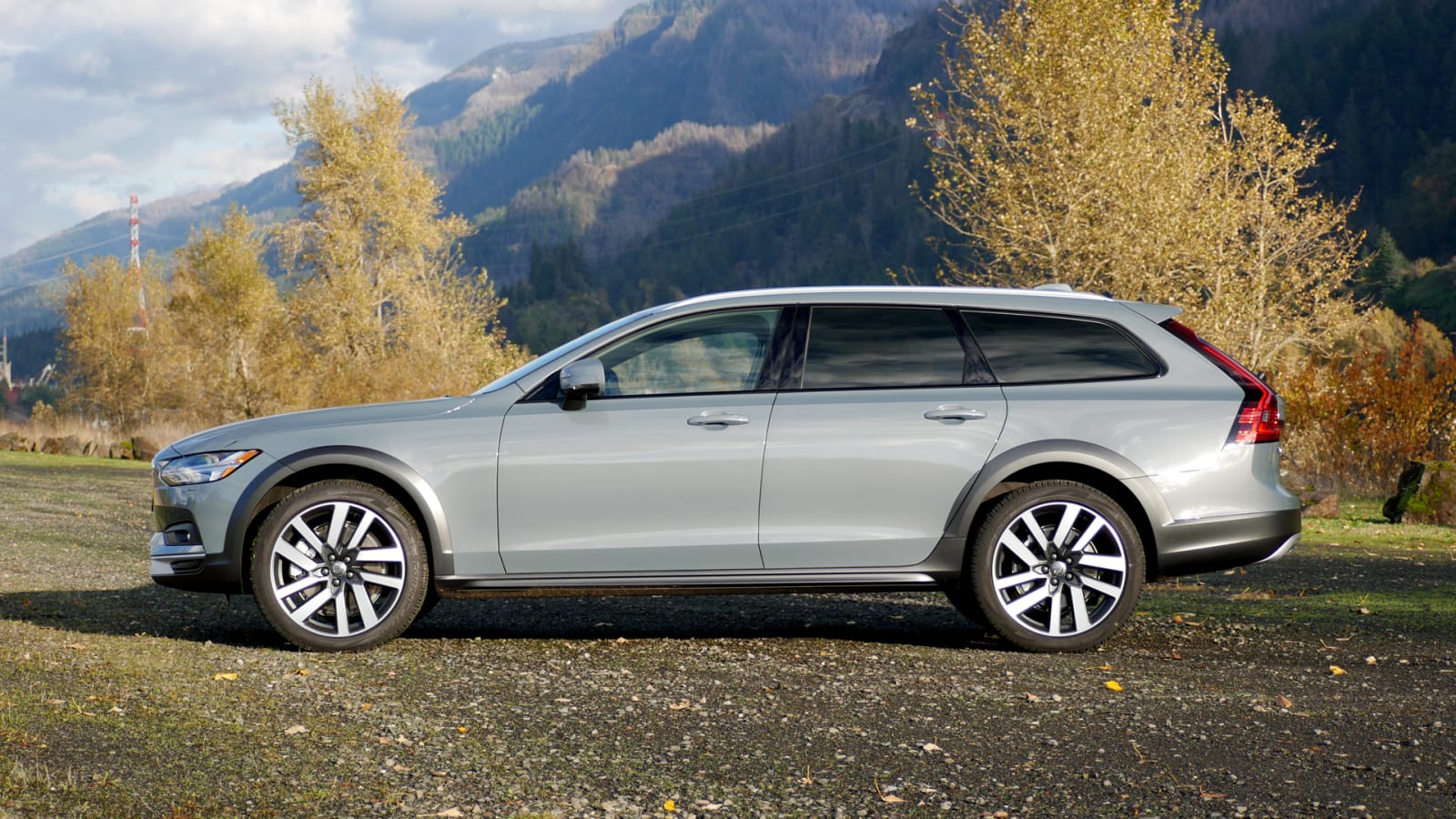 The Cross Country also rides better than the regular V90, although that judgment comes from past experience with a Cross Country riding on 19-inch wheels – this particular test car rode on 21's that should be avoided. There's no point in getting the cushier car and then ruining the ride by adding impact harshness with low-profile tires. That it still rides as well as it does is commendable, as big bumps are beautifully controlled by the optional air suspension. It's sharper impacts like pot holes or pavement patches that show the wisdom in going with smaller wheels/more sidewall.

Ah, but what about handling? I haven't driven the V90 siblings back-to-back to know for sure, nor the Cross Country with and without the air suspension. My suspicion would be that the air suspension makes more of a difference for handling, while the lower V90 would inherently handle better in general. That said, the differences are not that great. The Cross Country I tested wasn't some tippy high-seas adventure like a Subaru Outback. Oh, it pitches ever-so-slightly into corners, but it's controlled, and body roll isn't pronounced. The steering is precise enough with consistent, appropriate weighting that doesn't change much when in Dynamic mode. In total, I was able to maintain a decent clip on a tight, twisting mountain road, while being more confident than in a comparably priced luxury crossover. It may be a tall wagon, but it's still a wagon.

And like the regular V90, it's a pretty terrific wagon. The cargo area is vast and the low roof is ripe for racks. The back seat's leg- and head room are abundant and is as comfortable as it looks in pictures. It can also be outfitted with Volvo's unique integrated child booster seats, though installing a rear-facing infant seat was made difficult by the lack of middle LATCH capability and an unusual ramp-like element in the seat's aft portion. 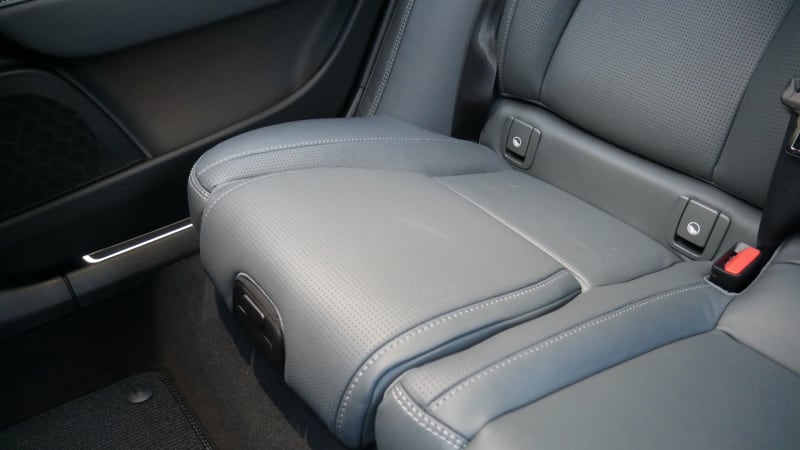 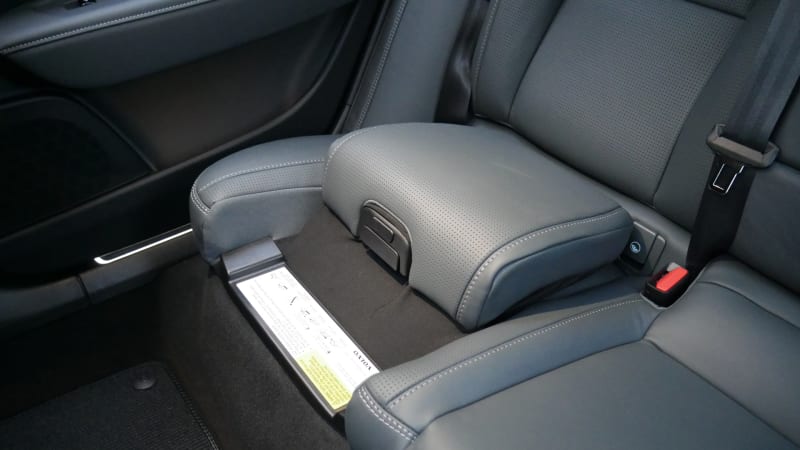 Up front, the available massaging seats are divine and the standard chairs not too far from heavenly, either. Materials quality is exceptional, including the open-pore wood trim and snazzy new blueish-gray Slate Nappa leather option that pairs beautifully with the also-new Thunder Grey metallic exterior you see here. I'm also a fan of Volvo's Sensus touchscreen, which has always made sense to me once I figured out where everything is and how to configure it to my tastes. It doesn't overwhelm like Mercedes MBUX or BMW iDrive can.

I will readily admit that the Volvo V90 Cross Country is one of my favorite cars. I dig the lifted wagon concept in general, but I appreciate that this particular one still adheres to the segment's functional principals. It's tremendously well-executed and looks sensational – no "for a family vehicle" qualifier needed. That it theoretically doesn't handle as sharply as the regular V90 is inconsequential to me: I'm not looking for my large Volvo wagon to cut a rug. I'd get something smaller and sportier for that, and would counter it's still better than (insert SUV here). 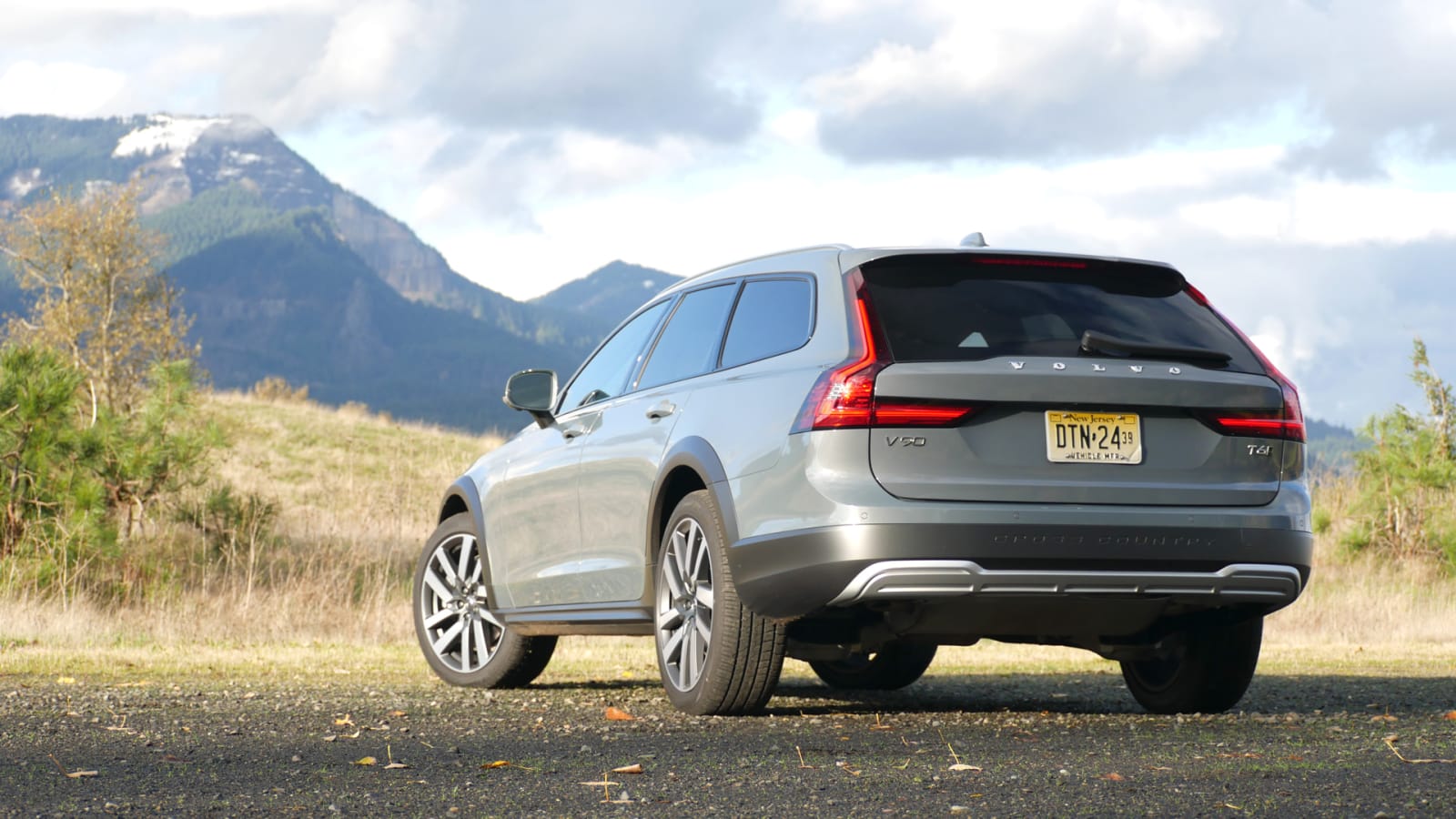 That all said, I'll go back to the beginning: It's great that Volvo still offers the regular V90 for those who disagree with me. Those who think that the lower look is better, that fender flares are ugly, and/or that the handling advantage will be more appreciated than the extra ground clearance. I would even offer that the V90 R-Design and its darker trim are much cooler than Zac's brown, chrome-clad Inscription, even if Volvo no longer offers it in super-cool Bursting Blue or Passion Red. I mean, if Volvo is only going to offer the regular V90 as a custom order, shouldn't it be available in whatever the hell you want?

At least you can get it in different flavors, with the R-Design and Inscription that start at the same $53,440 price, but differ in suspension tuning and the aforementioned trim types. They both offer the same choice of turbocharged T5 engine (250 horsepower and 258 pound-feet of torque) paired with front-wheel drive, or the "twin-charged" T6 engine (316 hp and 296 lb-ft) paired with all-wheel drive that starts at $58,795. By contrast, the Cross Country is T6 AWD only and starts at $56,540 with no trim levels. The price difference largely comes down to the regular V90 T6 AWD including the Cross Country's $2,800 Lounge Package as standard equipment (other optional equipment is basically identical). Equally equipped, the CC is $545 pricier.

That seems perfectly reasonable considering that the A6 Allroad and E 450 All-Terrain are a good $10,000 more expensive. They're more powerful to be sure, but again, they're also low-riding poseurs. And if you're going to get a lifted cladded wagon with a rugged name, get the real deal. 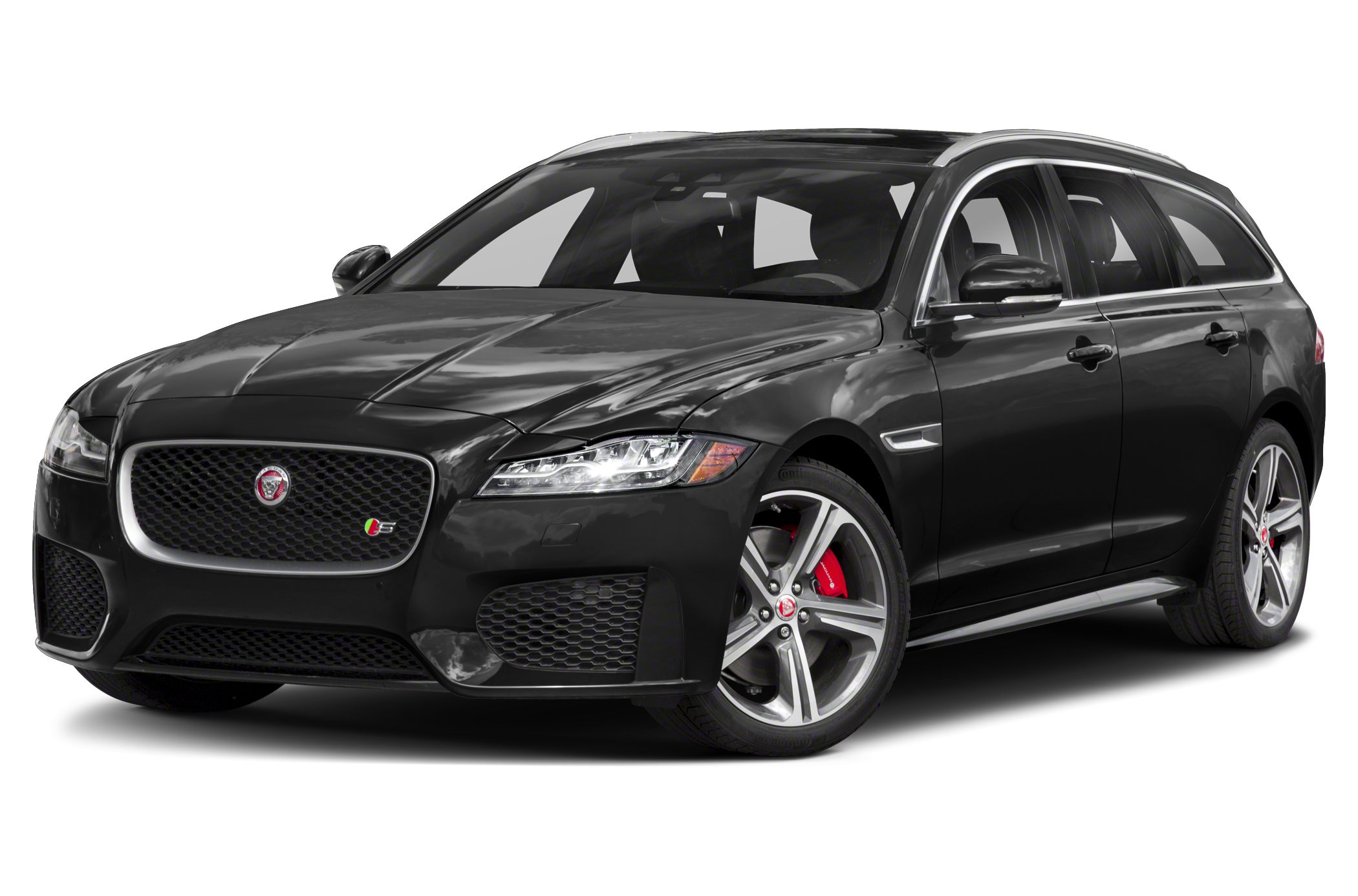 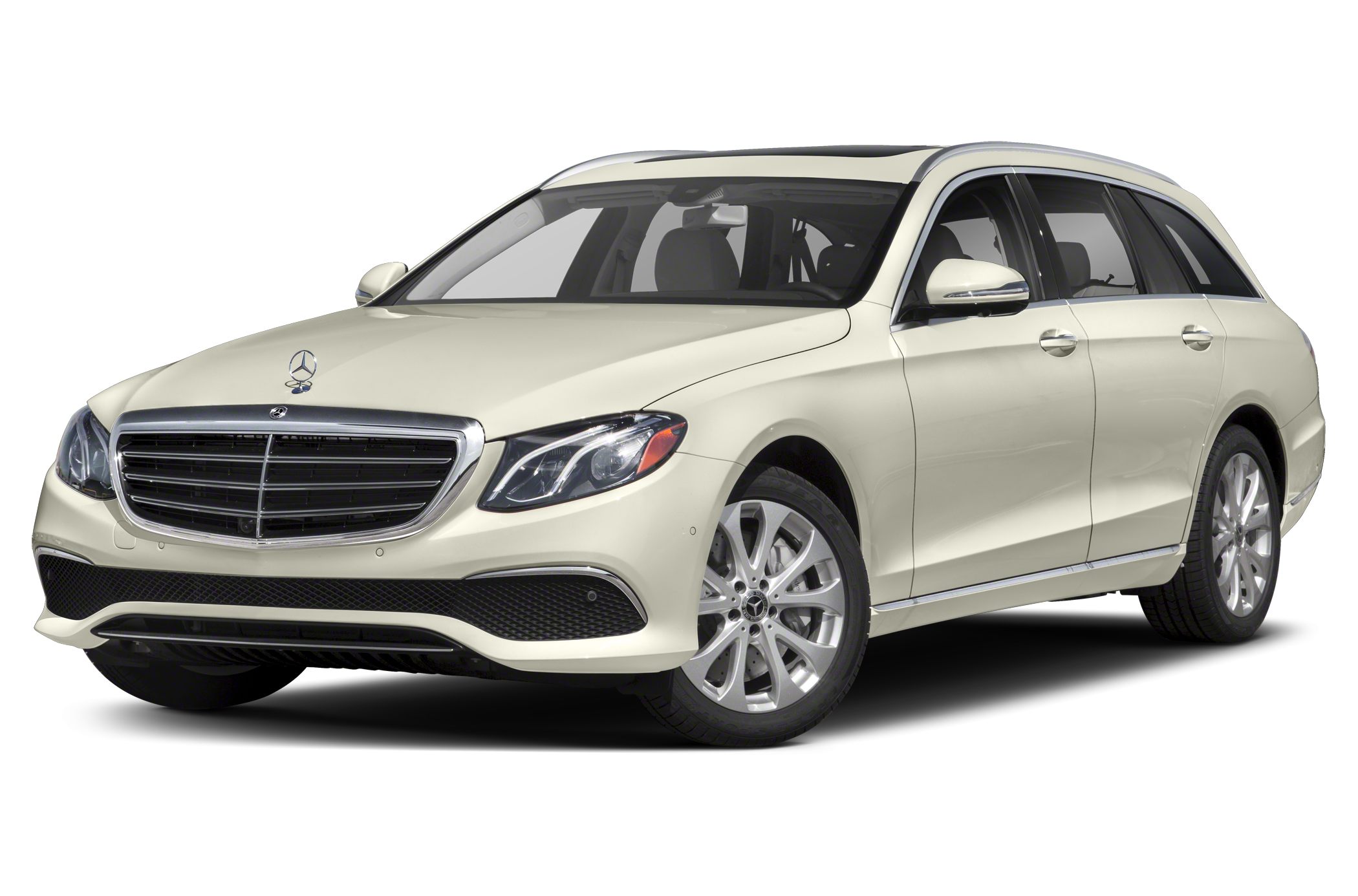 $1,992 - $1,992 Nat'l avg. savings off MSRP
See Local Pricing
I'm not in the market for a vehicle at this time. Please move this suggestion to the side for 30 days.
Huge Savings