One battery started a fire, another landed on a person's lap 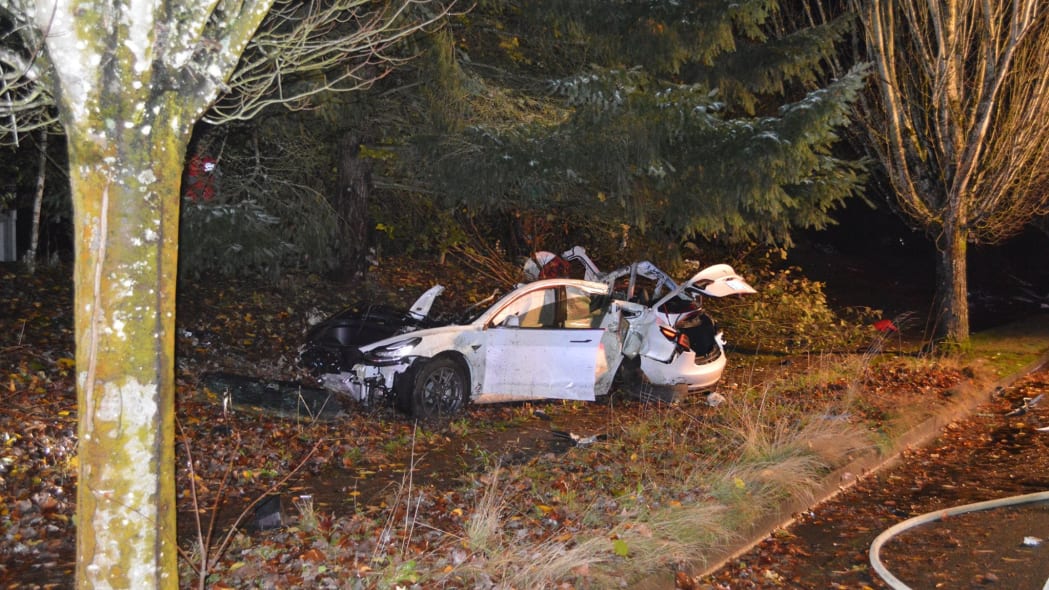 Residents of Corvallis, Oregon, are being asked to keep an eye out for battery cells ejected from a Tesla Model 3 that veered off the road at over 100 mph. Some of the cells catapulted from the high-voltage battery pack have already been found, including one that smashed through a window, landed on a bed, and started a fire.

One battery ended its flight on a person's lap.

Police officers explained the crash happened on November 17, 2020, at about 10:18 p.m. Investigators say the driver lost control of the Model 3 and broke — somewhat ironically — a power pole, knocked over two trees, and struck a telephone junction box before coming to a stop. He left a 300-foot-plus streak of damage and debris.

One of the 3's tires struck the second story of an apartment complex with enough force to break the water pipes embedded in the wall. One apartment's bathroom was destroyed, according to the Corvallis Police Department, and another was flooded. While that's hardly unusual in a high-speed accident, law enforcement officers added that the punctured battery pack scattered cylindrical cells like confetti as the car ricocheted off of the various obstacles in its path.

It sounds like none of the nearby residents showered by cells were seriously injured.

Photos taken after the crash show that the entire passenger side of the 3 was ripped off. The driver survived, miraculously. He fled on foot, was caught three blocks away, and was taken to a nearby hospital with minor injuries. After testing positive for cannabis, he was charged with a DUI, a hit-and-run, reckless driving, reckless endangering, and criminal mischief. The story didn't end when the wreck was hauled to the scrap yard, though.

Police officers spent nearly three hours cleaning up the scene of the accidents and picking up stray battery cells, according to The Drive, and they don't think they've found them all. Folks who live in the area are being warned that the battery cells can stay hot to the touch for up to 24 hours, can cause burns if handled without protection, can release toxic fumes, and can leak harmful substances. Police say residents who find a cell should report it to the Corvallis Regional Communication Center so it can be safely collected and disposed of.