It will compete in the timed Supercar Run this weekend 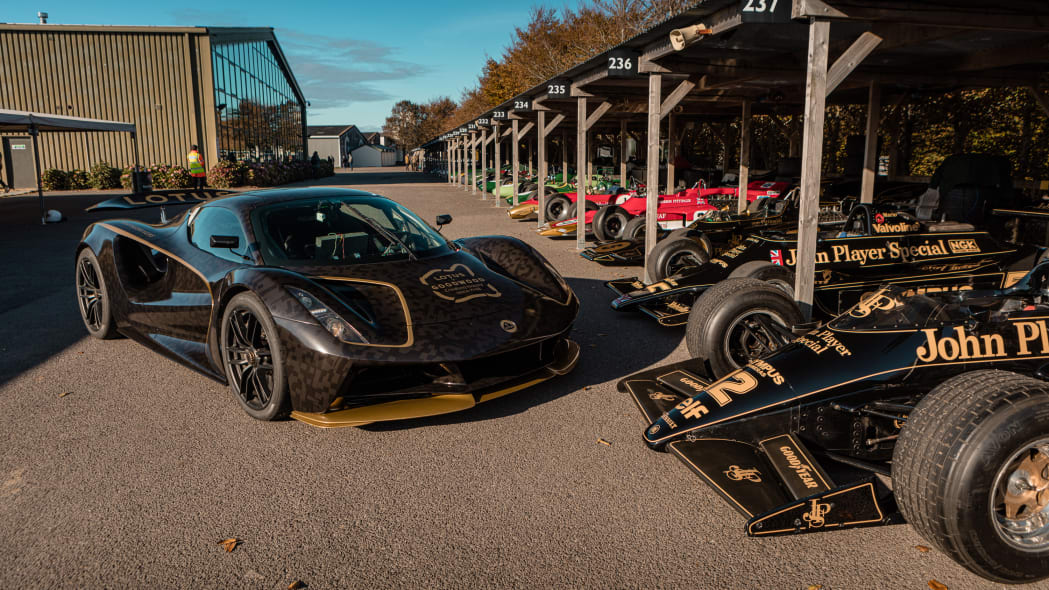 Goodwood SpeedWeek is here, and Lotus is using the event to highlight the upcoming Evija electric hypercar. Lotus is calling this the car’s “public dynamic debut,” which is relatively true, though the lack of a public audience at Goodwood does put a bit of a damper on the idea.

Regardless, the livery used to wrap the Evija is what truly caught our attention. For those familiar with Lotus racing liveries of the past, you’ll immediately recognize it as a modern take on the John Player Special livery. Lotus even photographed the Evija in this livery sitting next to a few old Formula 1 cars wearing the original John Player Special digs.

Black and gold just looks proper on a Lotus racecar, and it looks absolutely superb on the Evija, too. Since this is technically a dynamic debut, Lotus also gave us a short video that you can check out below.

The most intriguing part is the audio. Those electric motors are loud. It can’t come close to matching the yowl of a high output gasoline engine, but the Evija is clearly going to make its own dramatic, electric noise. That’s all well and proper, because extra theater is what electric cars typically lack.

In an adjacent news brief, Lotus detailed some of the things it did to save weight. Lotus believes that “Colin Chapman would agree the Evija is 100% a true Lotus.” To make it so, Lotus says the carbon fiber monocoque is extremely light, weighing in at just 284 pounds, contributing to making it the lightest electric hypercar when it comes out (not as though there’s much competition).

Using holes and free space contributed to the lightweighting efforts, too. The venturi tunnels through each rear haunch both save weight and produce downforce. The center console design and floating dashboard leave tons of empty space behind where weight would accumulate otherwise. Lotus’ crossbeam design for the dash helps it serve as a structural member and also houses the interior ventilation system, combining two elements into one and saving weight.

Lotus says you’ll be able to see the Evija attack the Supercar Run on SpeedWeek, where it will attempt to set a fast lap time against many other new supercars and hypercars.