The diesel is way cheaper and can tow more, but the same disappointing interior remains

The 2021 GMC Sierra 1500 and the Chevrolet Silverado 1500 are close siblings, and they’re getting closer every year. One of the Sierra’s previous standout features, the Multi-Pro tailgate, can now be found on the Silverado for 2021, providing even fewer reasons to choose the GMC instead of the Chevy. Really, if you’re looking at the more modest SLE and SLT models, the choice between the two largely depends on styling preference. The Sierra Denali is a slightly different story, as its available adaptive suspension is exclusive to GMC and notably improves both the ride and handling.

Of course, it still can't match the Ram 1500 in either regard, plus the Denali cabin continues to be a rather half-hearted attempt at luxury. Especially considering the genuinely high-lux offerings of Ram and Ford. The gap isn't so huge between the Sierra's lower trim levels and its non-Chevy competitors, but the cabin's design, quality and functionality still leave something to be desired. True, that often isn't a priority for truck buyers, but the Sierra isn't superior in enough other ways to balance it out. It's a capable truck with a compelling variety of powertrains, but it generally just doesn't go that extra mile beyond the competition as well as its Silverado sibling.

Changes for 2021 are mostly equipment-related, but there were some vital towing and pricing changes made for the new year, too. All 2021 Sierra 1500s come with a suite of new towing tech detailed here. New technologies include a trailer length indicator, jack-knife alert, trailer backup guidelines, and camera enhancements that include a rear side view and cargo bed view.

GMC expanded availability of the Multi-Pro tailgate, now allowing folks who opt for the lower SLE and Elevation trims to option it. The AT4 adds new Goodyear Wrangler Territory all-terrain tires and an off-road high-clearance step. Diesel buyers will be delighted to hear that GMC has lowered the price by $1,500 to $995, and raised the trailering capacity by 1,900 pounds to a more competitive 9,300. Maximum towing for the 2.7-liter turbo-four-cylinder is also up by 2,300 pounds to 9,200 pounds. GMC says the increase for the diesel is due to “better-than-expected rear axle durability,” and the four-cylinder is up because GM found the engine possesses “better-than-expected cooling performance.” 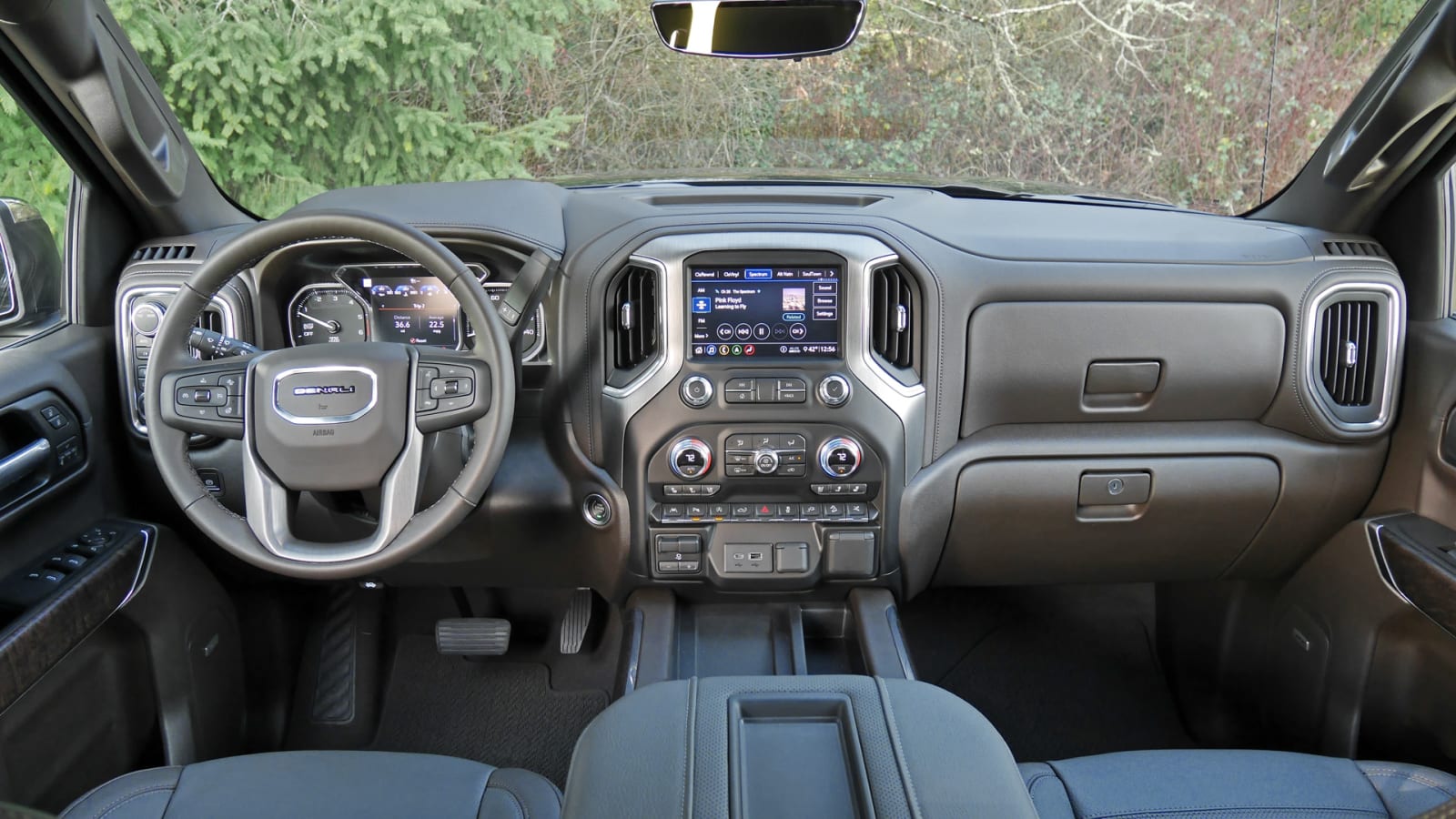 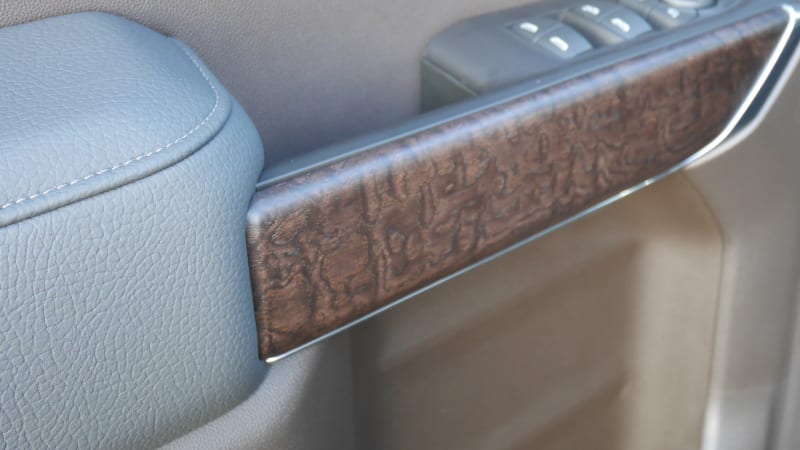 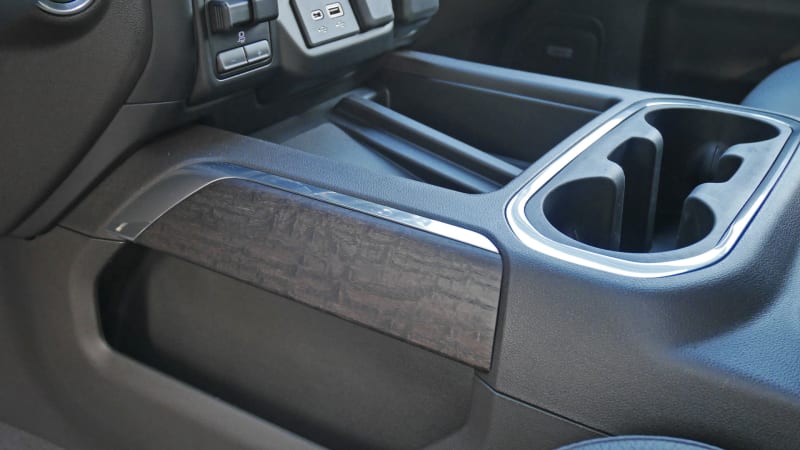 Like its Silverado sibling, the Sierra's cabin is its least compelling and competitive attribute, falling far behind the Ram 1500 and Ford F-150 in terms of quality and design. Looking at the interior from a pure functionality standpoint, the Sierra is perfectly fine at performing its truck duties. The seats are wide, flat and comfortable. It has huge armrests on both sides so you can stretch out as much as your truck stretches the boundaries of the road (seriously, this thing is huge). All the buttons in the center stack are well-labeled, easily found and big enough to stab away at without hitting the wrong one. It even has a volume and tuning knob.

Unfortunately, the dash is drab and frankly ugly in every trim level. The cabin is particularly damning in the Sierra Denali. Its black vinyl "stitched" onto the black dash and some token strips of wood trim slapped onto the center console and doors just aren't enough to create the sort of high-dollar ambience one deserves from its high-dollar price tag (and that truck buyers can find elsewhere). That might've been sufficient when the Denali was the only luxury truck, but not anymore.

At least the technology offerings are generous. All trim levels come standard with a touchscreen (8 inches on all but the base model), Apple CarPlay, Android Auto and a six-speaker sound system (two speakers with a regular cab), while the popular SLE adds OnStar and in-truck 4G LTE WiFi. Upper trim levels can add extra USB ports, various trailering apps and aids, multiple camera systems for parking and trailering, wireless smartphone charging and audio upgrades. 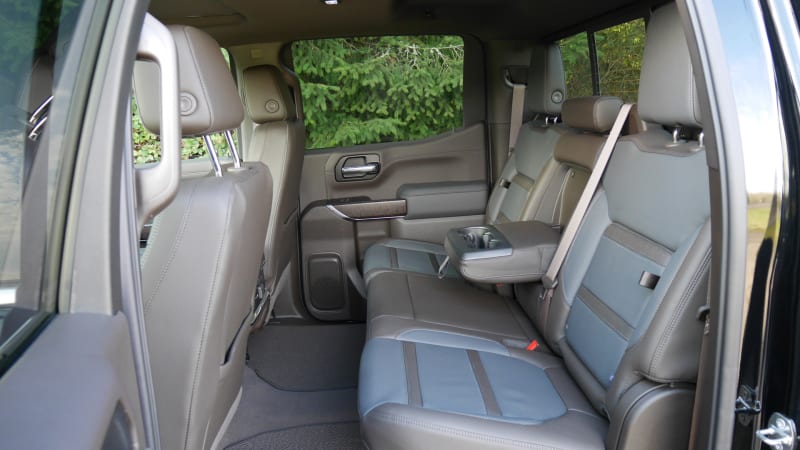 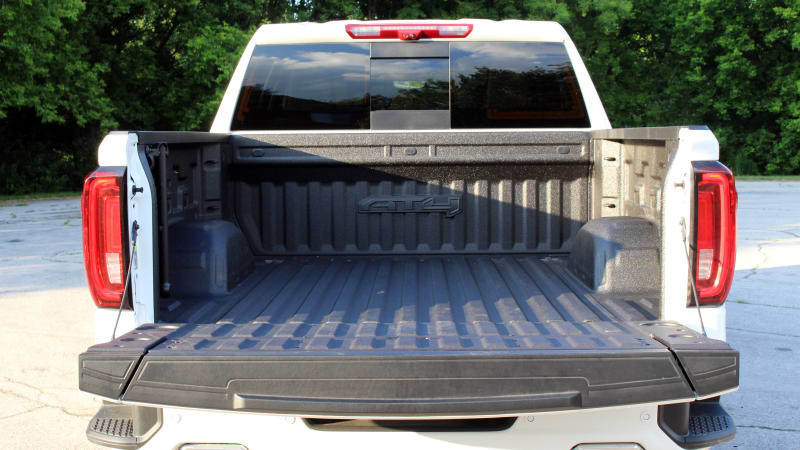 The Sierra 1500 Crew Cab, pictured above left, offers limo-like sprawl-out space in its back seat aided by a colossal rear door. As expected, the Double Cab's rear seatback is more upright and less comfortable (pictured above, right). Legroom may be class-leading, but it's still tight behind a tall driver, meaning the Double Cab's back seat is ultimately best suited for occasional use, or children. At least its front-hinged rear doors are a better setup than the F-150 Super Cab's annoying clamshells. As usual, you can get a three-person 40/20/40 split bench up front (all trims but AT4 and Denali) or bucket seats with a full center console (not available base or SLE).

What about the bed? The thinner, taller walls introduced for this latest generation have resulted in a bed that ultimately holds more than anything else in the segment. Better still, maximum payload ranges from 1,550 to 2,250 pounds, which is generally a few hundred pounds more than an F-150 or Ram 1500. Yet, there is more to consider with the Sierra's bed than just its volume and payload. For starters, it offers the MultiPro tailgate, which provides myriad configurations but chiefly provides a quick way to climb into the bed. You can even outfit it with a dedicated Kicker sound system, shown in the below gallery. But wait, there's more! The Sierra Denali and Sierra AT4 can be equipped with the CarbonPro carbon fiber composite bed that GMC says provides added "strength, durability and scratch resistance" to go with a potential 59-pound weight reduction depending on configuration. Basically, it's a bed and liner in one. 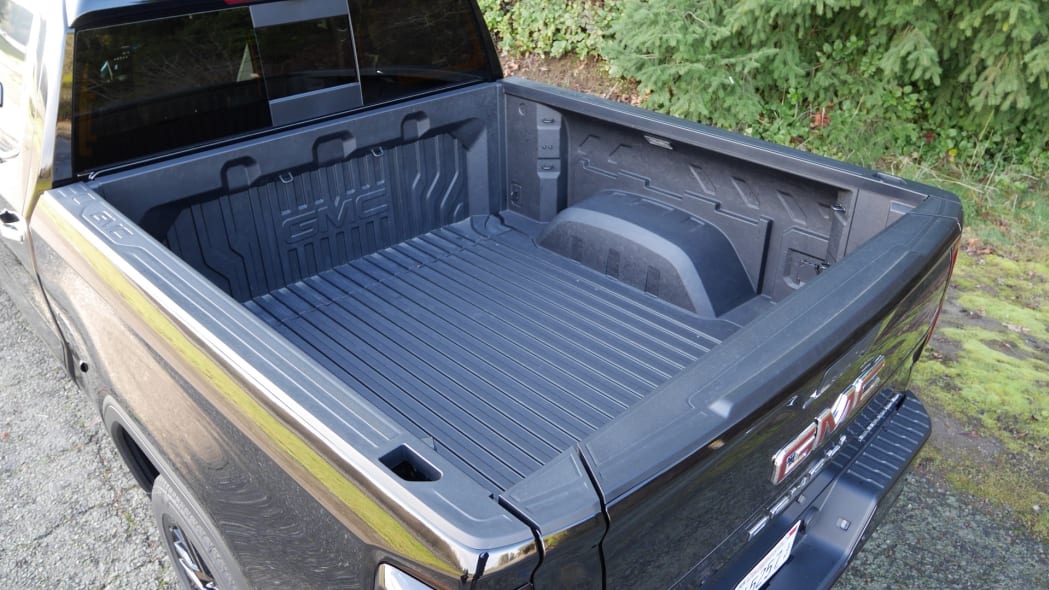 Standard only on the base trim is a 4.3-liter V6 that produces 285 horsepower and 305 pound-feet of torque. It comes standard with a six-speed automatic and Active Fuel Management (AFM) that shuts down half the cylinders to save fuel. All trims get 17 mpg in combined driving with this engine.

Standard on the SLE and Elevation (and optional only on the base truck) is a 2.7-liter turbocharged four-cylinder that produces 310 hp and 348 lb-ft of torque. It has an eight-speed automatic and also gets AFM (yes, it can run on two cylinders). It achieves between 19 and 21 mpg combined, which may seem like a minor advantage, but in terms of actual gas money spent, it could save as much as $400 per year over the V6. It's also the best fuel economy of any non-diesel full-size truck. Like every American full-size truck, the Sierra and Silverado's driving experience depends greatly on the engine you choose – and as GM offers more engines than anyone else, the spread of difference is even greater. We have yet to try the base V6, but we found the turbocharged four-cylinder to be as beefy and efficient as advertised, easily assuaging concerns that you can't put a four-cylinder in a full-size truck. Still, we think that it represents questionable value relative Ford's small turbo V6 and Ram's mild-hybrid V8. A better power/fuel economy proposition is the new Duramax diesel engine – its torque matches the big 6.2-liter V8, its fuel economy will be vastly superior and it's shockingly quiet. It's definitely worth strong consideration.

But we're guessing most Sierra buyers will be looking at a V8. In that case, we've found that 6.2-liter is obviously stronger than the 5.3-liter truck, but you also don't strictly need it. We've towed hefty loads with both, and the 6.2-liter is more an example of overkill than necessity.

To this point, however, everything we've written also applies to the Silverado. The Sierra's breadth of driving experiences is actually even greater due to the Denali trim's adaptive dampers that provide superior ride and body control to the standard suspension. We've noted in separate Silverado/Sierra trucks have a tendency when driving over imperfect pavement for either punishing harshness (big wheels) or unusually nautical bounding (small wheels). Neither occurs with the more civilized, big-wheeled Denali. If you're looking for a reason to choose Sierra over Silverado and have the money for a big-dollar truck, this is it.

What more can I read about the GMC Sierra 1500?

We test the off-road-oriented Sierra AT4 when equipped with the 6.2-liter V8 and Dynamic Fuel Management. Our first drive of the Sierra Denali, including more in-depth information about its design and engineering. 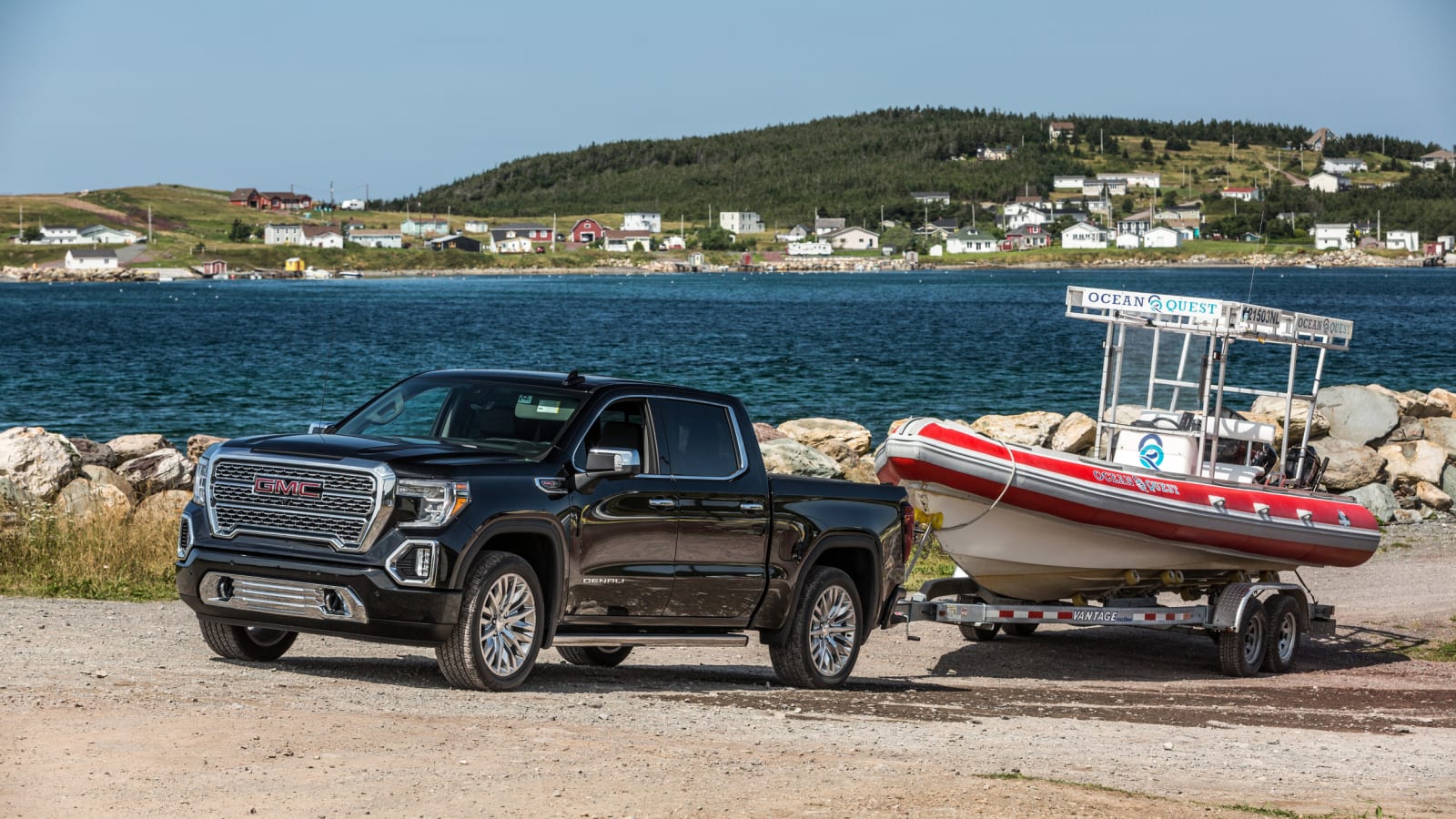 Our detailed interior walkthrough and review of the Sierra in its off-road AT4 trim. 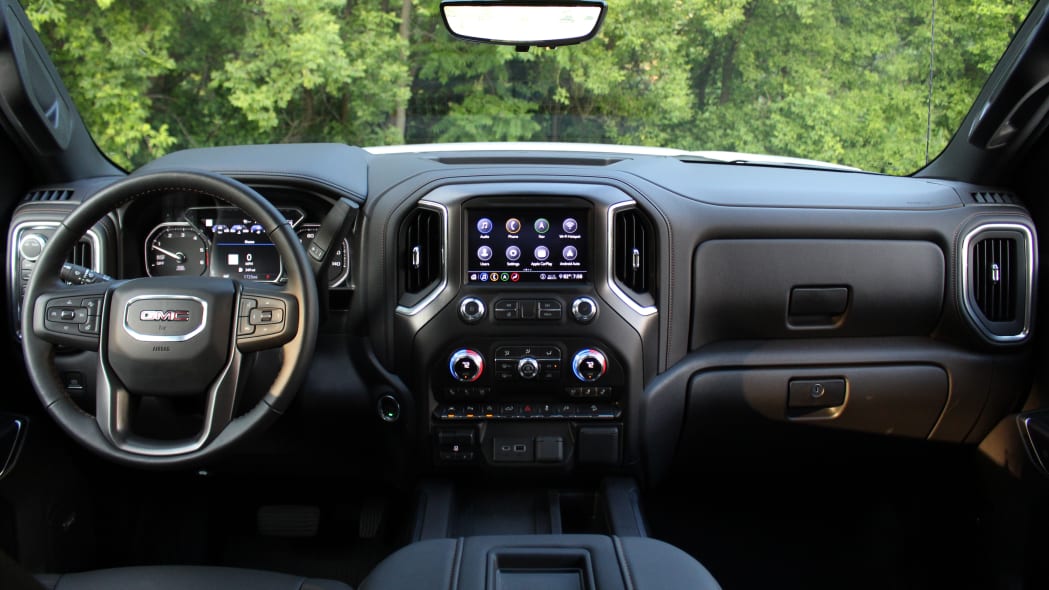 The 2021 GMC Sierra 1500 is available in regular cab (base trim only), the extended Double Cab and Crew Cab styles as well as three bed lengths and two front seating options that result in max seating for five or six. Available trim levels are base, SLE, Elevation, SLT, AT4 and Denali (Crew Cab only).

Pricing starts at $31,295, including the $1,595 destination charge, but as that's for a regular cab base model, it's almost irrelevant for most truck shoppers. Really, things start off with the SLE Double Cab for $41,995.

A complete breakdown of specs, features and local pricing of each trim level can be found here on Autoblog. However, it should be noted that the AT4 is the off-road-oriented model that we featured here, while the Sierra Denali is the range-topping luxury-oriented model available with every convenience and indulgence feature in GMC's toolbox.

Forward collision warning, low-speed automatic emergency braking and lane-keeping assist are only available on the SLT, AT4 and Denali trim levels. Blind-spot and rear cross-traffic warning are optional on all trim levels but Denali, where they are standard. A variety of camera systems and other technology features are also available to improve trailering, both in terms of ease of use as well as safety.

The Insurance Institute for Highway Safety gave the Sierra 1500 Crew Cab the highest possible rating of Good in all crash categories but the new small overlap front-passenger test where it got a Marginal (third of four) score. It also got a Poor headlight rating, but a Superior rating for its optional forward collision warning/prevention system. The National Highway Traffic Safety Administration gave the Sierra Crew Cab a four-star overall rating. Its breakdown of crash tests saw mostly four-star ratings for frontal crashes and the rollover test, it received five-star ratings for all side crash tests.

$1,278 - $3,775 Nat'l avg. savings off MSRP
See Local Pricing
I'm not in the market for a vehicle at this time. Please move this suggestion to the side for 30 days.
Huge Savings